Strangers in a strange land

A Thai movie about a Rohingya refugee won a major prize at the Venice International Film Festival. We talk to the director about his work and the thorny subjects of identity and border

In a quiet fishing village in the South, an unknown man is found in a forest. He has no identity, neither name nor voice, and a young fisherman takes him in.

From his looks and from the context, it's likely that the man is a Rohingya refugee, perhaps having fled across the border and finding himself on this shore.

The Thai film Kraben Rahu (Manta Ray) trains a poetic look at the void of humanity through the story of two men, a Thai fisherman with peroxide blonde hair and a nameless stranger stuck in a foreign land. The film, directed by Phuttiphong Arunpheng, has just won Best Film in the Orrizonti section of the Venice International Film Festival, a major award at the world's oldest film festival. The film continues to garner a strong international profile and is now showing at Toronto International Film Festival, the biggest film event in North America.

The title is enigmatic and unusual for a Thai film. "I dive and I often see manta rays underwater," says Phuttiphong, a seasoned cinematographer who takes up his first directorial effort. "It's a creature that swims around all waters and doesn't belong anywhere. It has no concept of borders."

Borders, belonging and banishment are the issues in Manta Ray. Though all signs point towards the stranger being a Rohingya, Phuttiphong said he didn't specifically want to discuss the plight of any ethnic minority and instead to ponder the blur of identity and nationality. One of the reasons the film is gaining traction internationally, especially in Europe, is its topicality on the issue of migrants, displacement and the refugee crisis.

Phuttiphong spent over eight years trying to get the film made. He spoke to us about Manta Ray, cinematography, the Rohingya, and the intense distrust of many Thais towards the brown-skinned refugees.

The film centres on two characters, a Thai fisherman and a mute stranger with neither name nor speech. Given the context, it's pretty obvious that this man is a Rohingya refugee, although there's nothing in the film to confirm this reading.

When I wrote the first draft of the script many years ago, the Rohingya issue wasn't in the news at all, and I hardly knew anything about the ethnic minority. Back then, I was working on video art that looked at the question of identity and especially at the way artists found their identity through their works. From that starting point, I began to contemplate more about other implications of the term 'identity': self, border, ethnicity, nationhood.

After 2010, the Rohingya began to appear more in the news. But still, my interest in the problem of identity has remained on the abstract level -- it's not a specific concern about any group of people, or about the past or the present in particular, but about the question of history, prejudice and the fact that we know so little about other people.

So you didn't do any specific research on the Rohingya?

Not really. However, the Rohingya crisis in Myanmar concerns Thailand since many of them have fled across the border or been smuggled by boat to the southern part of the country. What shocked me greatly was when some of my friends became angry and even spread hate speech when they knew that Thailand might shelter some of these Rohingya refugees. I mean, it's normal for a lot of Thais to look down on people from our neighbouring countries that we regard as 'inferior' to us -- but it's just harmless arrogance in most cases. With the Rohingya, it's different, because the hatred and the racism are extreme and real. I don't know what to make of it. I know some people who used to criticise the Nazis and ethnic cleansing, but now they're the ones who can't stand the Rohingya.

Have you wondered why some of us feel such antagonism?

Maybe because we don't know enough about these people. Their history has been hidden, buried, or ignored [by their government]. We don't know them or what they have had to go through over the past century or so. And the fact that we know so little about some groups of people can be dangerous.

Manta Ray is more or less a continuation of your 2015 short film Ferris Wheel, which also deals with migrant workers and the porous border between Thailand and our neighbours.

Yes. It all began, I think, in 2010 when I was on a road trip with my family to the North of Thailand. We went to Mae Sot, a bustling border town populated by Thai and Myanmar people. I drove around and I came to a small river, which marks a border between the two countries. I saw a boy playing in the river, and soon he called out to another boy who was on the other side of the shore, and he came down to play with the first boy. They were friends, I was sure, from the two sides of the river. And I thought, it's Myanmar just over there, and there's basically no border, no line that separates the two places. That image stayed with me for a long time.

My original script, which was called Departure Day, had two parts: the first is about a migrant worker from Myanmar who slips through the border into Thailand, and the second takes place in a fishing town and concerns the search for a true identity of a mysterious man. The first part became Ferris Wheel, and I've expanded the second part into Manta Ray.

The stranger in the film doesn't speak. Why is that?

Because he represents a people whose voice we've never heard. I decided to make him a mute to erase his identity almost completely -- we can't guess who he is from the language or the way he speaks. It's also a question of plausibility: if I let him speak, then which language? I don't want him to speak Rohingya because the film doesn't want to specify who he is. And if he speaks Thai, what kind of Thai? In the film we only hear him make a throaty sound.

How does your career as a director of photography influence your work as a director, especially in this first feature film?

Because I'm a director of photography by training, I'm not confident when I have to tell a story through words, dialogue or other devices apart from the cinematography. Manta Ray is driven by visual and sound; it works almost as an abstract piece, or it's like instrumental music.

And because most of the films I've shot in my career are low-budget films, I was trained to improvise and to adapt to the situation. I didn't have the luxury of being able to design everything in advance and hoping it would turn out as I had envisioned; instead we would go to a location and see what we can do about it. So most of the films I shot tend to have this documentary look, something slightly spontaneous, and it's the same in Manta Ray.

But at the same time, Manta Ray has a distinctive visual style. What did you have in mind as you and your director of photography went into the shoot?

The idea is to film the characters through a telephoto lens. We wanted them to be seen from a distance and never from up close. We also aimed for the rough and tough realism -- maybe because I've shot many commercials and those jobs demand me to be meticulous and over-the-top, so I wanted something opposite in my own film, something raw and unembellished.

The script of Manta Ray is very slim, perhaps only 30 pages. That's because I was confident that my crew and I could create something on location -- we used the script as a guideline and we could adapt to what he had in front of us. The visual style also reflects this. 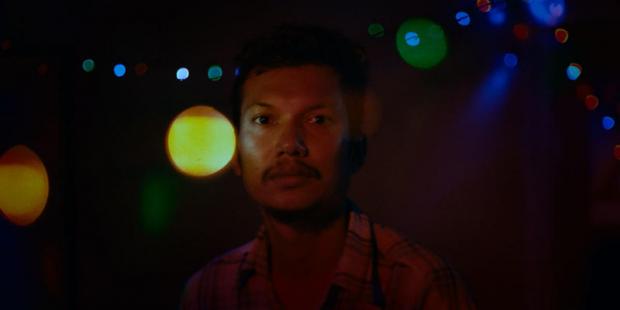