Takin' it to the streets
Life
Arts & Entertainment

Takin' it to the streets

London's graffiti-art haven Graffik Gallery is now in Bangkok, and there's no middle ground. Only edge

It's an exciting time for the graffiti and street-art enthusiasts of Thailand. Banksy, Mr. Brainwash and Dotmaster have finally landed in the Kingdom.

Graffik Gallery, one of London's most renowned street-art destinations, has opened its Bangkok offshoot right in the heart of Thong Lor, bringing in the works of street-art giants like those mentioned above to mingle with talented local stars like Headache Stencil, Alex Face and NEV3R.

Inside the sun-drenched gallery are humorous, vibrant and political works like Headache Stencil's mini-statue of what looks like Prime Minister Prayut Chan-o-cha in Colonel Sander's white KFC suit; Banksy's dark and satirical take on the Tiananmen Square's tank man; and Catman's The Usual Suspects, wherein Picasso, Basquiat, Dali, Warhol and Keith Haring are standing in a police line-up.

Located inside a corner shop in Chaem Chan alley, passersby can't help but stop and take a snap of the vibrant artworks, since it's not every day you'll get to see some of the best street art indoors.

"In terms of art on the street, [Bangkok and London] are very similar," said gallery owner Oliver Cox, who started out as a collector himself before opening Graffik Gallery. "There's a lot going on in London and in Thailand. But in terms of galleries, there are many street art galleries in London already and many collectors, but Thailand's just starting with galleries and new collectors. 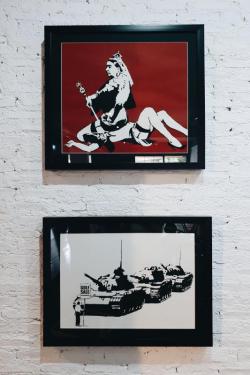 "The artists paint on the street, and this is an opportunity for them to make some money -- because they paint on the streets for free. This is a way of showing their street art in a gallery and they can sell it. Also, for the people who love street art, they can take it home and put it in their house, so both sides [benefit], really."

The gallery in London, based on Portobello Road, has been the centre for extraordinary graffiti and street-art exhibitions and workshops for over a decade. They've hosted Alec Monopoly's first London solo show, Dotmaster's High Class Trash show, and have a whole separate section which stores works by Banksy. Sadly, Cox doesn't know Banksy personally; he gets the artist's works through auctions, dealers and established collectors.

Having visited Bangkok a lot to buy street art from the likes of Alex Face and NEV3R for his London gallery, Cox was impressed by the popularity of the art form, which neighbouring countries haven't seemed to tap into yet.

With plans to have an exhibition every month, there are already five to six artists that have been lined up to do solo exhibitions at Graffik Gallery.

"Do you know NEV3R?," Cox asked. "He's the first one we'll do a show with ... [Headache Stencil]'s gonna do a show in December ... [And] we plan in February to do a big Banksy show here ... I think it's quite exciting for Thai people to see a new type of art added to their collection." 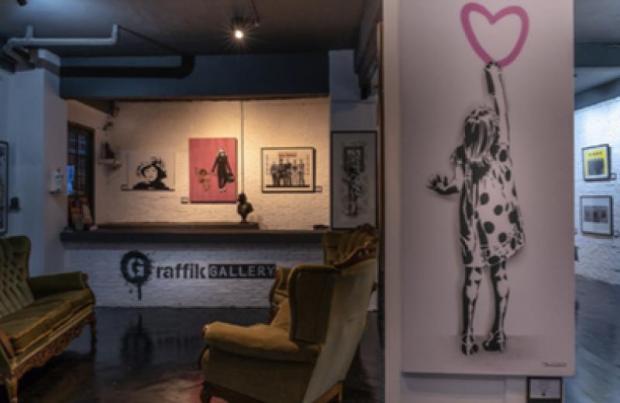