Tensions were running high last Wednesday at the Bangkok Art and Culture Centre (BACC) as hundreds of concerned artists, art enthusiasts and press dropped by to listen in on the news conference about the fate of the country's biggest public arts centre.

Inside the first floor multipurpose-hall-turned-conference-room, BACC director Pawit Mahasarinand, together with Assoc Prof Alice Tienprasert, Bangkok Art Biennale's chief executive along with artistic director Apinan Poshyananda, and Bangkok Theatre festival director Pradit Prasatthong, laid down information on the BACC's budget issues, its impact on working conditions and events, and what preliminary steps to take in order to let the centre run as smoothly as possible despite its seemingly impending doom.

The Artist's Network, made up of veteran artists, were there to show support. They were wearing black, waving protest signs, and handing out their open letter to Prime Minister Prayut Chan-o-cha criticising Bangkok governor Pol Gen Aswin Kwanmuang for his destabilising move on the art centre.

"I don't mean to be dramatic, but we just received this this morning," Pawit said to the attentive audience as he held up a notice by the Water Supply Authority. If the BACC isn't able to pay the 47,783 baht water bills from the last two months, chances are there will be no more running water within the building. They're running low on money and are considering cutting opening times from 10am to 9pm to 11am to 8pm, and many planned shows and workshops were shortened as well.

For almost a decade, the government has been providing slightly less than 50% of the BACC's budget per year, with the rest of the money coming from the art centre's businesses, rental and parking fees.

Yet over the past two years, the Bangkok Metropolitan Administration (BMA), under junta-appointed Pol Gen Aswin, has denied the BACC 80 million baht of support, citing that it may not be legal for the BMA to budget the BACC. 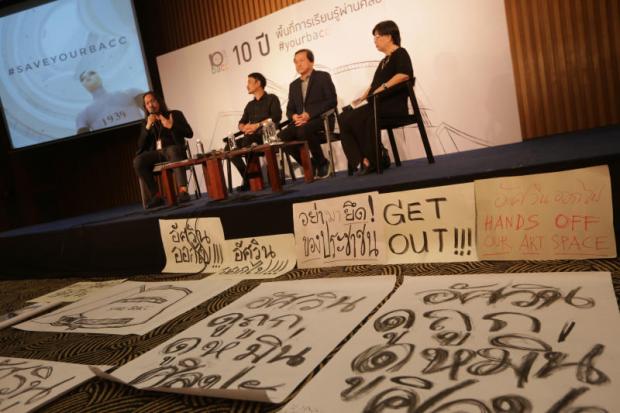 Things got even stranger this past May when the BMA signalled that they wanted to take over the BACC, with a plan to turn it into a co-working space. The announcement sparked protests, resulting in the governor backing down and announcing that the BACC Foundation (consisting of leading artists, academics and businessmen) would run the centre as usual. Yet City Hall seems to be pressuring the BACC, and just last week Pol Gen Aswin picked a six-member team of advisers to choose the BACC's new board of directors. Three of the advisers are high-ranking generals in the army and navy, two are from the BMA, and one is an artist/professor from Silpakorn University.

With the three panel speakers talking for an hour on budget cuts, how to accommodate artists with possible power and water shortages, and asking for the public to donate money through their official bank account, the main question that remained unanswered to everyone was: "Why is any of this happening in the first place?"

LIFE talks with a few artists and activists who attended the event for their thoughts on the issue.

I'm also a manager of an arts centre and I've worked with it for 40 years without funding. I was able to depend on myself by relying on myself. Pawit will have to learn how to do that. And whatever we want to give to the community, whatever beautiful things we want to present on a national level, it is tiring. It's like carrying a mortar up a mountain. But this mortar is a quality one. We have to carry it up there, and it's normal to feel tired.

To let people see the value of art, artists must know the art of invitation. Thai people are surrounded by art, especially those in the provinces; they see art around them all the time. We cannot insult them. We have to love them if we want them to see new and interesting things. If we invite them in order to see something new, strange and exchange knowledge, it'll be beneficial to their livelihood.

A lot of young people have a chance to expand their worldviews here at BACC. I'm an artist but I wasn't educated abroad. I didn't have many opportunities to visit museums or galleries in foreign countries to see important works, so BACC was my education. The People's Gallery, as the name suggests, is where many young and unknown artists had their first shot, myself included, and that's why a space like the BACC is extremely important to the development of our art scene here.

The BMA has many other more pressing problems to solve. I don't know why they want to step into art management, which is clearly something they have no expertise in. Their conservative attitude won't be compatible with the contemporary art world.

The government see us as termites. What we're doing is letting this place -- which is the wisdom of the country -- become more developed and sustainable. But the government doesn't like that. They want to get rid of it and find a reason in order to change.

Our country is overflowing with so many different types of art, but why is it so scattered? And why is no one really taking care of any of this? We've done this because we see the benefits that these places give towards the country and the public. The artist's aren't arguing with the governor, but just the one thing that the governor did. It's childish. It's like someone stepping on us and while saying 'nothing's happening'. Today's gathering was to tell people what happened with the BACC, and the Artist's Network feels that it's such a shame that we have to even fight about this conflict.

The things happening at the moment reflect that the government is scared of artists. But why would they be scared of artists if they have everything already? They don't have to be afraid [laughs].

They're afraid because they cannot control the artist. Artists have a mind of their own and they're not able to instruct artists to turn left or turn right. And this is the heart of democracy, which is needed for the people to show their opinions, and in this democratic process we become stronger.

Am I saying that it's the handiwork of the junta? I don't want to conclude that yet. But what the governor is doing is aiding that -- he wants to turn the art centre into a co-working space, which is not what it was intended for.

[In order to help out] come together and express your opinions through whatever media you have in your hands. Come be a part of the movement by, for example coming by or donating to make people see that the people support the art centre. 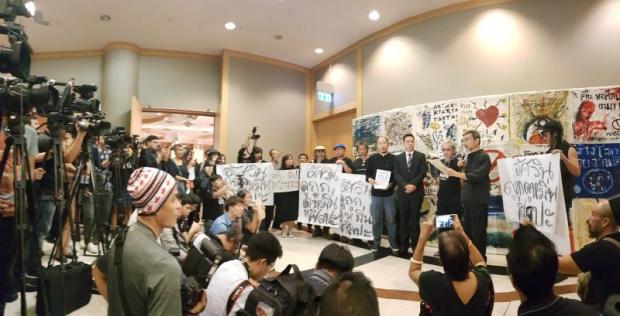 Activist-supporters of the Bangkok Art and Culture Centre present an open letter to Puthipong Punnakan, deputy secretary-general to the Prime Minister's Office for Political Affairs. Puthipong dropped by upon the order of Prime Minister Gen Prayuth Chan-o-cha to 'help reconcile' the conflict between the BACC and BMA. Photo: Apipar Norapoompipat