The many interpretations of bliss
Life
Arts & Entertainment

The many interpretations of bliss

With the monsoon comes the art. With the wind and bluster come the artists. Here it is, finally, after a year of fanfare and preparation. The first Bangkok Art Biennale 2018 (BAB 2018) will open on Oct 18 and run until next February in a city-wide surfeit of artistic affairs, from exhibitions to talks, workshops to pool parties (which is, of course, art!). The programme will keep Bangkokians and visitors busy for months starting from next week.

To recap: 75 artists, Thai and international, spread out over 20 venues (from temples to malls). Superstars -- Marina Abramovic, Yayoi Kusama, Yoshitomo Nara, Elmgreen & Dragset, etc -- are showcased alongside young and lesser-known Thai talents. Expect spectacles, such as monumental sculptures or inflatable thingamajigs, as well as experimental pieces in contextualised environments.

The theme conceived by BAB's chief artistic director Apinan Poshyananda, working with his team of curators, is "Beyond Bliss". The endless possibility of interpreting that phrase, in essence, is what Apinan sees as the gist of this biennale. 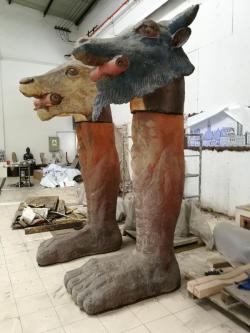 "Beyond Bliss sounds paradoxical," says Apinan. "What's beyond bliss? Perhaps chaos, perhaps nothingness. In that continuous dissolution, how can artists show us the paths? Bliss doesn't always lead us to something nice and fun. It can be dark and uncertain."

At a time when art is under pressure -- the Bangkok Art and Culture Centre, one of BAB's main venues, is facing budget constraints -- BAB, which runs almost entirely on private sponsoring, is throwing down the gauntlet by staging a vast, diverse and seemingly expensive show that aims to touch all bases (education, tourism, art, politics, transcendence) and that invites everyone in for free.

We'll have more coverage on some of the artists and shows once the event begins. For now, let's take a brief look at some of the venues and highlights of the upcoming Bangkok Art Biennale 2018.

One of BAB 2018's challenges is to put contemporary art in historical sites. At the Temple of Dawn, landscape artist/designer Sanitas Pradittasnee will turn the temple's khao mor -- or the rock garden symbolising Mount Semeru at the centre of the universe -- into an installation piece that utilises the interplay of sunlight and mirrors. Sanitas is a well-known architect who has designed several community-based structures, and her delicate touch will be much treasured at this site. On the other hand, Komkrit Tepthian will present Giant Twins, a playful twist on the ancient myth of the two guardian ogres of Wat Arun and Wat Pho -- this time with Lego bricks.

The Sino-Thai history of Wat Pho is a wellspring of many interpretations undertaken by various artists at BAB2018. Chinese artist Huang Yong Ping, famed for his monumental sculptures, will lead the charge here with sculptures of giant feet topped with the heads of mythical creatures -- the artist is said to be impressed by the centuries-old murals of the temple painted in the reign of King Rama III by craftsmen from Fujian, China, which is also Huang's hometown. Meanwhile, Thai designer Jitsing Somboon has fashioned a clothing item to be distributed to all visitors to the temple -- imagine when you're wearing shorts to a religious site and the staff ask you to cover up -- that plays with the theme of faith. Expect a lot of Chinese tourists walking around in Jitsing's still-not-unveiled apparel. This beautiful temple on the Thon Buri side will play host to various artists who explore the theme of spiritualism. The temple's sermon hall will host Montien Boonma's legendary piece Zodiac Houses, created when the late artist was working in Stuttgart and fascinated by church architecture. Thai artist Torlarp Larpjaroensuk will complement that with his Spiritual Spaceship, an installation through which he tries to establish a connection with his dead grandmother. Another Thai artist at this location is Arnont Nongyao, who will present a light-and-sound piece called Chat Naa (or Next Life) -- a work fit for a handsome temple.

Wat Prayoon is world-famous for its ivory-white pagoda that earned Unesco's conservation prize in 2014. On its base is a row of repositories where ashes of the deceases are stored. Here, Nino Sarabutra will pave the ground with a hundred thousand tiny ceramic skulls in a work collectively known as What Will We Leave Behind? Step on them, but do not steal them.

She will be here. The biggest name in the roster of BAB, Marina Abramovic will be in town to give a talk on Oct 23 -- that will be a hot ticket -- and her sculpture will be on show at BAB Box at the site of One Bangkok, on the corner of Rama IV and Witthayu. And yes, according to BAB chief artistic director, it's likely that she will restage a version of her famous The Artist Is Present, which involves a staring match with the artist herself. In addition, the Marina Abramovic Institute (MAI) will present long-durational performance by eight artists. For eight hours straight every day for three weeks, each artist will perform a variety of persistent and sometimes gruelling acts, without taking bathroom breaks. The venue is the Bangkok Art and Culture Centre.

The embattled Bangkok Art and Culture Centre proudly marches on, and it will be a central venue for Bangkok Art Biennale 2018 with over 20 artists occupying different rooms and floors of the building.

Upon entering the premise you'll be greeted by Choi Jeong Hwa's five-storey-high installation piece made up of hundreds of brightly-coloured shopping baskets stacked upon one another. But in fact, a piece that will draw your attention before entering the building is a piece by Sornchai Phongsa, a Thai artist of Mon origin who will present the story of migrant workers here.

Inside the BACC, various artists, various temperaments and media collide. Firoz Mahmud, a Bangladeshi artist, will look at the plight of the Rohingya through photography and installation pieces; that will be complemented by Jakkai Siributr's textile work, also about the Rohingya. Filipino Mark Justiniani will conjure up a mirror house on the ground floor, a work that's supposed to refer to his country's martial law era. Veteran Thai artist Chumpon Apisuk will present a video work dealing with the subject of migrant sex workers.

Besides big names, BAB professes to give a platform to young and often overlooked artists. At BACC, five female Muslim artists from the deep south, known collectively as the Muslimah group, will showcase a series of work inspired, naturally, by the situation in their troubled region.

Large-scale sculptures, video art, paintings and even a pool party -- the Charoen Krung area will become a concentration of artworks, namely at East Asiatic Company building, Mandarin Oriental Hotel. The Peninsula Hotel, OP Place, the Jam Factory over on Thon Buri side, and the Bank of Thailand Learning Centre, further upstream. The idea is for visitors to walk around admiring different pieces and exhibitions, then take a boat ride upriver to other venues as mentioned above.

The duo from Berlin, Elmgreen & Dragset, will unveil their piece called Zero -- a giant pool-shaped sculpture inspired by, it was said, Van Gogh's severed ear. It will be placed in front of East Asiatic Company and function, for one day, as a venue for a pool party. French artist Aurele will have a dog sculpture as a centrepiece at the Mandarin Oriental Hotel, while a number of artists will showcase their smaller works (paintings, installations) at OP Place in Charoen Krung 34. 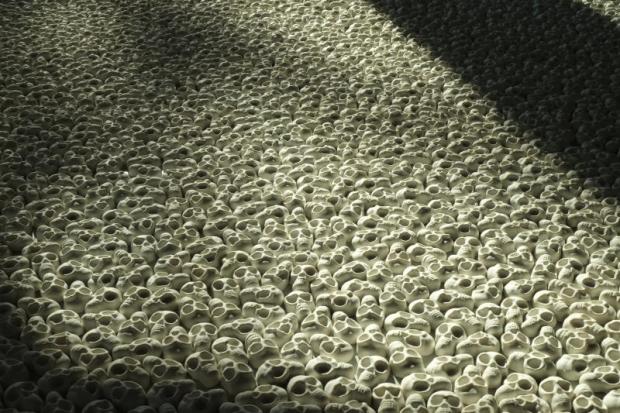 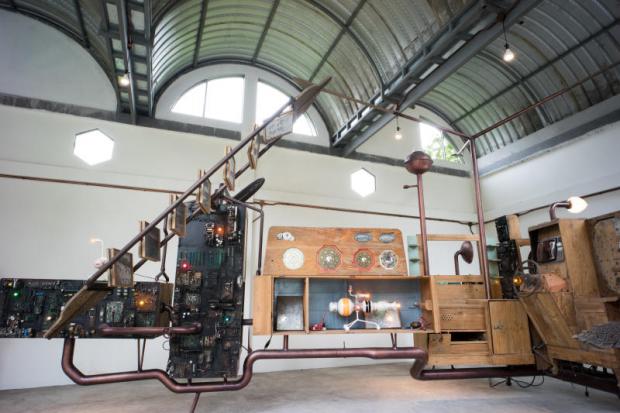 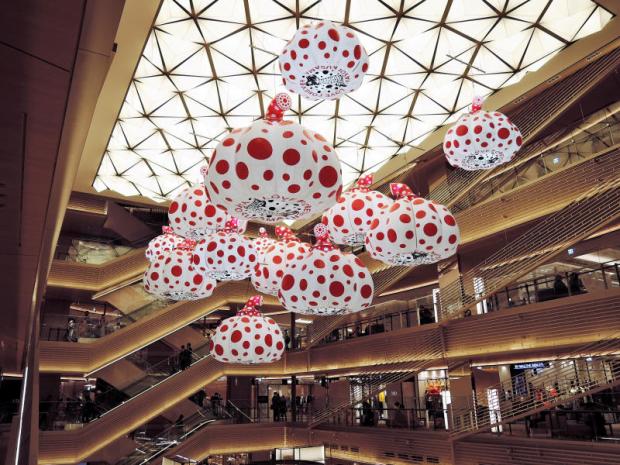 Yayoi Kusama's pieces will go on show at various venues.