World Beat was in the field in Pak Thong Chai, Nakhon Ratchasima, this past weekend for the annual Jim Thompson Farm party, bringing to a close the six-week farm tour which is open to the public.

Each year a theme is chosen, usually an aspect of Isan culture, and artists and architects get to work creating installations and artworks. In recent years, the themes have included water as the "life source" of Isan and a celebration of pha khao ma (a type of sarong worn by men). This year the theme was food, with the focus on many of the Isan specialities that are popular across the country.

This year Molam Bus curator Arthit Mulsarn invited Molam Bank, the Junlaholaan Band and the All-Thidsa Band, a band that often performs with the Jim Thompson Molam Bus, to take to the tiny but intimate stage inside the Isan Village at the farm.

I met Molam Bank (Patiwat Saraiyaem) at the annual Molam Wai Khru (paying homage to teachers) ceremony at Khao Kampaeng Temple in 2017. He told me that he had just been released from prison after serving a two-year sentence for words a character he was portraying said in a play. He did his time, locked up with hardened criminals, and since then he has returned to performing, often as a duo with a khaen player. 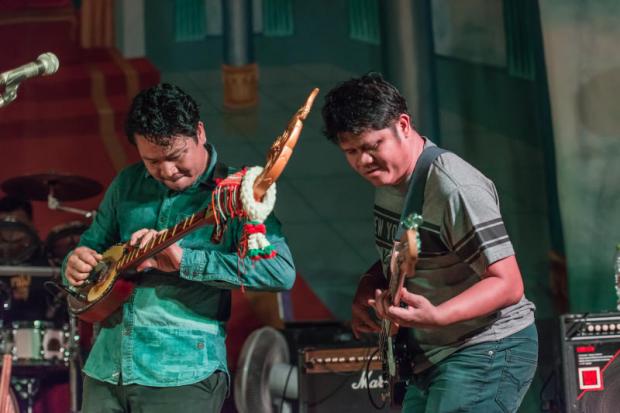 Molam Bank was first up on stage and he entertained everyone with his poetic (glawn) lam and funny comments between songs. The two performers set up a slow, infectious groove that lasted throughout their performance.

Next up were the Junlaholaan Band from Sakon Nakhon, well known in Isan for their fusion of molam and Thai rock. The band is led by a singer whose voice belies her small stature and her vocals were accompanied by some excellent phin (Isan lute) playing that had a mandolin-like sound (the player used a capo halfway down the neck, which gave it a softer tone than usual).

With the recent success of another Isan fusion music pioneer, Rasmee, the Junlaholaan Band could well be the next band to emerge from the region. I was impressed not only with the singer and phin player but also the bass player, whose funky lines set the band's driving rhythms.

Molam Bus favourites All-Thidsa completed the night's revelries with a long set of mainly instrumental grooves that once again featured the phin playing of leader Arthit Khamhongsa and fiddle playing of Weerayut Seekhunlio, as well as some keyboard wizardry from Tony; Molam Nittaya joined the band for glawn and toei songs.

It was a fun evening that went long into the early hours of morning; the haunting sound of lam music filtering through the trees and fields as we made our way back to our digs.

I had the chance to take a quick tour on the last day to eat some delicious larb phet (spicy Isan duck salad) with sticky rice. The food area is in the Isan village at the farm and there is a small stage there for daily music performances. As luck would have it, I stumbled across a terrific find: Isan shadow puppetry, or nang pra mo Thai Isan. While the most famous shadow puppetry in Thailand comes from the South, Isan also has a long history of the art. 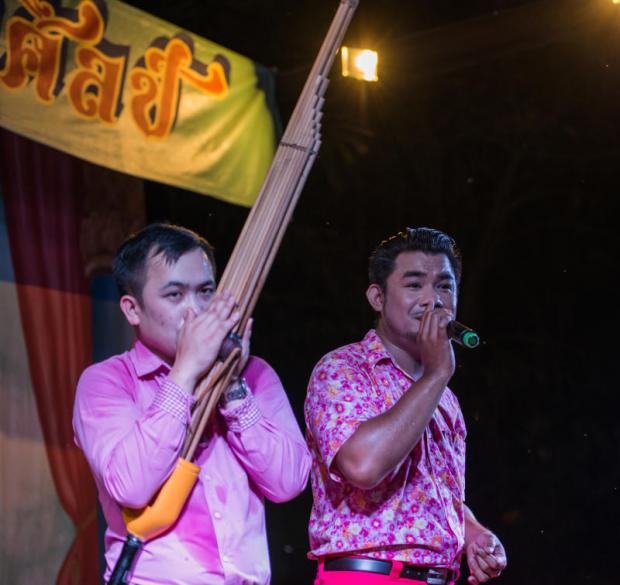 At the farm stage, Lam Sing Nang Pramor Chai Singh, Khana Lam Luan Dtor Glawn and Khana Khaen Fang Khong were in action, performing to a small but enthusiastic gang of middle-aged ladies who jumped up to dance in front of the puppet screen. I had never seen this art form before, so it was a treat to see how they organised what is a complicated process, and to chat with the musicians and shadow puppet masters.

Isan shadow puppetry requires three groups of performers: first there are, of course, the puppet masters. Next to them stand the molam who sing lines of dialogue and glawn, which are acted out simultaneously by the puppet masters. They are supported by a band that features khaen, phin, ching (temple bells) and drums. That is quite an undertaking and the performers must really know what they are doing so that all three components work together. It was a very impressive operation.

Sadly, all the performers were quite advanced in years, and there were no youngsters learning this art from them to carry the skills over to the next generation. I plan to take a trip back to Isan to talk further with the puppet masters and I really do hope that at least some youngsters learn this wonderful art. More on this in later columns.

You can find both the All-Thidsa Band and Junlaholaan on their respective Facebook pages and on YouTube. 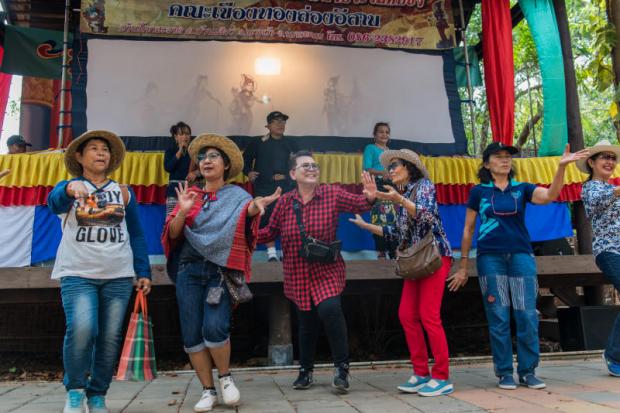