Krasue is a Thai ghost beside whom vampires -- and other blood-lusting Western monsters -- pale in comparison. Basically a detached head of a woman floating around in the dark, lit up by a phosphorescent glow from her still-beating heart, and with her bloody entrails dangling below the head like an infested creeper, krasue feeds on, naturally, filth, blood, corpses and carcasses. Sometimes it's compared, for the sake of convenience, with Gothic-era will-o'-the-wisp or jack-o'-lantern. But seriously, please, that is a gross under-characterisation that discounts the supreme grotesqueness of krasue, born by the pulpy fantasy of our equatorial folklorists. 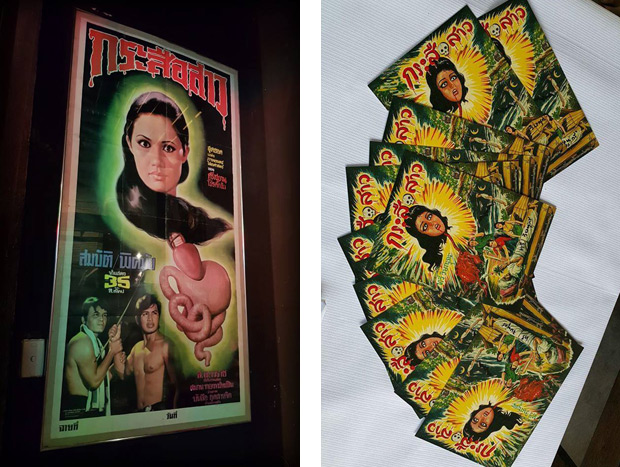 From left: A poster for the 1973 film Krasue Sao, which popularised the image of the ghost as a body-less female with dangling intestines. (Photo courtesy of Thai Film Museum); Krasue Sao by Tawee Witsanukorn.

Like her long-standing classmates of the Thai supernatural anthology -- Mae Nak Phrakanong, for instance, or the gut-sucking phob -- krasue is a woman, condemned, cursed and ostracised. Or at least she's a woman during the day, then transforms into a monster by night as her head floats out of her body, flying in bizarre nakedness, her anatomical shape denuded and defiled. And yet she's still unmistakably female: yucky, disgusting, baneful and somehow irresistible.

Also, like other Thai ghosts, krasue has long been in horror tales, 1 baht pulp comics and movies (and is also mentioned in 16th-century Ayutthaya-era writing). Now krasue has found her way back into multiplexes, with two films that propose to give this vintage, cheap-looking banshee a more contemporary look and interpretation. In cinemas now is Saeng Krasue (the English title, Inhuman Kiss, is more fantastical), released last week to enthusiastic reviews, and next month Krasue Siam (its more subdued English title is Sisters) will hit cinemas nationwide.

Inhuman Kiss is a fine blend of ghost drama, monster flick and romantic tragedy, dressed up in polished production and high-quality CGI. Set in a rural village in the 1940s, it tells the story of Sai (Panthira Pipityakorn), a woman by day and krasue by night, and her triangulated romance with two men, one a krasue hunter, the other a herbal doctor who tries to make her human again. Once the secret is out that Sai slips out at night to feed on cattle and even babies, the villagers put together a hunting party, led by a Van Helsing-like assassin, to kill her and restore peace.

Through this set up, the film offers a reading of krasue transfiguration as a biological horror. Sai has become a monster who eats raw buffalo because she's been infected, her body malformed against her will, and her appetite for blood beyond her dietary control. While this is still a horror movie that features monsters and chanting monks, the film has great sympathy for the krasue, viewed here as prey rather than predator.

While this isn't a new theory -- the Department of Mental Health warned years ago that the Thai belief in phob and other forms of possession can be explained with medicinal knowledge -- Inhuman Kiss visualises the victimisation of the woman with sensitivity. The "kiss" in the title also offers a chance for a pathology-inspired reading: the krasue disease, like other sexual diseases, is transmitted through saliva, and a kiss (the French kind, preferably) is at once a sign of passion between krasue and her boyfriend, and a spread of the darker force. Love is an illness. Love kills, and love also heals. The metaphor keeps going, and the intersection of deformity and desire in the shape of a krasue woman will continue as the basis for cinema studies and anthropological papers.

Inhuman Kiss and the upcoming Sisters feature handsome production values and a modernised image of this old-fashioned, often "rural" ghost. Though tales of krasue have been told for a few centuries in folk tales, the popular image of the species as a body-less female head with a coil of intestines and glowing light is believed to have first appeared in 1968 pulp comic Krasue Sao (Young Female Krasue), drawn by Tawee Witsanukorn, followed shortly thereafter by a 1973 movie of the same name. Starring Sombat Metanee and Pisamai Wilaisak, it was the first time krasue had hit the big screen. (The film's poster was longer than standard movie posters, to emphasise the length of the krasue's dangling entrails.)

In the following decades there have been many TV productions and films featuring krasue, mostly horror tales with an emphasis on guts, gore and the faintly sexualised image of the long-haired monster. Some, however, attempted a romantic interpretation, such as Krasue Valentine (2006). It should be noted here that similar monsters as krasue exist in tales from other Southeast Asian lore -- the folklorists in this part of the world have long been imaginative with female ghouls.

Which leads us back to the chart-topping, perennially profitable Thai female ghost of Nak, the pregnant wife who died in childbirth but sticks around, with her dead baby, to dote on her unsuspecting husband. The update of krasue in 2019 recalls the frequent updates of Nak. Once the stuff of B-grade horror and provincial tales, the legend of Nak received a cinematic overhaul in 1997 by Nonzee Nimibutr when he gave the old-school ghost a serious, no-nonsense treatment and high-value cinematography, catapulting her from the cobwebbed kore into one of the most memorable Thai films of all time (it made 150 million baht). Then again in 2013, Phi Mak Phrakanong -- the same tale told from the point of view of Nak's husband -- was reformulated as a horror-comedy-romance starring half-Western actors, and it became a phenomenal hit, making nearly 1 billion baht and remaining the highest-grossing title in history. 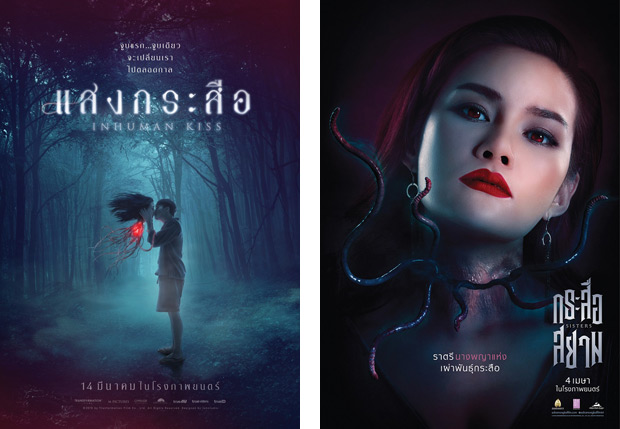 The krasue makeover follows more or less the formula of upgrading Nak. First, give a more "middle-class" look to a ghost that was originally rural and unsophisticated. Then add a romantic touch to the horror base, because inter-species romance is impossible, thus a source for ready-made tragedy. At the same time, don't make it too "modern", because the vintage look and feel can score hip points and nostalgia appeal.

Scary and pitiful, ghastly and sexy, fierce and vulnerable, the catalogue of Thai female ghosts -- krasue, Nak, and also phob, never to be underestimated -- is a haunting gallery for the #MeToo era. Prejudiced by society, they return from the netherworld to frighten and to find redemption. And with that in mind, Inhuman Kiss doesn't go that far; the film should have the guts to push for genuine body horror and to be more visceral in showing the physical torment of the krasue-woman and her quest to redeem her own body -- because that's where the real horror lies.

The ransacking of graves will continue, and when the next Thai female ghost flirts with pop-culture status, she will have to carry a burdensome weight: she has to scare, to entertain, to represent, and to turn our past steeped in myth into a future that's more immediate and real.