The story on the wall
Thailand
Special Report

The story on the wall

Despite the fact that the whole story of the Thai classic literature Ramakien and its characters Phra Ram, the Monkey King Hanuman or the 10-faced demon Tossakan have been depicted as mural paintings along the surrounding walls at the Temple of the Emerald Buddha since ancient days, not everyone today could claim to know the entire story or remember every character in the epic, derived from the Indian epic Ramayana.

In order to make things easier for the new generation of Thais to understand and to appreciate more of national cultural heritage, the ancient tale has been turned into Ramavatar, a new innovative Thai animated film which is being brought to select cinemas nationwide, starting this Songkran, at no charge to viewers.

Under the concept of "Murals Brought To Life", Ramavatar was created by a group of animators and experts from various fields who worked together under the supervision of director Atipat Kamolpet and executive producer Nonzee Nimibutr. Together, they bring to the screen Ramakien as told through the wall paintings that stretch for more than 2km at the Temple of the Emerald Buddha.

"The project started when director Atipat Kamolpet approached me with the idea a couple of years ago," Nonzee told Life in a recent interview. "Actually, Atipat did a similar animation film 12 years ago, as a short, in order to promote the Temple of the Emerald Buddha and to celebrate the 60th anniversary of the accession to the throne of King Rama IX. But due to such a small budget, the project was eventually discontinued. So this time, we discussed the possibility of making a new one as a full-length film. And it's fortunate that this time the new project was supported by the Ministry of Culture, so the film now gets to see the light of day."

Originally, the story of the Ramakien epic had been adapted and partly rewritten by King Rama I and later by King Rama II. There are 178 panels in all. They were originally painted when the temple was first constructed in 1783, but exposure to the elements requires constant maintenance, so there is always a degree of new drawing and painting.

With a story that deals, basically, with the triumph of good over evil, the Ramakien has had a significant influence on Thai literature, art and drama. Both khon (masked dance) and nang yai (shadow play) dramas are derived from it.

With the intention of bringing this national and cultural heritage to a wider audience, both nationally and internationally, the 178 scenes of the murals on the temple wall have been made more accessible to the public in a multimedia format that blends khon with the artworks. 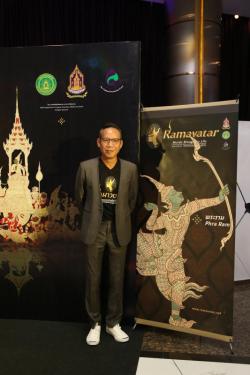 "Although the story of the Ramakien has been with Thai people for a very long time, less and less people nowadays are aware of its importance. Young people may have heard of the epic in the form of the khon, but it still feels very distant," said Nonzee.

"So we decided to make Ramavatar feel like a proper film, with real movie-style storytelling, and cut all those traditional poems and music off in order to make it more accessible and relevant."

From there, the director recruited the animation team, arranging the murals image by image, and capturing them in gigapixel resolution for actual-sized representations. The film compiles hundreds of paintings from scenes 24-49 of the total 178 at the Grand Palace, with over 1,000 important characters of the epic photographed in detail. Special effects were added as enhancement.

"And as character movements were based on khon dance postures, all of our animators had gone through hours of workshops, studying all the khon gestures and movements of the dance, [converting them to] animated movements, as well as keeping the essence of the murals as much as possible," he explained.

"Despite the flat dimension of the paintings we saw on the wall, we decided to keep them that way on screen. It may not look as real as other modern animated films out there, but it was our intention to keep the uniqueness of the national treasure. So we hope the audience will be open-minded in watching this film and allow itself to be embraced by the beauty of original treasure."

Ramavatar picks up at the beginning of the story, in heaven, when the demon Nontok, who is granted the powerful diamond index finger from Phra Isuan (Shiva), uses it to kill masses of angels as he claims his revenge. But as Nontok is killed in the battle, he is reborn as the 10-faced and 20-handed giant demon named Tossakan on Earth. The new conflict starts when Tossakan abducts Sida, Phra Ram's wife, to the Kingdom of Lanka. As Phra Ram plans to journey to Lanka, he recruits the monkey chief Hanuman to come along with him. So the Sida rescue mission has begun. The story in Ramavatar ends at the point when Phra Ram arrives in Lanka before a series of epic wars begin.

To make the story even more interesting, the team decided to split the film into two parts.

"Ramavatar is basically telling the origins of the whole epic. It's the part where we are introduced to most of important characters and focus on the reason behind the war between them," said Nonzee. "The second part will be all about the epic battle between Phra Ram and the Demon King Tossakan, guaranteed to be even more fun to watch. But after all, we will have to see how well-received the first film will be. If people love it, then the second film should definitely happen."