NEW YORK: A freewheeling weekend of indulgence. A New York farm transformed by idealistic youths into a mid-size city. A celebration of rock music and utopian ideals.

Woodstock was many things but one thing is clear -- it is revered by many as the cultural touchstone of a generation.

The 1969 festival of peace, love and music marks its 50th anniversary this weekend, triggering a wave of nostalgia for an era when rock was for the young, tie-dye was cool, long hair was a statement, and kids said "groovy" without a trace of irony.

It's estimated that anywhere from 400,000 to half a million people descended on Max Yasgur's alfalfa fields in upstate New York that August 15-18, embarking on a trip of a party that saw icons like Janis Joplin, Jimi Hendrix and Santana jam as increasingly filthy festival-goers danced, stripped and dropped acid in torrential rain.

At the outset, organizers were charging $18 a ticket for revellers to attend the event, which featured now legendary rock bands like Creedence Clearwater Revival, The Who, and Crosby, Stills, Nash and Young.

John Roberts and Joel Rosenman bankrolled the festival, which they dreamed up with fellow 20-somethings Michael Lang and Artie Kornfeld as a business opportunity to promote a would-be recording studio in upstate New York.

But as news of the bucolic rock concert spread, a crush of eager attendees bottle-necked country roads winding to the festival site in White Lake, a hamlet of the small town of Bethel, some about 100 kilometres southwest of the namesake town of Woodstock. 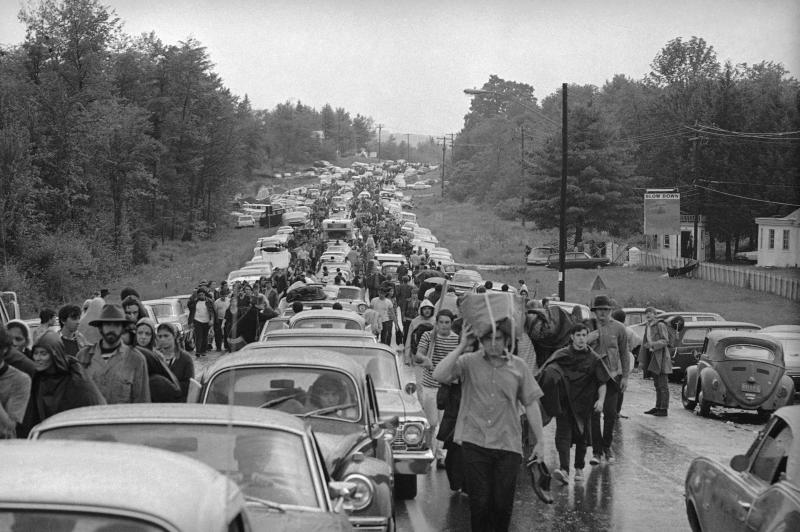 In this Aug. 16, 1969 file photo, hundreds of rock music fans jam a highway leading from Bethel, N.Y., as they try to leave the Woodstock Music and Art Festival. (AP photo)

The overwhelmed masterminds had little choice but to declare that Woodstock would be, like the love, free.

As the music began, rains swept in, food ran out and helicopters whirred overhead -- sometimes delivering musicians, other times supplies.

Despite the mud and warnings of bad acid, the myth of Woodstock lives on -- the festival is venerated as a beacon of hope that emerged out of the tumultuous 1960s, rife with assassinations and riots as the Vietnam War raged.

Sri Swami Satchidananda, a yoga master from India, opened the festival with an address urging compassion, a moment seen as embodying the non-violent culture Woodstock aimed to represent.

"I am overwhelmed with joy to see the entire youth of America gathered here in the name of the fine art of music," said the slight, bearded man, sitting cross-legged before the massive crowd, leading the concertgoers in chants of "om."

Later on, Country Joe McDonald of the psychedelic rock band Country Joe & the Fish famously led them in a profane chant, before playing the anti-war protest song "I-Feel-Like-I'm-Fixin'-to-Die Rag."

By the time Hendrix tore through his electrified, abstract rendition of "The Star-Spangled Banner", now considered iconic, the masses were heading back to the real world, just beginning to sear their collective myth into the history books.

Danny Goldberg, a longtime music industry insider who covered the festival for Billboard as a starry-eyed 19-year-old, fondly remembers the weekend as "a lot of people with smiles on their faces."

"I was taken almost immediately with this sweetness -- the idyllic notion of the hippie brother and sisterhood that rarely manifests itself, even then," he told AFP from his Manhattan office. 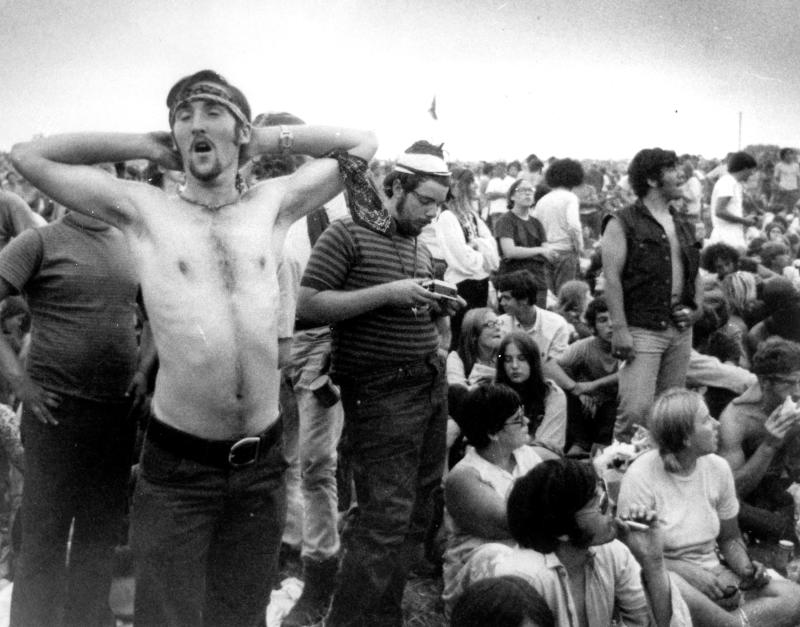 In this Aug. 16, 1969 file photo music fans relax during a break in the entertainment at the Woodstock Music and Arts Fair in Bethel, NY. (AP photo)

The adage holds that if you can remember Woodstock, you weren't really there -- and many precise details of the weekend are hostage to the drug-addled and ever-aging recollections of attendees and even the organisers themselves.

Rumours persist but mystery endures whether any babies were born at Woodstock.

Sleuthing over the decades has fallen short, and no one has come forward as offspring born onsite -- though it's likely some were conceived there.

Reports from the time say a tractor cleaning debris accidentally ran over one person in a sleeping bag, while at least one person is said to have died from a drug overdose.

Like a critically panned movie turned cult film, in the days following the festival, mainstream news outlets were largely dismissive.

"The dreams of marijuana and rock music that drew 300,000 fans and hippies to the Catskills had little more sanity than the impulses that drive the lemmings to march to their deaths in the sea," read an editorial published in The New York Times.

"They ended in a nightmare of mud and stagnation ... What kind of culture is it that can produce so colossal a mess?"

But Annie Birch, who caravaned in with a group of friends at age 20, remembers the festival as "so peaceful, given all that mass of humanity."

"That crazy rain, we had an amazing fire that never went out," she told AFP. "All those bands became iconic. It was just like wow, let's get together in a big way."

In the festival's aftermath, Yasgur, the landowner, told a television crew he "became quite apprehensive" when faced with the "sea of people."

But "these young people made me feel guilty today because there were no problems -- they proved to me, and they proved to the whole world, that they didn't come up for any problems," he said.

"They came up for exactly what they said they were coming up for -- for three days of music and peace."

Birch, now 70, said Woodstock was a defining moment both for her personally and for her entire generation.

"It was amazing," she said. "I was happy to be a part of that experience."

But she views it as a one-of-a-kind event -- not something that can be recreated.

"I'm eternally hopeful for the state of humankind that something equally amazing could happen," she said. "I much prefer the love and peace more than the war and hate."