Under the lens
Life
Arts & Entertainment

In 2015, Bangkok played host to its first international photo festival, PhotoBangkok. Works by an array of talented Thai and international photographers were displayed in 24 galleries around town, reportedly attracting over 100,000 visitors.

The triennial festival returned for its second edition last year, again proving a great success. This year, in order to draw focus to cultural and sociopolitical issues, as well as to pave the way for the festival's next instalment, PhotoBangkok is holding a series of pop-up exhibitions under the collective title "Strata".

To find out more about what makes these photo exhibitions special, Life sat down with curator Nim Niyomsin and Thai photographers Charinthorn Rachurutchata and Naraphat Sakarthornsap.

Charinthorn, a former fashion photographer, and Naraphat share a desire to use the photographic medium to encourage the public to challenge social and cultural norms. Their thought-provoking work can be seen at the "I Love Thailand" exhibition, in which they scrutinise the phrase and the ways in which it can be interpreted. 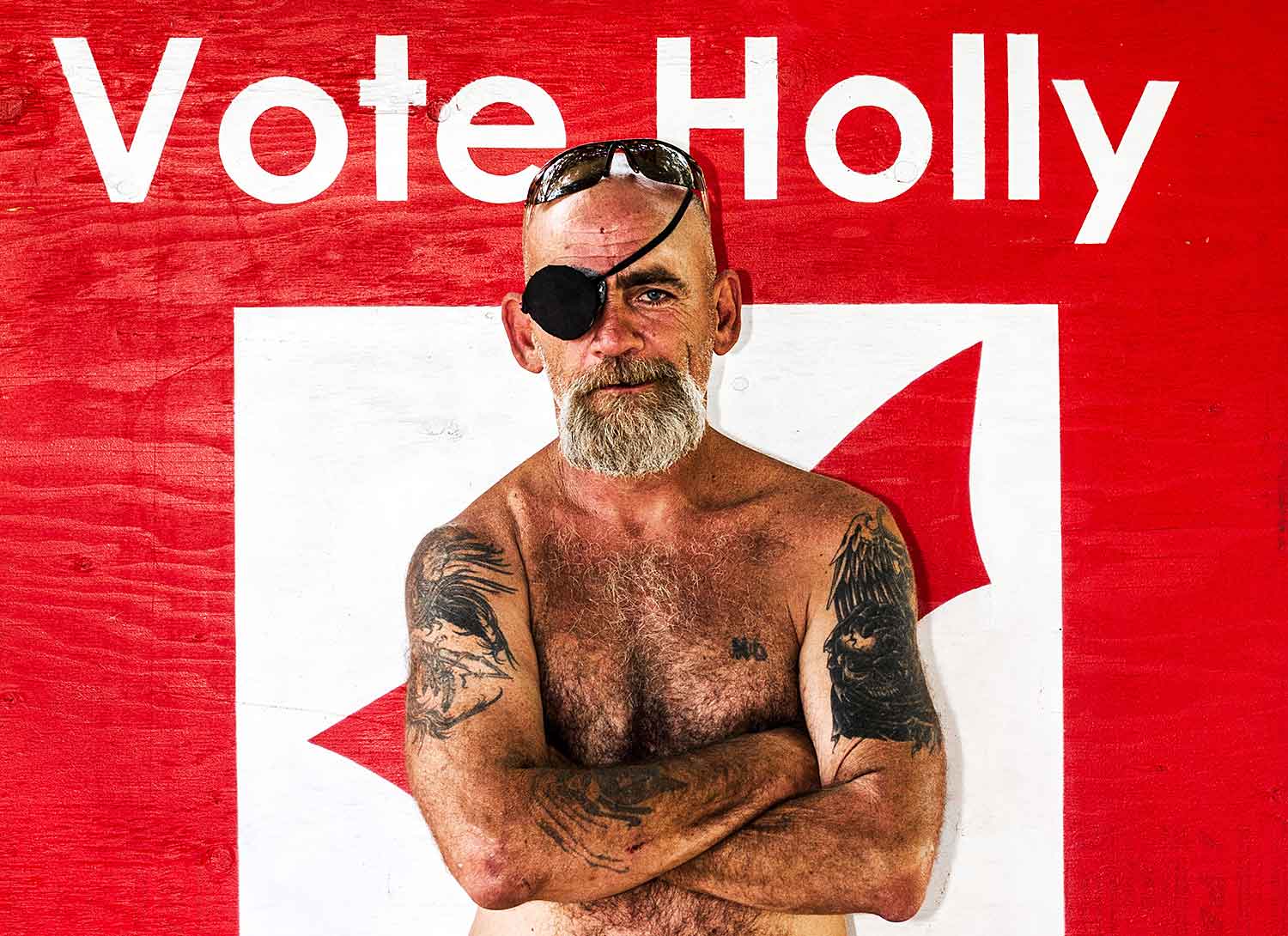 From ‘What A Wonderful World?’ photo exhibition by John Hulme and Tetsuya Kusu. Photo: Tetsuya Kusu

Charinthorn describes her photography as using psychology to reflect the bigger picture of Thai society. She attempts to expose social issues that are typically overlooked by the public.

"My wish is to use the video installation I've created to raise red flags so people will question more, and not just take things at face value, not just take in whatever is fed to them from a young age," the 37-year-old explained.

"Being born into a conservative Thai-Chinese family gave me plenty of reason to question the relevance and the meaning of the phrase 'I Love Thailand'. People are told to repeat this phrase endlessly, especially during their formative years. Do they really know what it means?"

Charinthorn's upbringing was all the more difficult for her, being a girl in a traditional household where females were not as valued as males.

"I grew up in a family environment in which I was made to believe I was second class just because I'm female," she recalls. "When I got older, I discovered that Buddhism also teaches that women are inferior, as they can't reach enlightenment until they are first reborn as a man.

"I grew up around plenty of gender bias. This built within me the sense that we should always look at the world critically. I developed an interest in psychology to help me understand why some parents control and treat their children in a such a way that they get what they want from them. I also began to question religious philosophy." 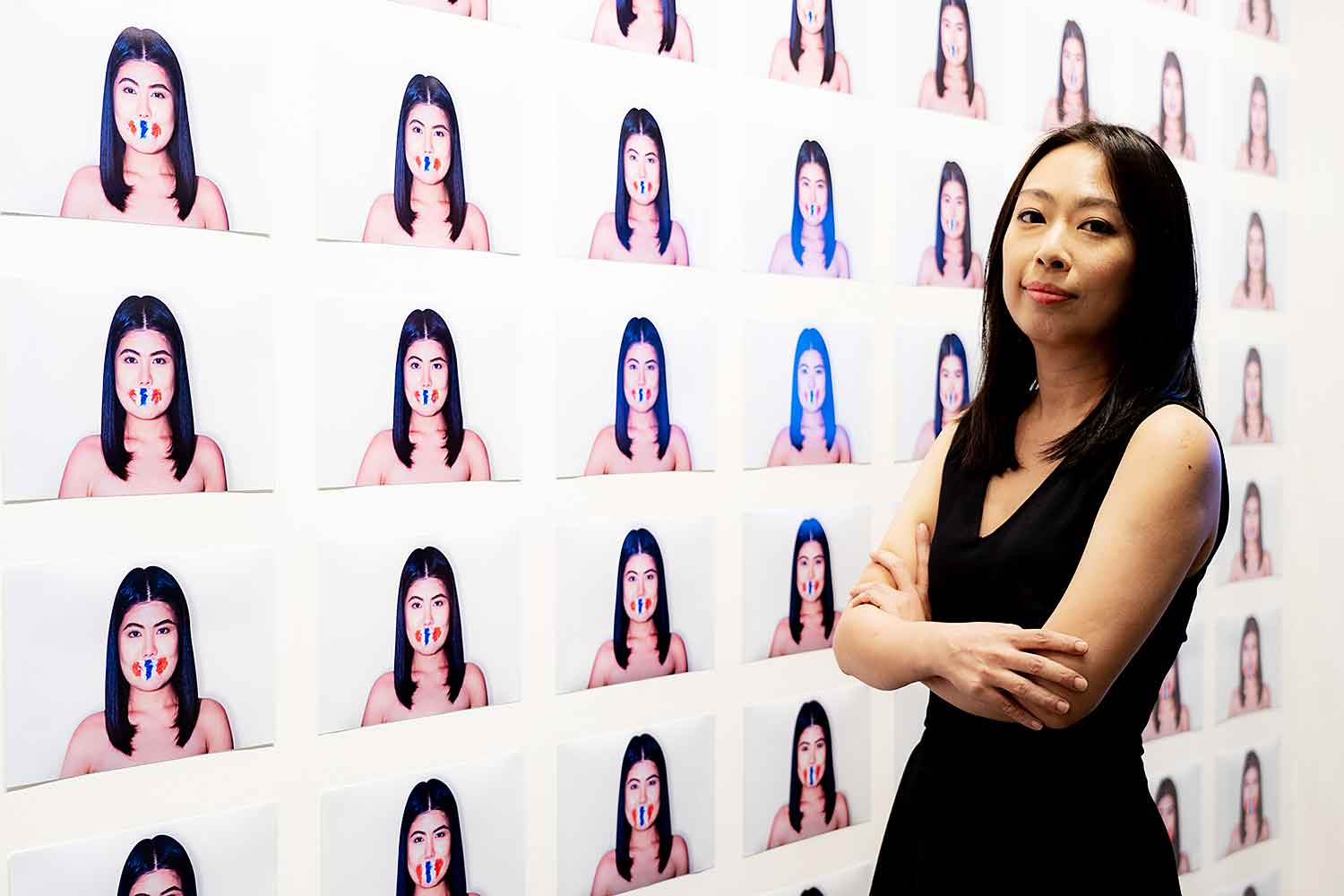 While not particularly interested in politics, Charinthorn says that Thailand's political instability and tumultuous history made her start to question what it means to say "I love Thailand".

"There are many layers to what the phrase means in our society. By having my model wear lipstick with the colours of the Thai flag and a person in the background say 'I love Thailand', I'd like the audience to think about how this relates them."

"The photos I have picked for this exhibition beg the question: Who decides what is acceptable in society and who decides what should be discarded?" he explains. "By revisiting the familiar and the day-to-day, I'm attempting to reflect how society impacts the life of every person. I'm offering the opportunity to search for value within each of us, not forgetting to look for what we've lost."

Naraphat describes his childhood as a tumultuous one. A lot of pressure was put on him to excel in academia and reach the high standards his parents set for him. Being gay added to the dysfunction and he struggled to cope. Much of his life experience has impacted the work he does today.

"Here, my focus is not on gender issues but rather on the importance of being yourself, devoid of the chains that bind you through cultural and traditional beliefs. I have opened my home to document another side of myself. It was not easy. I was always ashamed of our basic home, which we were forced to move into after my father lost his job. For years, we lived a double life, trying to make people believe that we still had money. By allowing the audience to enter my private world, I am shedding my old pretensions."

Nim says Strata brings together different photographers to show different perspectives. After painstakingly going through the portfolios of the candidates, she eventually narrowed it down to seven artists, each unique and with a message to share. Of those, three were Thai: Charinthorn, Naraphat and Ekkarat Punyatara. 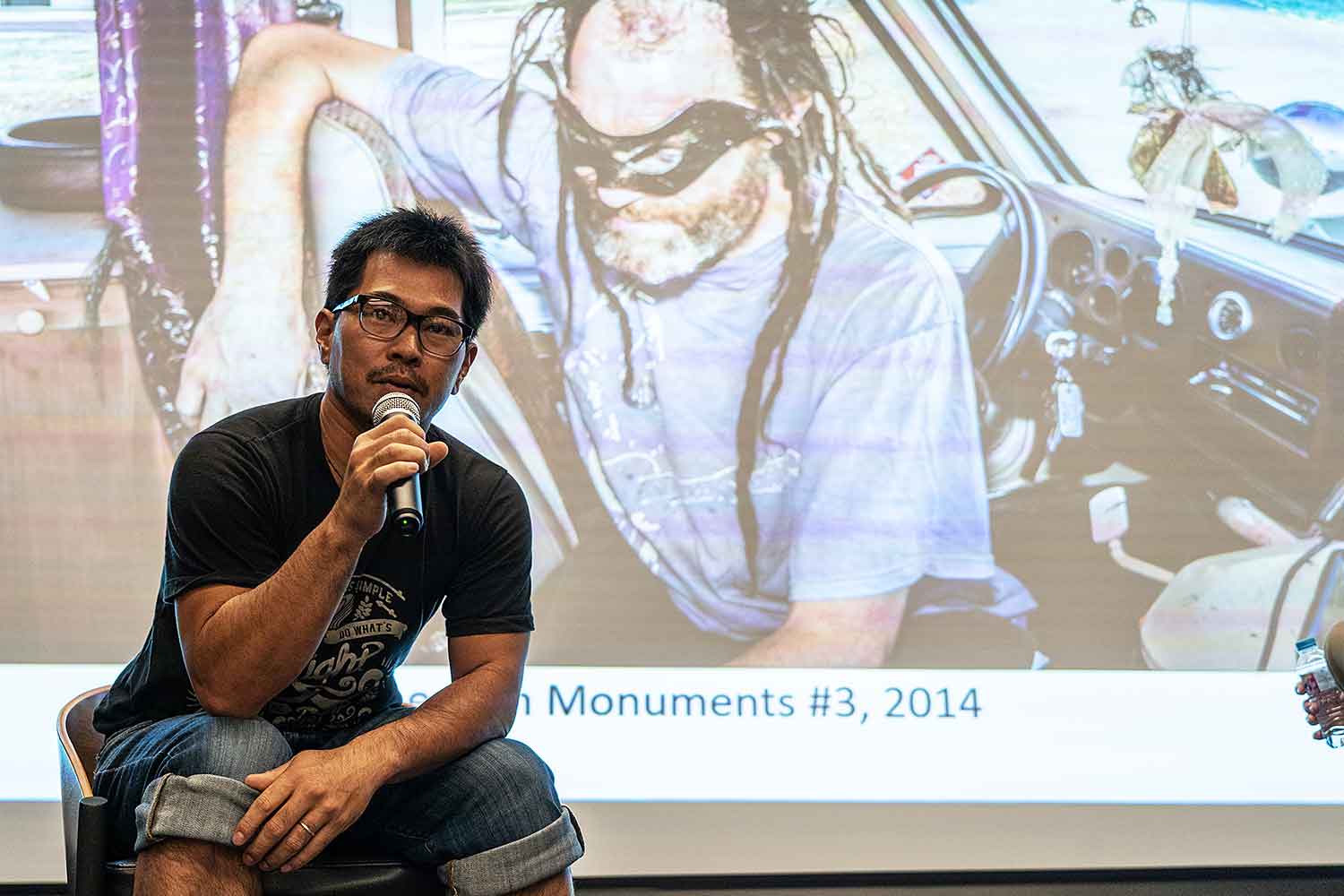 "Charinthorn and Naraphat's work is quite critical of Thai society," she said. "I like that. They are questioning cultural norms and traditions. I have seen their work develop over the years."

"Interlude" by Ekkarat, a photographer for National Geographic Thailand, captures moments in the life of the photographer in between everyday humdrum activities. The images reflect introspection and solitude.

Nim picked veteran photographer John Hulme from Scotland and Tetsuya Kusu from Japan for the exhibition "What A Wonderful World?". She first saw Hulme's work at the Bangkok Art and Culture Centre. Passionate about social issues, she was drawn to the manner in which he depicted the lives of migrant workers in Thailand.

"Hulme's photography really spoke to me because he documents facts in the most candid way," she explained. "It's direct and frank, the way in which the stories of migrant workers unravel in his work. He doesn't need to manipulate the subject to make it look more pathetic than it already is."

Kusu was recommended to Nim by 1Projects gallery. When she saw his 2014 series "American Monuments", she knew he'd be perfect for her project. 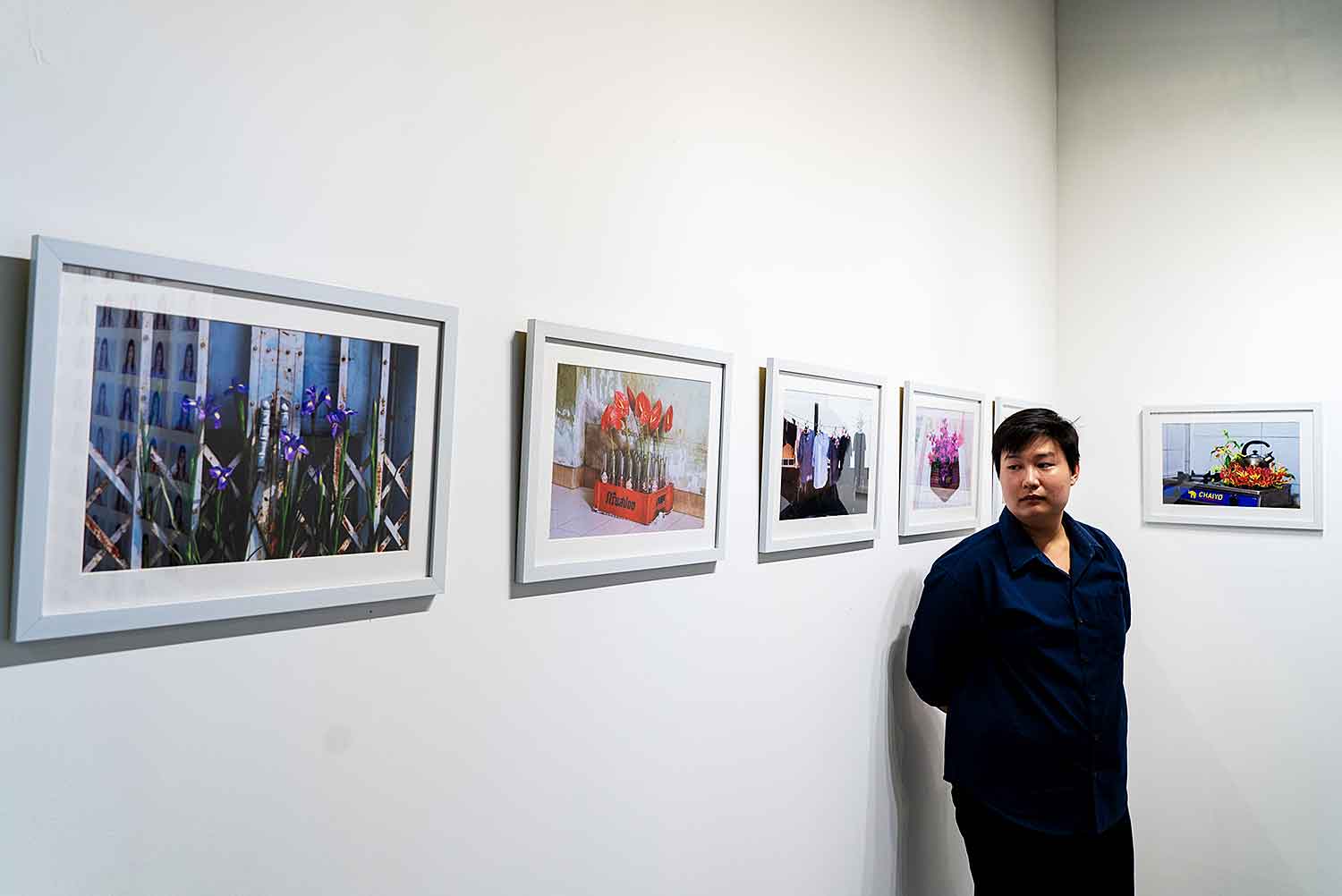 "His work had such a sense of freedom and of humour. It was only after speaking with him that I discovered the photos were representations of himself back when he was a drifter. I hadn't realised that the pictures were re-enactments. The photos had a deep meaning, as they were recalling a very difficult time in his life."

Spaniard Luis del Amo's work is on show at the exhibition "Madrid In Black And White". Nim was delighted to get him on board, and not just because he is such a well-regarded fashion photographer; his work, she says, is thought-provoking.

"When we talk about the fashion industry in Spain in the 80s and 90s, this was after a long period of dictatorship followed by cultural revolution. With the freedom to express themselves, young people unleashed their creative talents. Maybe not to the extent of Paris or Milan, but fashion was emerging in a big way across the county. The images in the exhibition reflect the cultural forces at play in that period." 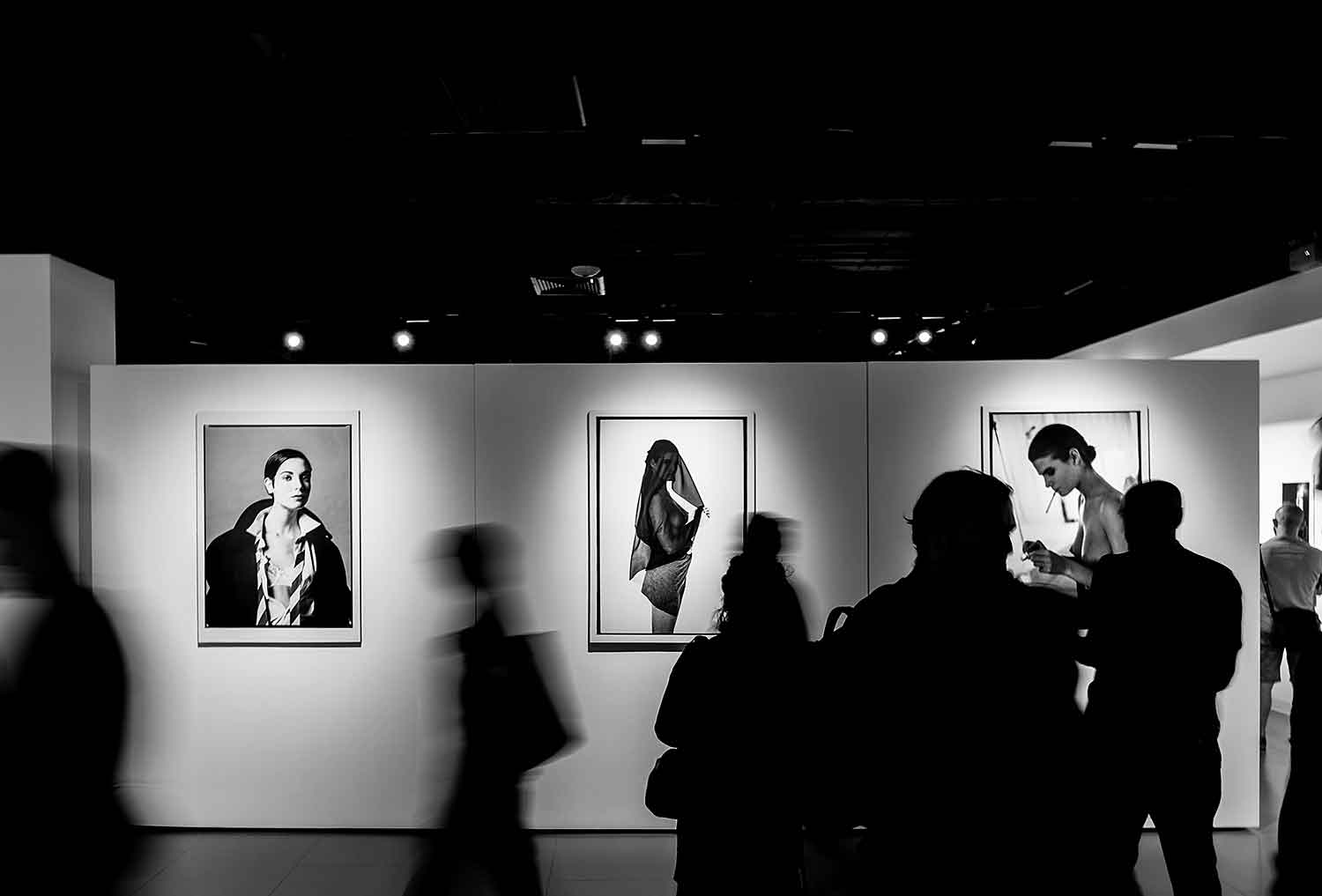 ‘Madrid In Black And White’ by Luis del Amo.

The final collection is "Expanse" by England's Suzanne Moxhay. Here, she explores the boundaries between external and internal space, her photomontages building a staged environment where the spatial periphery becomes blurred.

Moxhay's images are inspired by the matte painting techniques traditionally used in cinema.