Makoto Shinkai's follow up to Your Name is another visual treat, if not quite as well told a tale

It's impossible to watch Makoto Shinkai's latest animated fantasy Weathering With You and not compare it with his previous work. Your Name from 2016 was a massive worldwide hit, attracting admiration from moviegoers and film critics alike. It drew praise for its innovative animation style, as well as its endearing love story.

Much like Your Name, Weathering With You is essentially a love story with a twist. Shinkai is basically repeating the same trick here, but that's fine, because one of Shinkai's strengths is as a storyteller, able to come up with a fresh take on a familiar theme. This helps set him apart from his peers. That said, while Weathering With You's stunning visuals are at least on a par with Your Name's, storywise, it doesn't quite live up to its predecessor.

Shinkai adopts Shinto mythology and Japanese urban legend for his new piece. We follow Hodaka, a 16-year-old boy who runs away from his life on a remote island to take his chances in Tokyo. Alone in the big city, he finds it a struggle to get by, especially as, for the past year or so, the country has seen an unprecedented amount of rainfall and flooding.

A writer eventually gives Hodaka shelter and hires him to write articles on urban legends in the city. His research leads him to Hina, a girl with extraordinary abilities. Hodaka is amazed when Hina appears to clear away the rains after a few seconds of prayer. He convinces her that they can profit from her abilities and they soon become partners in a business. The pair eventually start to fall for each other, but there are dark clouds on the horizon as they learn that her strange power comes at a price.

Shinkai's work often features a blend of CGI and traditional hand-drawn animation, The results in Weathering With You are jaw-droppingly gorgeous. If you loved the visuals in Your Name, then they are arguably even more impressive here. There are some wonderful photorealistic shots of Tokyo, particularly Shinjuku. Some of the scenes look almost live-action, not to mention the beautiful imagery of raindrops, storms, sunset and scenery, all bursting with colour. If you get the opportunity to see the film on the big screen, it's worth the money just for the visuals alone. 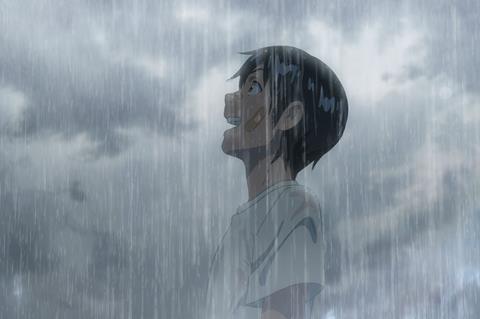 Another great thing about Shinkai's filmmaking is that he puts the relationships between his characters at the forefront, with the fantasy elements often in the background. This helps to make his storytelling more nuanced and compelling.

In Weathering With You, he again manages to make us fall in love with his protagonists, especially in the scenes where the couple help the citizens with Hina's special gift, doing small things like giving a father a sunny day to spend with his daughter. It's delightful to watch, although it does take quite a long time to get us introduced to all of the characters, and understand who they are and what their motivations are.

The music is another area with obvious comparisons to Your Name, with Japanese pop-rockers Radwimps returning for the soundtrack. Unfortunately, the music this time around doesn't work quite as well.

There are also moments in the film where the narrative gets a little confused. Some scenes go unexplained, particularly during the second half, as the story dives further into its mythological aspects. A lot is left somewhat ambiguous. There is symbolism throughout the film that references mythical sky creatures with influence over the weather. To a non-Japanese audience, this is hard to follow. However, if you're familiar with the Hayao Miyazaki classic Spirited Away, which also explores aspects of Shinto mythology, you'll probably have an easier time following Weathering With You.