K-pop sensation BTS kept up its record-breaking streak this year, landing the Guinness World Record for the fastest time to reach 1 million followers on the video-sharing platform TikTok.

The Guinness World Records announced on Wednesday that BTS hit the 1-million mark in just 3 hours and 31 minutes after joining TikTok on Sept 25, Pulse reported.

The number of followers reached 2 million within 13 hours and three million in 59 hours, with their debut post gaining more than 4 million likes.

In June, their album “Map of the Soul: Persona” also set the record for the best-selling album in Korean history at 3.39 million. 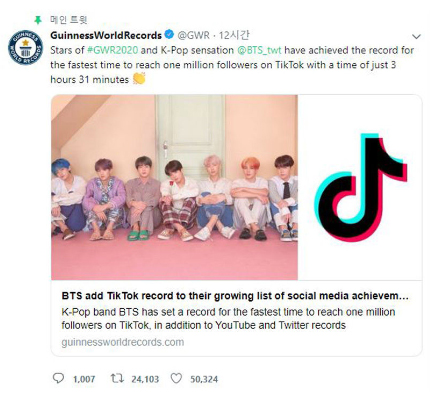 Their incredibly devoted fanbase known as ARMY also helped contribute a new record for the “most used hashtag on Twitter in 24 hours” at the online Soompi Awards, tweeting #TwitterBestFandom 60,055,339 times.