Way out there
Life
Arts & Entertainment

Shoppers at Central Embassy are boarding a spaceship to join a new adventure with robotic dinosaurs in an exhibition titled "Sorayama Space Park By AMKK" that continues until Nov 17.

To celebrate Central Embassy's 5th anniversary, this is the first collaboration by world-renowned Japanese illustrator Hajime Sorayama and flower artist Azuma Makoto, in partnership with art galleries Nanzuka in Tokyo and EchoOne Nanzuka in Bangkok.

The exhibition combines space and nature under one roof, in which some retail space is turned into a futuristic world. At the outdoor courtyard, a 4m-tall aluminium Tyrannosaurus sculpture roams a Moon-like landscape and greets the urban crowd. 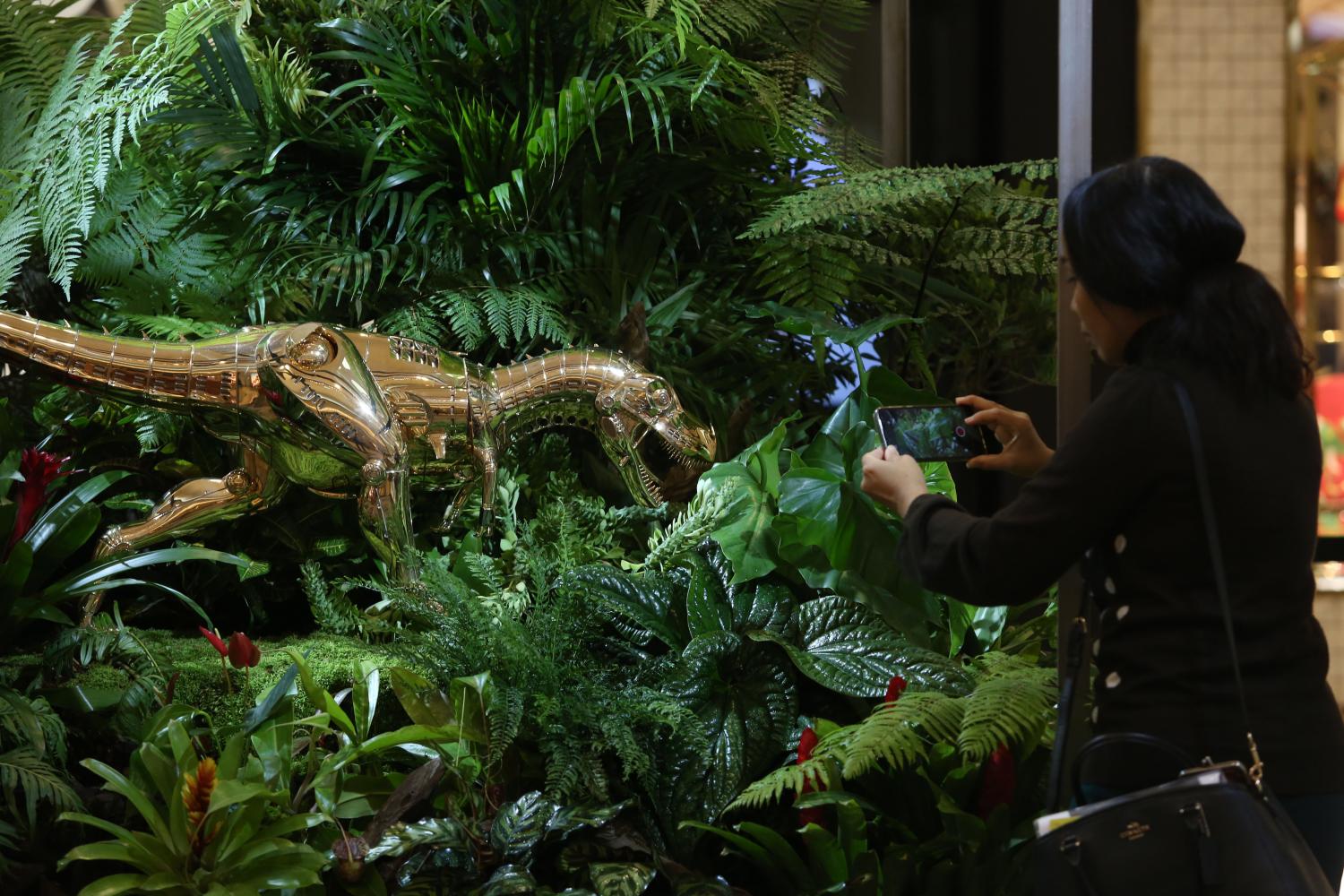 Above  A collection of five dinosaur statues are displayed in different landscapes.

"The project started two years ago once we discussed with Nanzuka in Tokyo the idea of bringing Sorayama's dinosaur to life. His work is about superrealism, and it goes very well with the cyborg-dinosaur concept. It would be a perfect match with Makoto's work -- the man who came up with the Exobiotanica: Botanical Space Flight project that boarded flowers to space. Actually, I'm a big fan of Azuma," said Borom Bhicharnchitr, managing director of Central Embassy.

Inside, five smaller-scale T.rex figures take over the indoor atrium on Level G. The work draws on Sorayama's renowned sense of realistic-expression techniques, and builds on his series of paintings exploring dinosaurs from the 1980s until the present.

"I like dinosaurs, especially the T.rex. For me, it seems like a superhero character from the Jurassic Park movies. I have dreamed of changing it to visual art. T.rex is specially painted and made it into a giant lifesize sculpture for this project. This is the largest scale I've ever done," Sorayama said.

"Focusing on dynamic movements, audiences will feel like all dinosaurs are alive and are running from a lake to a jungle. It's different from my previous work, which showcases the beautiful postures." 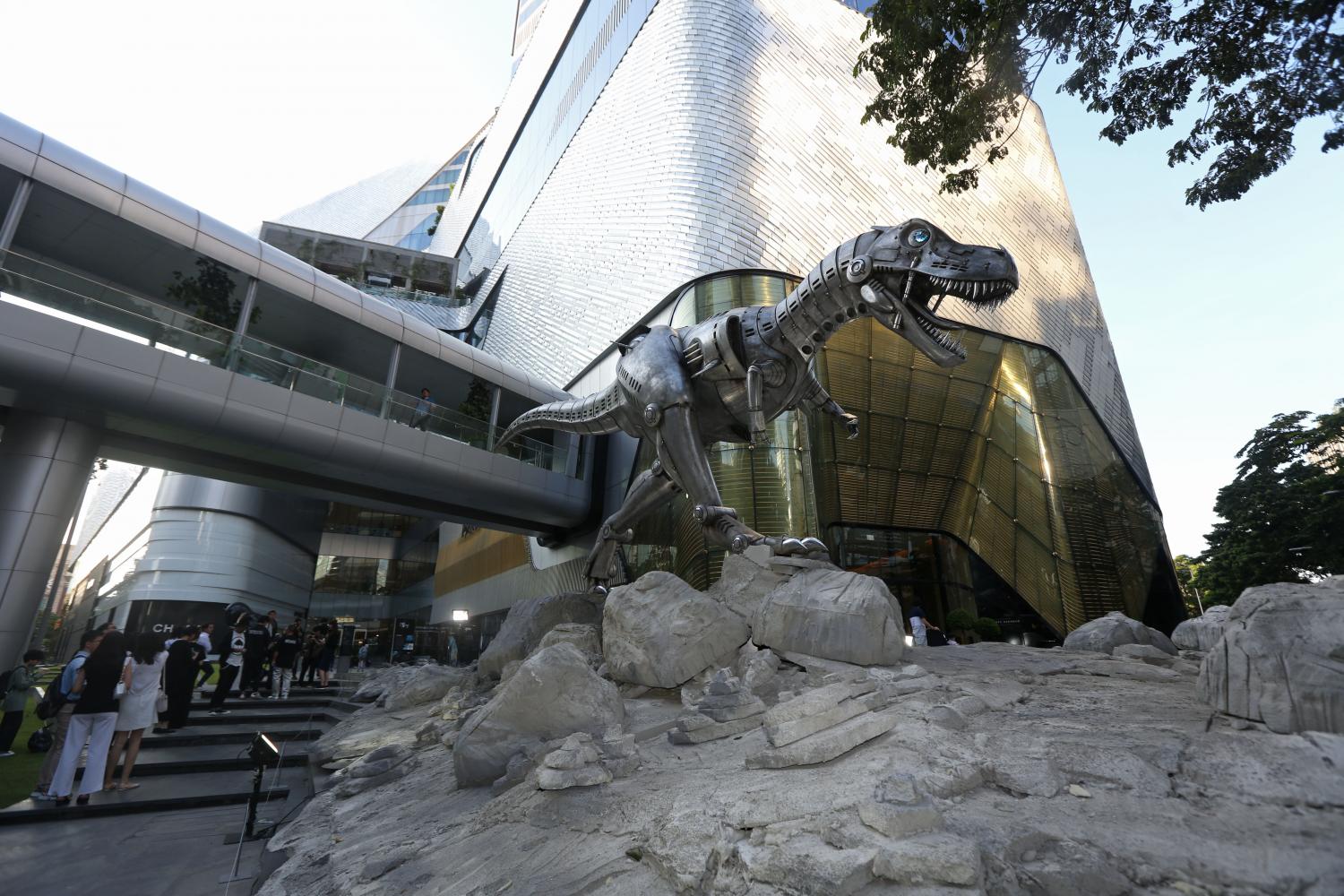 Right  The towering aluminium T.rex sculpture is standing as guard in front of Central Embassy.

Famous for unique airbrush techniques, Sorayama is considered the godfather of realistic expression. His 1983 publication Sexy Robot had described the process of painting robots through a series of graphic explanations, and has since been distributed as a textbook in art schools throughout the world.

In 1999, he worked with Sony to come up with the smart doglike robotic pet called Aibo, and in 2001 he gained a reputation by designing the artwork for the cover of Aerosmith's Just Push Play.

This year, Sorayama became a star on Tokyo's fashion runway with a series of lifelike Sexy Robot sculptures as part of Dior Men's pre-fall collection. His robot paintings embody the human impulse of pursuing beauty and reflect the ways of contemporary society such as boundaries of race, eternal life, and the fusion of technology and beauty. 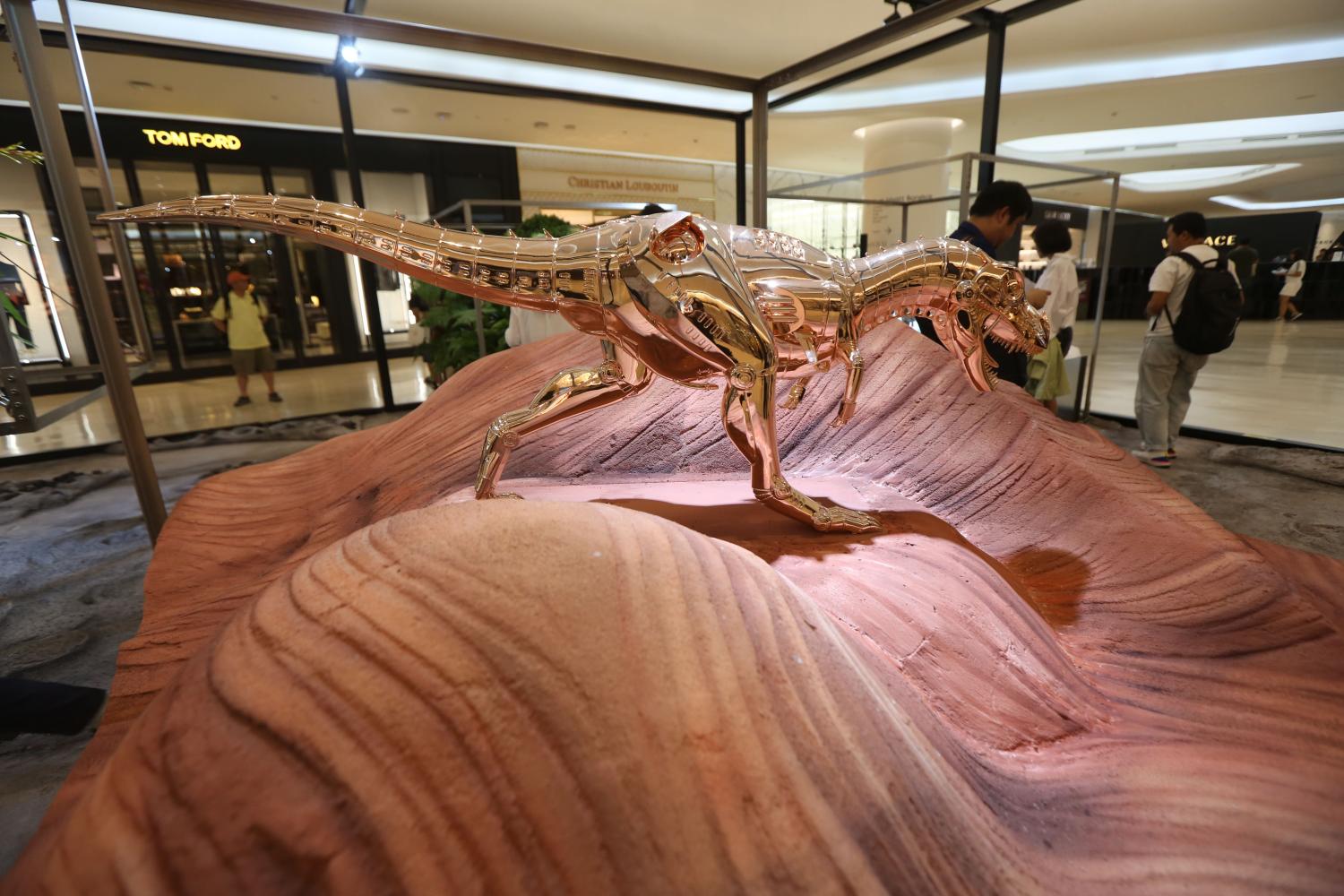 A series of five small T.rex sculptures are installed in different landscapes -- jungle, desert, glacier, garden and lake made from local flowers and plants -- to imagine Moon exploration. All are designed by Azuma Makoto, who has operated AMKK studio, renowned for developing the experimental floral and botanical creations.

"The name Space Park captures the uniqueness of this concept. There are no trees, dinosaurs or lakes in outer space -- therefore, we are creating new landscapes here that combine plant, fauna and the cosmos in the same expanse. With the world encountering a plastics problem, a creation of botanical landscapes is a module of environmental conservation," Makoto said.

"Normally, my work is about flowers and plants, but for this project we emphasise simplicity to make Sorayama's dinosaurs outstanding. Standing on different landscapes of Moon, garden, water and glacier, the artworks seem to be alive and ready to strike everything in front of them."

Makoto has been in the flower business since 2002 and has run the haute-couture floral shop Jardins des Fleurs in Minami-Aoyama, Tokyo. He began to explore the expressive potential of flowers and plants in 2005 by creating a botanical sculpture that received orders from outside Japan. 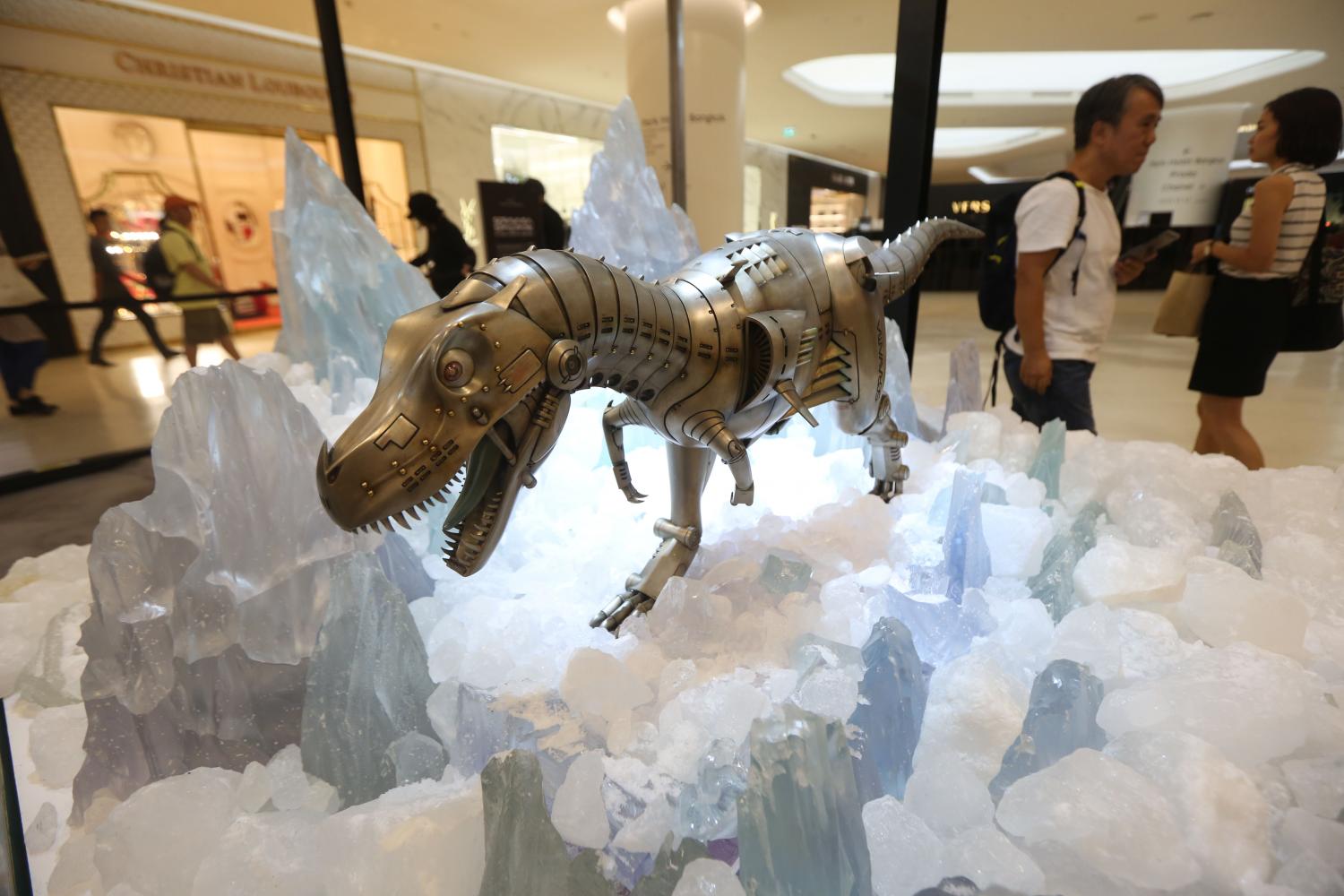 In 2009, he set up AMKK as an experimental botanical lab, and started his touring exhibition around the world. He's interested in making flowers and plants more alive than they really are.

He finds intangible and exhaustive elements -- namely, sensuous and instantaneous factors such as music in flowers and plants -- and expresses them in his work to remove their stereotyped images and present to the world new aspects. 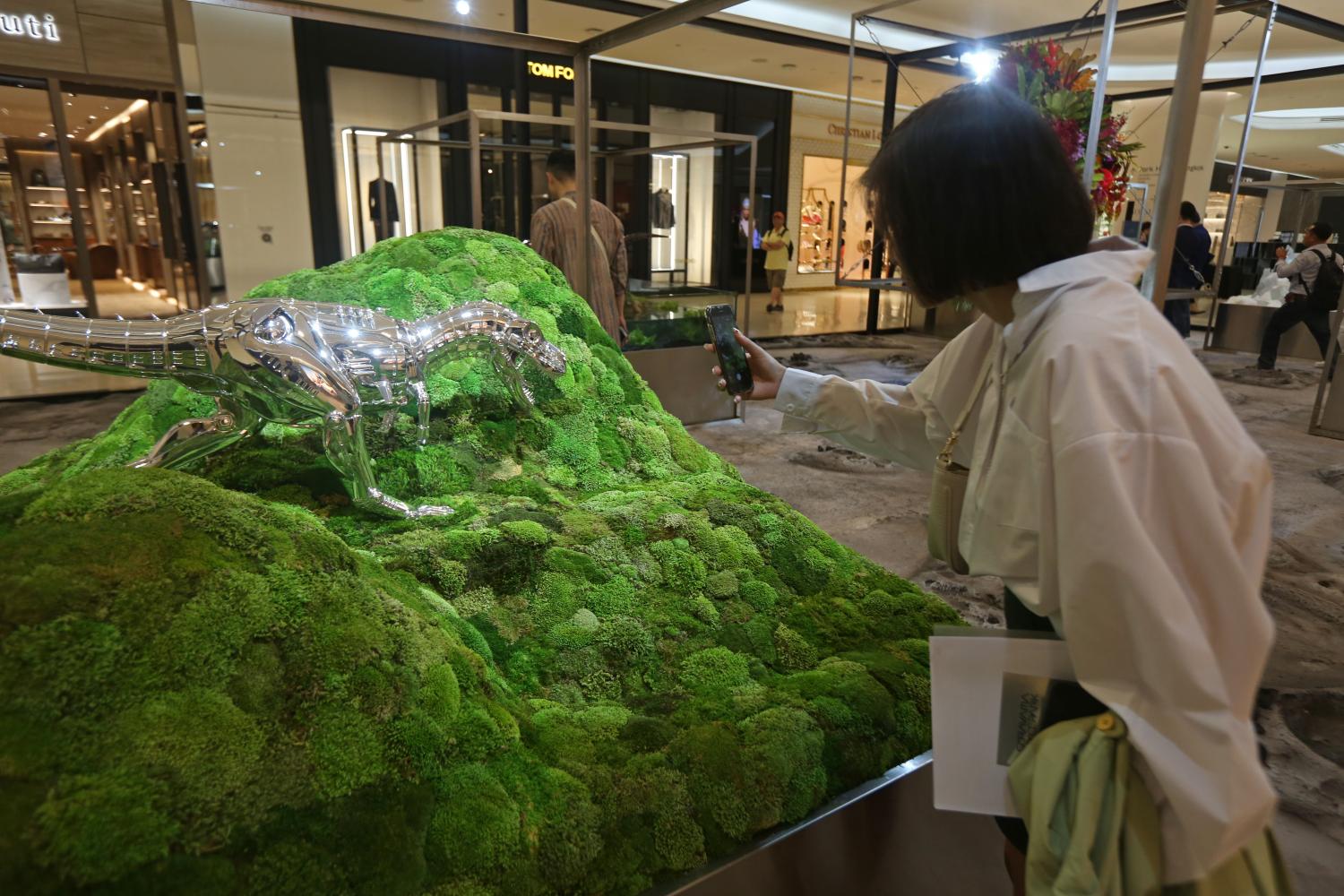 Inspired by Sorayama's work, the Siwilai Store on the 5th floor offers a limited edition of eye-catching merchandise, ranging from dinosaur paintings and sofubi figures to T-shirts, jackets, iPhone cases, tote bags and notebooks. Alongside, Makoto also set up a flower shop.

"Sorayama Space Park By AMKK" is on view on Level G of Central Embassy until Nov 17. It is open daily, 10am-10pm. Admission is free.