Growing up in Rayong, a province well-known for its beautiful beaches, young artist Chisanuphol Presanvorakitkool understands all too well how the natural environment has been altered in the name of progress.

"The beaches used to be clean and the seawater was crystal clear. But after the power plants were built, there has been a big impact. The sea temperature has increased, and a lot of marine life has died," Chisanuphol said.

The 25-year-old artist's memories of how the beaches used to be have led to a deep interest in nature. Last year, he volunteered at Huai Kha Khaeng Wildlife Sanctuary and Hala-Bala Wildlife Sanctuary in the Deep South, where again he saw how Thailand's beautiful natural resources are under threat from human activity.

"In one year, several pristine forests have disappeared. The conditions of remaining forests have become worse. Sometimes, there is rain outside the forests, but inside, conditions are dry. Animals are forced to leave the forests in search of water, often going into villages. This causes conflict between humans and animals," he said.

Another problem is that many local communities contribute to deforestation. Chisanuphol has been trying to educate children who live in the area.

"I was in the forest with Huai Kha Khaeng Wildlife Sanctuary staff to educate children and villagers about what they should and shouldn't do, in order to protect the forests. Some villagers were resistant, but we tried to approach children and change their attitudes," he said. 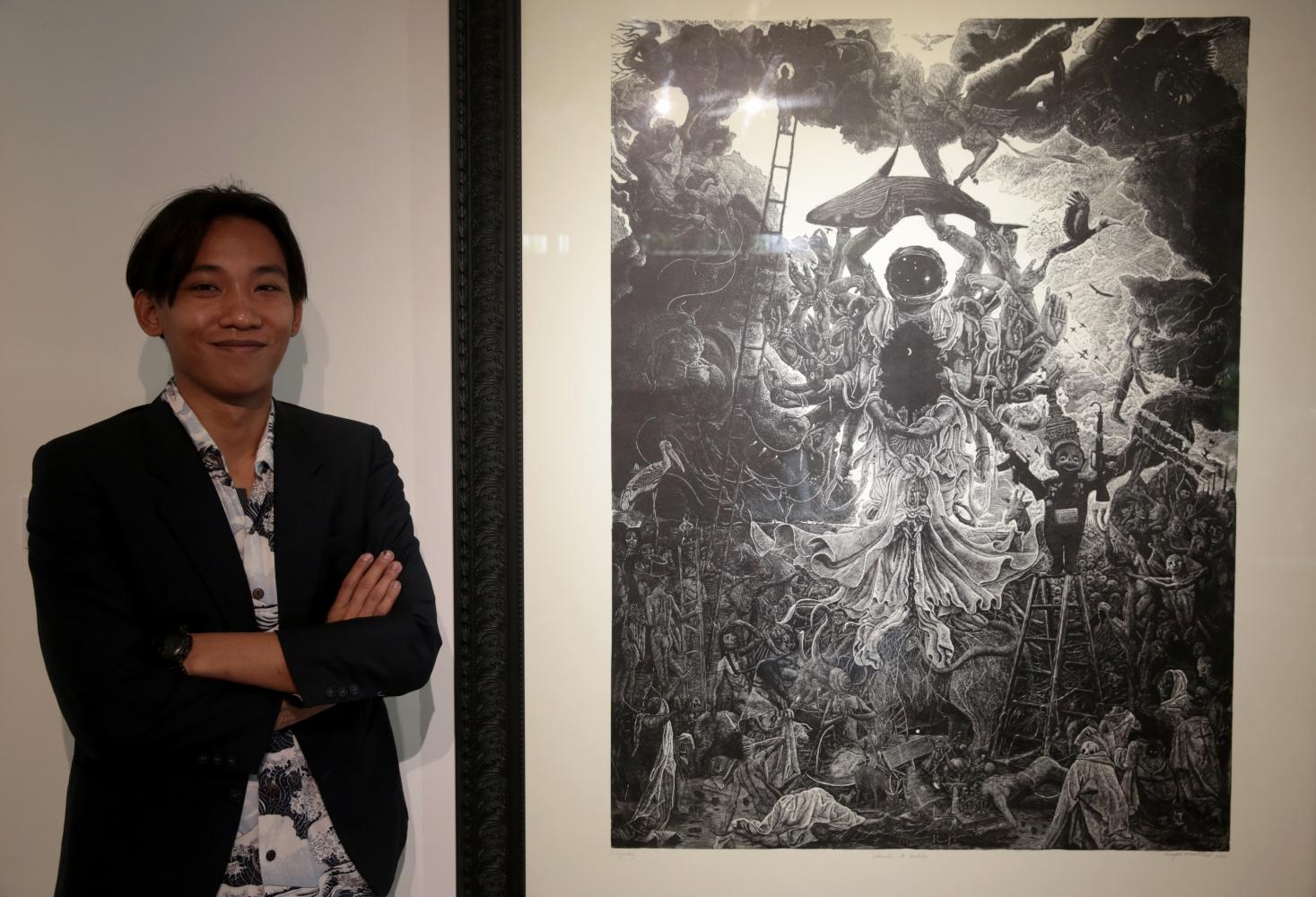 To raise awareness about the damage being done to Thailand's woodlands, Chisanuphol's latest exhibition, "Nature Is Not Saddened", recently opened at Kalwit Studio & Gallery. This compelling collection of engravings depicts humans in conflict with the environment. A fan of mythology, elements of the natural world are personified as gods, goddesses and other fantastical beings.

"At the core of this exhibition is the connection between humans and nature. I'm interested in mythology because it comes from the imaginations of ancient people, who tried to explain something they didn't understand. Sun and sky deities were created to explain nature," said Chisanuphol.

"The exhibition is called 'Nature Is Not Saddened' because nature doesn't care about the changes and their consequences. Only humans suffer the effects of these changes."

His experiences in the jungle have given him a profound understanding of its wildlife and atmosphere. As a show of respect, instead of doing traditional wood carvings, he chose to save wood by adapting techniques using resins.

"I developed the techniques myself, so there was a lot of trial and error. When the resin was too hard, it could crack easily. And if it was too soft, it was too sticky to work on. It took time and money before I figured out the right balance," he said.

In all, there are 15 pieces in the collection. Interestingly, ships are a common motif.

"In the past, ships were of huge significance... they could take people to another continent. For me, it's similar to a rocket going to the Moon," Chisanuphol explained.

In his piece My Noah's Ark, which won the Young Thai Artist Award 2019, Chisanuphol presents a humorous depiction of the apocalypse, with a cat as the central character. 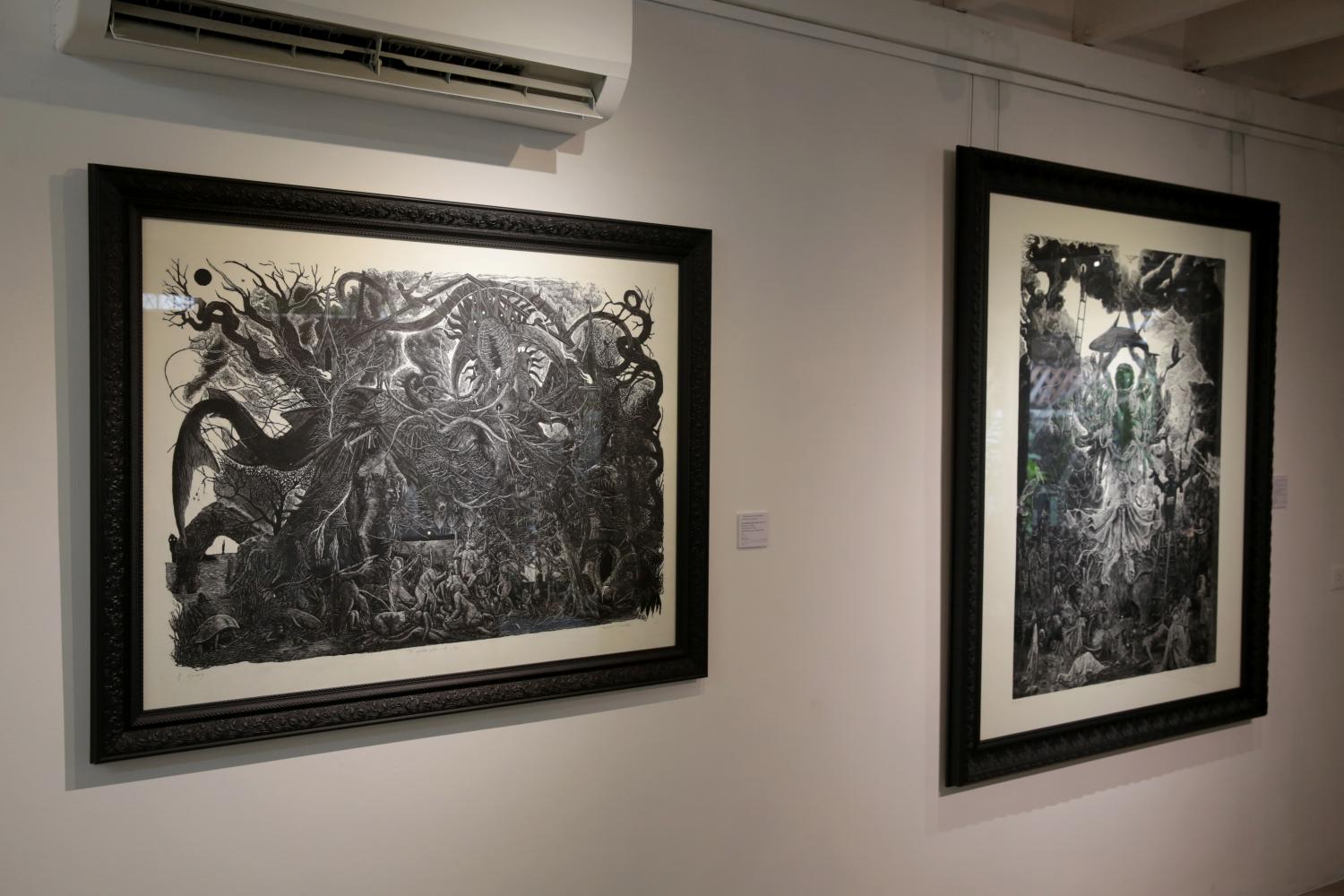 Part of the proceeds will go to support the Huai Kha Khaeng Wildlife Sanctuary and the Hornbill Research Foundation.

"After Judgement Day, people are all in the same boat. The cat is like the captain of the vessel. It is political satire that a nonsense character is in such a position of control," the artist explained.

The centrepiece of the exhibition, Colonisation With Knowledge, is full of symbolism.

"The spaceman's helmet represents science and technology. The hands represent Eastern creator gods. The simple ladder refers to Buddhism while the metal ladder symbolises interference with the natural environment," he explained.

Blood Ivory is an engraving of a hornbill. There are two versions: one in black and white, the other in colour. Through the sale of these 9,000 baht pieces, Chisanuphol hopes to raise money to help save endangered hornbills in Hala-Bala Wildlife Sanctuary.

"Part of the proceeds will go to support the Huai Kha Khaeng Wildlife Sanctuary and Hornbill Research Foundation," Chisanuphol said. "Hornbills are great for forests because they can swallow big seeds that not many birds can. They eat various kinds of fruits and seeds. Hornbills can fly up to 100km in a day, so they are great for seed dispersal. Unfortunately, people hunt them for their bills. If a male hornbill is killed, his family can't survive. The proceeds will help pay for keepers to look after them."

"Nature Is Not Saddened" runs at Kalwit Studio & Gallery, Soi Ruamrudee 2, until Feb 28. Admission is free. Visit facebook/kalwitgallery or call 02-254-4629 for more information. 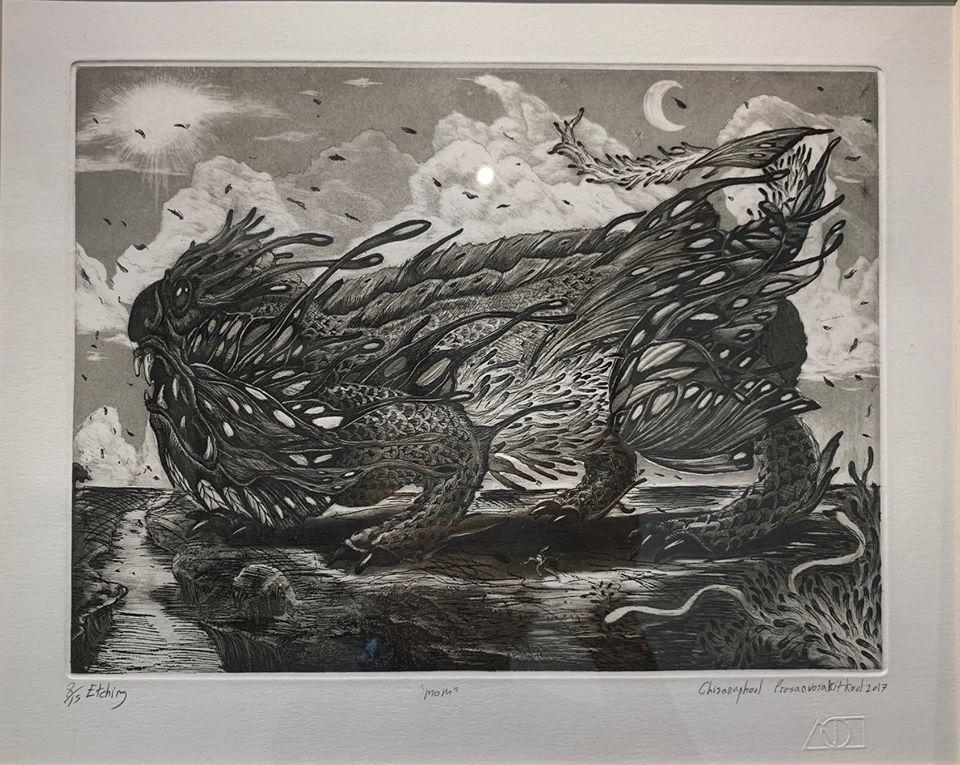 His works take inspiration from the mythologies of many cultures. Photos courtesy of Kalwit Studio & Gallery 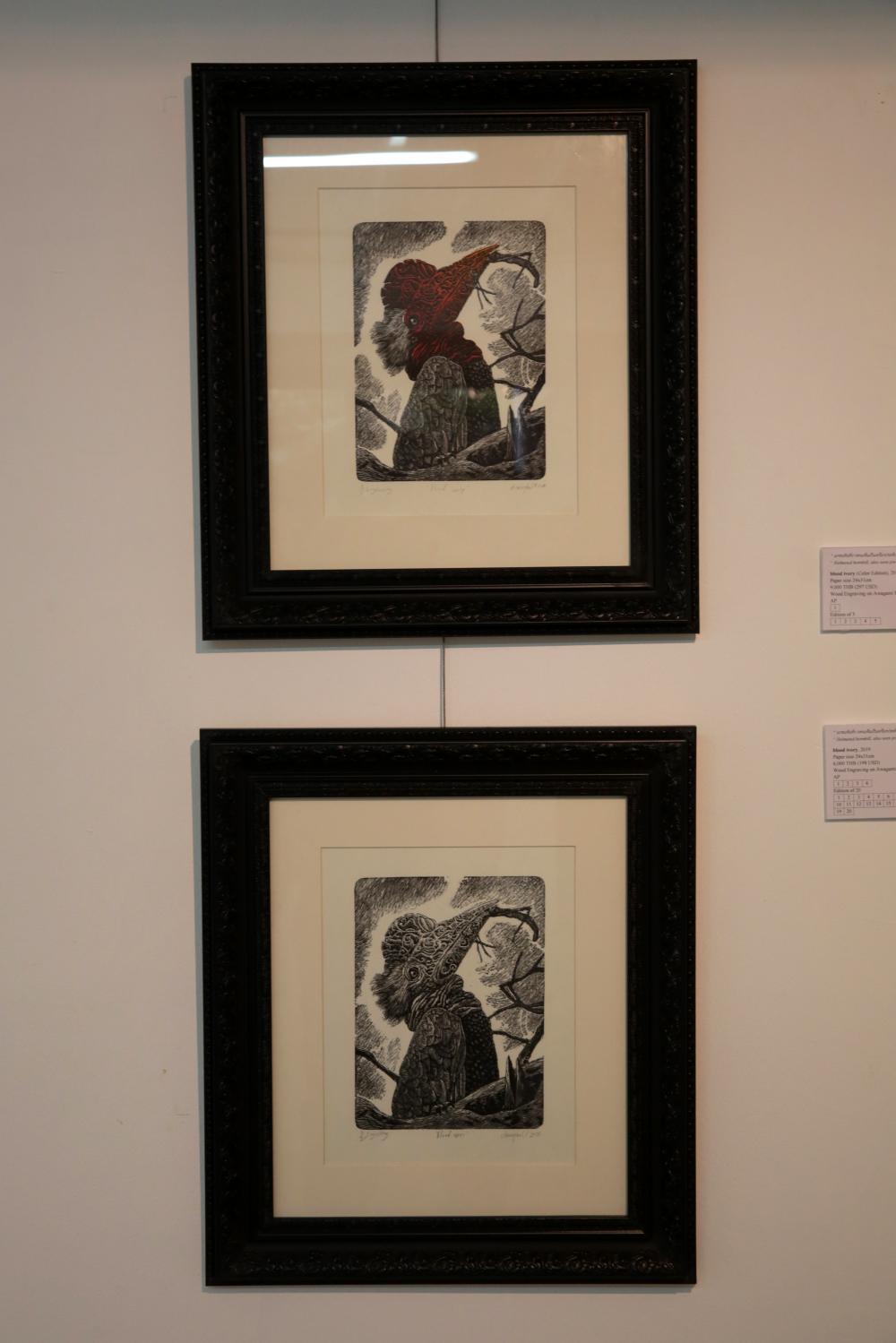 Two editions of Blood Ivory, highlighting the plight of hornbills.