Where does a performance begin?
Life
Arts & Entertainment

Where does a performance begin?

Where does a performance begin? This is the question I kept asking myself during TPAM Performing Arts Meeting in Yokohama this year.

TPAM was founded in 1995 as Tokyo Performing Arts Market before it relocated to Yokohama and changed its name from Market to Meeting in 2011. Since the involvement of the Japan Foundation Asia Centre, which was set up in 2014 to initiate more collaborations between artists in Japan and Southeast Asia, the platform has seen an increase in the presence of artists from this region. It is considered one of the most influential performing arts platforms in Asia. In fact, Thailand's three-year-old Bangkok Performing Arts Meeting (BIPAM) models itself after TPAM. But whereas BIPAM places less focus on showcasing performances and more on creating dialogues within Southeast Asia through panel discussions, talks, table meetings and speed networking -- activities fashioned after TPAM Exchange -- TPAM gives more equal weight between its performance and exchange sections.

Its performance programme is divided into two sections, the open call TPAM Fringe and the curated TPAM Direction. The Fringe programme features performances by local and foreign theatre companies, international collaborations and performing arts platforms from around the world. TPAM Direction, where I focused most of my first visit from Feb 8-16, presents mainly complete productions, including Japan and world premieres, and sometimes lectures, panel discussions and works-in-progress. 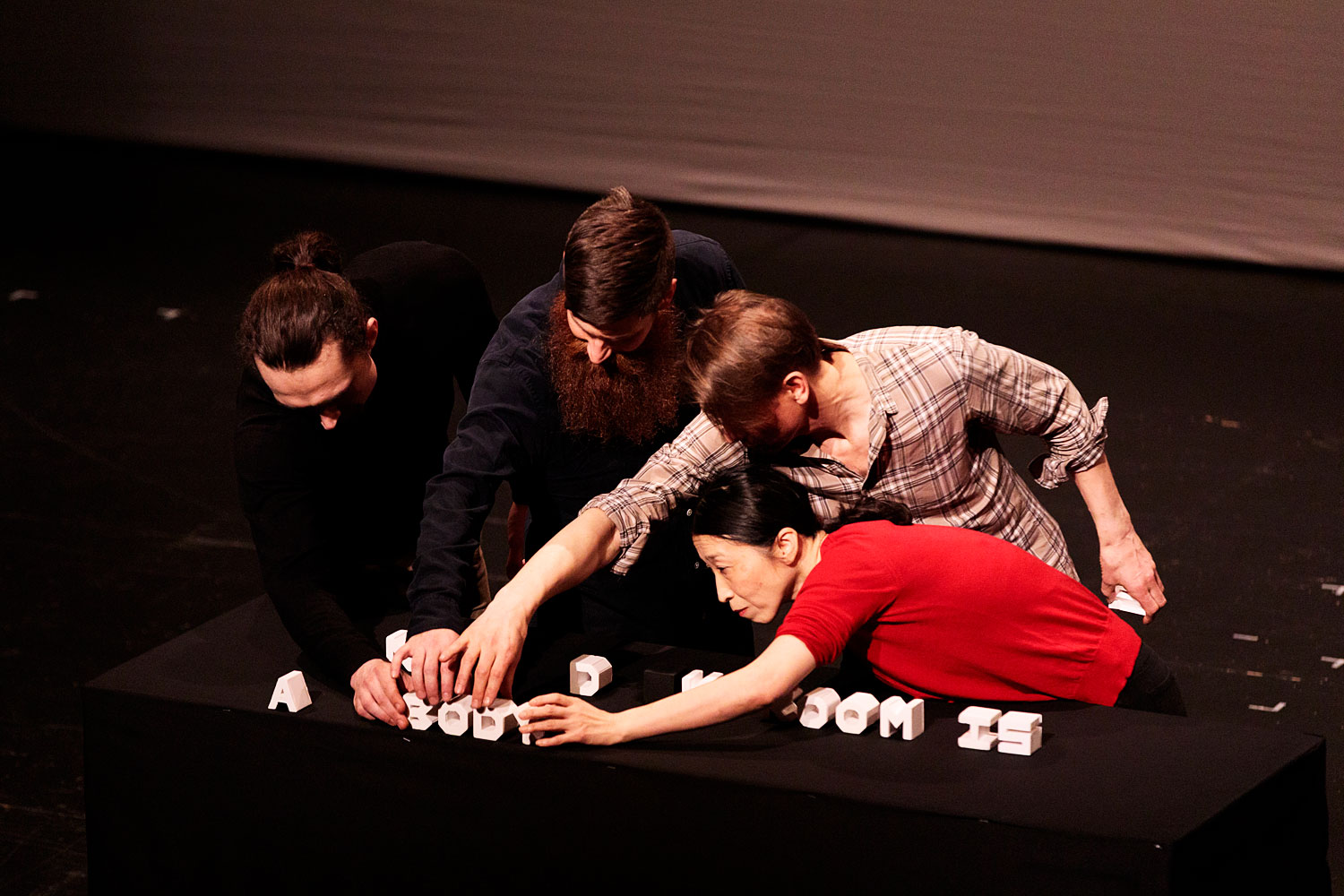 Some of the productions in TPAM Direction are selected by guest programme directors, who are producers and curators from different parts of the world. This year, the programme showcased physical expression–based works that ranged from contemporary interpretations of classical and folk forms to site-specific projects, drag performances and genre-ambivalent pieces.

And although some of the creations are presented as complete productions and some as works-in-progress, they each provoke questions about process and product in their own way.

Process and Product / Private and Public

In the latest version of The Retreat, by Thai dancer-choreographer Thanapol Virulhakul, you could say that the dance began in the four Japanese dancers' bodies and consciousness more than a month before the theatre opened its door to audiences.

The director began the research process in 2017, and The Retreat premiered in Bangkok in 2018 with five Thai dancers. The same year, the production was restaged as part of Ghost:2561 video and performance arts series at Bangkok CityCity Gallery. For TPAM Direction in 2019, Thanapol conducted an open workshop with some of the original cast members and Japanese dancers to further the research. 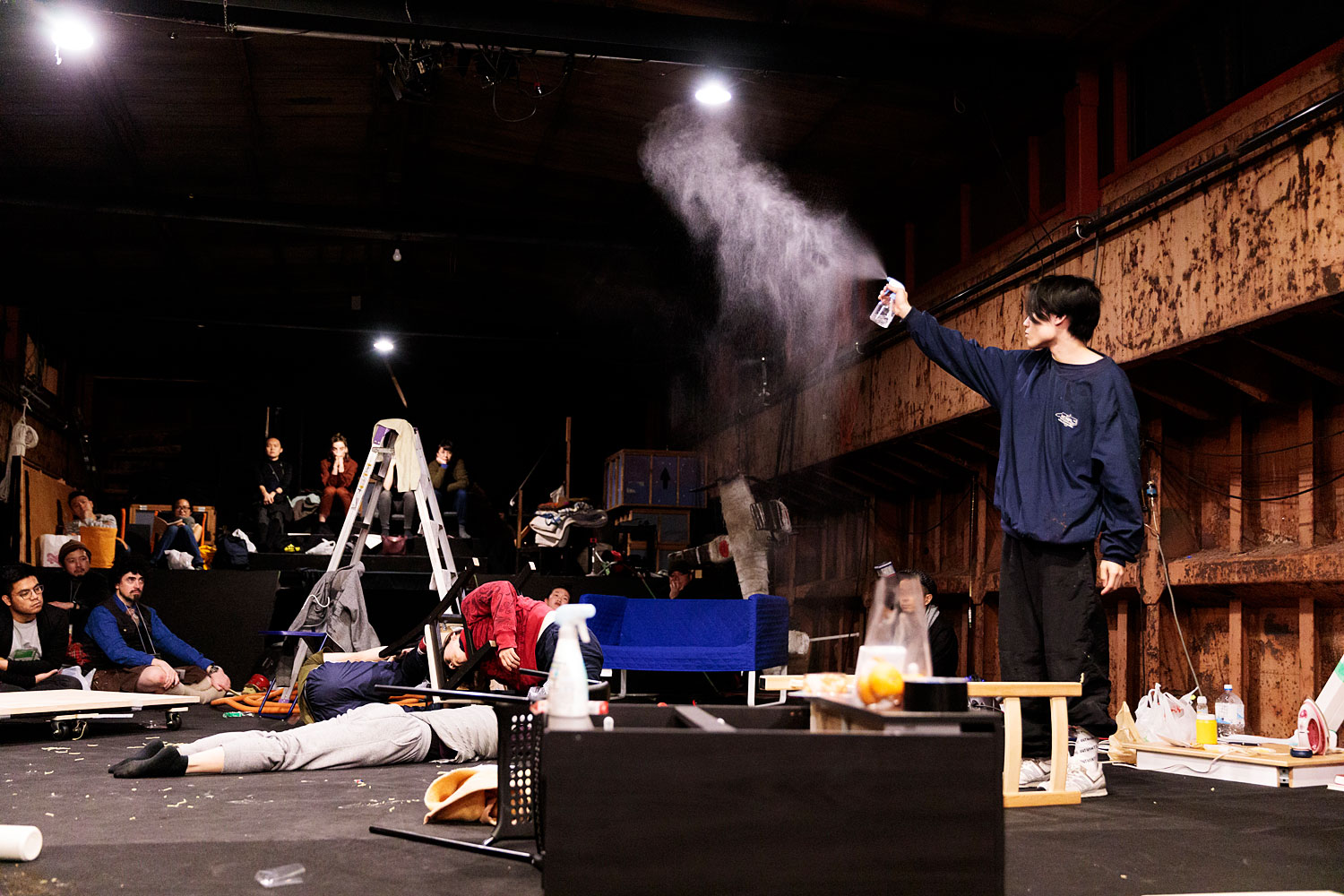 One of the questions at the heart of The Retreat is how can art, or in this case, dance, become more part of an artist's daily routine and consciousness. Thanapol's goal for what he calls a "choreographic research process" is not to produce a choreographed dance but rather a new movement method that heightens the dancers' awareness as those within and beyond the performance context.

People familiar with his work know that Thanapol's creations never resemble conventional dance. He's always seemed to approach dance as a way to explore the human body and choreography as a way to bring the human body under a specific political or ideological system. With The Retreat, he brought the dancers into confrontation with bodies that are not theirs and things that are not human.

For the latest version of The Retreat, Thanapol developed a "dance score" and gave it to the dancers to practise in their daily life a month before rehearsals, which began just a few days before the show opened. The performance we witnessed then was supposed to be only a sliver of the entire process -- of the entire "dance" -- only 60–75 minutes of the dancers' day that was made public to us. The result was scenes of dancers moving and interacting with each other's bodies, objects and their space in strange, puzzling ways, thereby forcing the audience to confront unfamiliar notions of dance, performance and final product. 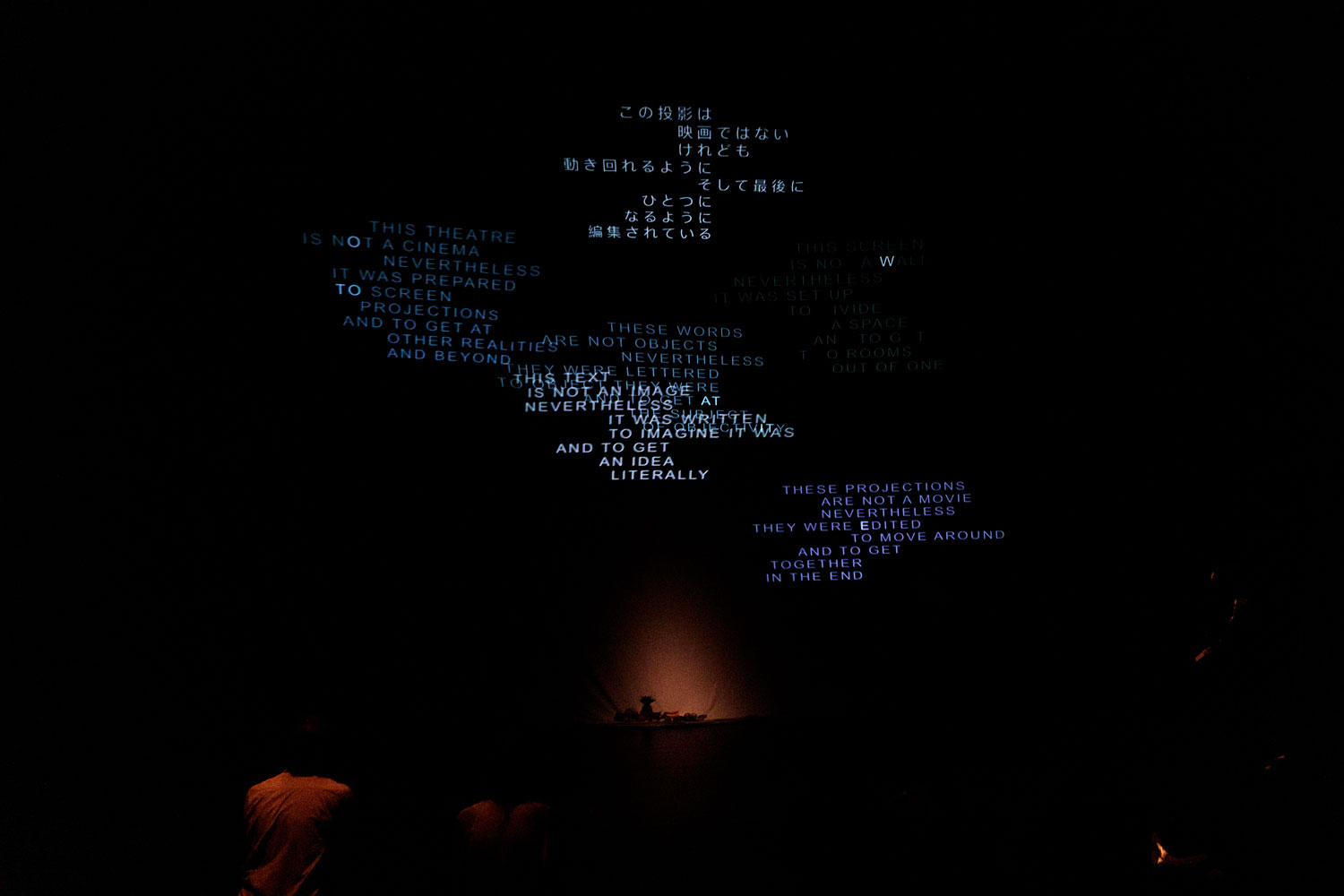 Seksyen 19 -- a dance ritual in a Kuala Lumpur neighbourhood is another project that brings dance into the quotidian and perhaps is more committed to a performance of a ritual than a performance per se. Malaysian dancer Lee Ren Xin has been performing her daily ritual -- walking around and finding places to dance -- in the migrant worker and working class neighbourhoods of Section 19 in Petaling Jaya, a city near Kuala Lumpur.

She transported the ritual to Yokohama, where every day, a map of her route and time of her ritual was posted on the TPAM website. Those interested were welcomed to follow her route, but Malaysian producer June Tan, who selected the project for her third and final year as one of the programmers for TPAM Direction, advised us that it would be better to take a walk around the neighbourhood as it may be frustrating to try to find Lee.

When she performs her ritual, Lee usually searches empty places to dance in and doesn't want people to gather around and follow her, preferring for herself and her dance/ritual to become part of the life there rather than a spectacle. In the video she presented at the sharing session, children and elderly people sometimes copy her movements, and her interactions in Section 19 of Petaling Jaya have led to workshops for children and the elderly asking for exercise recommendations for their bodily aches and pains.

Both The Retreat and Seksyen 19 don't need the audience the way traditional performances do. The Retreat gives us a peek into a private process, a sliver of a day in the lives of dancers as they confront the unfamiliar. Seksyen 19, though taking place in public, is a somewhat private ritual that prefers to initiate interaction than attract attention and spectators. 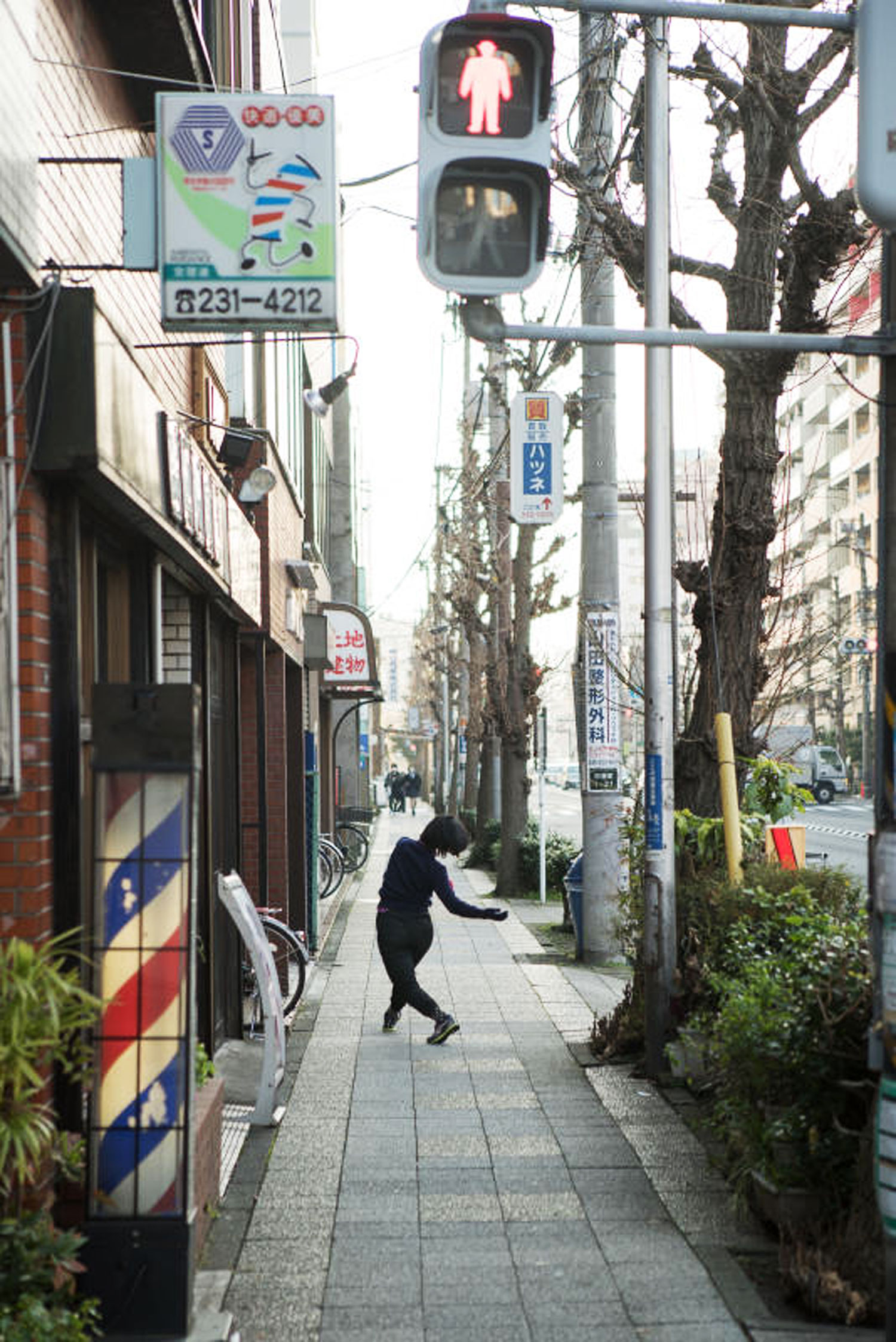 They also both pose questions to the programmers and audience about the packaging and presentation of works-in-progress, works that are continually transforming and works that don't intend to become a complete product, but rather a method or practice like The Retreat and an ongoing interaction with a place and its people from which sprang new projects and relationships like Seksyen 19.

What so tickled the brain and the eye in unwritten conversation was how fieldworks successfully made thought process and imagination -- something private, abstract and intangible -- work, even dance gracefully, onstage.

Working with simple letter blocks, the charismatic performers showed us how one letter can be seen as another letter, then how letters can form a word that leads to another word, which then becomes a phrase, then a sentence, then a short paragraph -- a summary of an idea.

Through one tiny black cube, placed in relation to words, they showed us the power of a blank space -- how our imagination, individual and collective, can fill in, form and transform incomplete phrases and sentences. These performers were not merely writing words and sentences with block letters, they were demonstrating how an idea starts and evolves.

The black cube also serves as a metaphor for theatre -- a blank space that comes to have meaning through our action and imagination. It also speaks of the fleeting nature of idea, theatre and space.

In all three of fieldworks' productions at TPAM, space is malleable and movable, like the flying balloons in nothing's for something that were filled with the cacophonies of urban spaces. We, sitting in the theatre, were suddenly not only in the theatre but surrounded by other spaces, floating above our seats. In unannounced, the theatre felt uncontained as we were left sometimes in complete darkness to suddenly be jarred by bright lights, as we were led around a building, chasing words that climb walls, glide across ceilings and floors and pop up on door flaps. Like ideas in our heads, words, moments and sense of place felt slippery in unannounced.

nothing's for something sets up delightful theatrical mysteries only to unveil the secrets of these tricks. unannounced disorients the audience. And unwritten conversation places the audience back in the disorienting space with remnants from previous performances to present yet another mystery -- that of a creative process -- to take us back to the inception of an idea. At one point, in complete darkness, it situated us in the present with a voice that proceeded to read to us a text explaining the idea behind the piece and eventually telling us about its future, cheekily declaring towards the end, "unwritten conversation is a work-in-progress, forever".

So where does a performance begin? The Retreat, Seksyen 19 and unwritten conversation, each in their own way, play with the idea that it begins outside the theatre. In the body and consciousness of the dancers for The Retreat. For Seksyen 19, it may never end up inside the theatre but begins and ends indefinitely as a ritual. In unwritten conversation, it begins in the mind, continues through their other works and spaces and circles back to the very beginning.

Most process-driven works continue to keep the process and the performance separate. Some never fully arrive at the production stage or refuse to. unwritten conversation made the process performative, playful and interactive. It even seems to poke fun a little of works-in-progress. It turns complete productions into parts of a new process that presents itself as a new creation. It contains the uncontainable, like thought process and present moments.

And it lets them all slip away, only to begin again.