The Bangkok metropolitan area has been in a state of continual change. Gravel roads turned to concrete. Large empty fields replaced with tall buildings and luxurious malls. Public transportation such as the BTS, MRT and buses have been extended to reach people in remote areas. And once friendly people with smiles, Thai people now prefer to look at their smartphone rather than paying attention to others.

"This photo was taken last year when I was wandering around Thon Buri district and was passing an MRT construction area. It took me about 10 seconds to snap this shot. There was the Moon and an interesting moment that night. It reminded me of summer in Japan. People and their neighbours took chairs to sit outside and drank together. It was like I was in my neighbourhood. I was impressed and took a shot," said Japanese street photographer Shunji Dodo when he showed Life one of his favourite images in his black and white photo book, A City Aglow.

The book features 290 photos with 54 selected for display by appointment only at the exhibition under the same title at Serindia Gallery.

"A City Aglow was translated from Japanese phrases referring to a city or an area during dusk which makes people feel warm and lively. The collection was taken by twin-lens reflex cameras from 1984 to 1991 and 2014 to 2019," Shunji said through a translator.

The photographer from Shinsekai in Osaka started taking photos for commercial advertisements while he was a student at Kyushu Sangyo University. The young Shunji was really passionate about photography. In his spare time, he shot about 500 rolls of film in order to improve his skills. After working on commercial ads for a while, he discovered his actual interest.

"There were student movements against the Vietnam War, which made me realise that I wanted to snap that kind of moment. I can shoot any kind of photo including landscape, commercial, candid etc, but I like street photography the most. I'm interested in people. I want to know what kind of person they are, what kind of jobs they have, and what kind of places they live in. A photo of a person can distinguish individuality. This makes photography intriguing."

Before his first visit in Bangkok, he liked to take photos of people in his neighbourhood in Shinsekai. When his American friend saw his work, he told Shunji that Thailand had a place which was similar to Shinsekai and asked the Japanese photographer to take photos in Thailand. 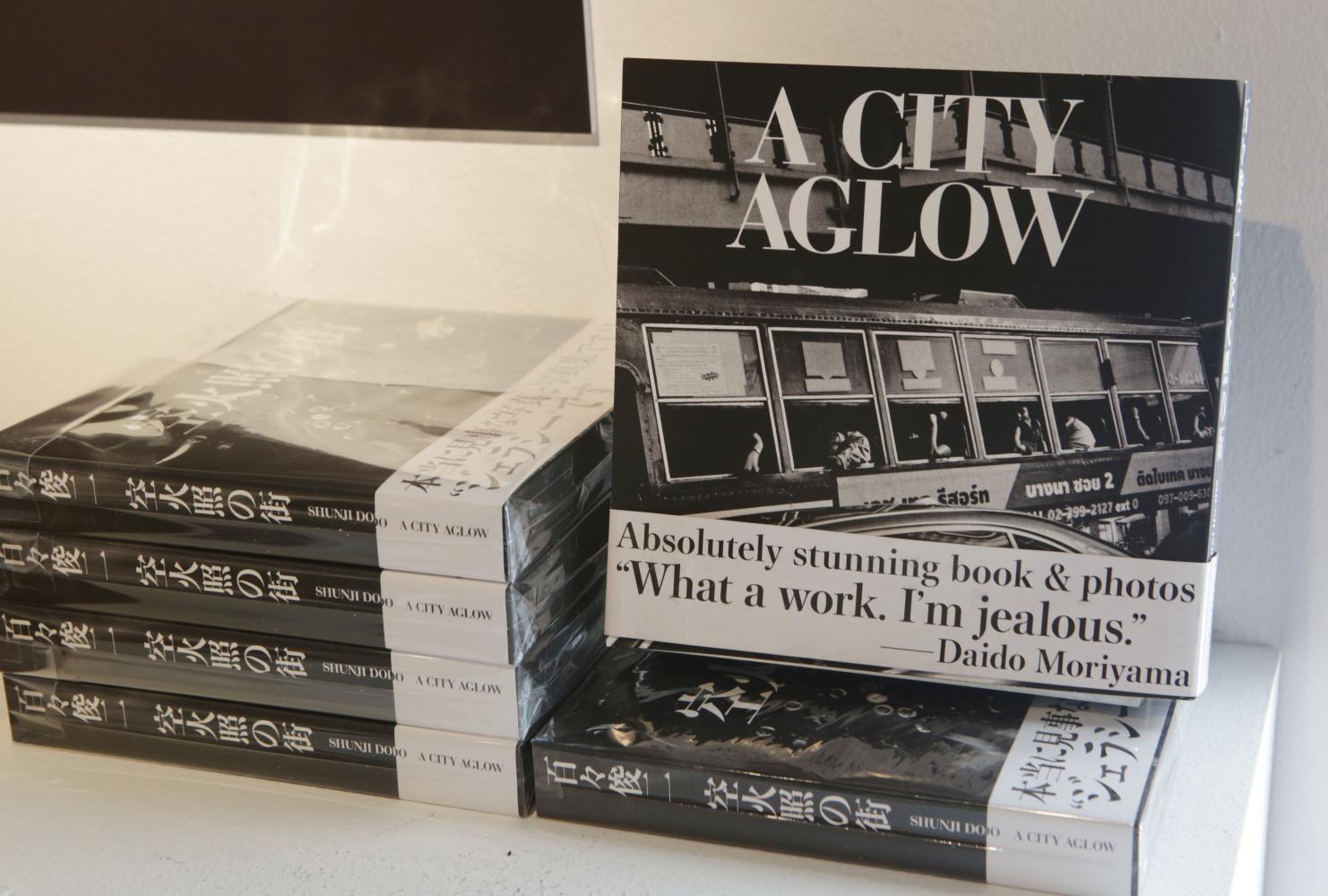 "I came to Thailand in 1984. After flying to Don Mueang Airport, I took a bus to meet my American friend who led me to the Swan Hotel located nearby the Serindia Gallery. I saw the hotel yesterday. It was still there. It reminded me of my first visit to Bangkok. I travelled around the Kingdom by train. I was in Chiang Mai, Ayutthaya, Hua Hin and Pattaya. Among these cities, I was attracted to Bangkok the most and returned to the capital about 10 times."

From 1984 to 1991, Shunji returned to Bangkok several times. He noticed differences between Thai and Japanese culture.

"Unlike Japanese men, Thai men must be drafted to serve in the military though there are recruitment lotteries. And Buddhists are a majority in Thailand. Most male Buddhists must become a monk at a certain age. In Japan, people can choose whether they want to become monks or not," Shunji said.

The photographer left Bangkok for 23 years but then wondered how the city had changed. When he stepped into the City of Angel again in 2014, he was totally surprised.

"It had changed a lot. It wasn't only lots of streets, expressways and cars. There were striking decorations. People dressed up beautifully, but I was shocked to see how addicted people were to mobile phones. Japanese people use smartphones too, but we weren't that addicted. I could see the way people communicated had changed," he said. 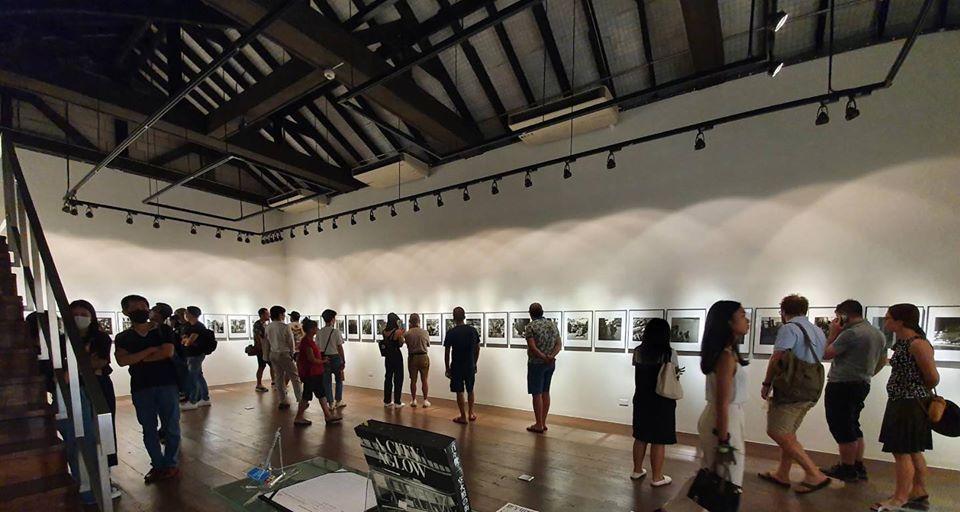 Viewing 'A City Aglow' is by appointment only. Photo: www.facebook.com/serindiagallery

After 2014, Shunji revisited Bangkok to shoot photos several times. He spent around 10 days to two weeks per visit. He changed accommodation each time, so he could see a variety of people and architecture. Things have changed a lot, but he was particularly impressed with an area around Hua Lamphong station.

"That area didn't change at all. It is a centre of connection to every region. We can see people from other regions travel to this developed city. The design of the station building is terrific. I heard that the station architecture will be changed. I hope it can be preserved the way it is. That's unfortunate if it will be changed," the photographer said.

"The Chao Phraya River is a part of Bangkok making the city attractive. We can walk around an area and then take a boat to do some sightseeing in another part of the town. In the past, a street was chaotic with lots of motorcycles and tuk-tuks and loud vehicle horns. Currently, there are still lots of vehicles, but I see less black smoke and hear less loud horns. It seems like the capital has grown from a child into an adult who is more generous to others."

When he was asked to compare Tokyo people to Bangkokians, Shunji said Tokyo and Bangkok are centres for people from many places. Both cities mix people from different areas together. 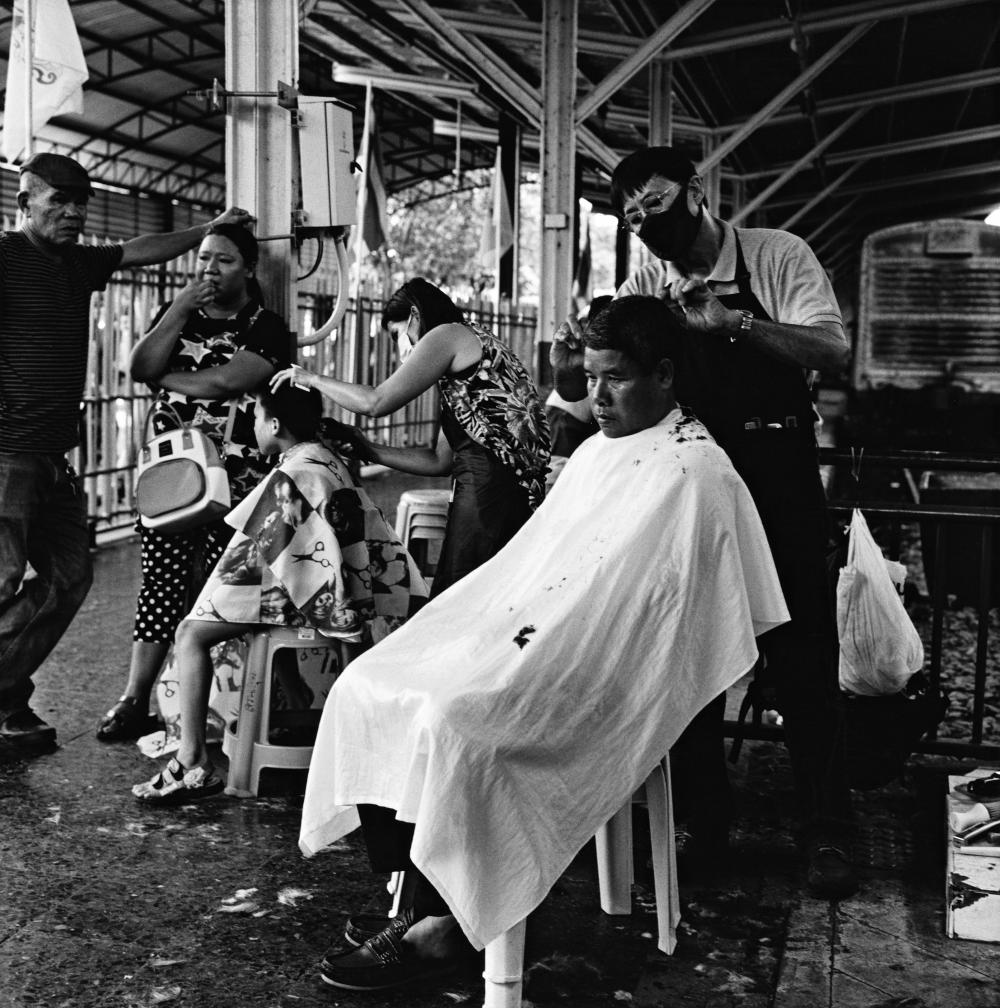 "Bangkokians are laid back. They aren't strict to a standardisation of procedures. They try to do things in Thai style and hope it will turn out fine. Thirty years ago, when having appointments, Thai people came late by a couple of hours. At that time, I couldn't contact them and ask what was going on. However, in these recent years, people are more punctual, but still late by an hour. Perhaps, there are mobile phones, so we can track where they are. And comparing to Japanese women, many Thai women work outside home. I often saw many female sales staff and waitresses more than male employees," said Shunji.

A City Aglow isn't arranged chronologically. The photographer hopes people who have the photo book will see the link between each page themselves and he wishes to hear feedback from visitors who see the exhibition.

"If I have an exhibition in Tokyo or Osaka, people probably won't get into the photos. I discussed with the publisher that I wanted to demonstrate my works at the place where I photographed the photos. I would like to hear how Bangkokians think about photos of Bangkok captured through my lens," Shunji said.

"A City Aglow" runs by appointment only at Serindia Gallery, Charoen Krung 36, until March 31. Admission is free. Selections of the photos will be on view at Open House Bookshop by Hardcover, Central Embassy after it reopens. Signed copies of A City Aglow photo books are available at https://serindiagallery.com/. Visit facebook/serindiagallery for more information. 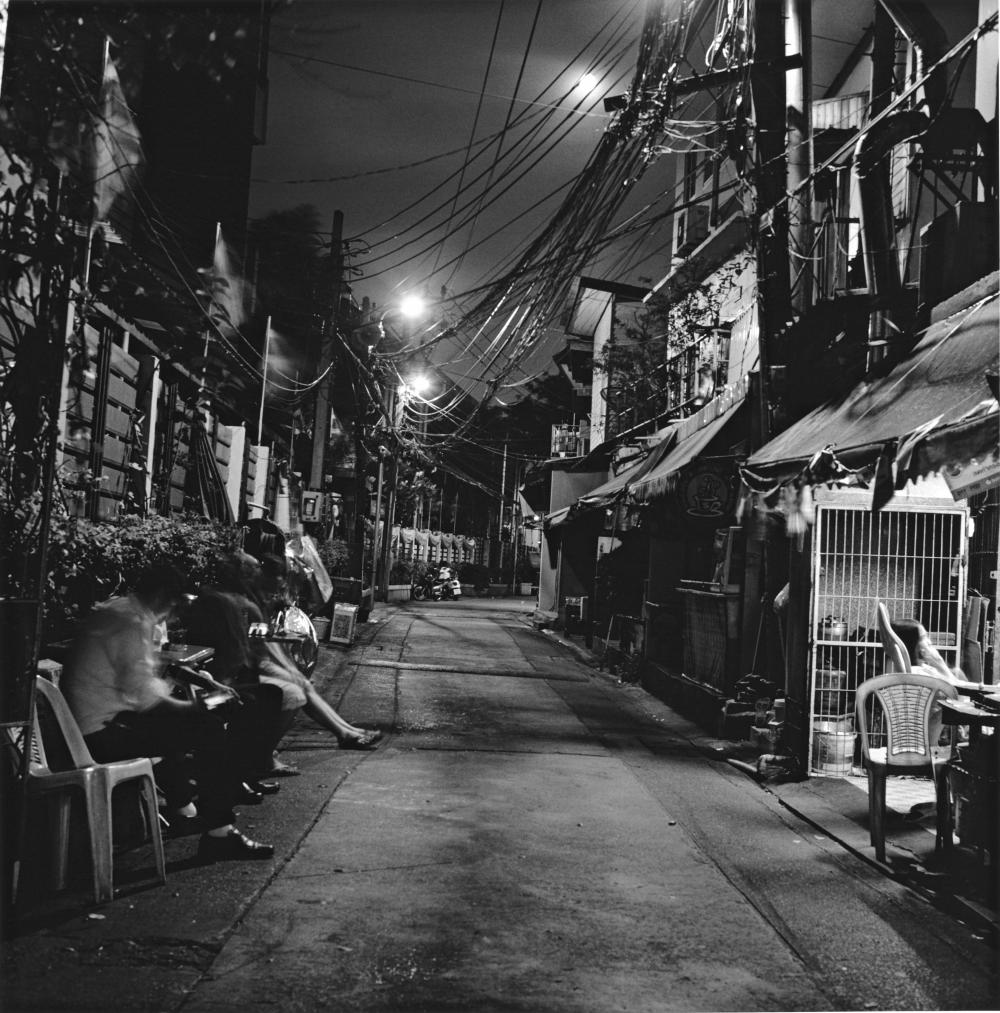 This shot in Thon Buri reminded Shunji of his neighbourhood in Japan. Photos courtesy of Shunji Dodo 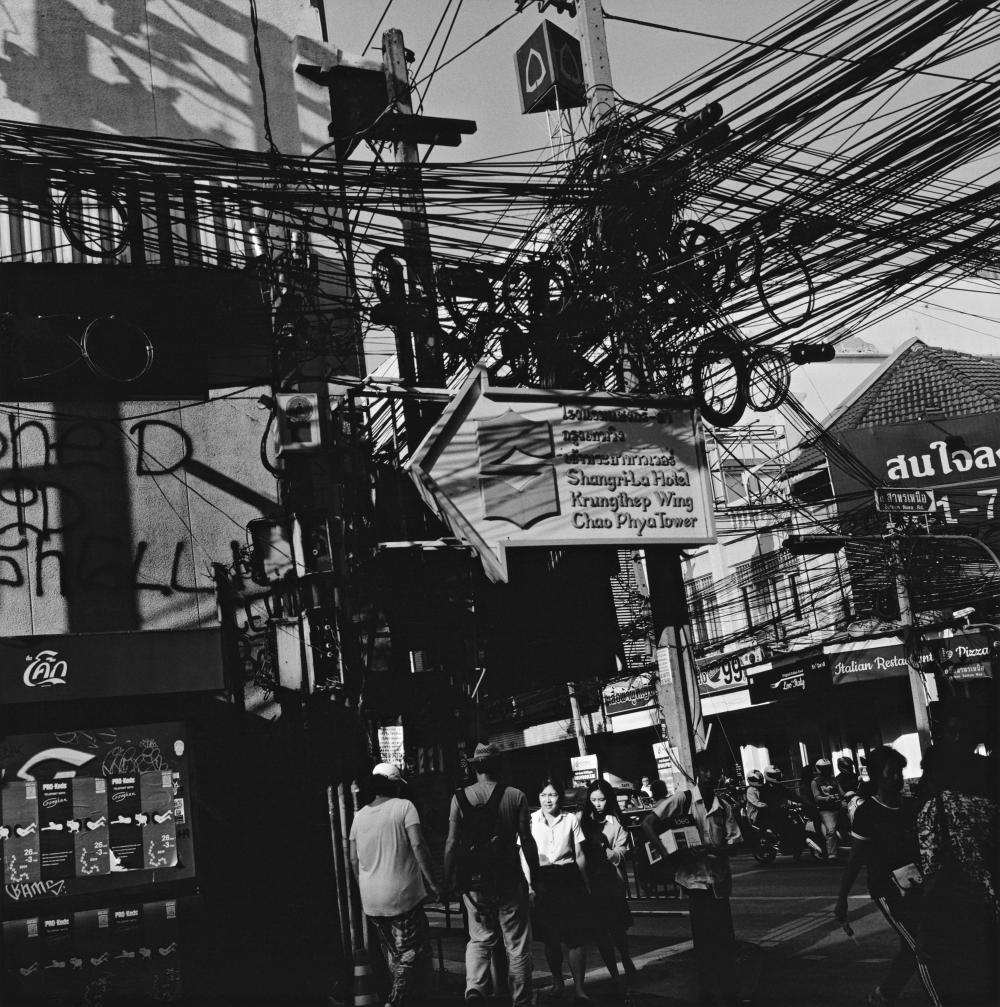