Many Thai filmmakers would agree that our movie industry is in the rough. Several obstacles are preventing it from flourishing. A group of film professionals recently gathered for a plenary discussion held at Unesco Bangkok to address the challenges of, and the changes they want to see in, the Thai film sector.

For the past few years, there have been about 60 Thai films released each year. While a few take off, most struggle to perform at the box office. Many attendees referred to the problems that lie in the structure and foundation, which constrains development and provides little support for local productions.

Thailand used to have hundreds of standalone cinemas. Today, people's choices are limited to two chains of multiplexes and what those chains choose to put on offer. A duopoly. There are a few alternative, independent screening spaces out there, but not many.

Katrina Grose, representing De Warrenne Pictures, which produced Nang Non (The Cave), expressed her concern that Thai films generally have one week to make it in the cinema before many get their time slots cut or are even removed. Even then, they only get a few screening sessions per day, with the times often allocated to unpopular slots, when people are still at school or work. The distribution system is also problematic.

"There is no time- and revenue-sharing. And if the film happens to be released at the same time as Hollywood blockbusters, then tough luck. Most of the screens would go to them," said Katrina, who suggested imposing a quota to prevent big blockbusters from hoarding all the screens, and to allow more chances for local films, at least in their first week of release.

Thai films that get extended time slots and screening weeks are those that really become hits, usually from big studios and with big stars, or those that are actually co-produced by the multiplexes themselves.

"Most Thai films struggle to make money. The foundation is really off. No matter how much the investment, it's hard to make a profit. There is also very limited support from both the public and private sectors. The film industry here, at times, feels like something people just don't care about," Katrina continued.

As Thai films are struggling for room to breathe, investors too become hesitant to chip in large sums of money to each project, as their chances to become profitable are slim. In turn, that affects the amount of movies made, as well as their quality and production values.

Today, many filmmakers would look to the Korean film sector with admiration, and perhaps envy. Parasite's triumph at the Oscars served as a solid reminder, and proof that strong support from all sectors -- state, private and general-audience -- has helped push the South Korean film industry to the forefront of the world, exporting its culture and sparking fan tourism that in turn benefits the country itself in many ways. 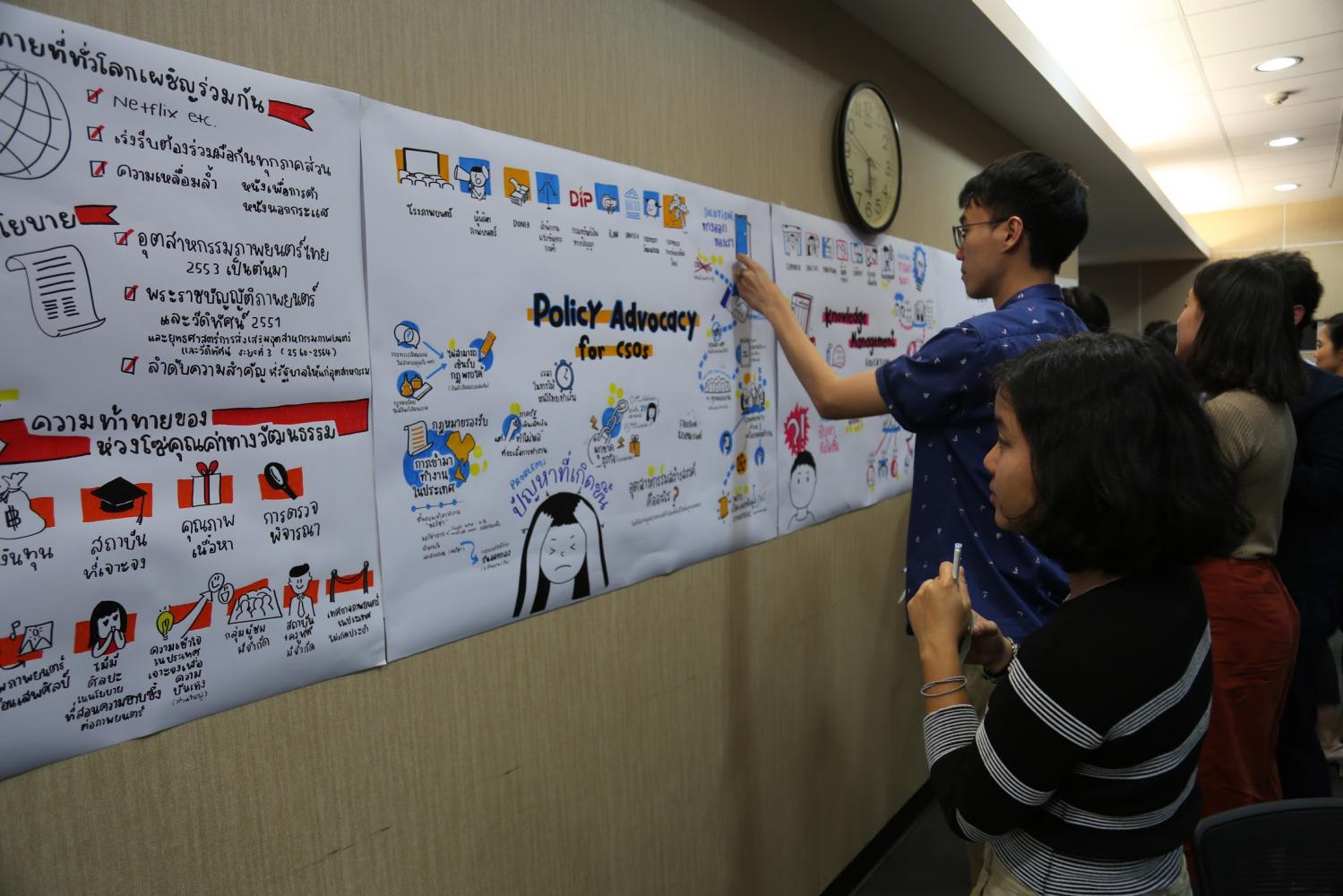 Participants inspect infographics made by the BlackBox Team.

Thailand is moving forward at its own speed and momentum, and it sure needs all the support it can get. Puangsoi Aksornsawang (Nakorn-Sawan) said that independent films run into problems with their budgets, especially when it comes to marketing. This affects the level of visibility a movie will have among audiences.

"Nowadays, we mostly just promote our films on Facebook, when they should be able to go further than that. Only people who have been following them in the first place will be aware of them," said Puangsoi, who believes marketing is one area where the state could come in to help.

Katrina, as someone who works closely with international productions that film in Thailand, said these projects also face many hiccups. While the government offers incentives to encourage international projects to film in the country, getting the visas and permits for cast and crew can be troublesome. Their scripts also have to be pre-approved by the film board before production can start.

"Altogether, that have deterred many investors," said Katrina. "Ministry officials really don't get the moviemaking process and what goes on during preproduction, production and postproduction. In order to fix this, we need to have a film commission with power, and it has to consist of people who are either in the industry or at least get what this industry is about."

The talk of establishing a film commission is something that has long been discussed and brought up in many circles, though it has yet to come to fruition.

Tanwarin Sukkhapisit, attending the event as both filmmaker and a member of parliament, said she decided to join the political arena because of the struggles she's had from her time in the film industry, as other filmmakers have highlighted during the discussion. In Tanwarin's case, it was more severe, as her controversial film -- Insects In The Backyard -- was subjected to censorship that eventually led to it being banned for containing "immoral and pornographic scenes".

She fought long and hard in court and, after agreeing to make a certain cut in the film, the ban was finally lifted after seven years.

"I want to become the minister of culture one day. I want to tear down old policies and change it all," said Tanwarin.

At the event, Unesco also launched the "Mobilising Film Professionals In Thailand" project, which is financed by the Japanese government. It is set to encourage regional co-operation and will be implemented in Thailand, Indonesia and Vietnam. The project aims to professionalise the sector, and enhance the skills, body of knowledge and collaboration among filmmakers and policymakers in Asean. 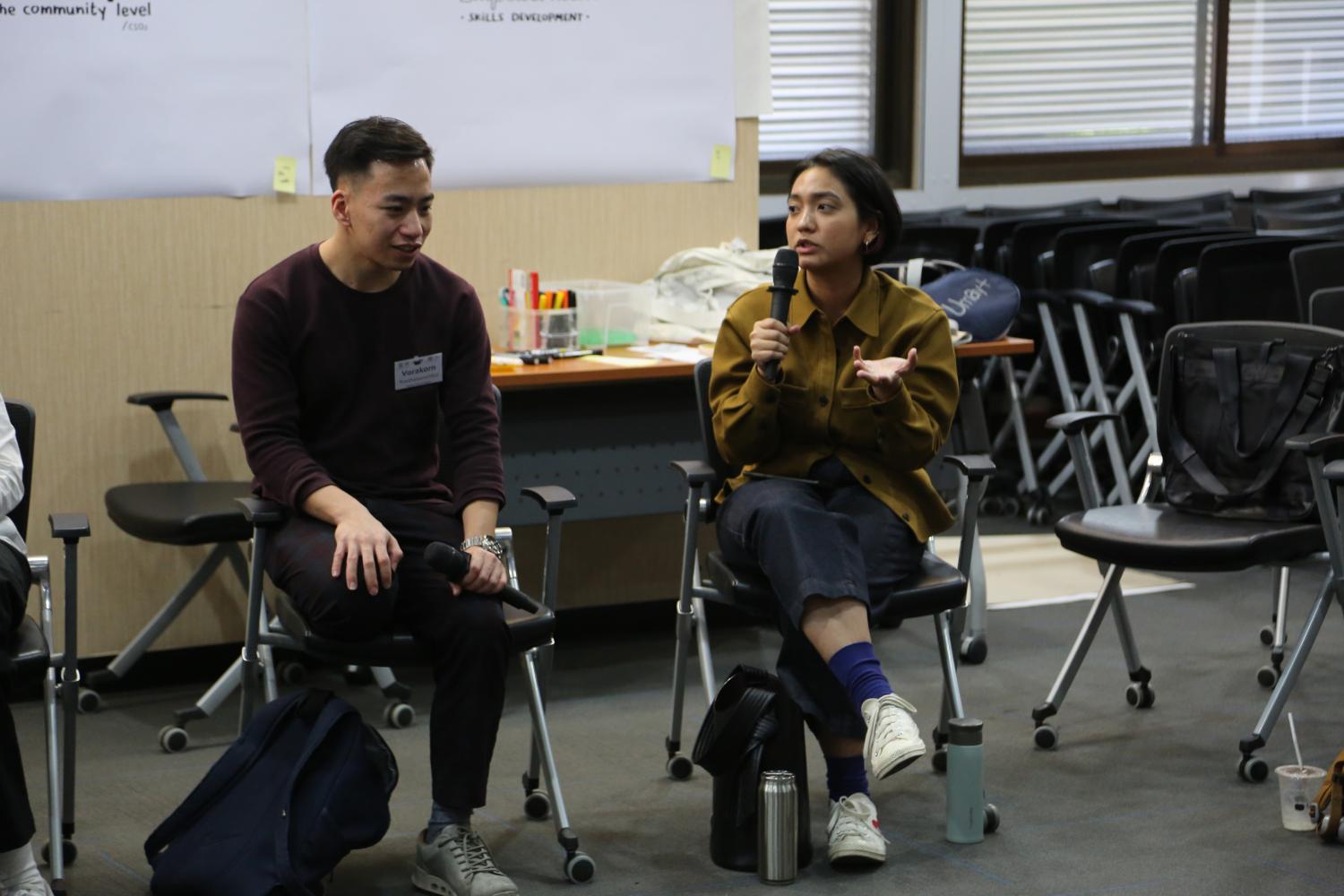