It isn't very often that a harpist sits in front of an orchestra, but such an attraction drew out a larger than normal audience in mid-February in the Small Hall of the Thailand Cultural Centre for the Royal Bangkok Symphony Orchestra's Classical Concert No.1 of the new season, conducted by Vanich Potavanich -- RBSO director since 2018. 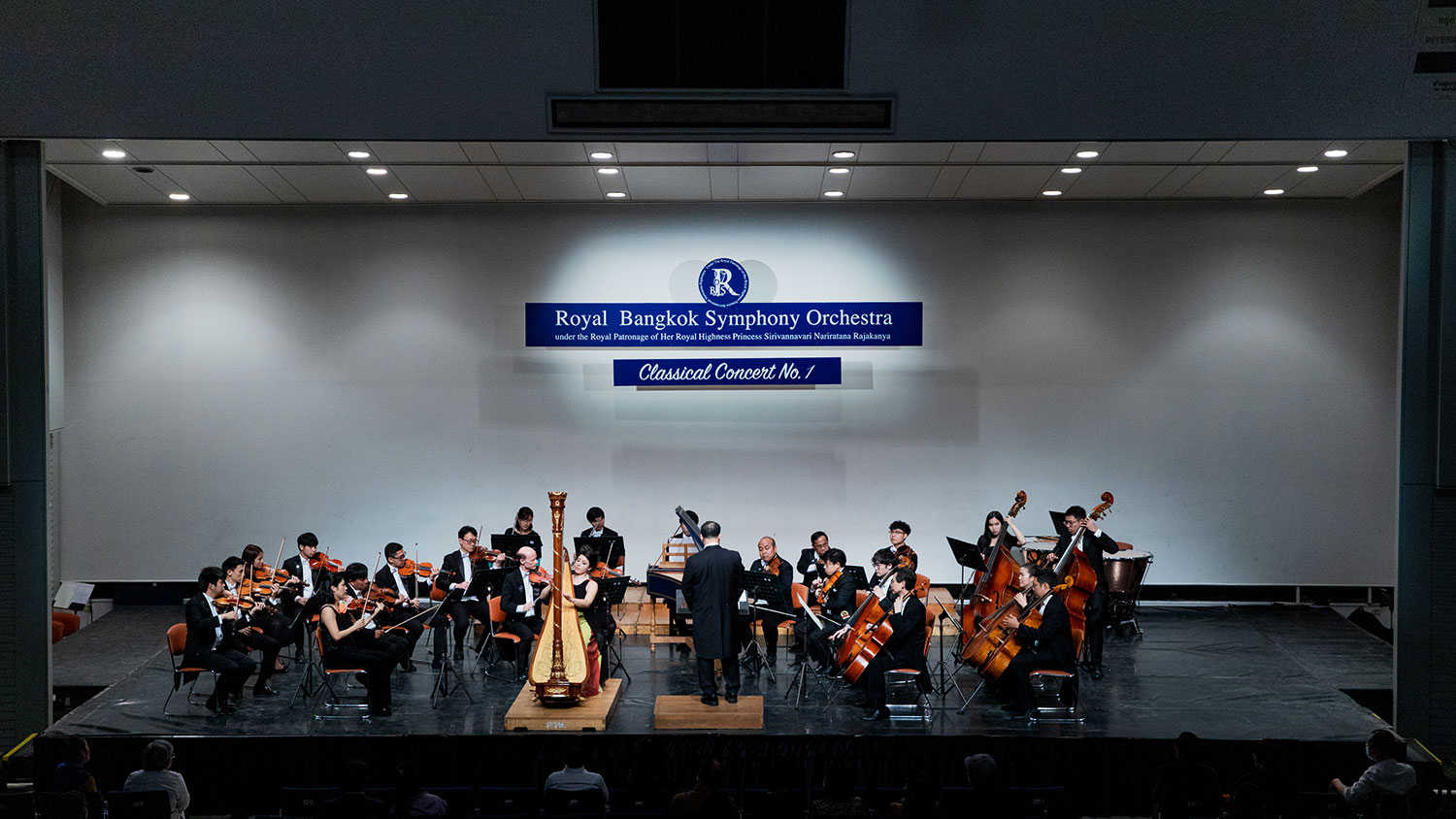 By definition the solitary harpist always plays solo parts in an orchestral context, of course, but on this occasion the world-renowned performer Anneleen Lenaerts, from Belgium, truly stole the show with Handel's Harp Concerto In B-flat Major Opus No.6 and Debussy's enchantingly beautiful Sacred And Profane Dances For Harp And String Orchestra. Appointed principal harpist of the Vienna Philharmonic in 2010, she is a performer of the very highest calibre and pedigree.

A multiple competition award winner who is enjoying the view at the very top of her profession, it was especially warming to observe her easy rapport with the RBSO. Handel's concerto also exists in a version for chamber organ and orchestra, a somewhat different experience altogether, but what we heard here was a delightful exercise in precise economy of means. Tasteful arpeggiations and scale passages from Lenaerts were nicely accompanied by a reduced string section and unobtrusive harpsichord (played expertly and supportively by Trisdee Na Patalung -- one of Thailand's own foremost classical musicians), to achieve a pleasant Baroque texture of the most genial kind.

The simple and straightforward, quite uncomplicated melodic material of Handel here calls for no more than the politest approach to tasteful phrasing, and the soloist did exactly what is required. In this style of music the harp is not the loudest of instruments by any means, and Vanich had to work hard to keep the soft bed of string sound at a low enough dynamic level.

After Handel, Lenaerts appeared on stage for a second time for a real treat, and indeed the runaway highlight of the evening -- Claude Debussy's delectable Profane And Sacred Dances. It was in this impressionistic idiom that her abundant qualities of musicianship really shone. Debussy always represents the very epitome of sophisticated sonorities of almost infinite subtlety, and Lenaerts coaxed from the beautiful instrument -- which was a wonder itself to behold in simply visual terms -- an incredible range of vibrantly soft tone colours to match the composer's rich, evocative harmonic palette. The waltz-like delight of the second dance was especially well executed.

Brought onto stage for multiple curtain calls, the soloist eventually rewarded the audience with a special encore of an entirely different, jazz-inspired nature. Yet more extended techniques were displayed here, demonstrating her abundant virtuoso credentials. 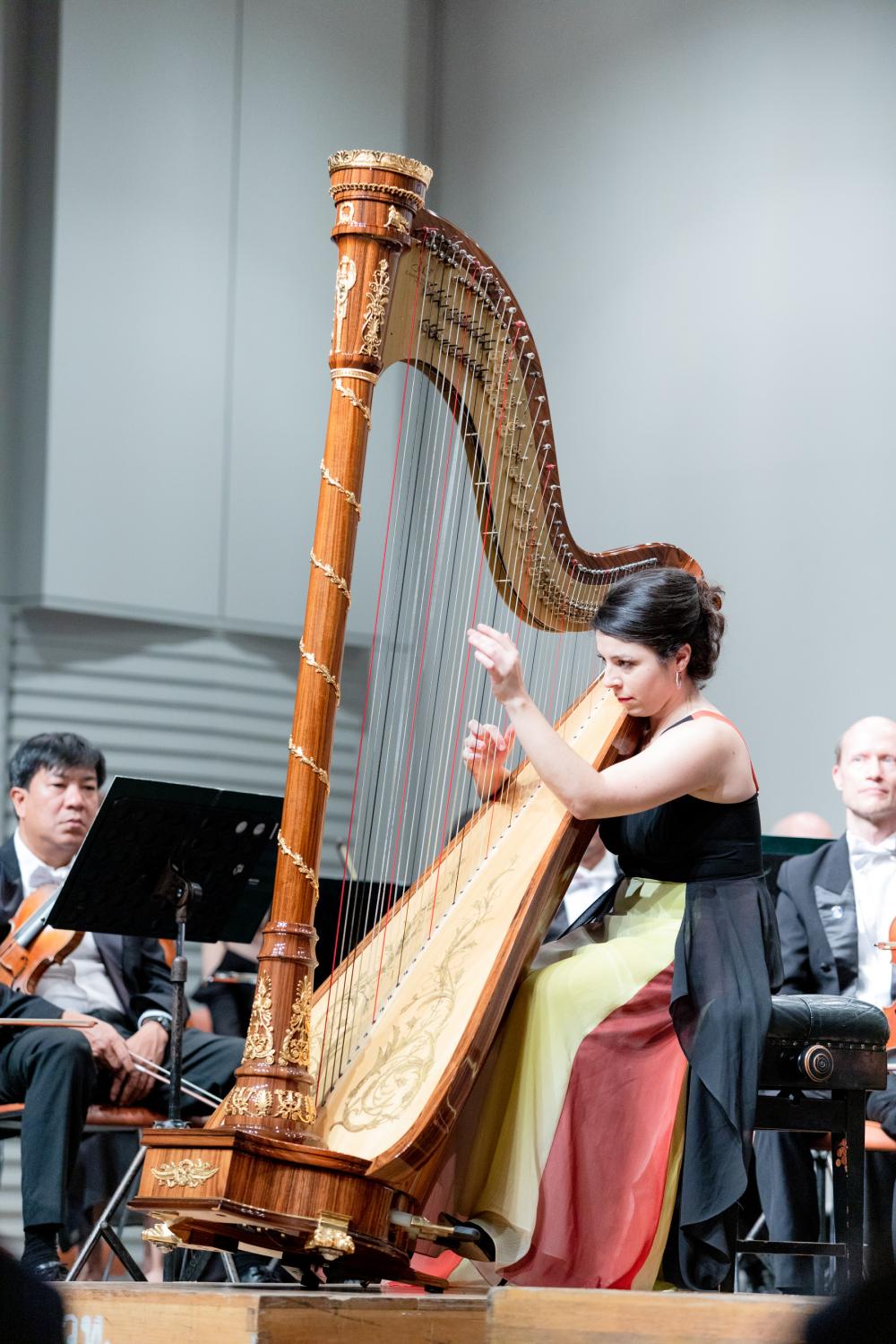 The relatively lighthearted flavour of both harp pieces was in stark contrast to an explosive rendition of Beethoven's Coriolan Overture, which got proceedings under way. A work wrought with tension, it is an exemplary example of his trademark style of alternating between extreme dynamics of very loud and very soft. The powerful opening gestures immediately cast a dramatic atmosphere, after which insistent and pointed quaver entries in the strings took over. The chromatically intricate quaver inner-workings of the viola section were pleasingly tidy, with their tight rhythmic ensemble then joined by celli.

Haydn's Symphony No.101 In D Major was aptly nicknamed The Clock after its very successful premiere in London's Haymarket Theatre in 1795, because of the continual "tick-tock" nature of the andante second movement. Therefore a test of any orchestra's sense of precise pulse, it was interesting to observe the RBSO play this extremely exacting, metronomic musical style after the rubato-laden sound universe of Debussy. After a drawn-out slow introduction, the vigorous first movement proper immediately presents considerable challenges for the first violin section in particular, and apart from the occasional out-of-place note in this department, the players managed the unrelenting challenges of their part quite commendably overall.

The universally-known andante then certainly lived up to the expectations of the work's monicker, with an impassioned middle sturm und drang episode receiving some notably committed playing. The ensuing minuet was itself taken at an extremely healthy tempo, almost Beethovenian in its sense of urgency, while the contrastingly calm trio featured some superior, lovingly phrased flute passages from Teerat Ketmee. Meanwhile, the hushed hurdy-gurdy style string accompaniment here was also very effectively shaped.

And so to the frenetic Vivace Finale, which opened with an almost inaudible string texture -- a sure sign of good rehearsal preparation and fine bow control -- leading to an even more enjoyable release of energy as the woodwind, brass and timpani joined for one of Haydn's most satisfying symphonic movements. The celebrated, scurrying double fugue which starts in the second violin section was a particular joy to hear, leading ultimately to a radiant final coda.