Back in the day when Dr Rungsrit Kanjanavanit was a high school student, his sister handed him a telescope so he could take a closer look at a flock of birds jumping on a Jamaican cherry. Through the telescope, the vivid colours of red and yellow scarlet minivets and golden fronted leafbirds mesmerised him. Ever since then, he has been attracted to feathered creatures and has become an avid birdwatcher.

A cardiologist at the Faculty of Medicine, Chiang Mai University, and the founder of the Lanna Bird and Nature Conservation Club, Dr Rungsrit said that as a kid, he liked fables about animals and was keen on drawing animal pictures. Inspired by a book titled Travel Diaries Of A Naturalist by Peter Scott and a journal by birdwatcher and artist Kamol Komolphalin, the cardiologist and conservationist began to draw things he saw while birdwatching.

"I started a journal 30 years ago and drew anything I saw. But mostly, I have been fascinated by birds, so I focus more on them. In the beginning, I was blind to plants until my sister criticised that a tamarind tree in my drawing was hideous -- totally different from a gorgeous bird. I then observed trees more," said the cardiologist. 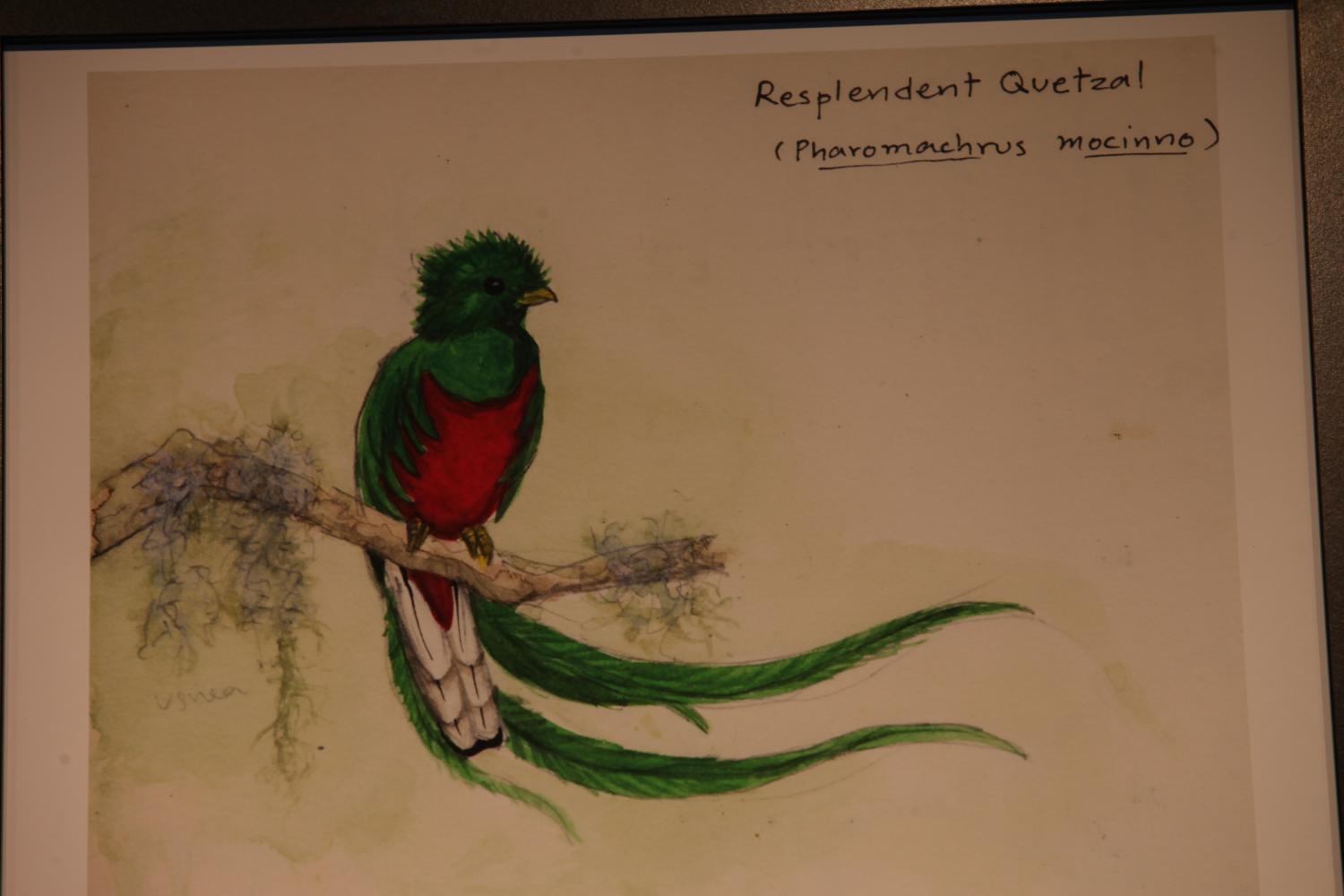 Above Right  The resplendent quetzal, a holy grail of birders.

From 15 journals completed over 36 years, his striking sketches and watercolours of birds and animals and informative descriptions have been displayed at an exhibition, "Dr Birdman: Mhor Mong's Nature Diaries", hosted by Galerie Oasis.

"When I draw a bird, I connect to it. It isn't a bird which flies past me anymore. I see it as an individual and its characteristics. My journal simply records my memory. When I turn a page, I can recall what happened on that day. Taking photographs is great as it can record things accurately. Nevertheless, when drawing, I concentrate fully on it. The outcome depicts an intense memory which I draw realities from and not imagination; except in the case of the Princess Sirindhorn bird, or white-eyed river martin," Dr Rungsrit said.

"At present, most people are disconnected from nature. They know less about the lizards in their homes than K-pop stars. My paintings may encourage people to see the beauty of nature, especially since Thailand has many kinds of birds. I hope the exhibition will stimulate people's curiosities about birds and nature and they will begin to reconnect with it. If people fall in love with nature, they will be gentle with their surroundings." 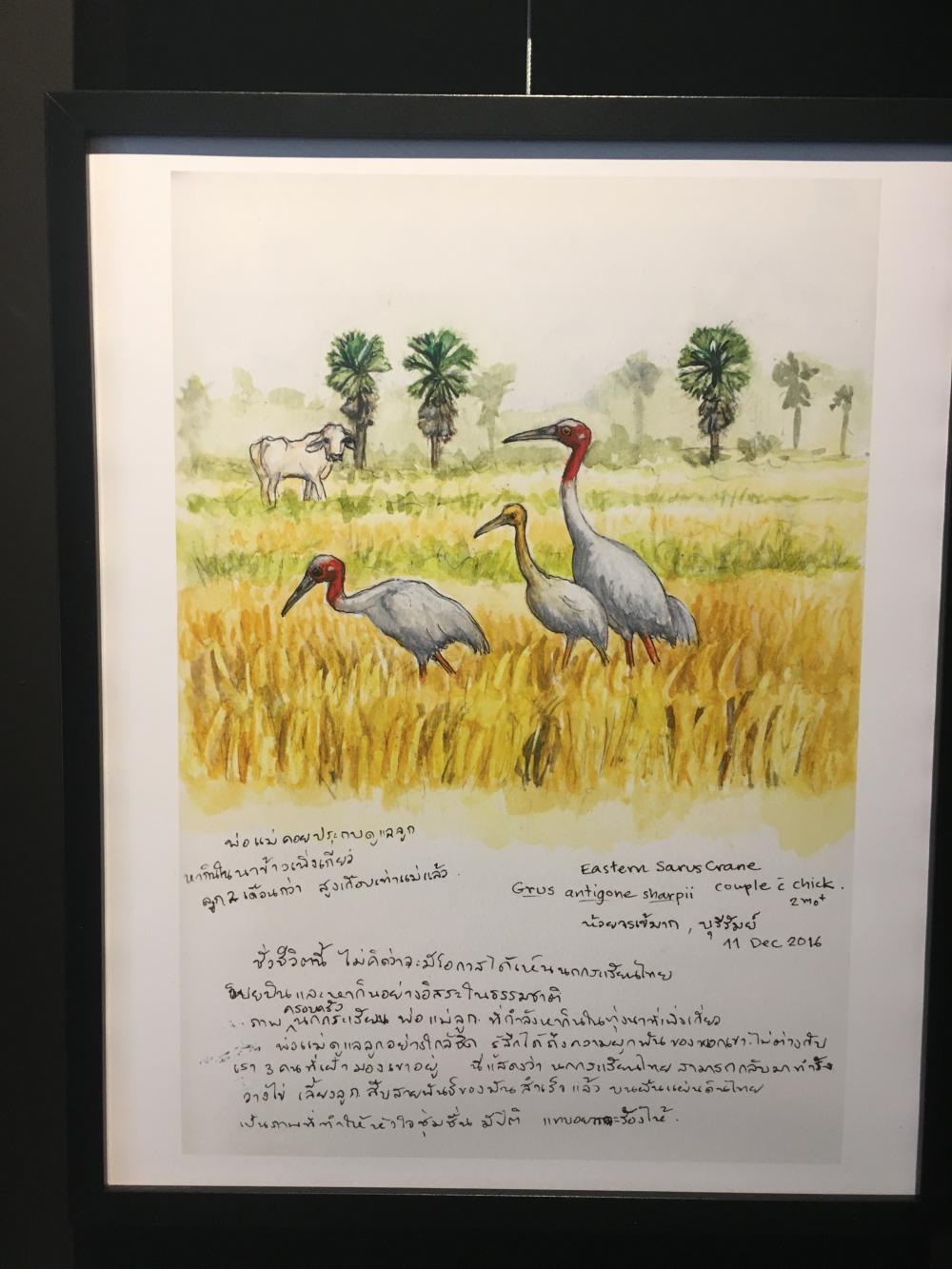 Above  Eastern sarus cranes were able to reproduce in Thailand. (Photo: Suwitcha Chaiyong)

In addition to drawings and paintings in his journals, there is also a 174-minute film with the same title as the exhibition. In the film, the naturalist shows his 15 journals, spontaneously turning a page and sharing intriguing stories of the artwork. Unfortunately, Cinema Oasis which screened the film has temporarily closed due to coronavirus outbreak. As a conservationist, Dr Rungsrit has taken people, especially children, to experience bird walks for 40 years so that they can learn more about nature. He believes that birds are the ambassadors of nature and attract people to enter woods.

"I want people to learn about nature and to feel inspired. If I take them to see geckos or skinks, it will be difficult [to feel that way]. To see red and yellow scarlet minivets flying together or to hear the beautiful voices of white-rumped shama is exciting. They encourage people to get close to nature. We have to accept that not every animal has star qualities. While pandas have had their own TV channel, people have no interest in millipedes and earthworms due to their bias. People choose to focus on beauty. Therefore, if we have birds as ambassadors, people will be interested. They will want to know what kind of trees they sit in, what kind of food they eat, and which kind of forests they live in. Moreover, if they want to preserve birds, they will also want to preserve their habitats," Dr Rungsrit said. 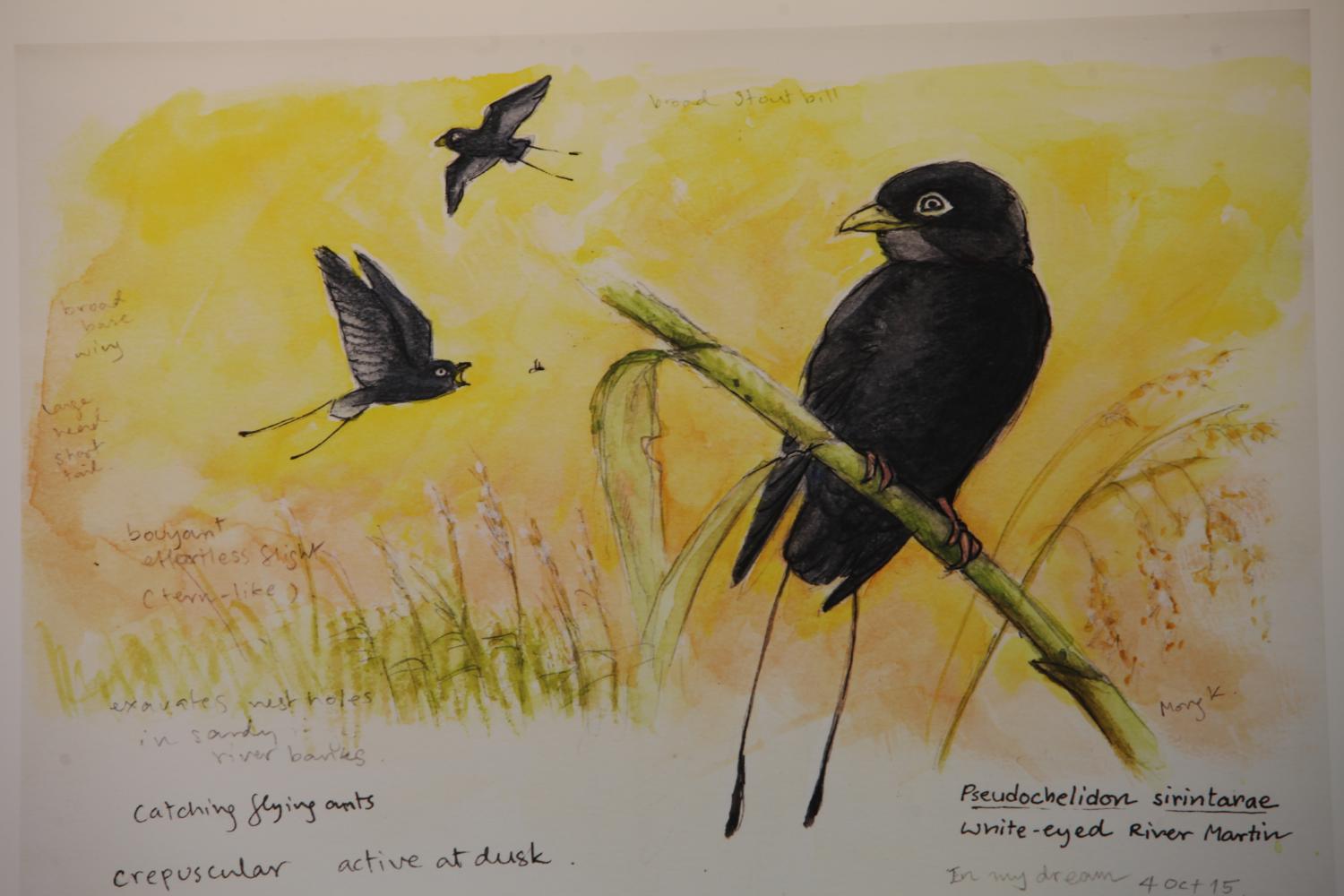 Right  The Princess Sirindhorn, or white-eyed river martin, was the only bird Dr Rungsrit did not draw from experience due to it likely being extinct.

Seeing thousands of birds in several countries, the conservationist has inspired us to learn more about the creatures. A rare bird, the resplendent quetzal, is one such animal.

"It is one of the most gorgeous birds on Earth. It is a holy grail of birders. Birdwatchers are sad to see the quetzal die out. It is a bird that many would like to see at least once in their lifetime. I travelled to the Mountain of Death, or Cerro de la Muerte, in Costa Rica to see the bird and it took a couple of days. The resplendent quetzal had jewel beetle colours with red around the stomach area. To see a quetzal in real life was indescribable. I felt blessed by nature to see that bird," said the naturalist. 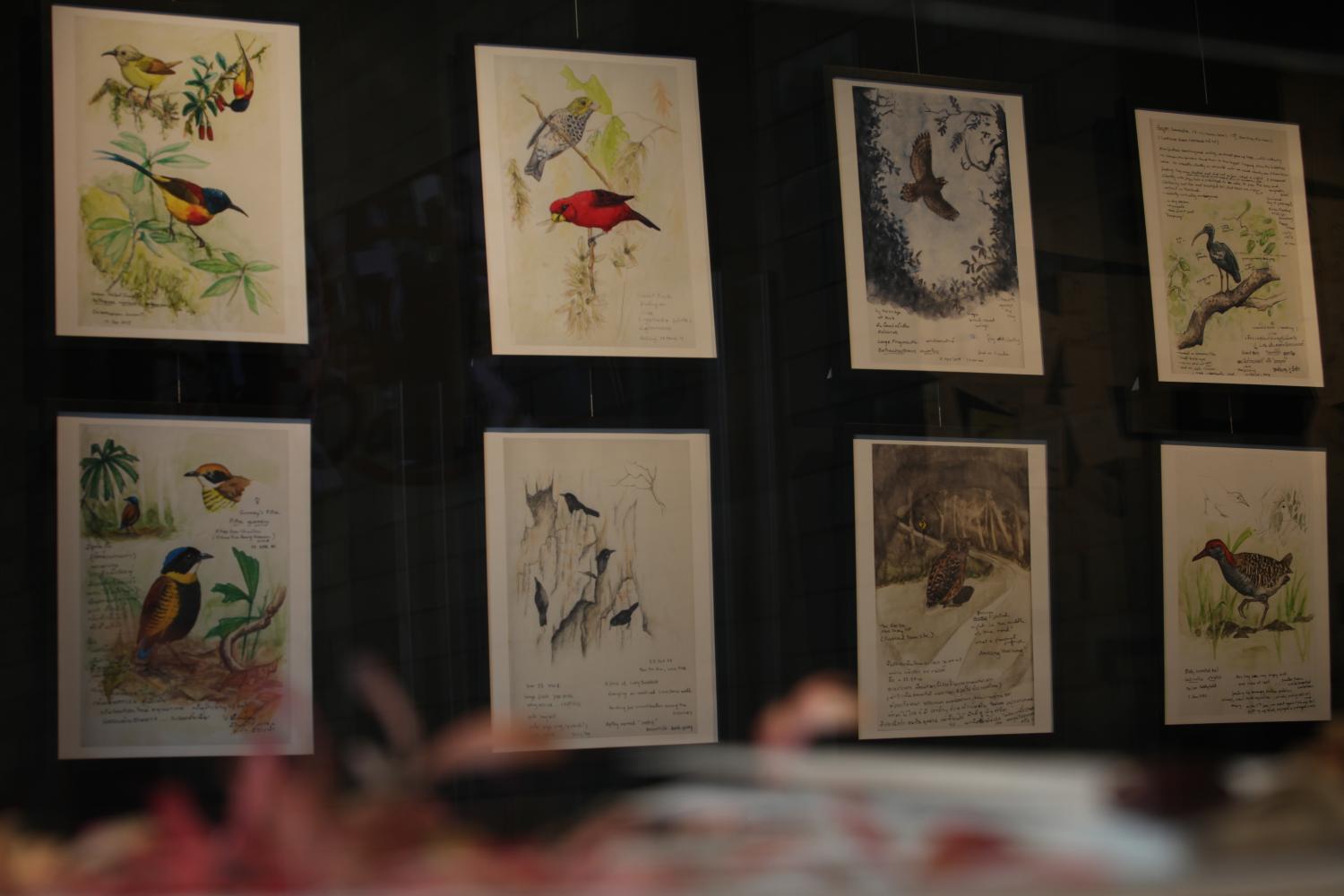 Below  Various kinds of birds from his 15 journals.

Another intriguing feathered creature is the eastern sarus crane which is among 19 species protected by the 1992 Wildlife Protection Act. It was extinct from our country for several decades. However, in 1997, the Nakhon Ratchasima Zoo was successful in acquiring cranes.

"They brought cranes from Cambodia which were able to successfully reproduce. The cranes were later released at a reservoir in Buri Ram. I never thought that I would ever see them again. I was touched. On the day I saw them, they had a child with them too," he said.

The crane isn't the only bird species threatened by extinction. The spoon-billed sandpiper is also critically endangered. 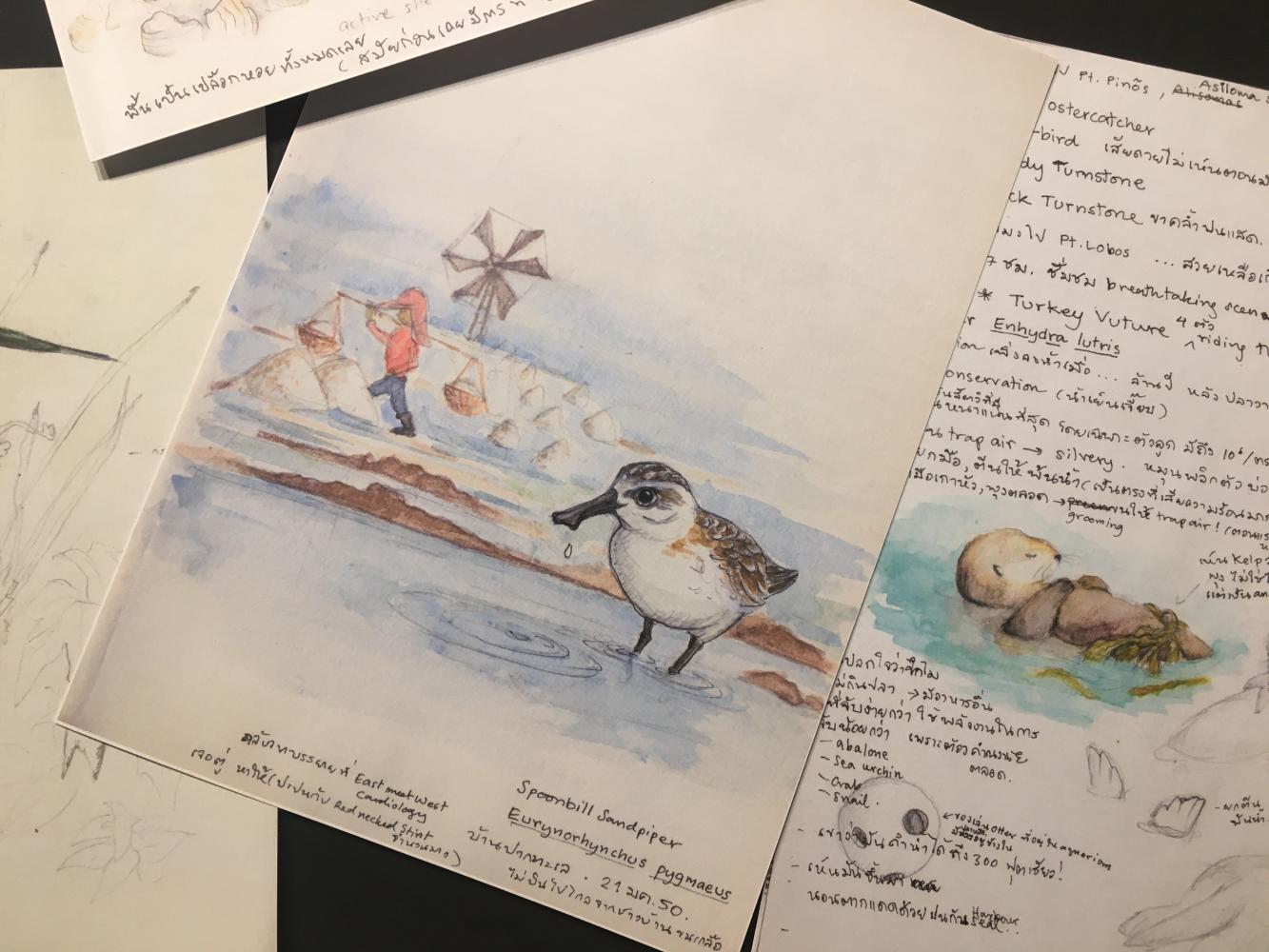 The Bird Conservation Society of Thailand has raised funds to buy land for them and has already successfully bought a salty farm. Yet, the birds still need more support. Ten types of watercolour paintings by Dr Rungsrit are available for 1,000 baht each and all proceeds will go to secure the birds.

"There are less than 200 spoon-billed sandpipers in the world. During winter, less than 10 of them fly to stay in salt farms in Thailand. The Bird Conservation Society of Thailand bought land for them because most salt farms have changed, which is why we need to secure them now. The proceeds from my paintings will go to build their home and to hire caretakers for them," said Dr Rungsrit. 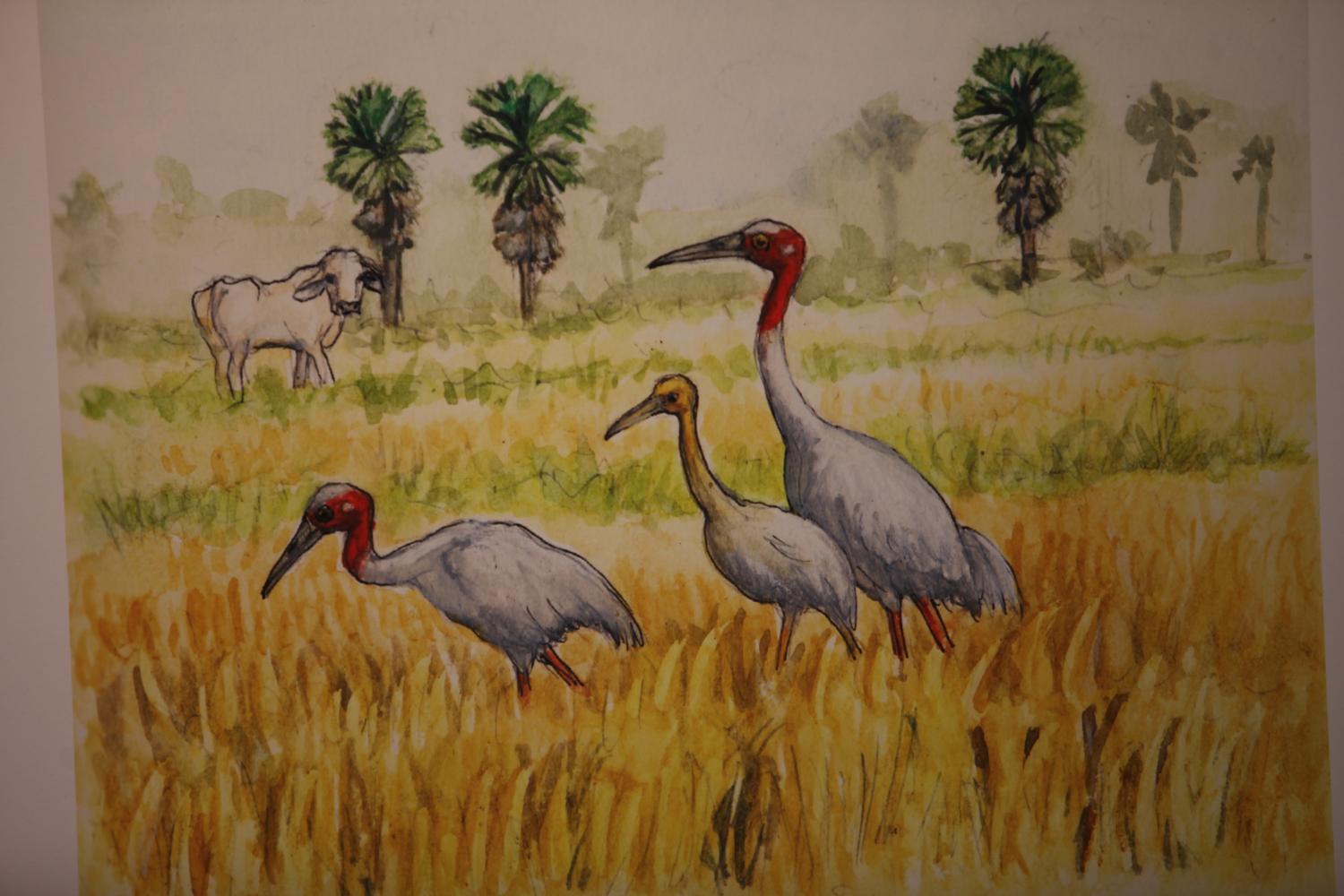 Eastern sarus cranes were able to reproduce in Thailand.

Working with patients and nature for several decades, the cardiologist has seen environmental problems affect everything. However, nature conservation is an approach to solve problems at the root cause.

"The Covid-19 pandemic was a result of intrusion into nature as people ate wild animals. Moreover, diabetes, heart disease, blood pressure and mental illnesses have a root cause in lifestyles that aren't in harmony with our physiques. After the agricultural revolution, people stopped eating a variety of food. The industrial revolution has allowed for convenient lives but it has also led to sickness. We should learn about nature, respect it and live with it," Dr Rungsrit concluded.

'Dr Birdman: Mhor Mong's Nature Diaries' can be seen at facebook.com/rungsrit.kanjanavanit. To purchase his paintings and support the spoon-billed sandpiper and their caretakers, go to facebook.com/galerieoasis.bk. For more information, send a Facebook message or email to galerieoasis.bk@gmail.com.

A chance to see rare textiles