Chronicling the past
Life
Arts & Entertainment

When the People's Democratic Reform Committee (PDRC) held a mass rally against former prime minister Yingluck Shinawatra in 2014, WTF Gallery & Cafe hosted the "Conflicted Visions" exhibition and questioned if people could coexist despite different ideologies. A few weeks after the show ended, a coup took place and today Thais still live in a polarised society.

To mark its 10th anniversary, the gallery has reunited six veteran artists for the "Conflicted Visions Again" exhibition to illustrate Thailand's political and social landscape over the past six years.

"Back in 2014, the PDRC held a series of prolonged mass protests and many people were killed in bombing attacks around its rally sites. It had also set up an art lane as people were arguing about hate speech. I felt this wasn't the way of art, and artists ought to have open minds. This sparked the idea of opening a space in which artists from various sides could express their political perspectives and attitudes through a collection of creative artwork," said curator Somrak Sila.

"We had to go through several matters until we got the government in this current form. So, I wanted to explore their viewpoints of politics and society over the past six years. I realise that the artists have changed and become more open but their standpoints are still apparent, however, they don't attack each other or raise contradictory issues."

On the gallery's 2nd floor, one of the artists, the photographer Miti, has created a sticker book titled Thai Politics No.8 (Dear Leader), which is placed on a podium making it seem like a reception corner. The book, which features screenshots of Gen Prayut Chan-o-cha's television broadcasts, allows visitors to choose emoticon stickers to express their feelings towards the prime minister. 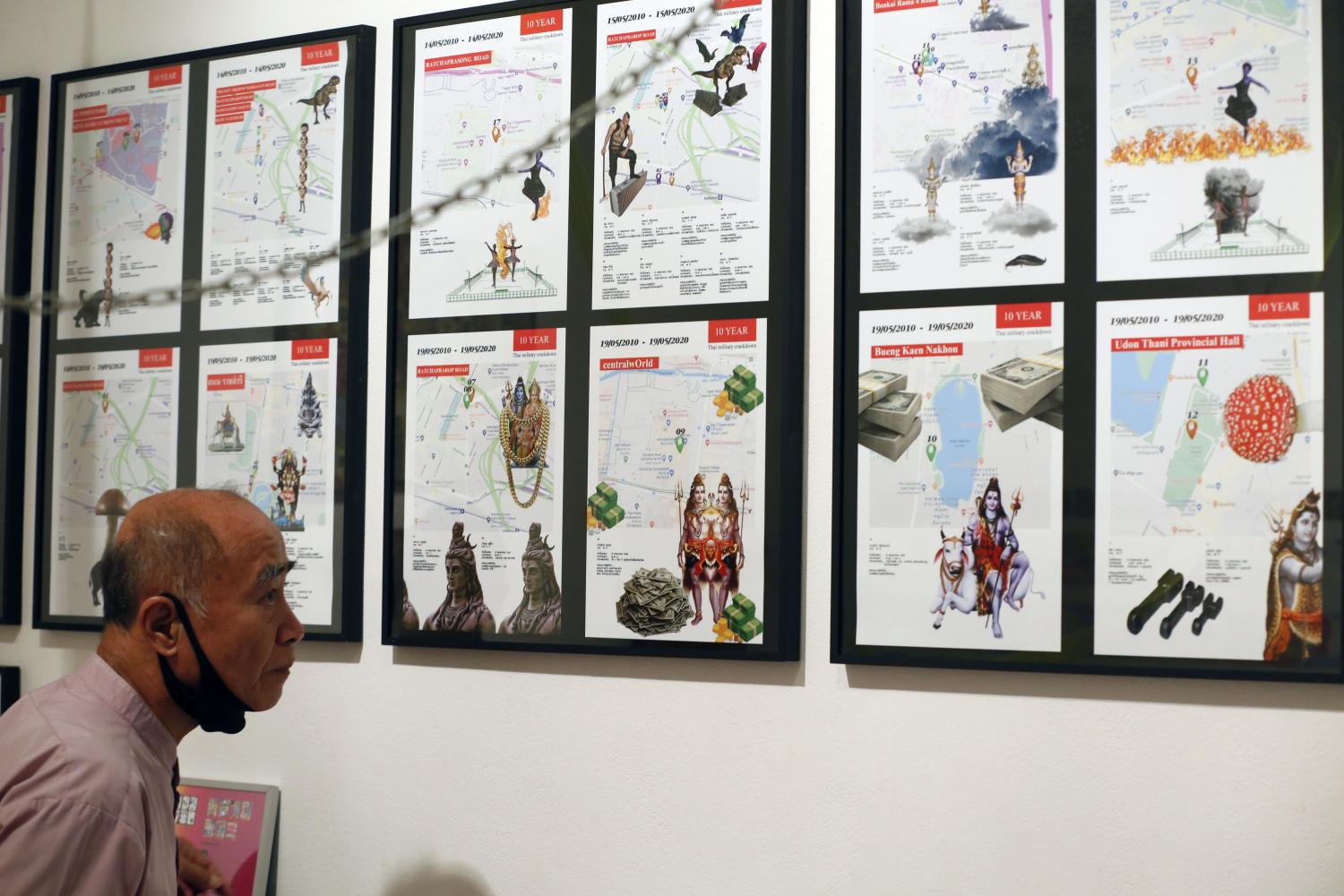 "Apart from photography, I have also produced a book about Thai politics which spans a decade. The idea came from the closure of a private group on Facebook which had provided portraits of Thaksin Shinawatra with added photoshop effects. I questioned if these images ought to be stored as archives of Thai politics," Miti said.

"We think pictures will be on a digital platform forever but that's not true. This reflects the unstableness of the online medium. However, books are cheap to make and they are also easier to carry around than other kinds of artwork," Miti added.

Interested in visual culture, Miti has accumulated images from a variety of different sources. To explore visitors' viewpoints, he mimicked children's sticker books to crack jokes and refer to what the youth will face in the future. Children are like a blank canvas and their future is the outcome of the past and present.

"With a colourful backdrop of mountains, the pictures of Gen Prayut can reflect his notions and attitudes. My work is like an archive. Moreover, it's not essential to indicate what is good or bad as people can find information about each issue on their own. I don't want my followers to think I have a bias," he said. 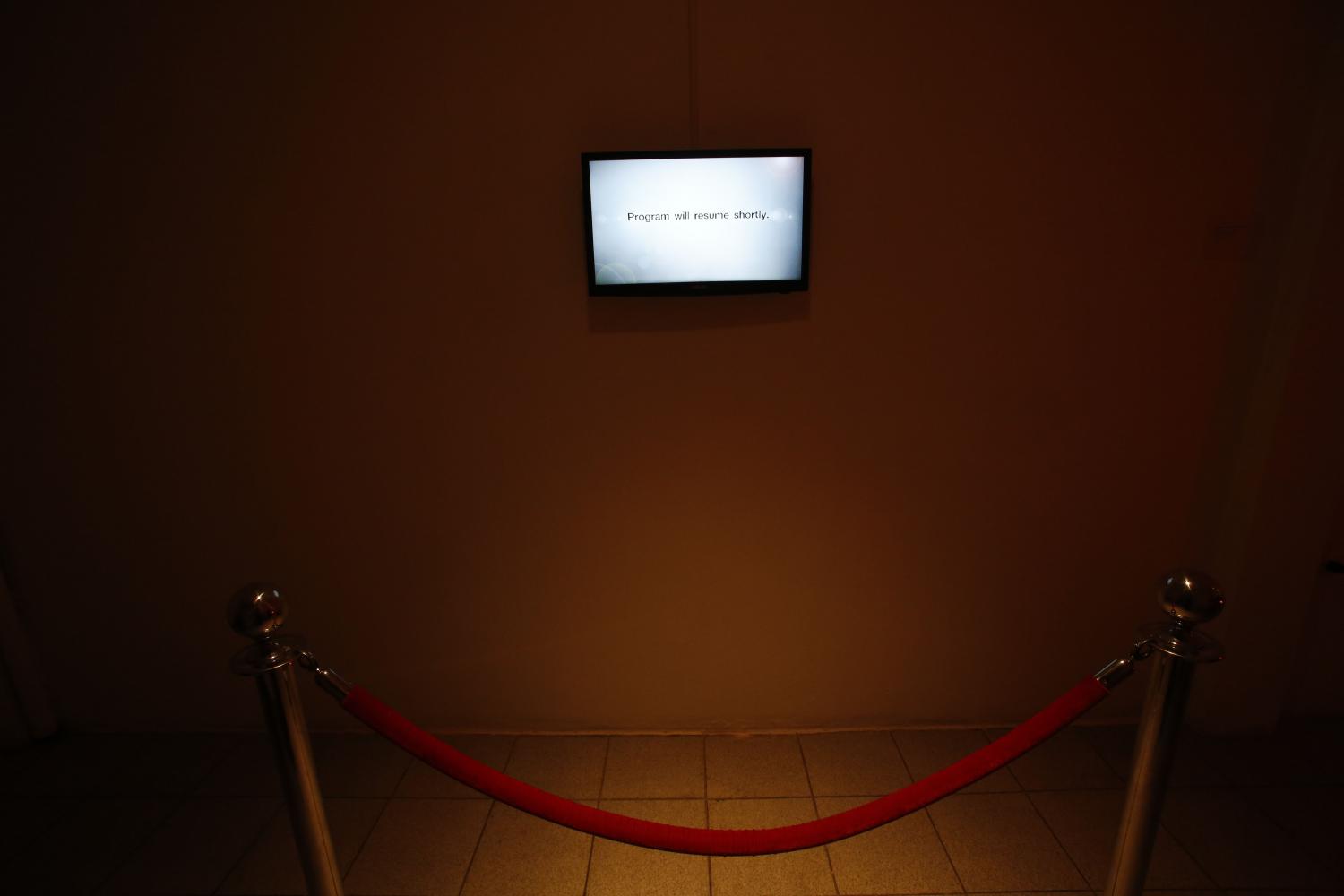 "Now that the Covid-19 pandemic is affecting everyone, we have to realise that several of the government's policies don't work. Thailand still has a low number of infected patients but entrepreneurs and freelancers are struggling to survive. Compared to what Taiwan has done, the government should have better solutions."

Meanwhile, another exhibition -- created by Pisitakun -- titled Iconoclastor Stickers & Military Track Down also covers the walls of the exhibition. Using several techniques, his vibrant stickers capture political events in Thailand ranging from the Palace Revolt in 1912 to the Siamese Revolution in 1932, the disbandment of the Future Forward Party (FFP) in February, and the abduction of exiled Thai activist Wanchalearm Satsaksit last month.

"I didn't pay attention to politics until the country became polarised in 2010. It raised issues about democracy," Pisitakun said.

"Back in February, I created a series of 100-200 stickers to take part in a FFP flash mob at Mahidol University. They were about different political and social topics like salaries of members of the House of Representatives and farmers facing poverty. I developed the ideas for this new project to document political news and situations in Thailand dating back to the failed uprising in 1912." 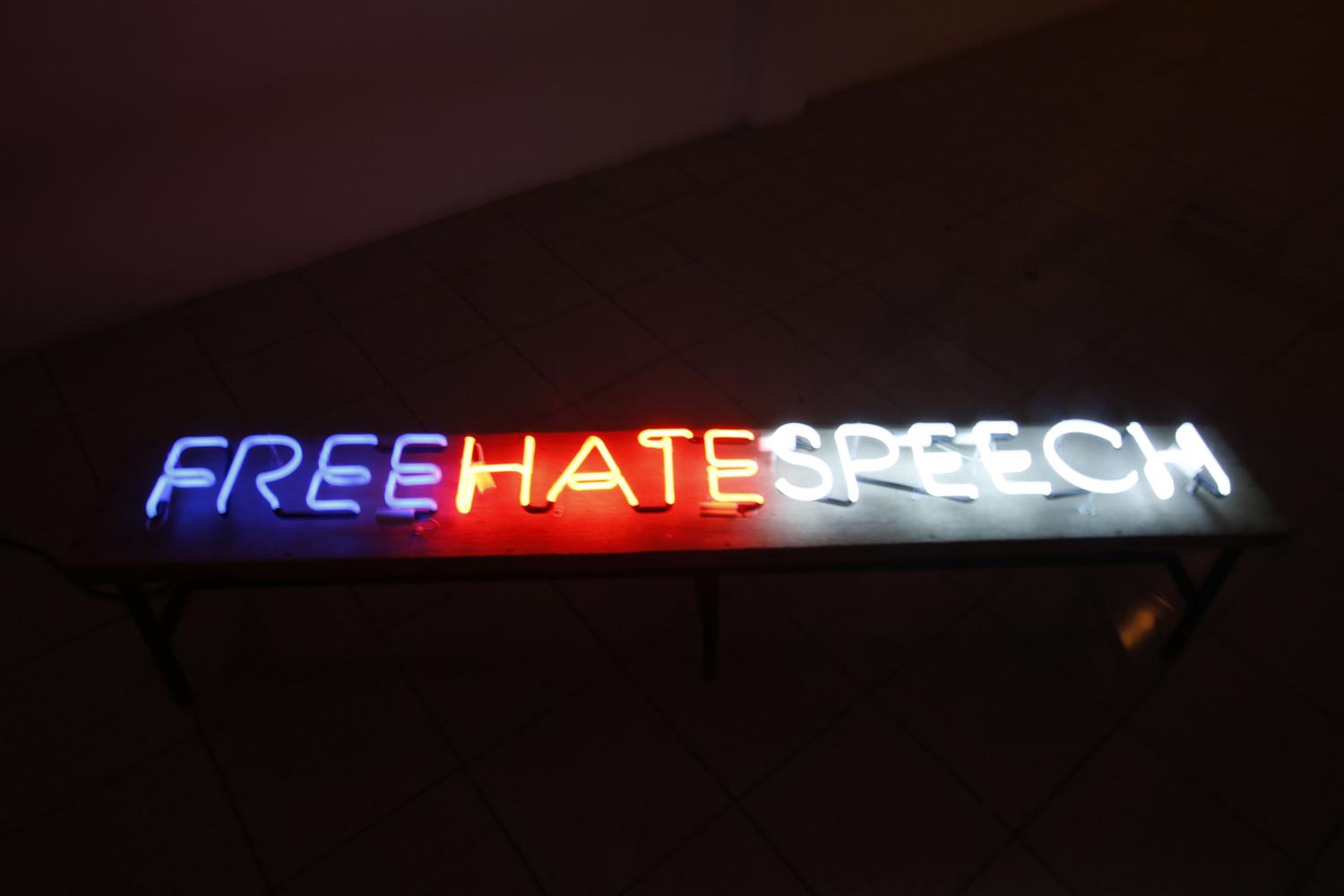 The 50 limited-edition box sets of 10 Year Thai Military Crackdown 2010-2020 are also on display. Each box is packed with an A6-sized collectable sticker book, A3-sized stickers and die-cut images with 20 A3-sized map posters showing locations both in Bangkok and other provinces where red-shirt protesters were shot and killed between May 13, 2010, and May 19, 2010.

Priced at 5,000 baht, 50% of proceeds will be donated to the Redfam Fund, which supports families of political prisoners in Ubon Ratchathani.

"Since 2017, I have searched for information about victims and travelled to various sites. Decorated with stickers of deities, cartoon characters and animals, each map features a list of victims and the cause of their death. Inspired by 3D animation from the 90s, I use different mediums and techniques to make the content light and friendly," he said.

Pisitakun pointed out that the political situation is getting worse as society is still driven by capitalists and hatred. However, he has hope for the new generation as they're eager to change and they should have the freedom to express their views without pressure. They are able to rapidly acknowledge information and learn to adapt to situations faster. 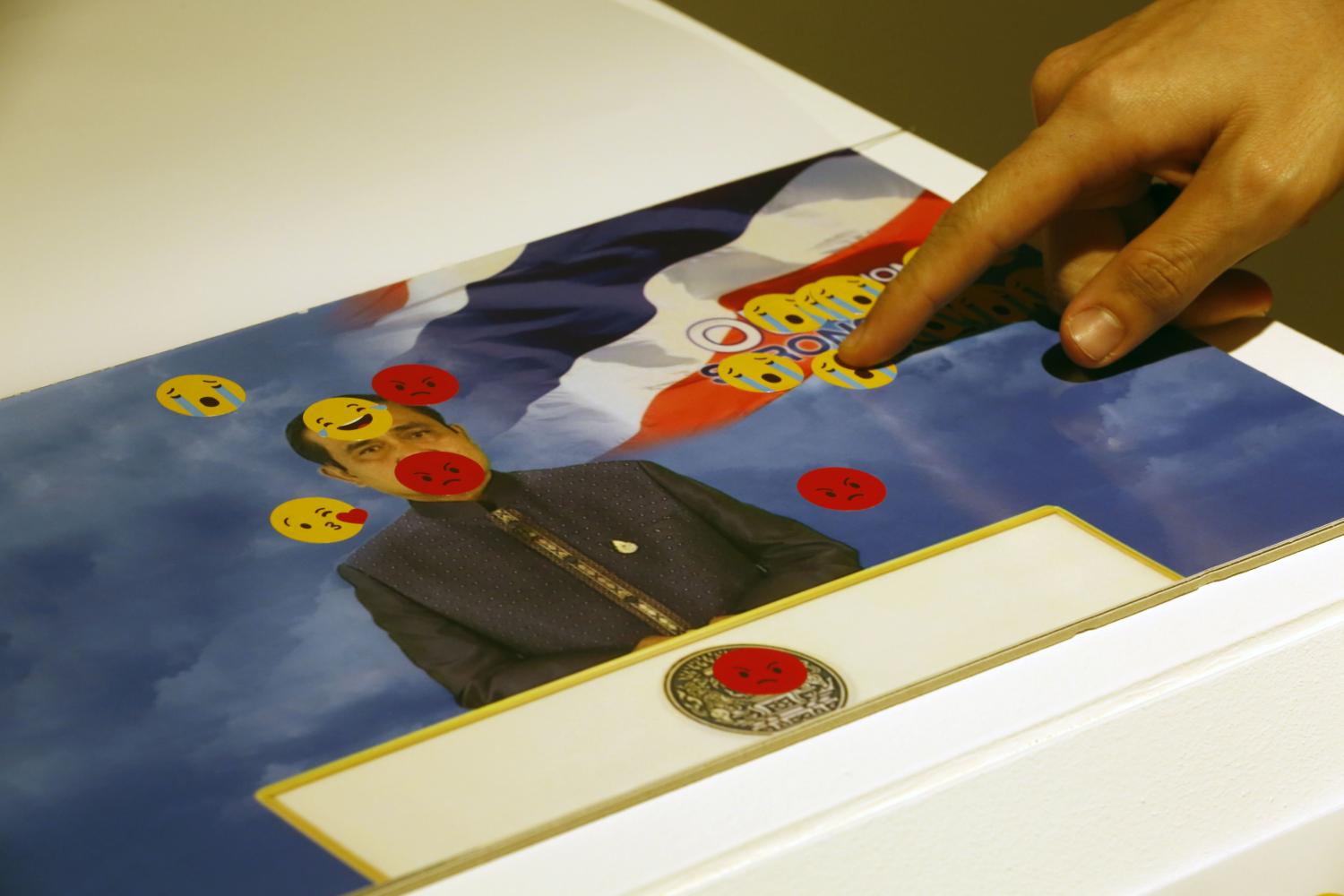 Another artist, Jakkapan, is showcasing a conceptual installation titled In The Tension, a sequel to Sitting In The Air/Balancing On The Rope. Using the principles of physics to calculate gravity and pressure, a white spirit house is enshrined on a ladder with a rope connecting the house to a gas tank to keep all objects balanced and stable. This work reflects the tension and inequality in Thai society.

"A spirit house represents a belief in Thai society, a gas tank symbolises tension, and a simple ladder serves as the foundation. This work is meant to provoke people to look at what is happening in society. Having different views doesn't mean you're right or wrong. Art is wide open and gives you the freedom of thought," Jakkapan said.

"Today, freedom and space to say the truth have become limited. There are several things involved in our lives but we have no room to talk about them. The situation is going to climax at some point. We have conflicts but that doesn't mean we need to kill each other."

On the 3rd floor, renowned photographer and filmmaker Manit introduces a new video-installation entitled Program Will Resume Shortly. The idea of this installation is to reflect that Thais still can't access some content despite Thailand's return to democracy. 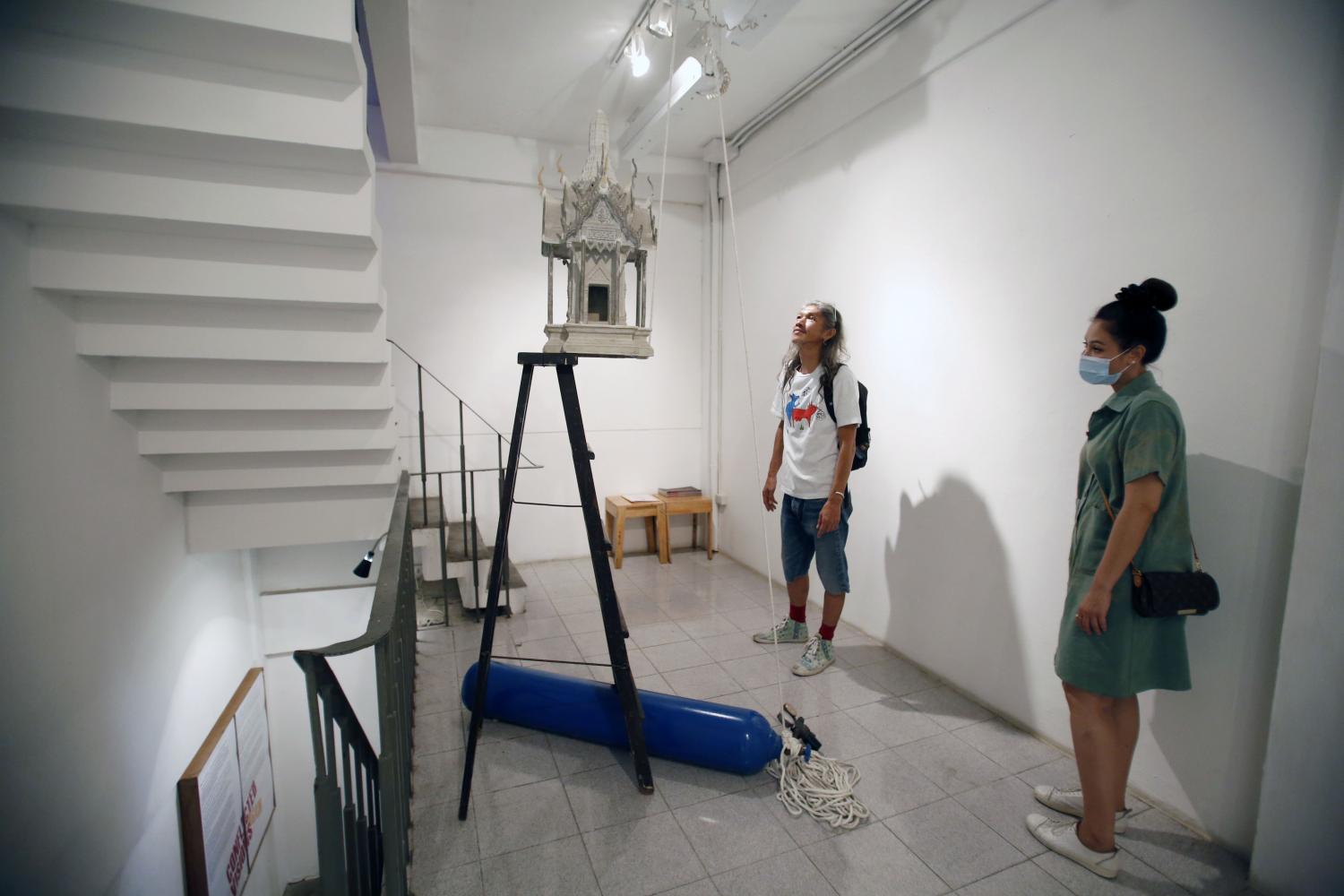 "This message [Program Will Resume Shortly] appeared on a TV screen while I watched the Al-Jazeera news channel on March 7. I questioned the logic behind censorship and guessed that the news might be related to the Thai monarchy," Manit said.

"Actually, Thais don't want to know the news but they want to know what foreigners think about Thailand. It's the basic rights we deserve. Thailand is in the globalisation era, so citizens should receive information and be able to make decisions as a democratic society."

Artist Sutee plays with the idea of free and hate speech through his installation entitled FREEHATESPEECH made from red, white and blue neon tubes -- the universal colour palette of many national flags. He got this inspiration from an argument on social media.

"People can't discern between free and hate speech. Some claim the right of free speech to bully others. Moreover, today news and information flows to us rapidly and we must make a quick judgement without consciousness. Actually, many countries face this problem, not only Thailand. I think hate speech leads to censorship. I want freedom but many people exercise the rights uncreatively," Sutee said.

Last but not least, Prakit presents an edition of Thailand's New Normal 1-6, these are wood installations that are shaped like soldiers, guns and skulls. They are painted gold and black with mottos like "Normal in abnormality", "Thailand must defeat" and "Do you want health or freedom?".

"A gun and soldier represent power and a skull is about death. I'd like to ask people if our lives are really normal? The medium the government uses is to exercise its power. For example, Dr Taweesin Visanuyothin asked us, 'Do you want health or freedom?'. He shouldn't do that because we deserve both health and freedom," Prakit said.

"The government should be investigated. We need to follow the 20-Year National Strategy? I'm not a pro-Thaksin artist but I believe in democracy. The coup d'etat can't help the situation return to normality. I just question as a citizen through artwork."

The "Conflicted Visions Again" exhibition is on display until Aug 23 at WTF Gallery & Cafe on Sukhumvit 51. It's open daily from Tuesday to Sunday from 6pm to midnight. To find out more details, call 02-662-6246 or visit wtfbangkok.com. 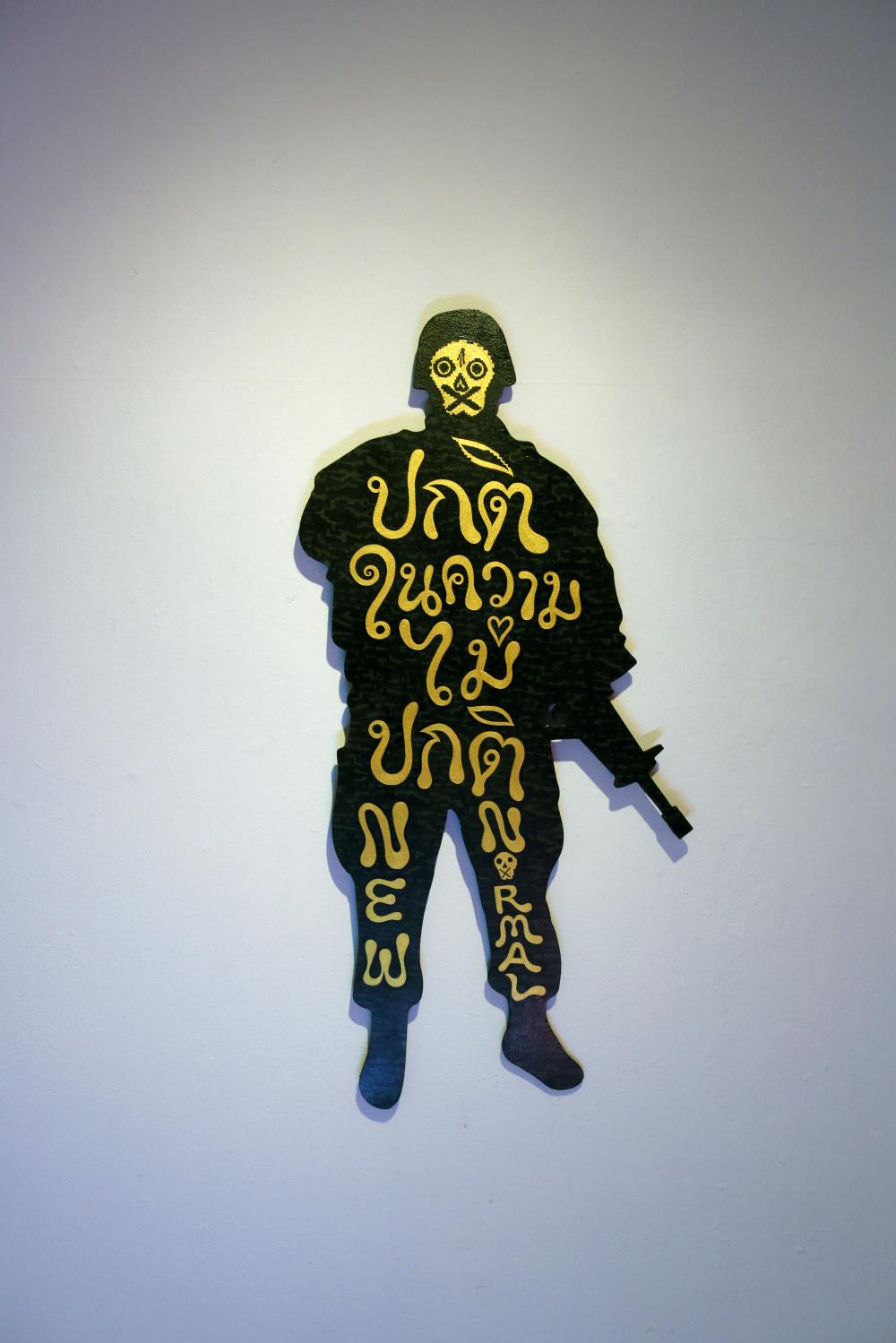