From here to eternity

Whenever artist Pachara Piyasongsoot goes to visit his girlfriend at her housing estate, he always sees the cleaning staff working tirelessly. After befriending one cleaning lady, he learned that some six families from Kalasin province live in a hidden 92m² space behind a tennis practice wall. Some of them have been there for as long as 20 years.

Since half of the residents at the housing estate don't pay maintenance fees, some facilities, such as the tennis court and basketball court, aren't in good condition. Likewise, the swimming pool can't be used. To make matters worse, the cleaners don't receive any welfare benefits. They earn only the minimum wage of 300 baht per day. They have a shared dream of building their own houses in Kalasin. But in order to earn enough money to do this, they have to work non-stop.

Pachara was inspired to convey their stories in 12 oil paintings for his collection, "Eternity Village". Now on view at Artist+Run Gallery, these beautiful images reflect the housing and living conditions of the lower classes in our unequal society. The paintings are based on photographs taken on the housing estate and in Kalasin, to which he has added his own interpretations of their stories and various objects. Curator of "Eternity Village" Angkrit Ajchariyasophon has praised Pachara's works as unique and exquisite. 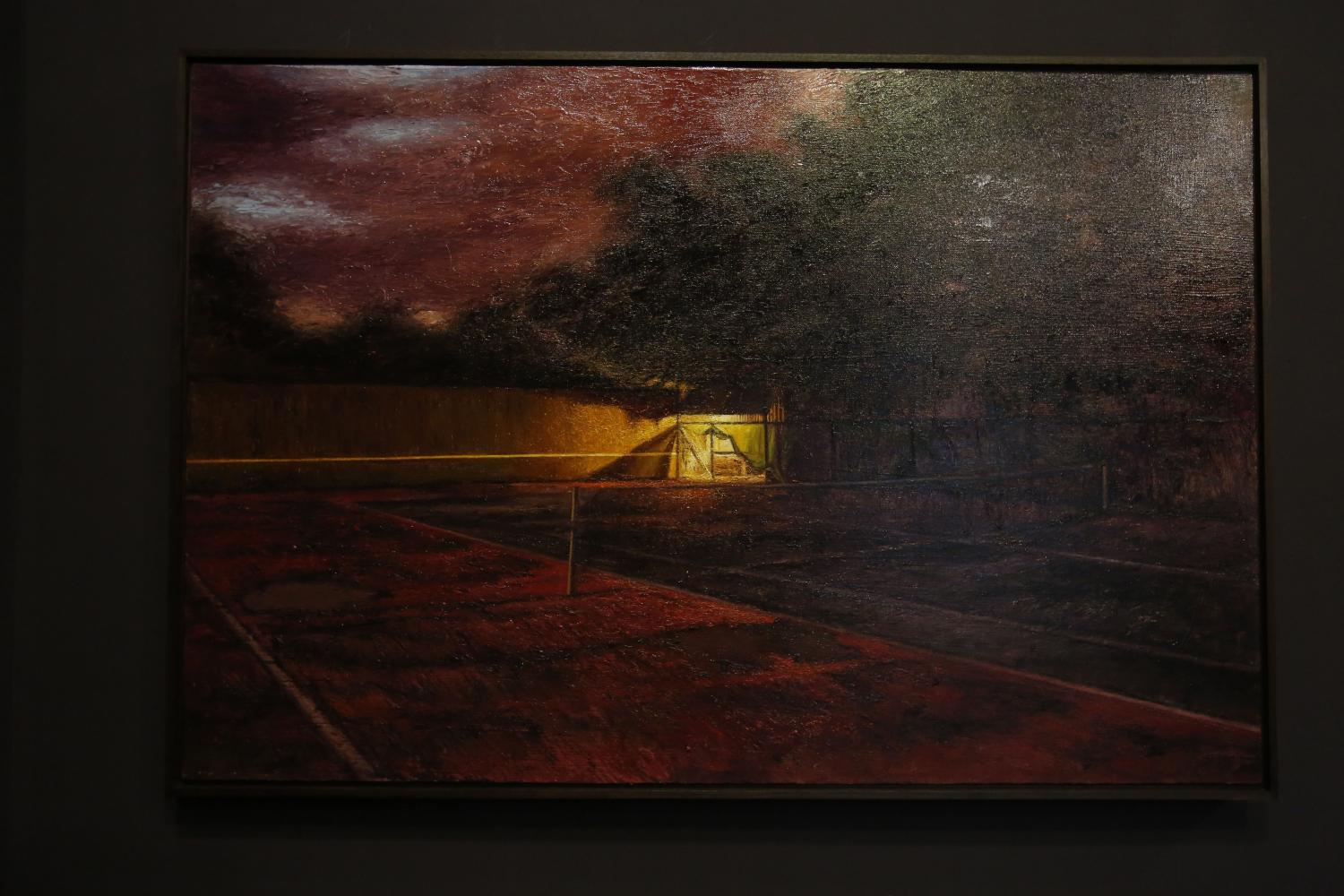 Lighthouse, a light in the darkness betrays the tiny space that six families call home.

"Pachara's artistic language is aesthetic. While many artists try to come up with art that has an easy appeal to audiences, Pachara's work needs to be slowly absorbed. It requires time and consideration to be properly understood. People might not get it straight away. This is rare, especially among younger artists. His style is classic and that's what I have been looking for," he said.

Since graduating from Silpakorn University in Painting, Sculpture and Graphic Arts, Pachara has held three solo exhibitions. His first, 2012's "Author From The Past", questioned his individuality and memories. Last year's "Anatomy Of Silence" looked at the structure of silence in Thai society via the political unrest of 1976, 2006 and 2010. In "Eternity Village", Pachara again tackles social issues.

Life spoke to Pachara about the stories behind his paintings and his thoughts on politics and society.

Politics is relevant to all of us. If we want to buy a car, we have to consider which bank to ask for a loan and who the bank executive is. Does this executive also run a housing estate? Everything connects. We have to look at the bigger picture.

What does 'Eternity Village' mean to you?

In religion, we are told that if we give our lives to God, we will be immortal. This can be interpreted to mean something else, for example, dreaming. If there were no sunlight that could mean you don't have to work, because farmers need sunlight and most labourers work in the daytime. I play around with this concept to create atmosphere and meaning. 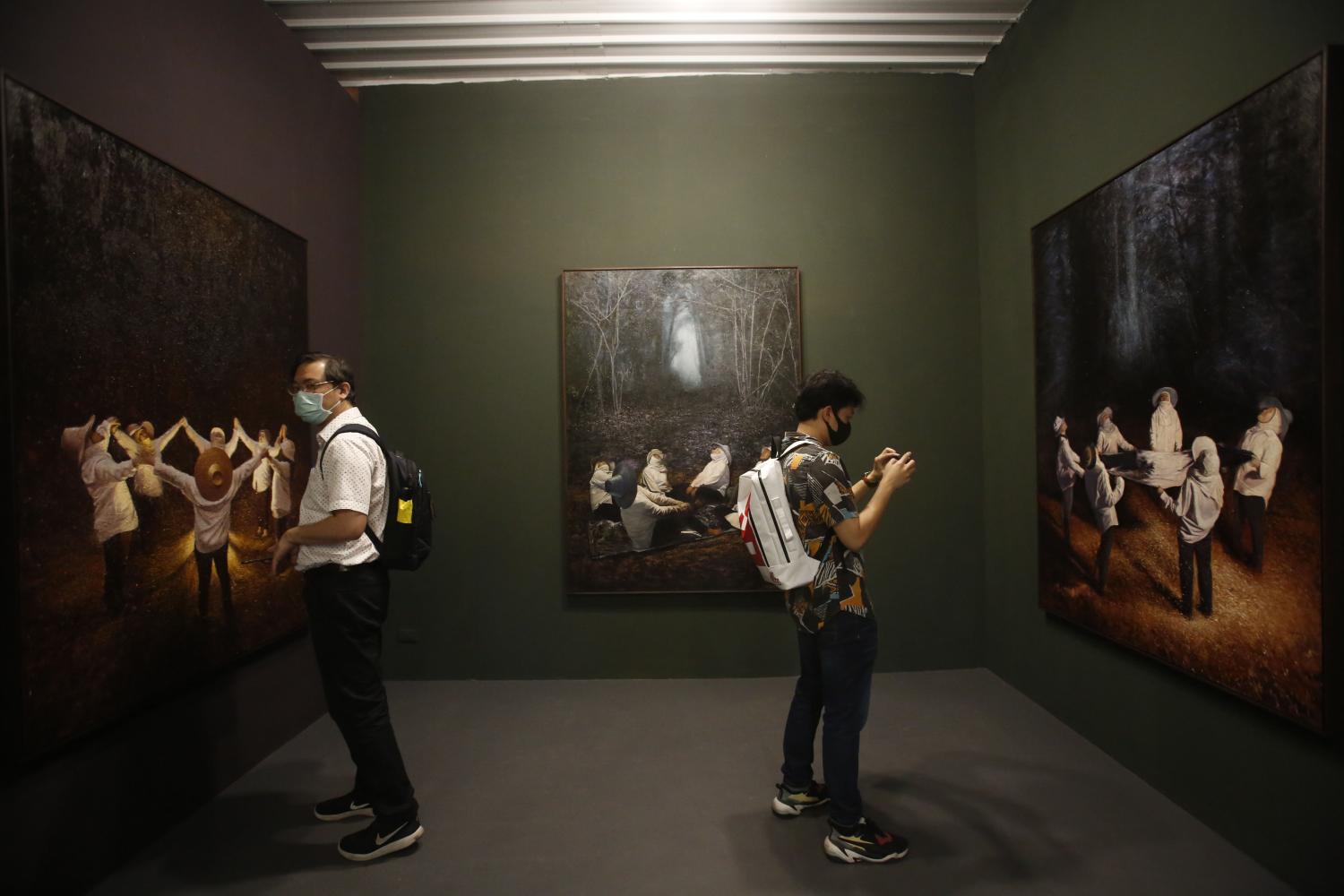 'The Nights Of Labour' series.

Why did you take an interest in the lives of the cleaning staff?

They represent something bigger. In this small housing estate, there are many problems. The cleaning staff earn low wages, and don't have other welfare benefits. They sweep up the leaves that keep falling on the ground. It is like they are collecting something that has died in order to continue living.

What is the message of this collection?

I want my paintings to be separate from me. Visitors don't have to have the same interpretations as me. They don't need to find any message in the paintings at all. They can come here to see only light and shade or trees and texture. One of the purposes of art is to raise questions in order to try and create something new. If an art becomes too repetitive, it is no longer an art but a craft.

Can you tell us about the living conditions of the cleaning staff on the housing estate?

They put everything they have in there, like five fans and two televisions. Poverty isn't status, it is a condition which people can't get away from. One of them told me that when her boyfriend drives her home to Kalasin, he has to memorise the directions because he can't read the road signs. I assumed that he hadn't studied beyond primary school, but he actually graduated from junior high. But the teachers in the province don't really teach. They spend their time playing cards. There are lots of things that poor people can't control or plan for. Their poverty doesn't mean they aren't hardworking. 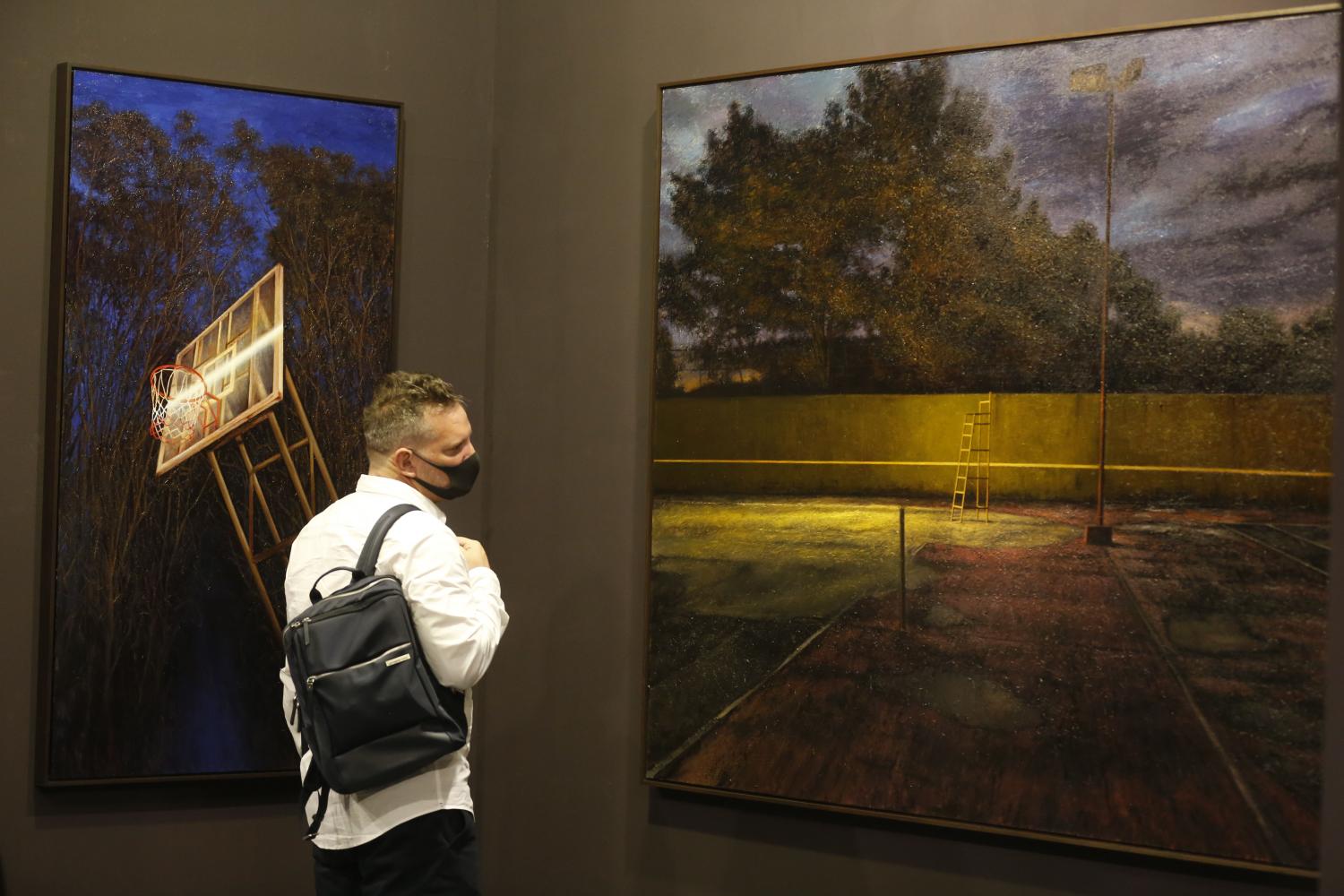 What was it like to do research in Kalasin?

Their houses in Kalasin have lots of space, but they don't have money to complete the building work. They also warned me that their areas in Kalasin are dangerous. They don't have security guards like housing estates in Bangkok. They had to hire people with arms to take care of us. When I went out to take photos, the cleaning staff pointed out a spot to me and told me a person had been burned to death on a rubber tyre there. When a student graduates from university, they are the hope of their entire family. The parents and elder family members expect the student to help take care of them when they are old. They often have to sell farmland or their belongings to support the student's education.

Do you think art has the power to change society and politics?

Art is an aesthetic subject. It doesn't relate to our lives directly. It is a specific field. I'm not sure that art can change society or politics, but it can make us question things around us and that can change our mindset.