One of Thailand's first transman realist painters, Weeraya "Jaiko" Yamansabeedeen has through the years successfully opened the debate on the meaning of world peace via some captivating artworks featuring the dilemma humans face in achieving an elusive peace.

Since graduating from Silpakorn University five years ago, the 28-year-old has produced contemporary art pieces intending to open a dialogue on the subject matter, which at times highlights how fickle-minded humans can be in the process of creating peace. He uses photography and his skills in realistic painting to create works depicting news events. His use of cartoon charters and symbolic pictures often softens the impact of the otherwise disturbing nature of some of the topics he addresses under the theme of peace.

"While humans say they desire peace, they go on to create war, creating enough violence in the process to maim and kill other humans. We need to rethink our strategy. I aspire to encourage society to follow the path of peace when it comes to us to make a choice. Violence can only beget violence and the same goes for peace," said the Bangkok-born artist.

Weeraya's work comes in series with the most current influenced by Leonardo da Vinci's iconic mural The Last Supper where he focuses on how faith plays an integral part during war and conflict. This much-anticipated work in progress will be completed at the end of the year, followed by an exhibition at 333Anywhere Contemporary art gallery. Weeraya's works can now be viewed via his Instagram.

"The painting I am working on at the moment which is part of The Last Supper series is Last Christmas. I desired to come up with a scene where a person who is going to war has his last meal with the people that mean most to him. People of the Christian faith can relate to it best because I have Jesus included among the people around the dinner table. Another aspect of the painting is the focus on family, the need for unity and warmth among its members. There is an element of sorrow embedded here over the fact that this could very well be their last meal with loved ones," the artist explained of his upcoming project.

Weeraya's perspective on world issues via his telling artwork has made him one of the promising fresh talents to come on the art scene from Silpakorn University, where he majored in visual arts, painting, sculpture and graphic design.

The desire to discuss peace via realism painting in part comes from his fascination with why wars continue to take place despite the hard lessons humans have had from previous experiences. To collect ideas to go with this theme, he gathers information from various sources. Being curious has played a pivotal part in this process, he said. 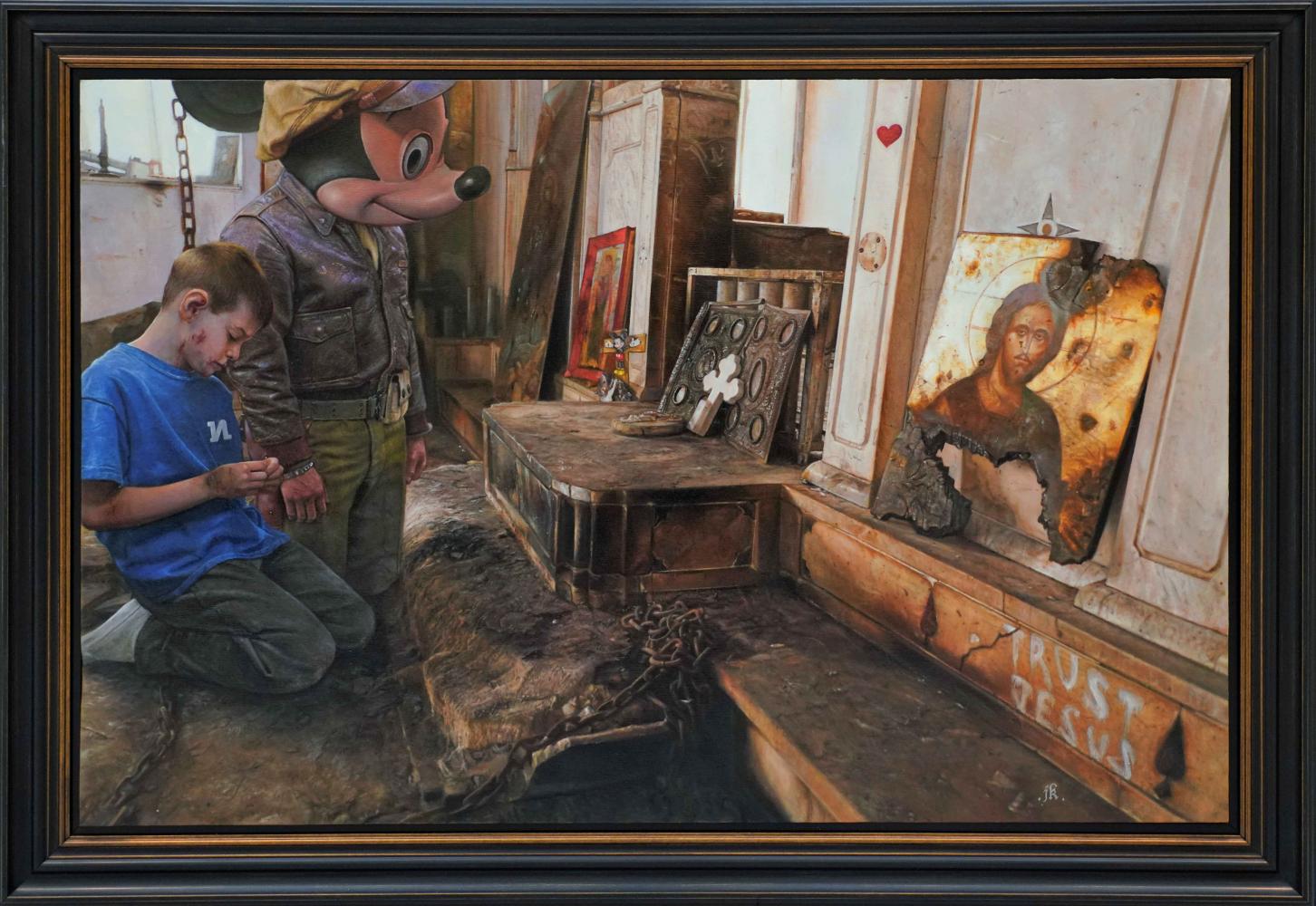 Since launching his work on Instagram as a budding artist, he has had his work showcased in art galleries around Bangkok. His clientele -- many of whom are avid fans -- are only too happy for him to pick the concept for them.

"My clients are fans of my work, so they might request for me to add their family pet into the art piece I make for them, however, the concept they leave to me. In the first few years after graduating, I used to be open for made-to-order assignments, but as I matured as an artist, I felt the need to reserve the outcome of the assignment to my discretion."

In terms of sexuality, of course, his struggles with becoming a transman has greatly attributed to his drive to achieve success as an artist.

From a middle-class Muslim family in Bangkok, Weeraya is like many transmen and transwomen today who have gone through a tumultuous life journey before receiving acceptance from both their family and society.

Despite the bullying and unacceptance that he faced growing up, there was always a determination in him to prove his worth to society and reach acceptance from loved ones by working hard and persevering.

To better understand Weeraya's mindset, one has to go back to his childhood.

The older of two children, he hails from a family of academics. Like a number of trans people, the cool-and-collected artist was never comfortable with the gender he was assigned at birth.

While his family felt that he would eventually grow out of his tomboyish ways, Weeraya came out as a "tom" in junior high school and realised the need to transition fully after graduating from university.

It was Weeraya's passion for painting that sustained him emotionally during some of the most traumatic moments in his life. This included not being able to be the daughter his family desired coupled with the harsh taunts he experienced from neighbourhood bullies that left him physically and emotionally bruised.

Some of the most hurtful comments came from his family, one he vividly recalls was "you have become the laughing stock of our community" and "how can you become successful if you continue to behave in this manner".

Today he doesn't hold his family responsible for the harsh words that were exchanged at that point in his life, opting rather to forgive and empathise with them.

"Parents and family members go through a grieving period in such instances because their desires and expectations are dashed when they have a trans child. The society we live in also questions their parenthood. It is a lot to cope with."

Amid the chaos of coming to terms with him being trans, Weeraya found the inner strength to focus on becoming the best in what he envisioned himself to be as a child, and that was to become an artist.

"Growing up trans was anything but smooth. The biggest struggle was acceptance and the fear my family had for my future. They were concerned who would look after me once they passed away. For them being a trans in Thai society was like being the butt of everyone's joke.

"This entire experience made me all the more determined to prove society and my family wrong by doing all I could to reach success, first in the area of academia and then my career choice."

The determination and hard work Weeraya put into making a success of himself have today paid off handsomely.

"Seeing the success I have had as an artist has made my parents truly proud of me today. My father even accepts me to the point that he says that I am his son!"

For video of this story, visit bangkokpost.com/vdo.