published : 15 Sep 2020 at 13:45
writer: AFP
In Nakhon Pathom, about an hour east from downtown Bangkok, the dragon tower inside Sam Phran temple came from the dreams of its former abbot.

CHON BURI: A dragon encircles a tower, wretched souls face torture, superheroes scale a mosaic wall -- these may seem like scenes from a half-remembered dream, but are in fact famed Thai temples.

The Buddhist-majority kingdom has its share of solemn worship houses and pagodas, but there are also its quirkier counterparts which double as tourist attractions.

In Nakhon Pathom, about an hour east from downtown Bangkok, the dragon tower inside Sam Phran temple came from the dreams of its former abbot.

The 16-storey jewel-pink tower, with a dragon slithering up it, symbolises the 16 levels of heaven in Buddhism mythology.

Its hellish counterpart is Saen Suk temple in Chon Buri province, where graphic tableaus of punishment and torture have been erected in a garden -- like an open-air dungeon for visitors to stroll through.

Statues of eagles rip out the intestines of wrongdoers, liars get their tongues cut off, and men who engage in pre-marital sex get their genitals stabbed with a spear.

"If you choose to live an unrighteous life, you'll end up like these statues," says visitor Suchart Klaoteaw, 21, as he passes other families snapping selfies with their children.

"We just need to be conscious about everything we do... because karma is real." 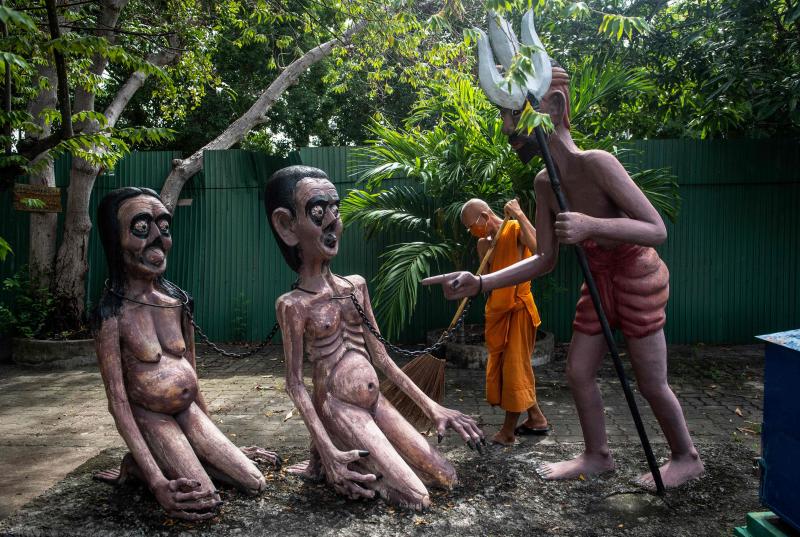 This file photo taken on July 9, 2020 shows a Buddhist monk sweeping around statues illustrating the fate of people who do bad deeds in a garden depicting a Buddhist version of hell at the Wat Saeng Suk temple in the Thai coastal province of Chon Buri. (AFP)

A more light-hearted take on Buddhism will be found at Bangkok's Priwat Ratchasongkhram temple, where worshippers can see Batman scaling a temple door and Winnie the Pooh trying to remove a beehive from a wall painting.

Carrying the base of the Buddha is a David Beckham statue wearing his Manchester United jersey -- a testament to the kingdom's football-crazy fans.

"I really love it... we get to see characters we've never seen before at this temple," she tells AFP. 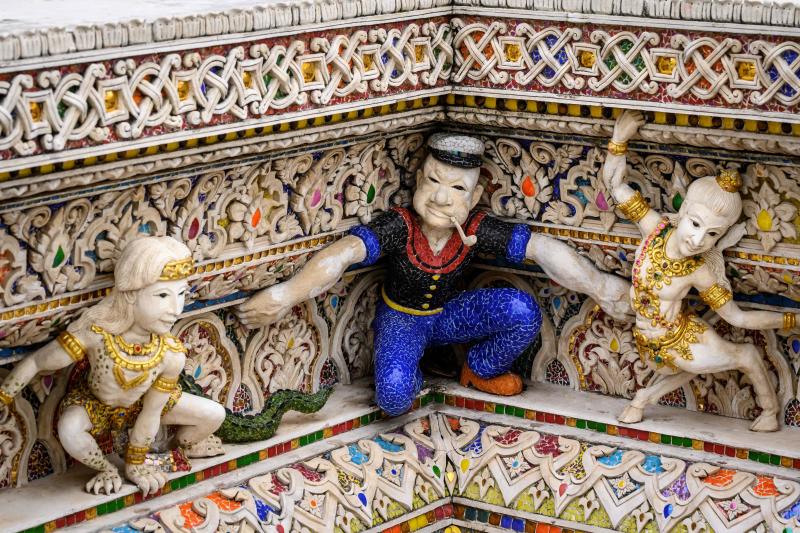 his file photo taken on July 14, 2020 shows a figure of the cartoon character Popeye among imaginary creatures on the facade of the Wat Pariwat Buddhist temple in Bangkok. (AFP)