Heroes to the rescue

Having read and seen news about inequality in Thailand as a child, Tewaporn Maikongkeaw began to slowly develop an interest in social issues.

Over time, as his interest became more focused, the artist decided to create an oil painting series titled "Dream Hero", comprising of artworks such as Su Rop Top Mue, or Fight, in which Japanese hero Kamen Rider shows up to protect Thais from social inequality amid a civil war.

"The more the country has developed, the more the gap between the rich and the poor has increased, making it harder to solve the problem of inequality. I'm now 40-something and inequality still remains an issue in Thai society. In this collection, I wanted to create easy to understand paintings and tell stories through mural art techniques. I developed my mural art from works created by villagers whose works reflect inequality from their own experiences. We can see lower-, middle- and upper-class people in their paintings. Also, inequality isn't only a problem between the rich and poor because people belonging to the same class can also face this issue," explained Tewaporn.

Inequality exists nationwide, but since there is no way out, Tewaporn dreams to have heroes save the Kingdom.

"I'm an ordinary person. I can't fight with powerful people, so I imagine having heroes to help us. In 'Dream Hero', there is Kamen Rider, Gundam and Superman, who were all my childhood heroes. Other figures such as Ben10 are not included in this squad because I didn't grow up with them," said Tewaporn. 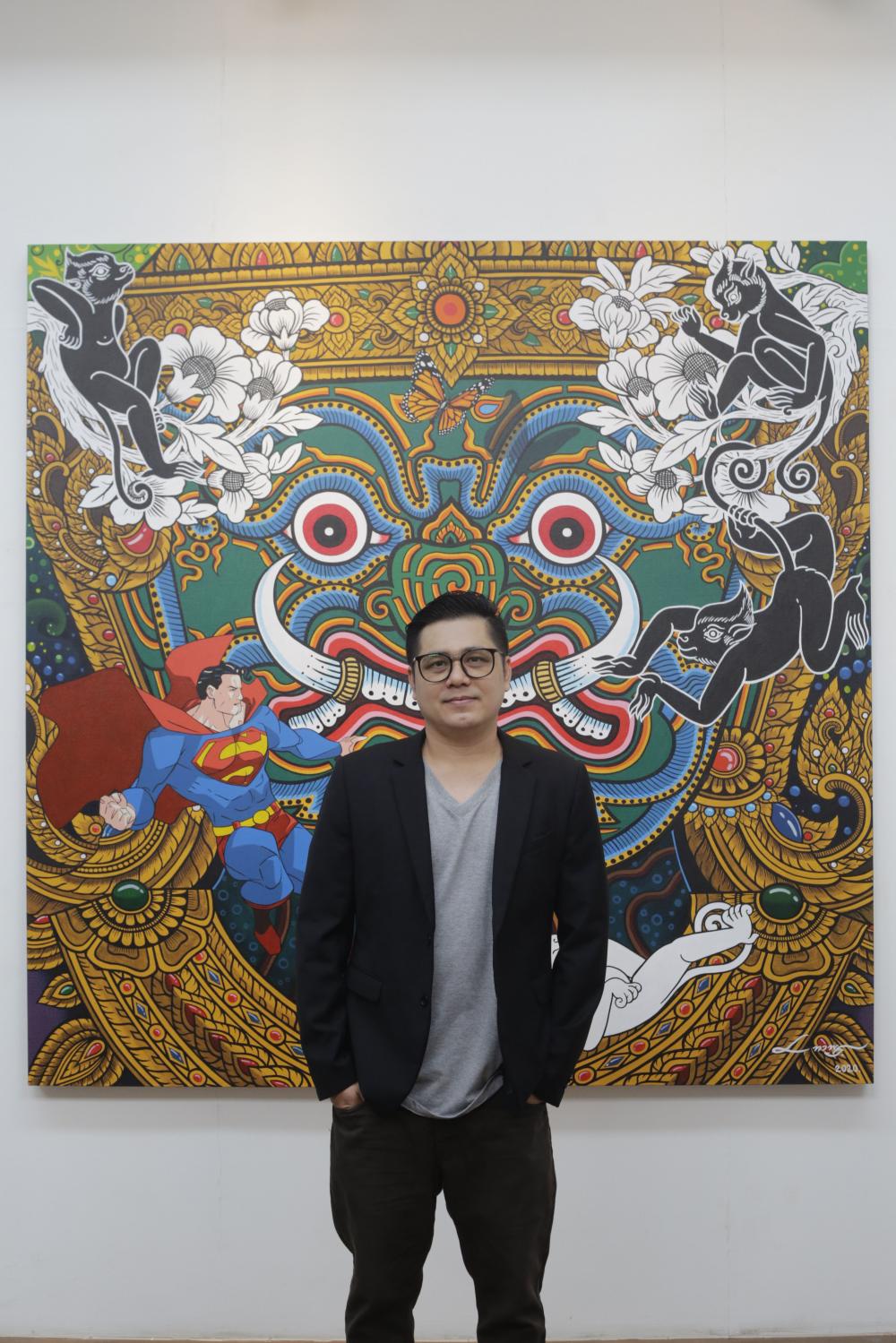 Tewaporn's interest in painting began at a very young age when his father bought him coloured pencils. After that, he began to paint many different things. His talent was first noticed when he received a prize for a painting in primary school. He then further developed his skills by attending several art schools until he finally received his Master's degree from the Faculty of Painting, Sculpture and Graphic Arts, Silpakorn University. Tewaporn said renowned artist Natee Utarit is his idol and has influenced the way he works.

"Natee was my adviser when I was a university student and I liked his artwork immensely. His artwork is always of high quality and has changed over time. While some artists use repeated patterns with their artworks until people are able to immediately recognise who created the work, I think artists should not follow the same pattern. If anyone sees my works, they will notice that I don't use the same patterns," said Tewaporn.

Although Tewaporn comes up with different patterns, his works always tackle social issues. In 2017, his exhibition "Around" reflected on the influence of social media on our society and "Lose" in 2015 depicted empathy for families who lost loved ones in attacks due to the insurgency in the Deep South.

"My works are inspired by social issues that I am interested in that affect many people. Unlike my previous works, 'Dream Hero' was purposely created to be easy to understand," said Tewaporn.

In Thailand, singer Artiwara "Toon" Kongmalai and former actor Bin Bunluerit are recognised as our heroes. Toon ran throughout the Kingdom to raise money for hospitals and Bin helped people who were affected by floods and Covid-19. However, they can't save everyone in the country. 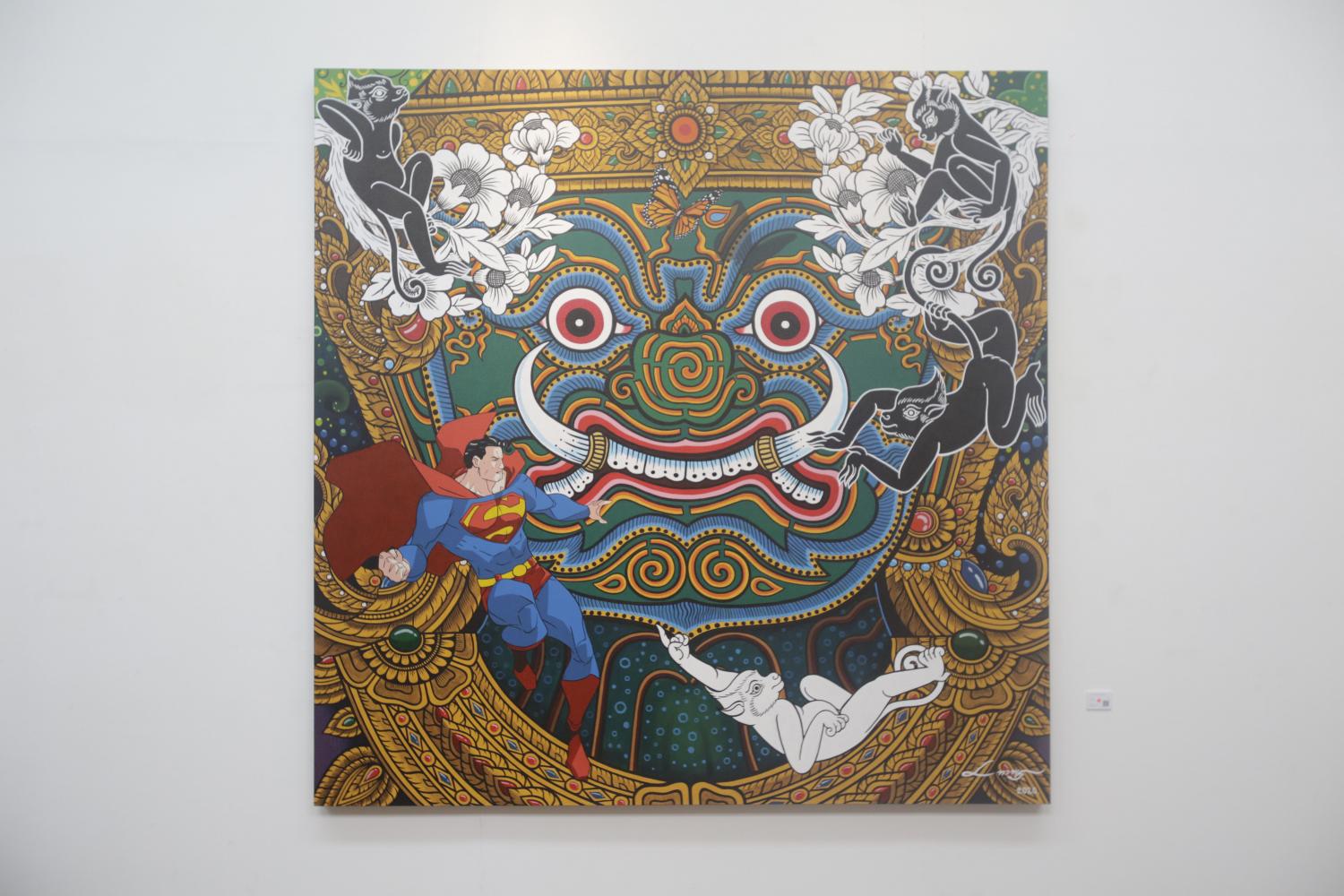 "They are our heroes but if compared to issues that Thai people encounter, two is a small number. If we have more heroes, more problems can be solved," said Tewaporn.

Among the nine oil paintings, Fight and Superman stand out because they portray Tewaporn's childhood heroes.

"In the background of Fight, we can see people from different classes. The painting depicts a civil war in which Thai people fight against each other and Kamen Rider comes to save everyone. In Superman, a Yak [a giant/villain] from a Thai mural is used as the background. The Yak represents powerful people who are the leaders behind other villains while black monkeys represent his hired gangsters. The black monkeys invade a tree belonging to a white monkey who represents good people. Then, Superman arrives to bring justice," explained Tewaporn.

Zombie is a painting without any superhero character but it still contains strong messages. In it, Tewaporn depicts a zombie in green with monks in the background.

"This painting implies some political issues. A zombie in a military suit will suck flesh and blood or take advantage of the country. I added monks in the background to remind the military of the law of karma," Tewaporn explained.

"Dream Hero" has received a great response from both collectors and visitors and many pieces from the collection have already been sold. Tewaporn doesn't expect that his work will change inequality totally but he hopes there will be some minor shifts.

"I hope my work can raise awareness so that people know we should not take advantage of others and live together peacefully. If everyone can do this, our society will be fine, as if we have superheroes to help us," said Tewaporn.

After taking on serious issues for many years, Tewaporn also wants to create artworks that are more fun.

"I follow the news, so my works deal with serious issues, but I want to do something fun too. I still have to figure out how to compose and present my work to be enjoyable. I tried to do that before, but it hasn't worked yet. I don't want to limit my work to only serious issues. I want to create artworks that develop and change with the course of time. If next year is a good year for our country, I'll do something about happiness," said Tewaporn. 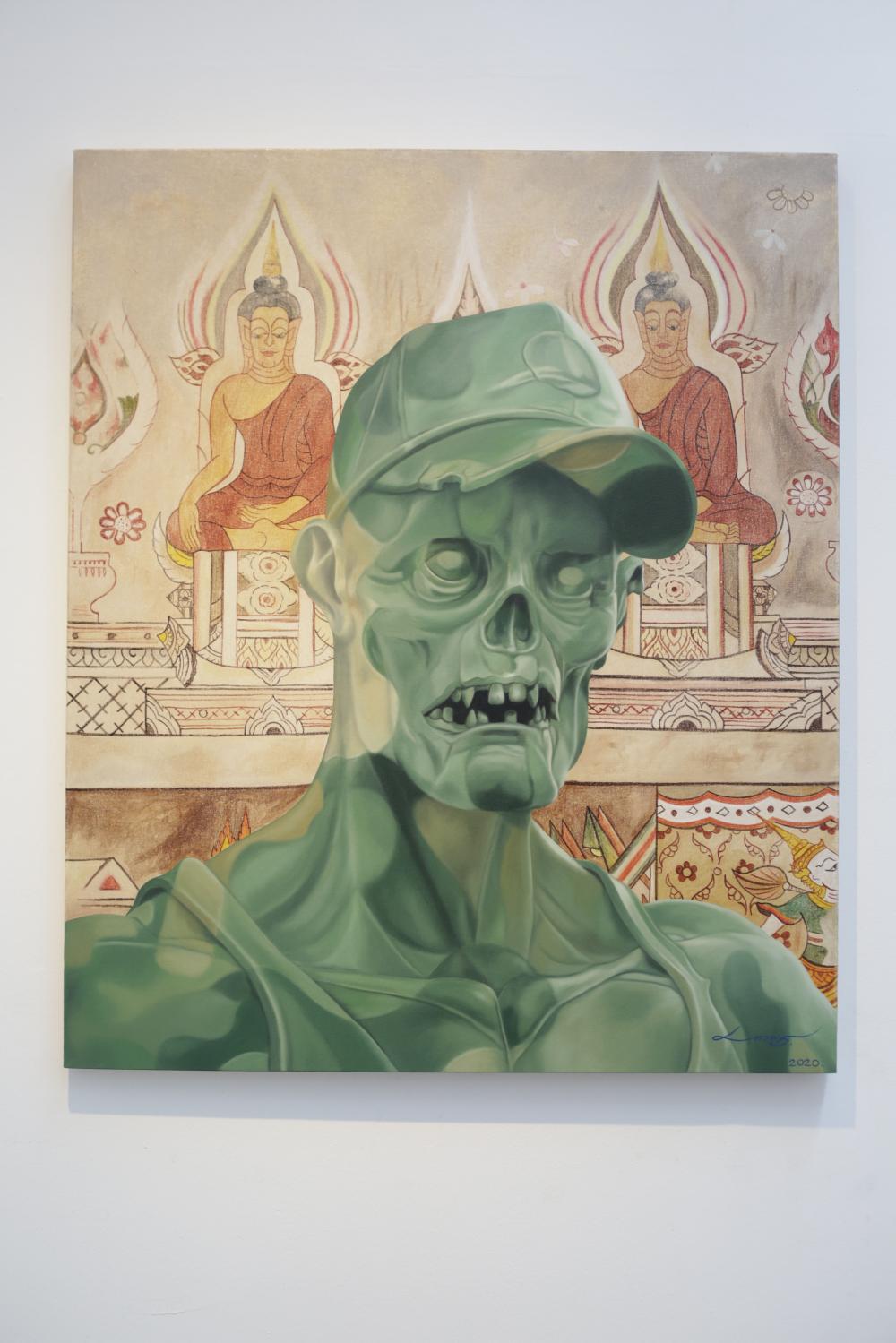 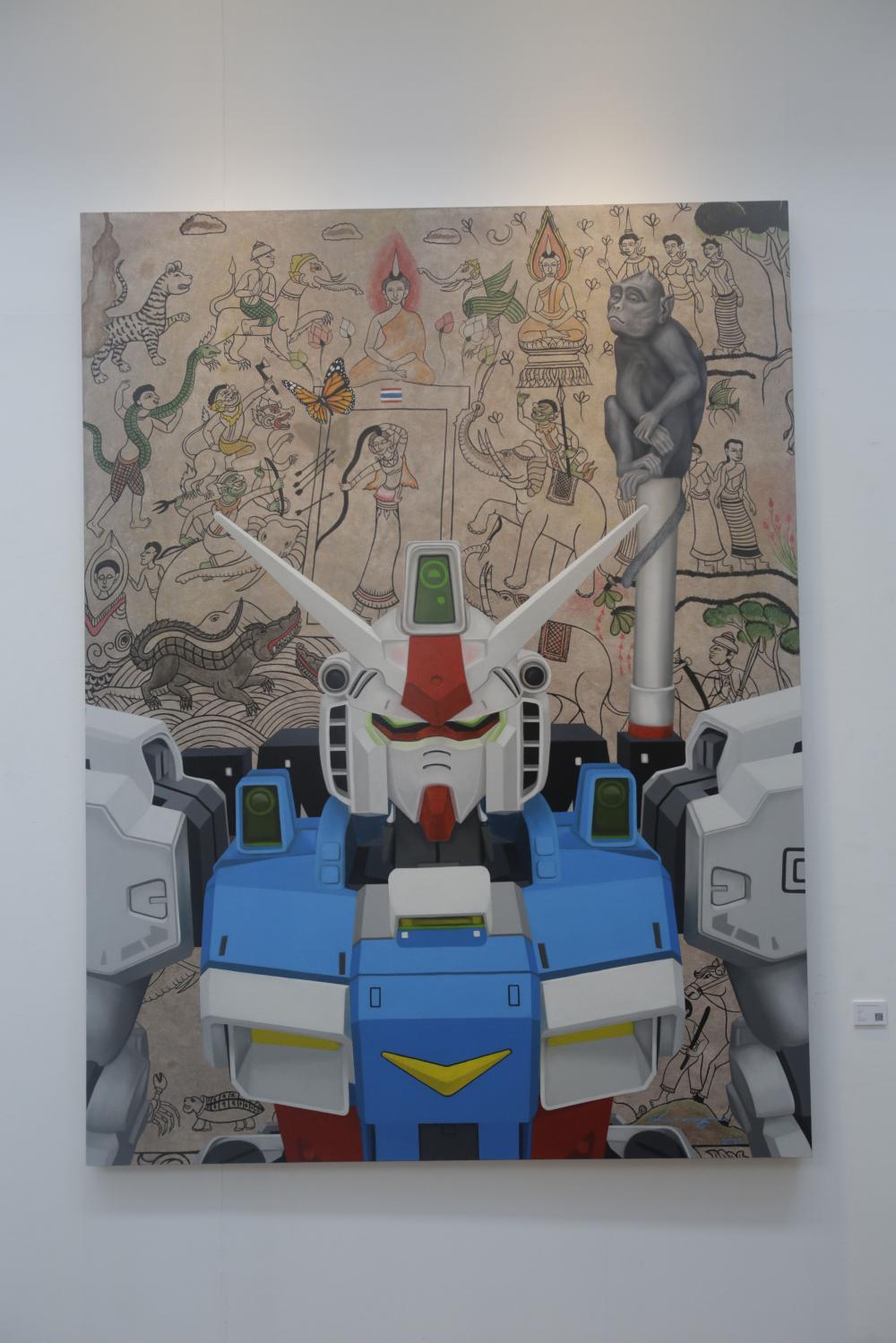 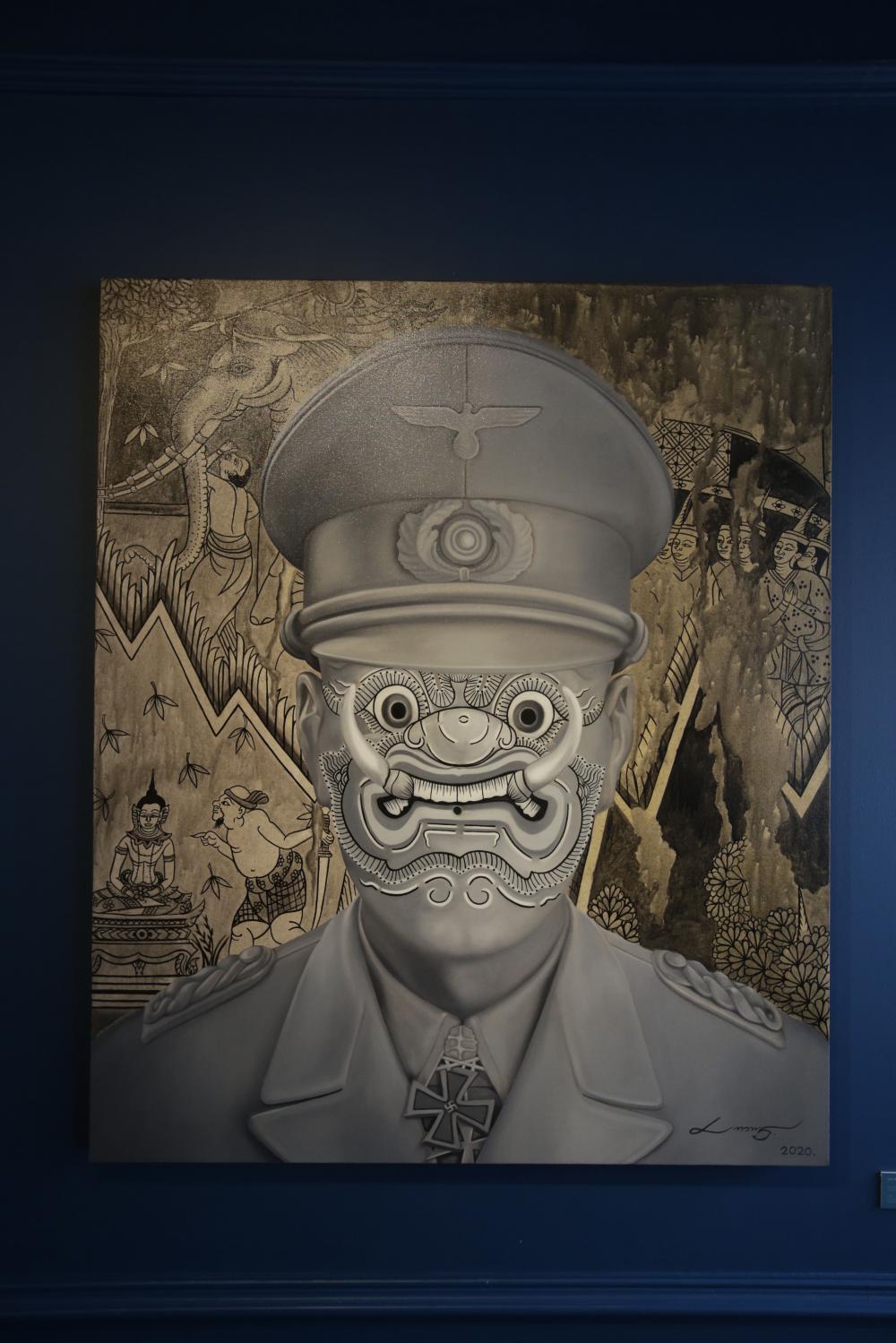