Drenched with desire, Wong Kar-wai's In The Mood For Love feels like a plush, vivid dream lodged in the deepest recess of a lover's heart. Now, the heart is beating again and the dream is being projected on the big screen some 20 years after the film first stunned audiences at Cannes and launched a wave of copycats around Asia.

For the first time in Bangkok, In The Mood For Love is having a theatrical release at the House Samyan -- along with four other films by Wong that will roll out over the next month -- and it has been digitally restored to 4K quality. In case you need a reason to go back to the cinema, this is hands-down it.

In The Mood For Love was a sensation when it first came out in 2000, making Wong a modern master who helped elevate the status of Asian cinema to its peak. While Christopher Doyle's sensuous cinematography -- the way the coil of cigarette smoke or the hem of a cheongsam turns into a relic of lost romance -- became the definition of cinematic beauty in the years that followed, back in 1994, Wong's Chungking Express was one of the hippest movies in the world and even Quentin Tarantino said that he cried his eyes out because the film reminded him of why he loved movies so much. Well, we tend to be less excitable than Quentin in general but we understand his gushing. In 1997, Wong's Happy Together, about two lovers from Hong Kong who drift apart during a trip to Argentina, roused critics with its loose cadence and sun-dripped desolation.

Today, In The Mood For Love is remembered mainly because it is a beautiful and heartbreaking tale. The movie gives you a high, a visual and sentimental vertigo achieved by the near-perfect chemistry of texture, rhythm, colour, movement and sound. The melancholic desire between Chan and Chow (Maggie Cheung and Tony Leung), who are neighbours in Hong Kong in 1962 and whose respective spouses are having an affair with each other, sets up a simple romantic story. It may seem old-fashioned today -- even cloying -- in a world of topical movies and discourse-loving cinema-goers but after 20 years, what Wong's film holds defiantly is what time cannot wear off. The film wears its bleeding heart on its starched, impeccable sleeves and openly lures us into its swirl of emotions that does not let us go. 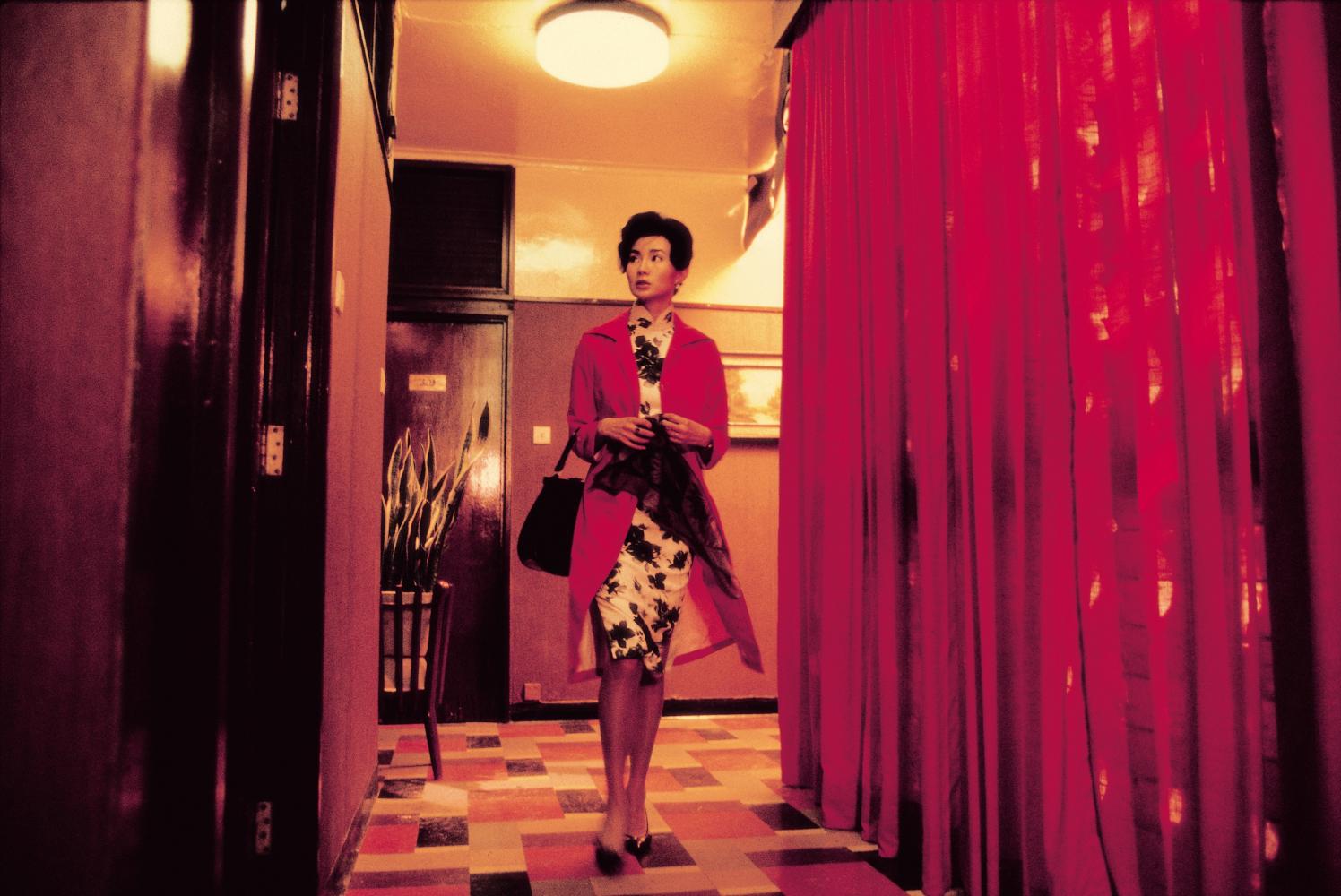 In The Mood For Love.

The film accomplishes all this with a language crafted by Wong and Doyle, the languor of the camera, the elegant slow-motion shot, a persistent Nat King Cole song, the glide of fabric, a sensational colour palette, and an understated intimacy between the two leads. What you see and what you don't is very important here. As Chan and Chow shuttle between the cramped hallway of their apartment building, we get a glimpse of their respective spouses -- from behind partially or faceless and obscured by the furniture to hint that they are excluded from the small world of these two disappointed lovers driven towards each other by the absence of what they think is theirs. We see a wall clock repeatedly but we only know the passage of time -- days, weeks, months -- by the different colours of Chan's stiff-collared cheongsam, a majestic wardrobe unequalled by even the most fashion-conscious American film.

In his other films -- notably Chungking Express -- Wong captures the speed and sound of Hong Kong, a vast city full of people looking for something they know they will never find. Yet, In The Mood For Love, the rhythm is more waltz than jazz. In fact, it's tango, which is the dance of perpetual flirtation and the rhythmic bustle of modern Hong Kong is replaced by a period dream. Wong and Doyle shot a number of scenes in Bangkok around Charoen Krung Road, including many emotional encounters between Chow and Chan. This construction of a particular space and time gives the film -- which takes place in Hong Kong in 1962 as well as in Singapore a little later -- a dreamlike quality as the lovers carve out their stolen moments from a reality to which they feel don't belong to.

It's easy (and dumb) to call Wong a filmmaker who favours "style over substance" since that makes no sense. Wong (and Doyle) are stylists and that broad label sticks, however, his films are not based on "style" but rather constructed out of a "form" that is completely different from style (or from "fashion", which exhausts itself very quickly as can be witnessed in Wong's copycats). In The Mood For Love wouldn't have looked so good after 20 years had it been a stylistic exercise. At the same time, Wong's vision of Hong Kong in 1962 -- a time when politeness and endless mahjong sessions shaped people's lives -- carries a strange political aftertaste given the image of Hong Kong in 2020 is all about uncertainty and discontent. Wong's nostalgia, once bittersweet, now brings something akin to pain.

In The Mood For Love is showing at House Samyan and select branches of Major Cineplex and SF Cinema. In the following weeks, four other films by Wong Kar-wai will roll out, including Happy Together, 2046, Fallen Angel and Chungking Express.