Connery was raised in near poverty in the slums of Edinburgh and worked as a coffin polisher, milkman and lifeguard before his bodybuilding hobby helped launch an acting career that made him one of the world’s biggest stars.

He will be remembered first as British agent 007, the character created by the novelist Ian Fleming and immortalised by Connery in films starting with Dr. No in 1962.

As Bond, his debonair manner and wry humour in foiling flamboyant villains and cavorting with beautiful women belied a darker, violent edge, and he crafted a depth of character that set the standard for those who followed him in the role.

He would introduce himself in the movies with the signature line, “Bond — James Bond.” But Connery was unhappy being defined by the role and once said he “hated that damned James Bond”.

Tall and handsome, with a throaty voice to match a sometimes crusty personality, Connery played a series of noteworthy roles besides Bond and won an Academy Award for best supporting actor his portrayal of a tough Chicago cop opposite Kevin Costner in Brian De Palma’s The Untouchables (1987).

He was 59 when People magazine declared him the “Sexiest Man Alive” in 1989.

Connery was an ardent supporter of Scottish independence and had the words “Scotland Forever” tattooed on his arm while serving in the Royal Navy. When he was knighted at the age of 69 by Queen Elizabeth in 2000 at Holyrood Palace in Edinburgh, he wore full Scottish dress including the green-and-black plaid kilt of his mother’s MacLeod clan.

Some noteworthy non-Bond films included director Alfred Hitchcock’s Marnie (1964), The Wind and the Lion (1975) with Candice Bergen, director John Huston’s The Man Who Would be King (1975) with Michael Caine, director Steven Spielberg’s Indiana Jones and the Last Crusade (1989) and the Cold War tale The Hunt for Red October (1990).

Fans of alternative cinema will always remember him starring as the “Brutal Exterminator” Zed in John Boorman’s mind-bending fantasy epic Zardoz (1974), where a heavily moustachioed Connery spent much of the movie running around in a skimpy red loincloth, thigh-high leather boots and a pony tail.

A late-career favourite of audiences was Finding Forrester, a 2000 American drama directed by Gus Van Sant, in which Connery plays a reclusive writer who mentors a black teenager in New York.

Connery retired from movies after disputes with the director of his final outing, the forgettable The League of Extraordinary Gentlemen in 2003.

“I get fed up dealing with idiots,” he said.

Connery then grew concerned about being typecast and decided to break away. The Australian actor George Lazenby succeeded him as Bond in On Her Majesty’s Secret Service in 1969.

But without Connery it lacked what the public wanted and he was lured back in 1971 for Diamonds Are Forever with temptations that included a slice of the profits, which he said would go to a Scottish educational trust. He insisted it would be his last time as Bond.

Twelve years later, at age 53, Connery was back as 007 in Never Say Never Again (1983), an independent production that enraged his old mentor, producer Albert “Cubby” Broccoli.

In a 1983 interview, Connery summed up the ideal Bond film as having “marvellous locations, interesting ambiance, good stories, interesting characters — like a detective story with espionage and exotic settings and nice birds.”

Connery was a very different type from Fleming’s Bond character with his impeccable social background, preferring beer to Bond’s vodka martini cocktails that were “shaken not stirred”.

But Connery’s influence helped shape the character in the books as well as the films. He never attempted to disguise his Scottish accent, leading Fleming to give Bond a Scottish heritage in the books that were released after Connery’s debut.

Born Thomas Sean Connery of Irish ancestry in the slums of Edinburgh on Aug 25, 1930, he was the elder of two sons of a long-distance truck driver and a mother who worked as a cleaner. He dropped out of school at age 13 and worked in a variety of menial jobs. At 16, two years after World War II ended, Connery was drafted into the Royal Navy, and served three years.

“I grew up with no notion of a career, much less acting,” he once said. “I certainly never have plotted it out. It was all happenstance, really.”

It was his part in a 1959 Disney leprechaun movie, Darby O’Gill and the Little People, that helped land the role of Bond. Broccoli, a producer of the Bond films, asked his wife to watch Connery in the Disney movie while he was searching for the right leading actor.

Dana Broccoli said her husband told her he was not sure Connery had sex appeal.

“I saw that face and the way he moved and talked and I said: ‘Cubby, he’s fabulous!’” she said. “He was just perfect, he had star material right there.”

Connery published his autobiography, Being a Scot, co-written with Murray Grigor, in 2008. Besides his knighthood and his Academy Award, he received many kudos over his long career, including the Kennedy Center Honors in the US in 1999 and the American Film Institute’s lifetime achievement award in 2006.

Connery married actress Diane Cilento in 1962. Before divorcing 11 years later, they had a son, Jason, who became an actor. He married the French artist Micheline Roquebrune, whom he met playing golf, in 1975 and she survives him. 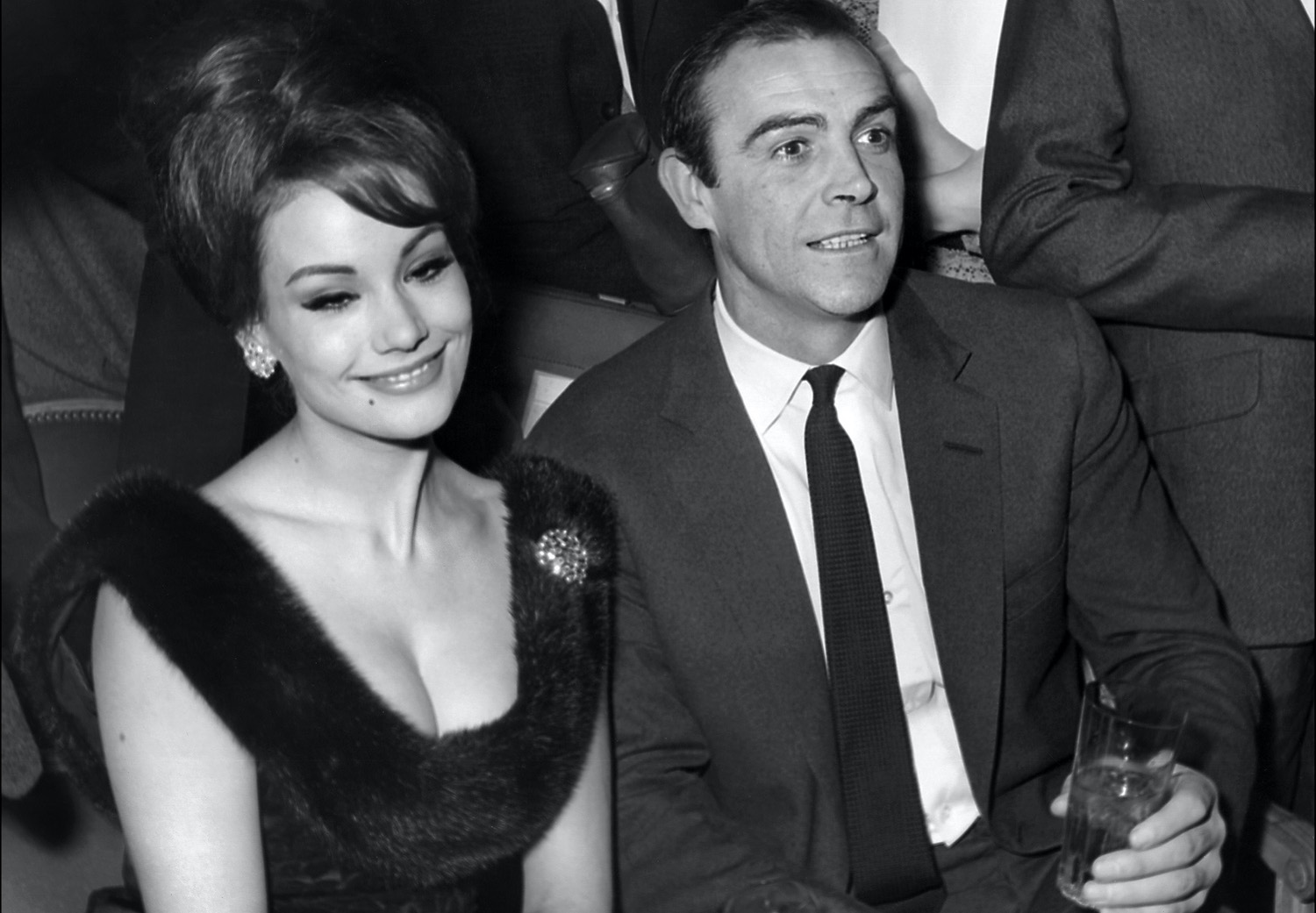 Sean Connery and Claudine Auger, has co-star in Thunderball, answer questions at a news conference in Paris in 1965, when he was at the height of his fame as the first James Bond. (AFP File Photo)