In the land of the blind
Life
Arts & Entertainment

In the land of the blind

Watjanasin Charuwattanakitt, curator of Palette Artspace, was upset by the news that authorities couldn't find any sex workers in Pattaya's infamous Walking Street or Soi Pan Suk in Pathum Thani, and that the director of the Government Lottery Office couldn't find any overpriced ticket-selling on streets. He wondered why the authorities pretended to not see these problems. 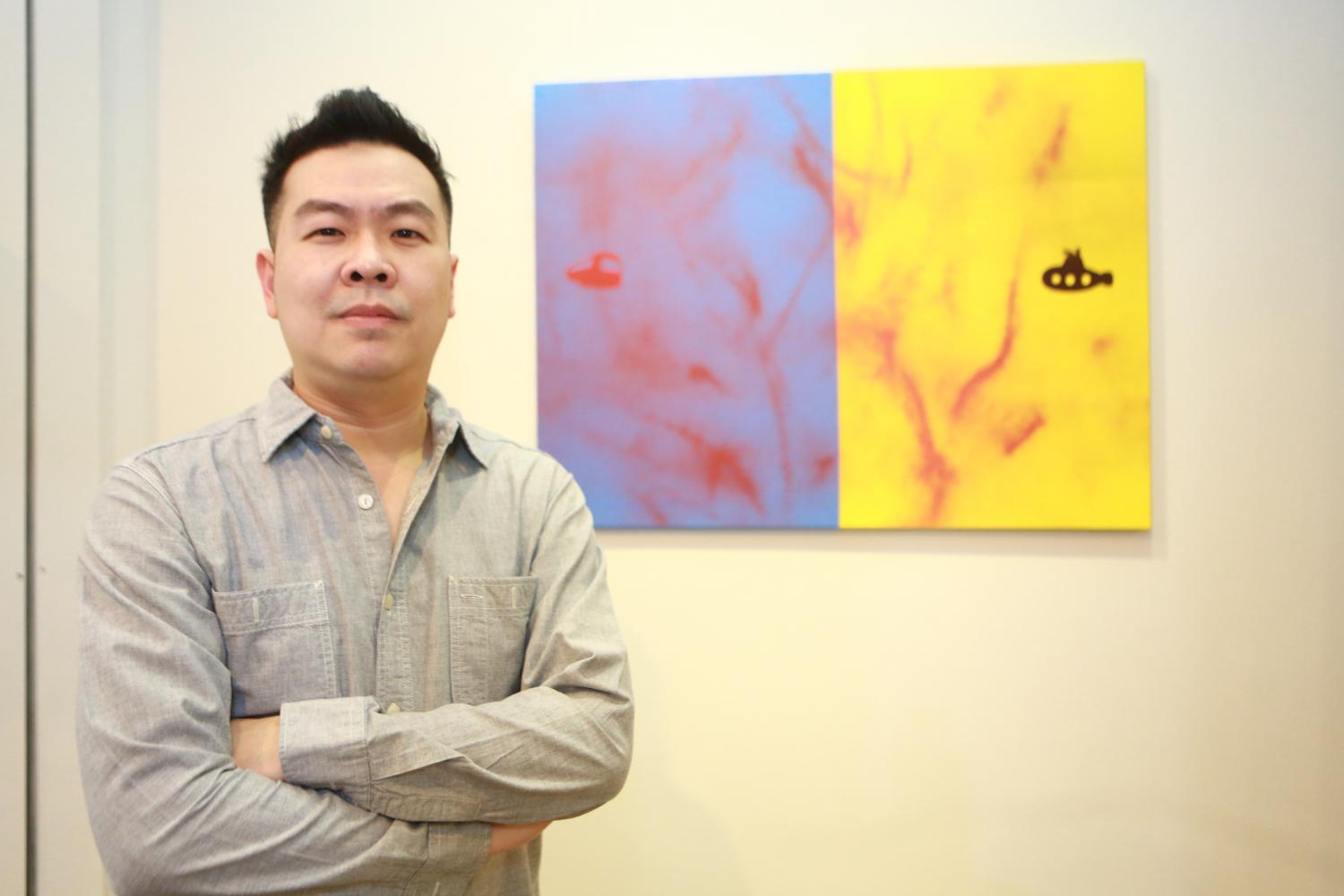 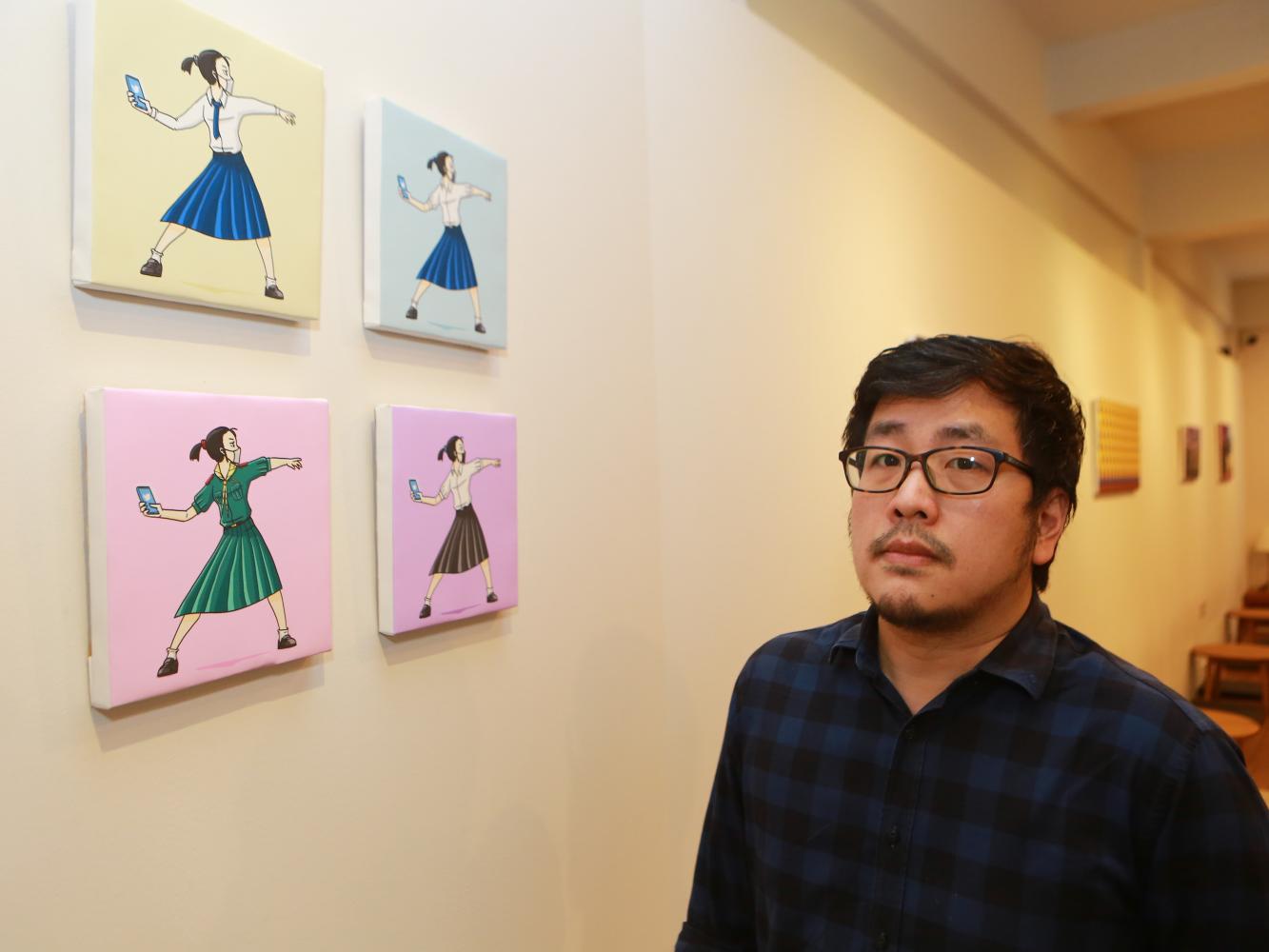 "How could authorities not find any sex workers in Pattaya or any overpriced lotteries? I once found a seller who charged 1,500 baht for five tickets. If the authorities accept that there is a problem, it is possible that it can be solved," said Watjanasin.

Watjanasin discussed how the authorities overlooked problems with his brother, Nithinaris Charuwatkul, also a curator at Palette Artspace, who decided to organise an exhibition titled "Scotoma" by Zebracan and William Char.

Scotoma means a partial loss of vision or blind spot in a normal visual field. The collection title was inspired by his mother's eye symptoms where floating threads, or fragments of cobwebs, would appear in her field of vision. The collection intends to criticise authorities who have a blind spot for wrongdoing because they can't see or refuse to see what is in front of them.

"In 'Scotoma', my five paintings are named 'Eyeballs Or Eye Meatballs'. It is a wordplay between eyeball and meatball. During my high school days, when I was careless and made mistakes in my work, a teacher told me to be careful and teased me by asking, are your eyes meatballs? This meant if I had eyeballs, I could see things better," explained Watjanasin. 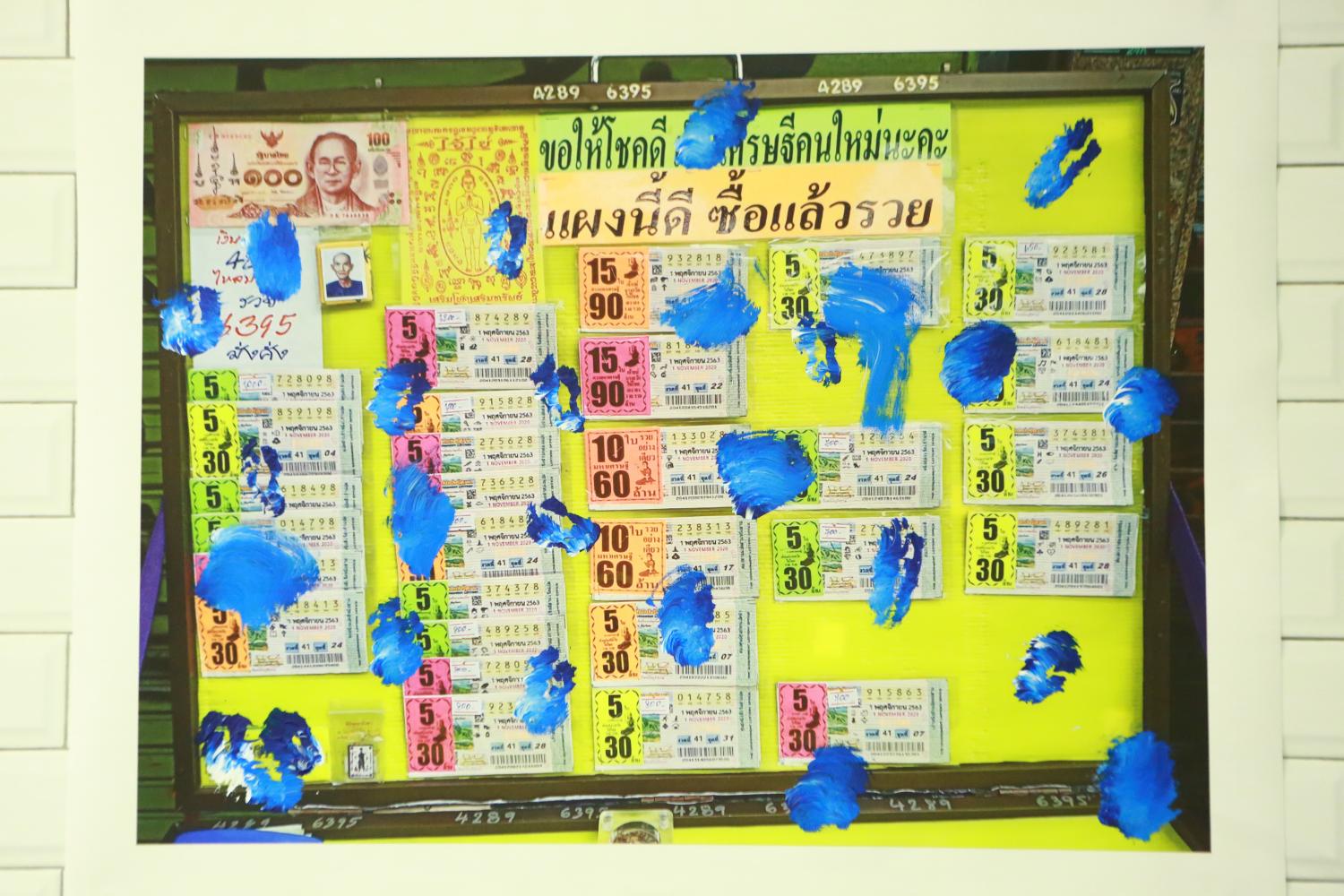 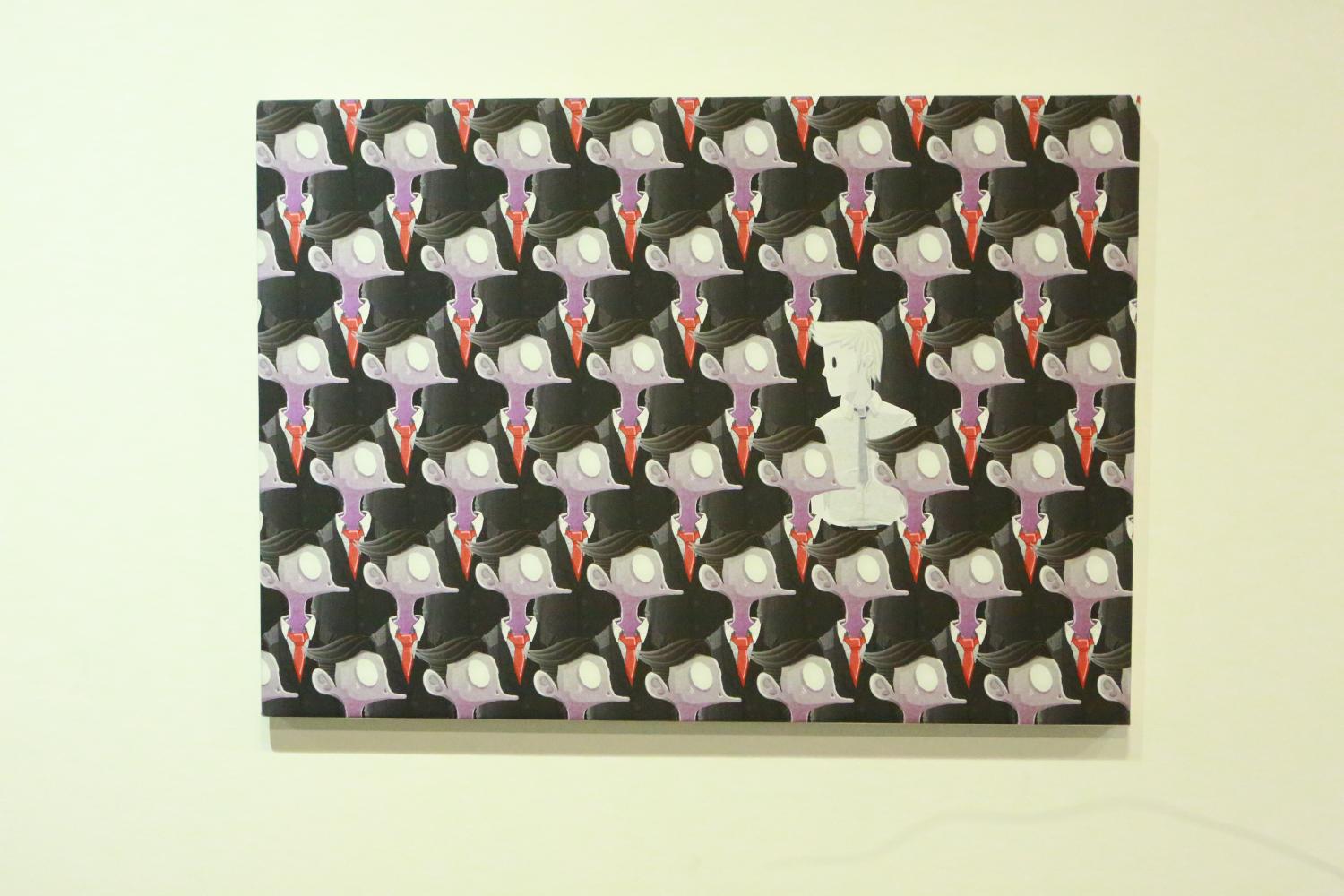 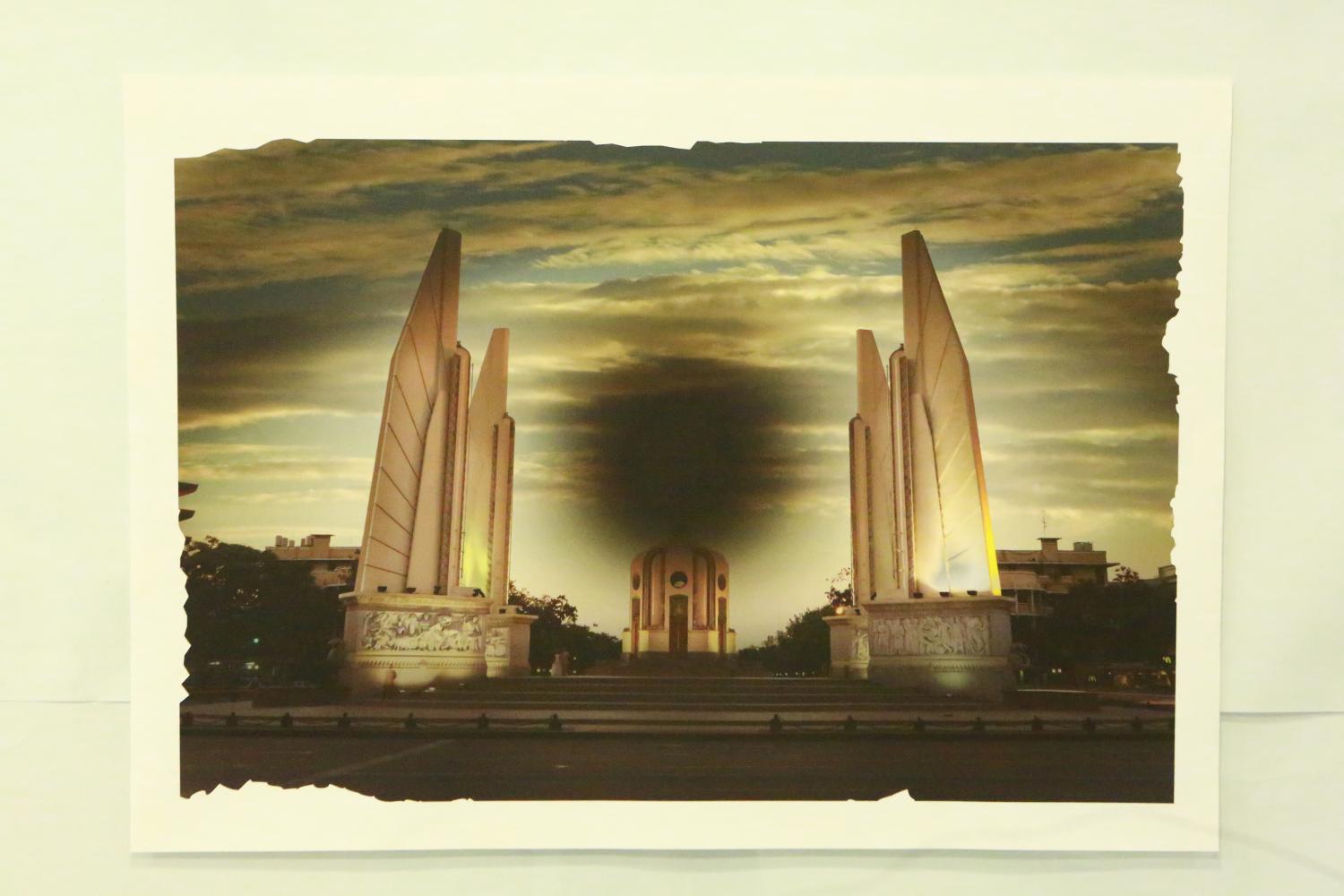 Central Blind Spot reflects that the constitution is the main problem protesters want to change. 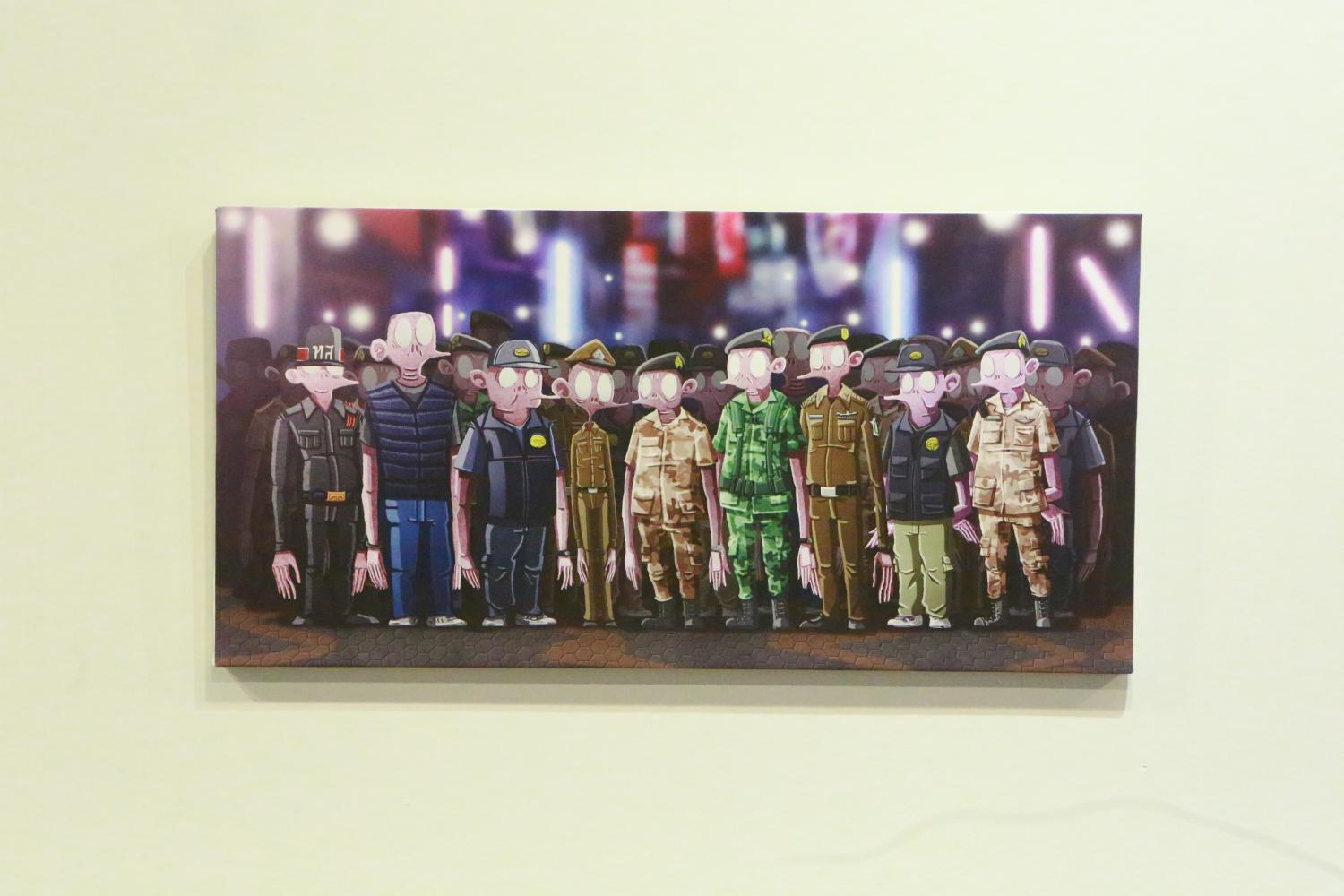 Blind Spot satirises the ignorance of the authorities.

Nithinaris named his five paintings 'Blind Spot', which implies the authorities can't see properly. He said his artwork emphasises what people are used to seeing, but if everyone steps back to look carefully, we may realise it isn't something normal.

"There are many issues that we are used to, and avoid discussing. However, young people talk about them on social media openly and I think it is better than just gossiping about it. 'Blind Spot' refers to a spot that we can't see or it is too close to see. Visitors have to step back to see my artworks properly," said Nithinaris.

"Scotoma" is the first exhibition for the siblings as artists. Watjanasin, or William Char, is self-taught who learns from other artists and instructors. He used mixed media to create 'Eyeballs Or Eye Meatballs'. Some artworks are photos on canvas mixed with some painting. Nithinaris, or Zebracan, worked as a video game designer in San Francisco before returning home to work in the commercial art field. He accepts that he doesn't have a certain style because he has to work for clients. In 'Blind Spot', he tried a technique that he hadn't done before which is to have digital art on canvas.

The siblings decided to have political messages because they think politics affects everything.

"Politics have a strong impact on economy and our lives. If politicians can solve problems, our lives will be better. I was a protester 15 years ago. Now, I'm a 40-year-old father of a daughter, so I don't want to go to a rally, but I understand young protestors. I'm wondering what will happen in the next 20 years. Will we continue to have rallies forever? I don't want a future like that for my daughter," said Watjanasin.

"I join many rallies to see the atmosphere. Every rally is arranged because protesters are in trouble. It doesn't matter which side protesters take on. They take to the streets to express their demands to the government. In this era, youngsters are very enthusiastic about protests and I think I should record this as artwork," said Nithinaris.

Watjanasin includes many scotoma conditions in "Eyeballs Or Eye Meatballs". One piece, Eye Floaters, represents a condition whereby a patient sees something floating in their field of vision. The artist uses a photo of lotteries on a stall with patches of blue to represent floating spots that cloud a person's vision to criticise overpriced tickets. While My Tax was created to test people's blind spots, and Central Blind Spot is a photo of Democracy Monument with a dark spot in the centre.

"We can test blind spot vision by closing one eye. For instance, close the right eye and use the left eye to look at the right side, a submarine, in My Tax. We can move forward or backward while looking until the submarine disappears. The left side is a bus. My Tax raises a question as to which one do we need more -- public transportation or a submarine. Central Blind Spot depicts the severe condition whereby a patient sees a dark spot in the centre. This artwork refers to the constitution which is the main problem that protesters want to change," said Watjanasin.

Blind Spot is a highlight artwork by Zebracan. It was inspired by a report that police and soldiers went to Pattaya's Walking Street and couldn't find any sex workers. The artwork was created to satirise the ignorance of the authorities. Twitter Thrower consists of four paintings of girls in student uniforms holding mobile phones and using Twitter.

"Twitter is a weapon of the young generation. A study found that girls are involved in rallies more than boys. In the past, we usually saw only university students participate in protests. To see female high school students join a rally is something unusual. Their movement really strikes a chord with me," said Nithinaris.

Nithinaris created a character, P.man, for the artwork Turn Left, Turn Right. P.man was inspired by a hungry ghost called Pred. "I saw a debate in a parliamentary session and found that many members of the parliament waste valuable time during debates. Most MPs have similar viewpoints while the student or the person in the white shirt in the artwork has a different perspective," explained Nithinaris.

As curators who appreciate art, the siblings don't aim to sell their works, but they hope to attract visitors.

"We would like to have people view our exhibition, including people who think differently from us. I don't like to divide people into separate groups due to different opinions. I believe there are people who are reasonable and open minded, as well as people who are extreme and illogical. I think we can discuss peacefully with reasonable people," said Watjanasin.