Alex Face aka Patcharapol Tangruen -- a renowned Thai artist -- has always been aware that his works will not last forever. While he may create an incredibly impressive mural today, it might be erased tomorrow as it is either painted over or the wall is simply torn down. The Covid-19 pandemic has only emphasised the fact that many things are vulnerable and uncertain. During the lockdown, Alex's wife ordered flowers for their home and the artist and his 11-year-old daughter created their own still life paintings of blossoms and wilting flowers. His iconic character -- a moody-looking three-eyed childlike figure in a rabbit suit -- is also included in a painting, and that is how he began creating his latest collection titled "Monument Of Hope". 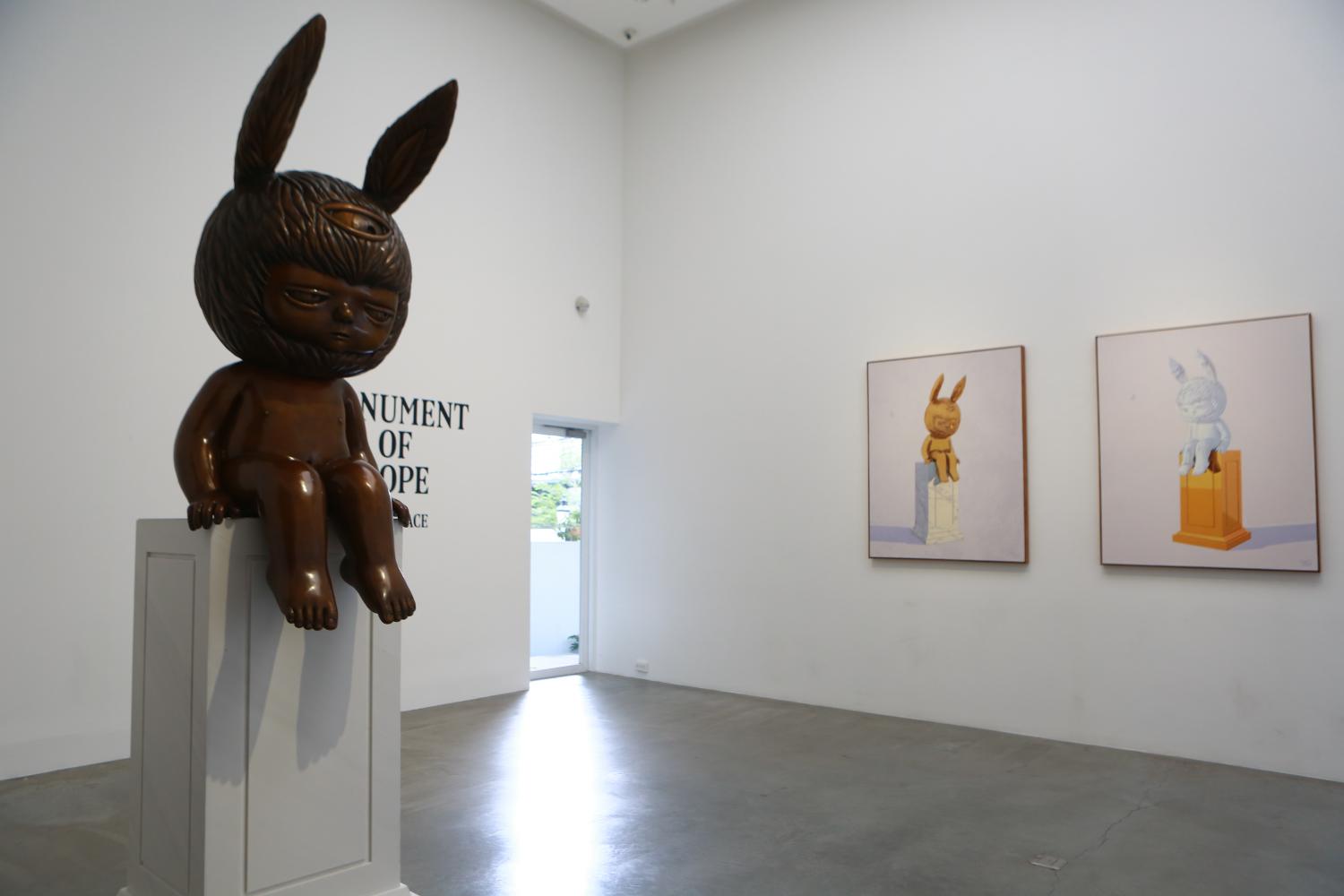 On view now at Bangkok CityCity Gallery, the "Monument Of Hope" is divided into two parts. The first section covers still paintings that Alex painted during the stay-at-home mandate and are being displayed in a cosy Bookshop Library. The main gallery mimics the contemplative viewing experience of Europe's national galleries. Oil, acrylic and spray-on-linen paintings -- New Bloom No.1, Faithful Creature and Dreamer -- depict a three-eyed character along with luminous flowers and dark backgrounds in solid wood frames. Apart from paintings, Alex also created two bronze sculptures, Monument Of Hope and Fragile Petals. Monument Of Hope portrays a three-eyed character sitting on a plinth while Fragile Petals depicts a three-eyed character in a petal skirt. This sculpture is also the biggest bronze Alex ever designed. The artist creates sculptures as monuments because they are more permanent. 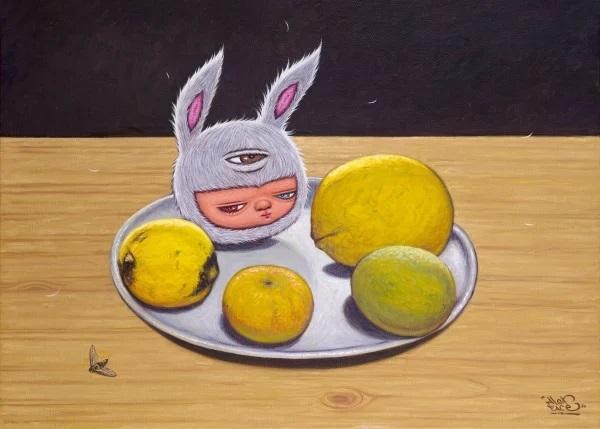 Among The Fruit was drawn from still-life objects in Alex's home.

"Since murals can be destroyed easily, my work is always impermanent which is why I focus more on using durable materials such as bronze which can last a thousand years. I also realise that monuments are built to commemorate something which is why I designed Fragile Petals because I wanted to create a swirling skirt from solid material. In it, the character sits on Monument Of Hope because it feels tired after waiting for hope for a long time. Creating sculptures is fun and challenging because unlike a painting, I have to look at designs from a three-dimensional view," he said.

The 39-year-old artist titled his exhibition "Monument Of Hope" to refer to hope for the new generation. 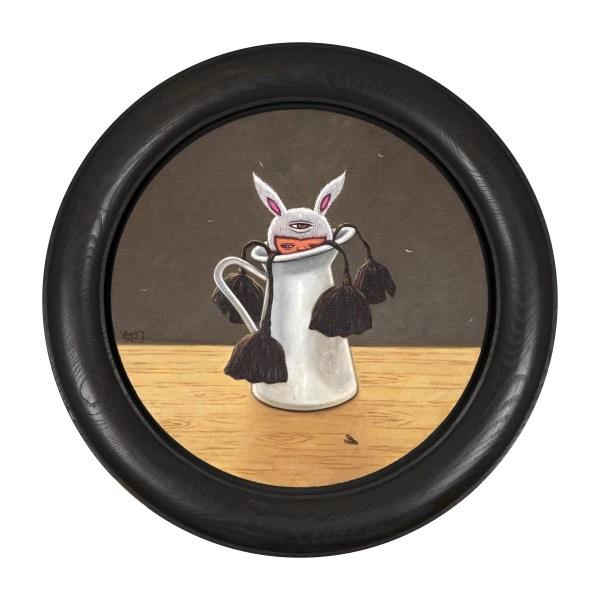 "Flowers symbolise hope and today the new generation has hope similar to a flower that is blossoming in their thoughts. They hope for a better future and their strength gives life to hope. In fact, we can't live without hope. The three-eyed characters in 'Monument Of Hope' are waiting and hoping that everything becomes better with time," said the artist.

Alex is interested in political and social issues but people must interpret the message in his work because he does not tackle issues directly like many street artists. Earlier this year, his previous collection "Playground's Border" depicted a three-eyed icon lying down surrounded with barbed wire. The painting satirised an issue in the US about undocumented immigrant children who are separated from their parents due to the deportation of unauthorised immigrants.

"The collection was displayed at Vertical Gallery, Chicago, earlier this year. I discussed the issue with my American friends. Barbed-wire symbolises an unwelcoming border but it isn't limited to only a country's border. It can also mean an invisible border. In Shenzhen, China, I was at a chic café located next to a port and labourers' shacks and I saw many people visit the café to take photos for social media. Some of them took it so seriously that they even brought a change of clothes. However, later I saw a ragged child who came from a shack run to the café and he was stunned. The café was like a different world to him. I felt as if there was an invisible line that divides people," explained Alex. 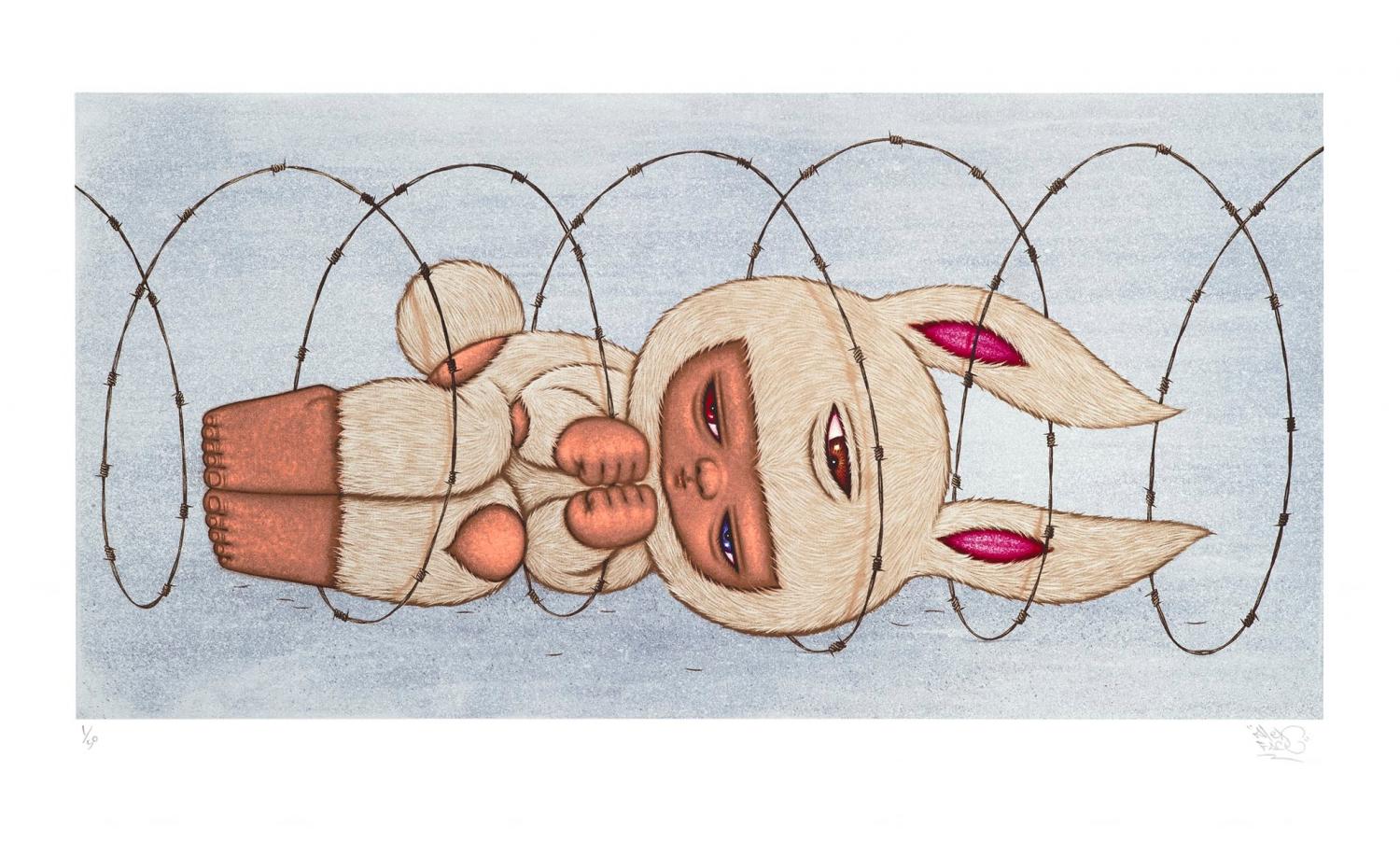 A painting from the exhibition 'Playground's Border'.

Alex has been a street artist for more than a decade. He admits that his mural art is illegal if he doesn't ask for permission from the owner of the site where he paints. He also found out this year that police officers have become more strict about graffiti than in the past due to political conflict.

"Most murals are used to express opinions related to politics and it is one of the purposes of street art. In fact, street art can create a ripple effect. Even though building owners like mural art, they do not want to take any risk because of political conflict that may arise," he said.

Last year, Alex travelled extensively. He spent a month in Europe and another in the US to exhibit his paintings and created mural art in many places. The artist feels ecstatic when his artworks encourage people in a community to gather and participate in an activity together. 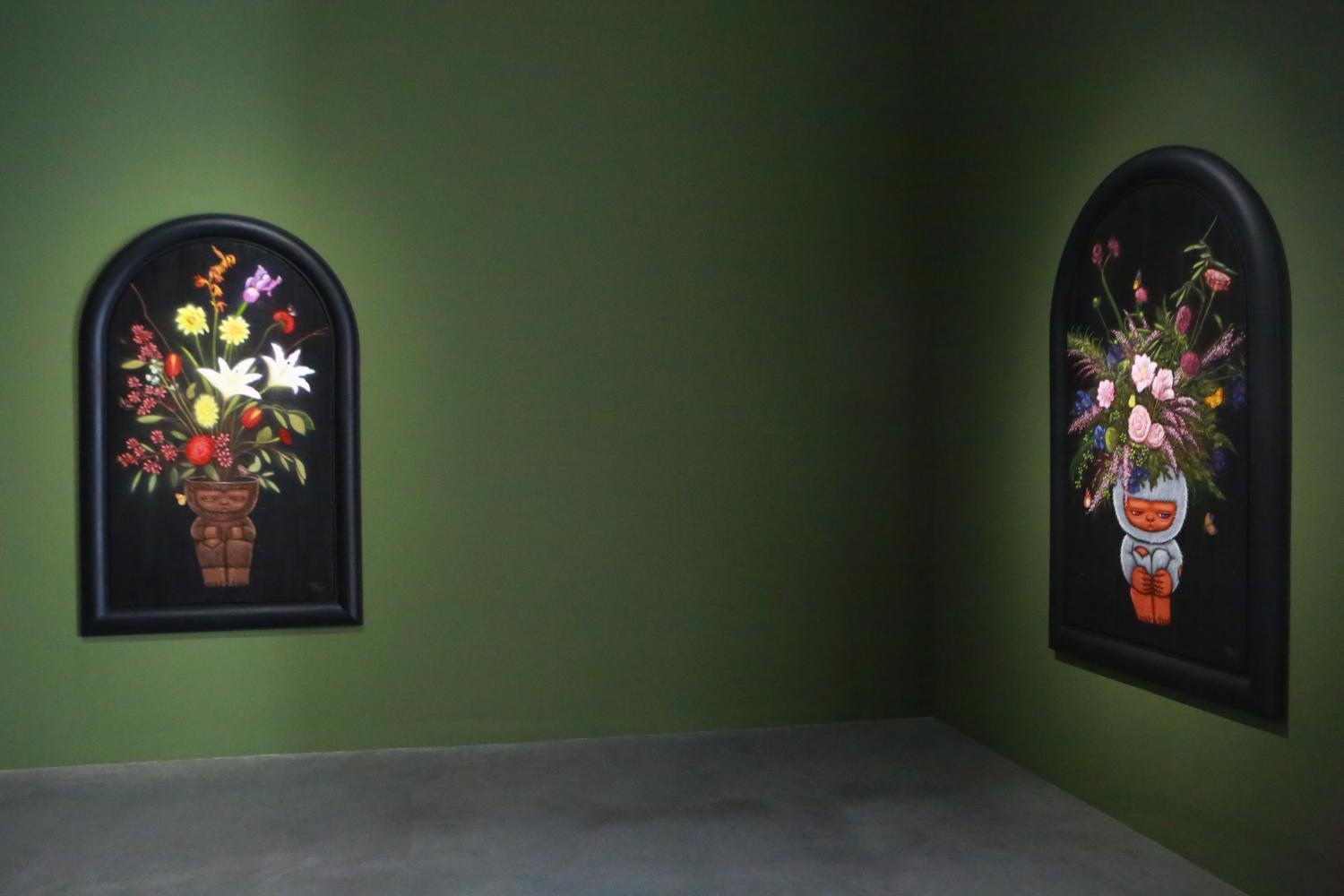 "I was in the small town of Le Havre in the north of France. My friends took me to create mural art there and people in the community cooked for us. On my final day, people in the neighbourhood brought us some Champagne. Children ran around and many people gathered together and had a party in the area. Some people even cried and said they greatly appreciated our artwork. They told me that they have never had that kind of party before. I'm happy to encourage people to go out and join in an activity together," he said.

Before going to New York, he was also worried about discrimination because of what he had seen in movies. However, his attitude changed after he realised New Yorkers were friendly.

"Americans don't mind talking to strangers. I wore a t-shirt with the name of a Thai band Rap Against Dictatorship and New Yorkers really liked that. They always talked to me about it. I also like the energy of the city. Everything goes so fast. I felt like I had to go out and create mural art every day. We sometimes created more than a piece a day," said Alex. 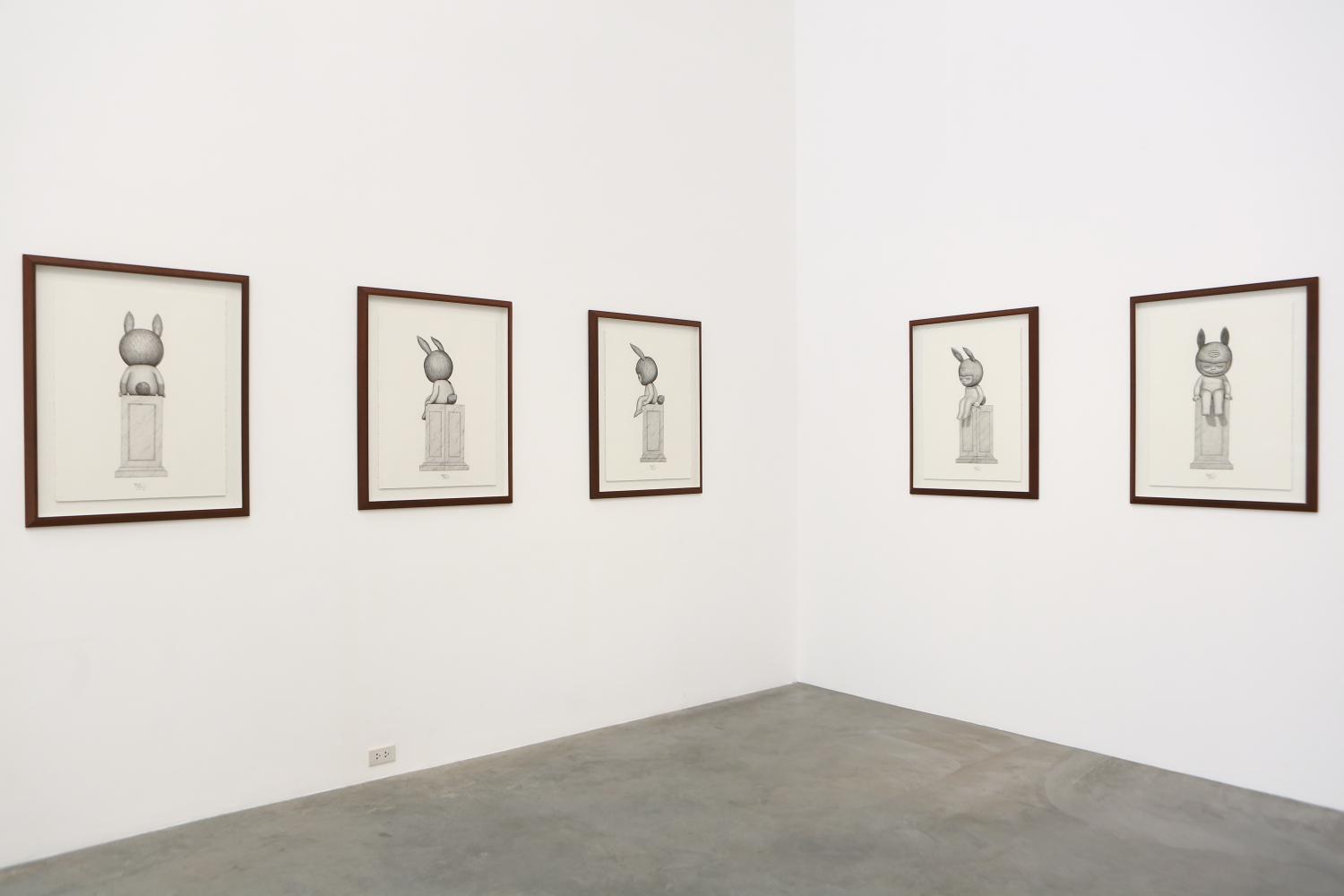 Several views of Monument Of Hope (Pencil on Paper).

The Thai art industry is growing but to have an iconic character and become successful like Alex is still rare. Alex suggested that aspiring artists shouldn't focus on becoming an iconic character. They should express how they feel honestly through their art.

"Art isn't about creating a character. It doesn't matter whether aspiring artists will come up with their own iconic characters or not. An artist has a duty to sincerely express how he/she feels because art is a record of his or her moment and that makes an artist feel happy. Even if there is no response to an artwork, it is an opportunity for an artist to release how he or she feels. I notice that if I don't have time to paint, I will feel bad. Working on a painting makes me focus and have peace of mind," said Alex.