It seems like a very challenging task to successfully adapt hit video games into live action TV and movies as the quest has frustrated far more creators and studios than it's rewarded. High expectations from diehard fans often hobble these adaptations from the start. Yet one fearless filmmaker is Paul W.S. Anderson who moved from one video game franchise adaptation to another, beginning in 1995, with the martial arts fantasy Mortal Kombat to the zombie apocalypse action-packed Resident Evil franchise, four of which he directed. Anderson is back again with Monster Hunter, his latest directorial sci-fi action effort, now showing at cinemas.

Loosely based on the immensely popular role-playing video game series developed by Japan's Capcom and China's Tencent, Monster Hunter stars Milla Jovovich, who is married to Anderson in real life and has starred as the main protagonist in all of his Resident Evil movies. Here, Jovovich brings an entirely new face to the original game franchise as she plays the US Army Ranger Captain Artemis who's on some kind of UN mission leading her unit to track down the disappearance of Bravo Team in the middle of a desert. Instead, an unexpected sandstorm engulfs the team into some kind of portal that transports them to an alternative universe. While in this unfamiliar environment, Artemis and her team soon encounter the frightful creatures of this strange desert world that are immune to their firepower, and their rescue mission has now become a battle for survival. Monster Hunter also features Thai martial arts star Tony Jaa as a mysterious hunter whose unique skills allow him to stay one step ahead of these monsters lurking underneath the sand.

Life recently had a chance to speak with both the director and its main star, Anderson and Jovovich, via Zoom for a fun Q&A about bringing the hit video game and its visual effects to life, the origins of Jovovich's Captain Artemis, and the dynamic collaboration between spouses that make movie magic.

What is it about the Monster Hunter franchise that motivated you to reimagine the video game genre again? How long did you prepare for the project before actually starting filming?

Anderson: Well I first played the video game in Tokyo 12 years ago and I fell in love with it. I think no one outside of Japan had really heard of Monster Hunter at the time. So the original idea for a movie goes back over a decade. We started filming the movie two years ago, and then there's been a year of post production to bring all the creatures to life, so it was a very long process.

Can you talk about the origin of Captain Artemis, who's new to the Monster Hunter universe? And what's the main difference between her character and Alice from Resident Evil?

Anderson: The experience of playing Monster Hunter is you create your own character, unlike Alice or Lara Croft [Tomb Raider], where they have a certain look and a certain backstory. So, I felt there was an opportunity to have a completely fresh character go into this world and see it with fresh eyes.

Jovovich: For me, Captain Artemis is a real woman. When I was preparing for this part, I became friends with a real female Army Ranger. And after listening to her stories and asking her so many questions about her experiences, and how difficult it was for her to get her Ranger tag, I couldn't believe it. She's a real superhero and a real woman too. And so I really wanted to bring that side to the character. The relatability and that feeling you could be friends with this woman, even though she was so extraordinary and so strong. She was somebody that you could have over for dinner as well. You could never imagine being friends with Alice or inviting her to your house for dinner. 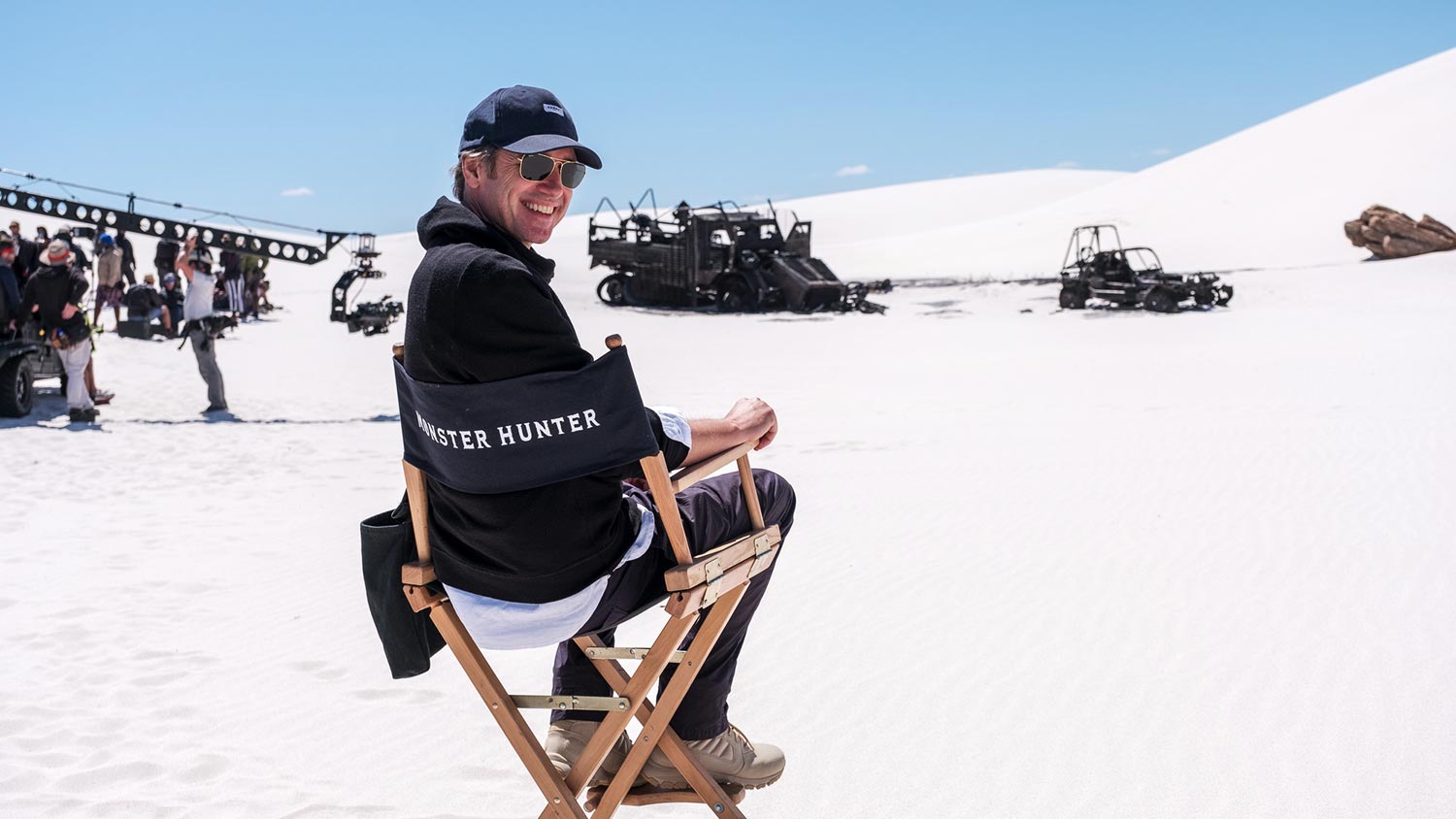 Director Paul W.S. Anderson on the set of Monster Hunter. 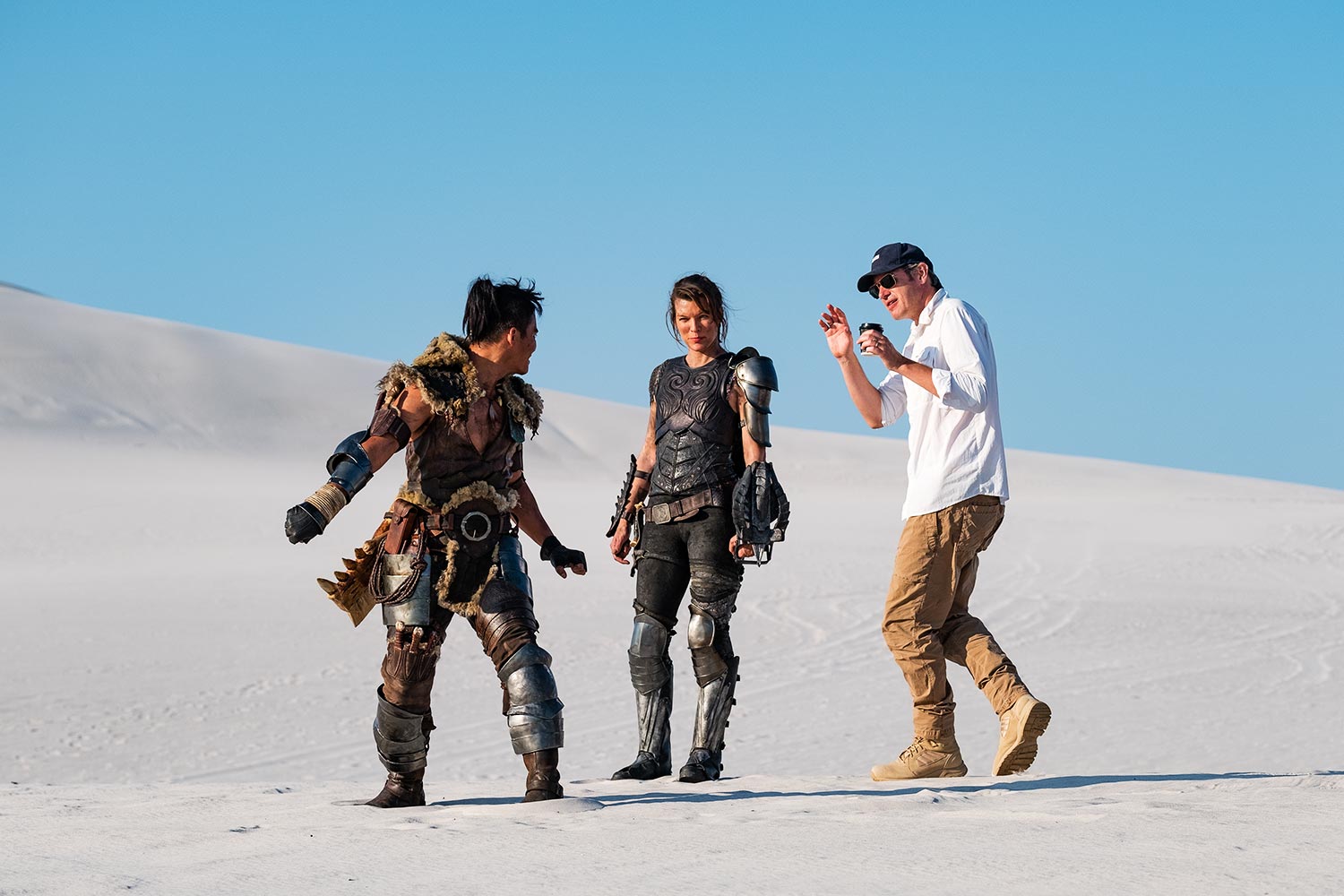 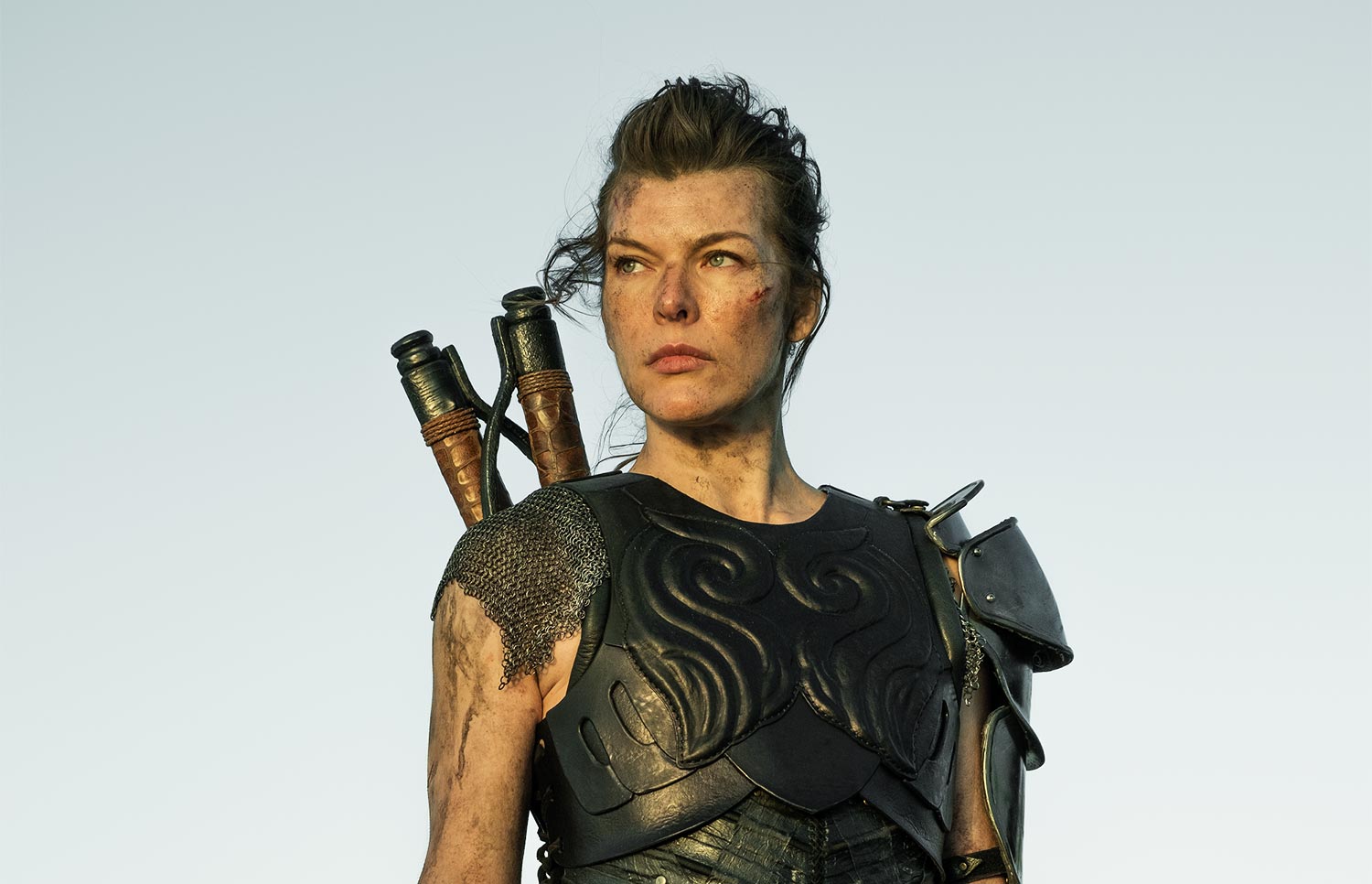 Can you share your filming experience or some of the obstacles that occurred?

Jovovich: Well, I think the main obstacle was definitely shooting in these extreme locations. It was very beautiful but at the same time, it was incredibly challenging. We were dealing with sandstorms, and just getting all the equipment together there. We were hundreds of miles away from any human habitation, so the challenge of getting 300 people into these kinds of locations was crazy. There's no internet and no electricity.

Anderson: Lots of snakes and lots of spiders. There was this spider called the Kalahari Ferrari, and it's incredibly big. They are probably as big as your hand and very hairy. They would run really fast and it was terrifying. They didn't want to bite you, but it was so hot in that landscape they wanted to get in your shadow to be in the shade, or ideally they wanted to crawl up your trouser leg and take cover there. So everyone got very aware that they had to tuck their trousers into their boots.

Monster Hunter has stunning visuals. Can you talk about some of these amazing locations that seem so far from real civilisation?

Anderson: We were shooting inland in South Africa and Namibia in 2018. There was an amazing place in Namibia called Sesriem Canyon, which had never been put on film before, so it is very exciting as a filmmaker to go and shoot something and bring the otherworldly landscapes to life. There's a place called the Valley of the Redwoods, which just looks extraordinary with all these pillars of rock that have big boulders balanced on the top of them. And then we shot in a place called the Tank Work. The place is very remote and very spectacular looking, which kind of feels like the dark side of the Moon, again in South Africa.

With all these locations, styles, costume designs and all other settings that you try to bring to life, I wonder how much did you have to speak with the original game's creators on a regular basis to get all the accurate information while filming?

Anderson: I tried to run everything by them because I really wanted them to be very happy and excited. Because I felt if I could get them excited, then the fans would get excited as well. I very much viewed them as the gatekeepers of the franchise. And so the costume design, the weapon design, and the creature design simplified everything because we tried to make it exactly as it is in the game. So the armour that Milla wears, it was all taken directly from the game.

Both of you have been working together for a long time with such vast experience in these types of sci-fi, action and fantasy worlds. What's the creative give-and-take like between the two of you?

Jovovich: We make such fun movies together and Paul has always given me the opportunity to go into these really magical worlds with him. And that's something I've always loved doing since I was a little girl. I'm so grateful to him for always writing these incredible characters for me, that make me feel so strong and empowered. Just being able to go into these alternative universes, is so much fun.

Anderson: I feel it [working with Jovovich] definitely makes things easy for me as a director. This was a challenging shoot as we were going into the middle of nowhere to shoot it. And when you have someone like Milla at the centre of your film, who's just so non-stop good-natured, and keeping everyone's spirits up, it really makes a big difference. So she kind of held together the whole cast and crew through a very challenging shoot.

Jovovich: I have to say it was so humbling working with Tony. He's such a master at what he does. I've had over 20 years experience making action films, but seeing Tony doing the stunts and the choreography with no wires. He really is like this in real life. I couldn't be more impressed and I just felt so lucky to be able to fight with him on screen, and to be able to learn from him. He's absolutely incredible and just such a great guy and so fun to be around. You know, we'd be talking and he would start rapping in Thai, and then he would do a backflip. I mean it's nice to have people around that always have a smile on their face and that are just so warm and friendly and easy to hang out with.