Growing up in Yala, I-na Phuyuthanon thought she was used to hearing news of violence in the Deep South, but when her uncle was shot while stepping out to buy ice cream for his children, it changed everything.

"Before my uncle died, whenever I saw news about violence in the Deep South, I felt sorry for the people who lost their family members and after that, I let it go. However, when the tragedy happened to me, I am not used to it anymore," said I-na, filmmaker and a lecturer at the Faculty of Fine Arts, Srinakharinwirot University.

The murder of her uncle inspired I-na to create her first short video titled My Fear My Everyday in 2013 which expressed her fear of losing a relative.

"I wanted to be the voice for my uncle's wife who has to now take care of three children by herself. I wanted to connect with her and stay by her side, so I created the video to express my fear. No matter where I am in the world, I am afraid of losing my family members and relatives who still live in the Deep South," explained I-na.

After My Fear My Everyday, I-na made several video arts including Women's Suppression (2017), The Stigmatic Victims (2018) and her latest, Harmonimilitary (2020), which is now on view at Bangkok Art & Culture Centre (BACC).

The idea of Harmonimilitary came when she interviewed a person for Stigmatic Victims.

"A man who was framed as a terrorist told me that he preferred to be shot and die like my uncle. He felt being a scapegoat was a living death sentence because he was arrested, went through a lawsuit and was released, and this circle began again and again. Many foreigners asked me why local people including these scapegoats do not move from the Deep South. It is because people there believe that God predetermines every event in their lives. We have to surrender to things that we cannot control. I titled the video Harmonimilitary because the military became a culture in the Deep South and Muslims try to harmonise with it in order to survive each day," she said. 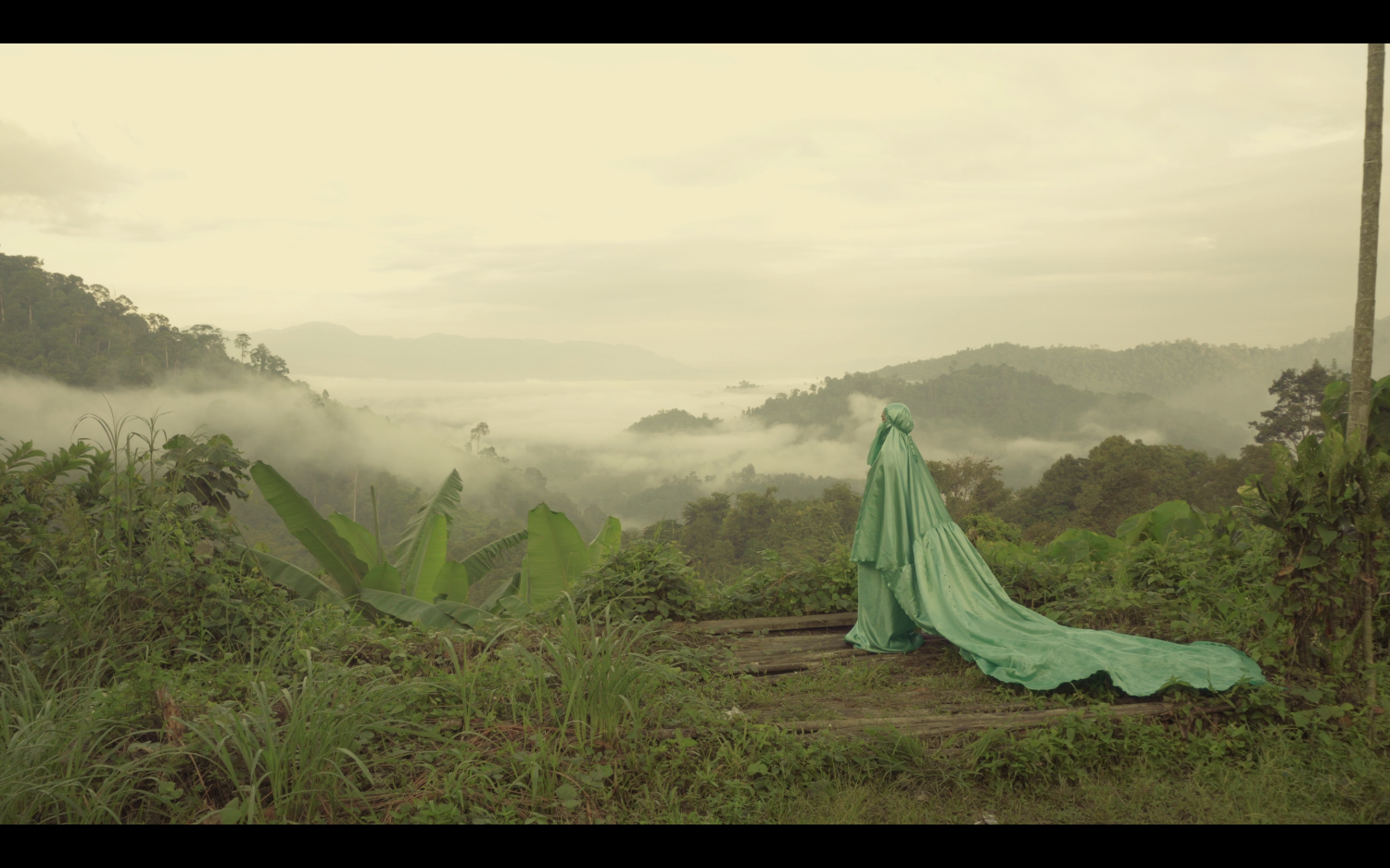 In Harmonimilitary, the camera follows I-na, who wears a green hijab and walks around Korlorgaway in Narathiwat. While the video depicts spectacular natural scenes such as a sea of mist and waterfall, viewers can hear the Muslim prayer of supplication and request, Dua, and the sound of a typewriter.

"The green colour hijab stands for nature and military. The prayer in the video is called Dua, which asks for blessings. In our belief, Dua can heal Muslims and helps us to have a peaceful mind. In the video, there are many prayers. It begins with how God creates us and predetermines us to live in this planet. God says it is a test and we must go through it. If we pass the test, we will go to the next life, which can be in heaven or hell. The sound of the typewriter represents the government or military officers who still use a typewriter to report what happens in the Deep South. All the beautiful places that I filmed in the video were locations of tragic incidents," said I-na.

All of I-na videos are artistic, so they are different from documentaries or news reports about the Deep South. Some people may find the videos difficult to understand, but it is her goal to raise questions about the region.

"I do not intend to make it confusing, but I want to raise questions about the unrest in the South. Viewers may wonder what is the meaning behind the images they see and the sounds they hear. If viewers feel curious about anything in the video, they will try to seek the answer or ask me questions. However, if they do not feel anything, they will let it go, and I do not want to force anything," said I-na.

In addition to raising questions about insurgency in southern Thailand, I-na also aims to show the beautiful views in Korlorgaway. 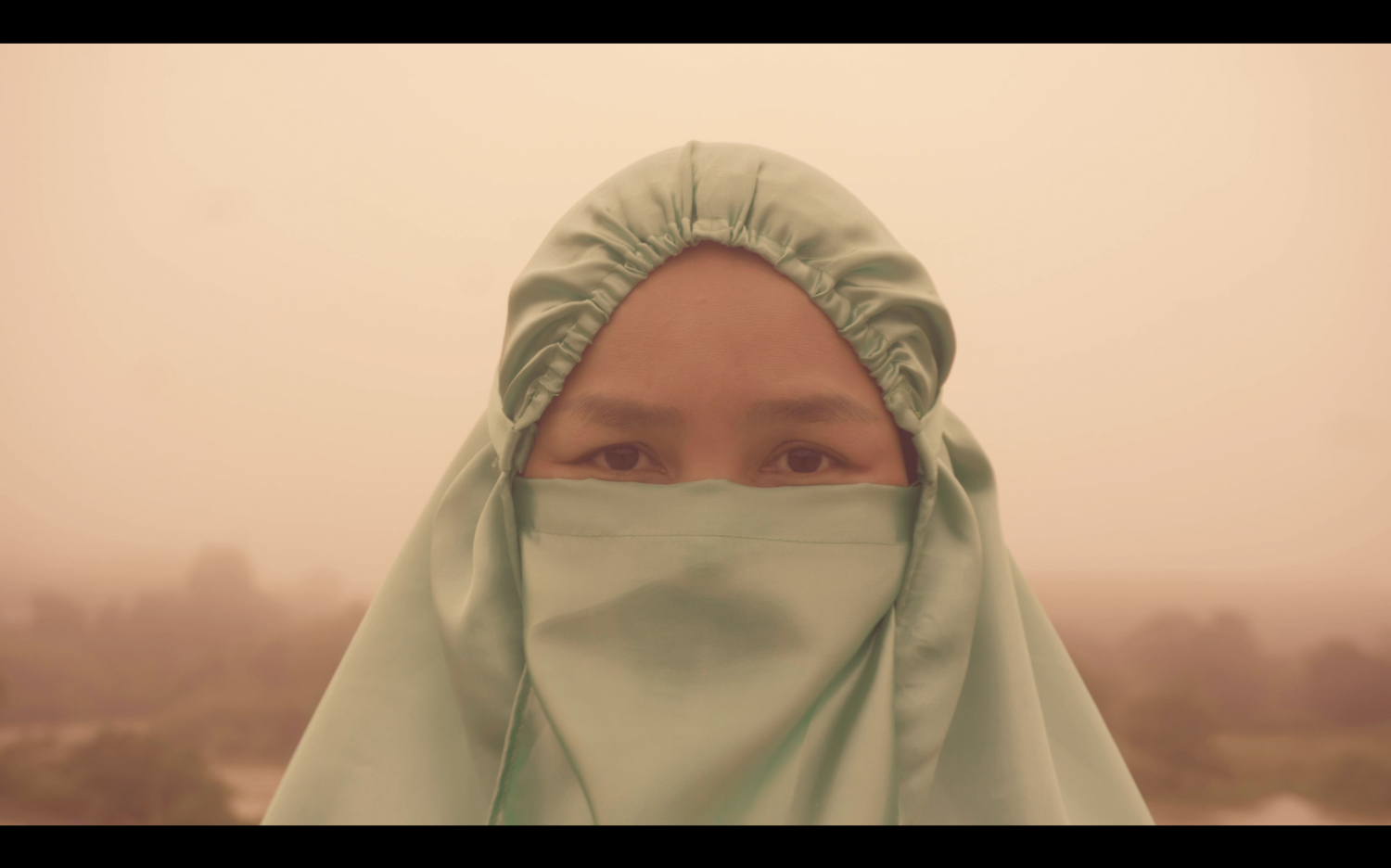 "Stigmatic Victims is a video about scapegoats and one of them lives in Korlorgaway. He was accused of being a terrorist and suffered much public humiliation. He later won his court case and was declared not guilty. However, after the video was released, people felt that Korlorgaway was a terrifying place. I felt guilty that the video gave a negative impression of the area, so I presented the beauty of Korlorgaway in Harmonimilitary to show that there is nothing wrong with the place," she said.

Before working on each video, I-na always visits areas in the Deep South. She interviews many people, but in Harmonimilitary, there are no images or sounds of interviewees. Why did she have to go all the way to the Deep South to conduct a research?

"I do not want to visualise my past impression of the Deep South. I want to express the present, so I have to go to the area to record new information and new sounds. I do not want to be an outsider who speaks about them from an outsider's perspective," she explained.

"I try to keep my fear from surfacing. If I do not die there, I will die another place else. Life is predetermined. When I visited villagers, I felt warm. They felt happy when people who understood them visited. Four years ago, I took 13 university students there to do research and after that, the students travelled in the Deep South on their own. I hope that my video will make viewers understand more about the situation in the Deep South. I also want them see the beauty of the area. I vowed that I will create videos about the Deep South until I die, even though my video is only a small voice since it is not mainstream media," said I-na.