Growing up in the US state of Maryland, Thai-American artist Raj Bunnag learned about drugs during middle school. Fortunately, he came through that period unscathed, unlike many of his Latino and black friends who were arrested for drug use which changed their lives completely.

"My white friends who were arrested with lots of weed had good lawyers and family connections, so they received light sentences. Their lives were hardly impacted. In contrast, when my Latino and black friends were arrested even with small amounts of weed, their lives turned upside down. There was no second chance for them," said Raj. 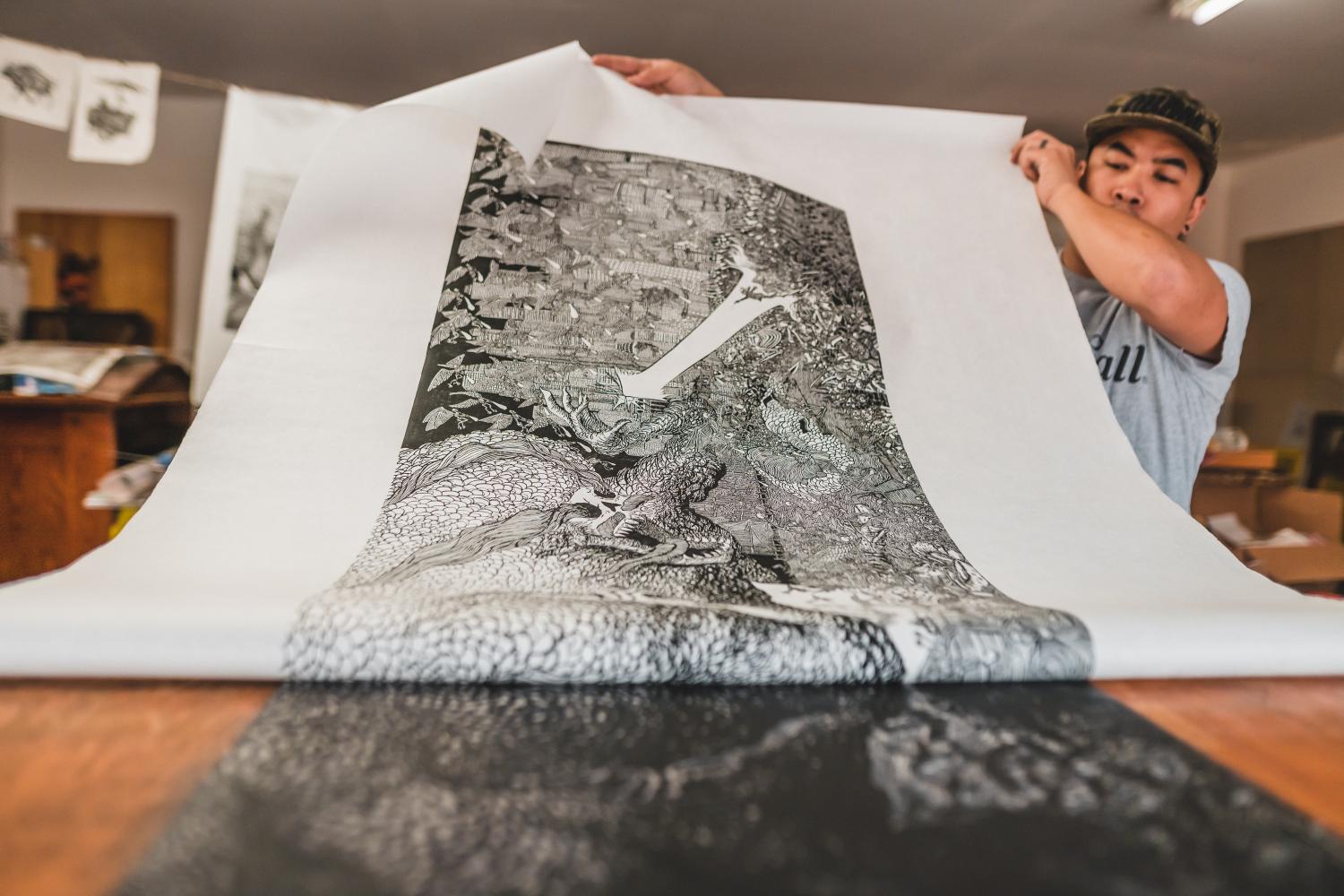 The lives of Raj's friends are examples of Americans who have been affected by the US government's global "War On Drugs" which began in the early 1970s and was aimed at decreasing illegal drug production, distribution and consumption. The campaign has been widely criticised for being ineffective and its tendency to excessively penalise vulnerable populations. However, it is still an active programme and receives an estimated US$51 billion (1.5 trillion baht) in funding annually.

As a printmaking artist, Raj has tackled issues related to the anti-drug campaign by creating exceptionally detailed and large-scale series since 2013. The 35-year-old artist has designed various monstrous characters to represent drugs, which ruin lives, societies and the world, in his prints. Of a total of six pieces, three relief linocut pieces -- Cocaine Hurricane (2020), Weedsquatch & The Gorilla Glue Guardian (2018) and Cheaper Than Oxy (2016) -- are now being showcased at his first solo exhibition in Thailand titled "Fantastical Manifestations" on view at SAC Gallery.

"The war on drugs is a crime against humanity because many lives are destroyed due to the US incarceration system. It is another form of colonialism. It is interesting to see how people, especially politicians, are not willing to speak out against this campaign because it receives a lot of funding. I want to bring to light the inherent racism that surrounds the war on drugs. In the US media, Latinos and African-Americans are associated as drug users, however, from my experiences, young whites have more access to drugs since they have money, privilege and time. One of the most important reasons I am working on the series is because everyone has someone in their lives, whether a friend, a family member, a relative or a colleague or know someone who has lost someone to drugs. This isn't only about illegal drugs. Everyone is on something," explained Raj.

To create relief linocut prints, Raj meticulously draws images onto a block of linoleum. Then, the block is coated with a thin layer of black ink before a large sheet of acid-free paper is placed over the top. Afterwards, both the block and paper are run through a printing press that exerts a heavy, even pressure which transfers the image from the block to the paper. Raj discovered printmaking when he was in community college, after which his life changed.

"Printmaking is a combination of everything. You need to have a good foundation in art and it requires an understanding of various art forms such as drawing, sculpting and engraving. Before I took my first printmaking class, I was doing pre-dental, however, I was miserable since I am artistic. This printmaking class lit a fire in me. After taking it, I decided to pursue art. My printmaking journey started 15 years ago and I have displayed my work throughout the US," he said. 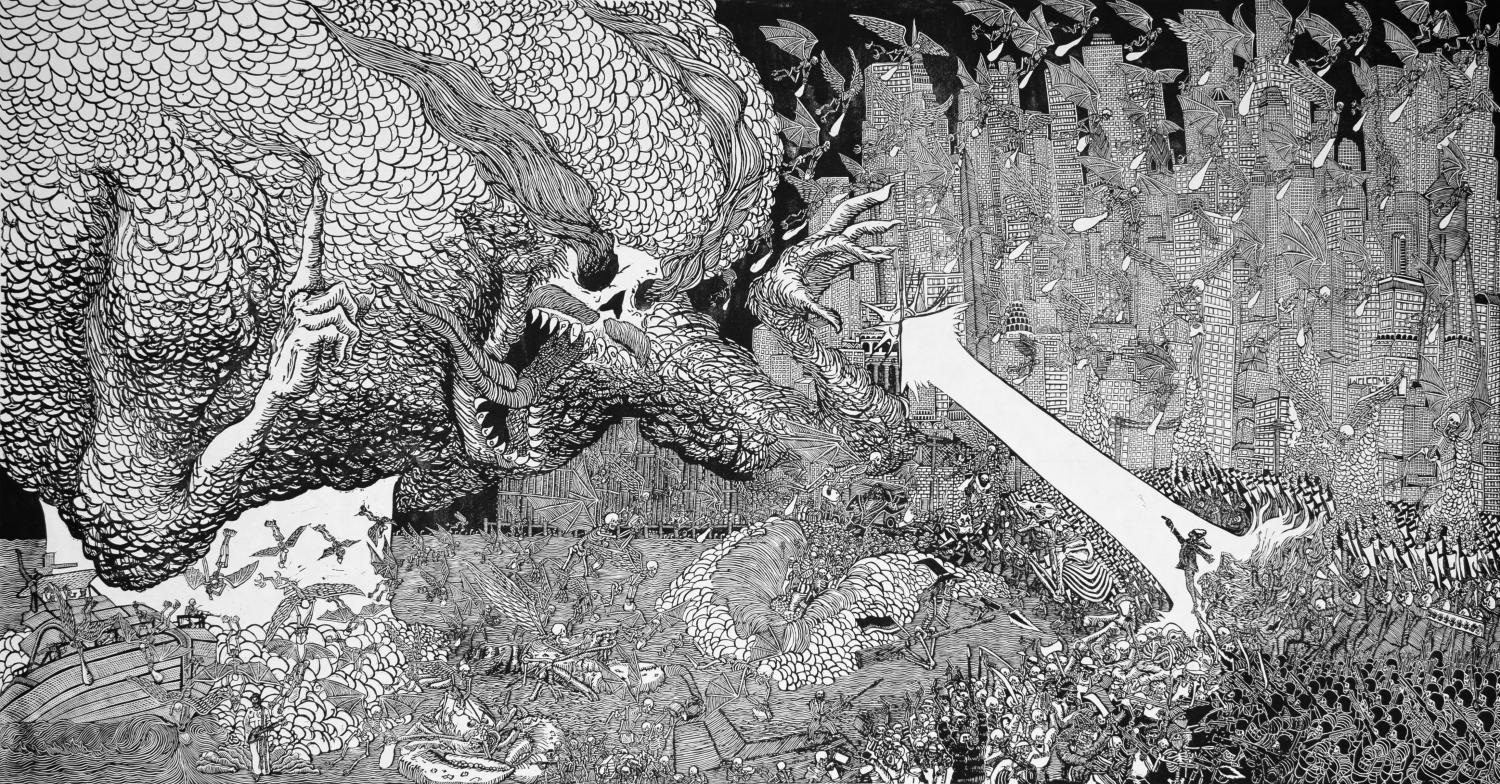 The artist researches historical and current pop culture issues to come up with his visuals and express his ideas. The three printmaking pieces Cheaper Than Oxy, Weedsquatch & The Gorilla Glue Guardian and Cocaine Hurricane were created from different issues related to the war on drugs. For example, Cheaper Than Oxy depicts a seven-headed dragon and is about the opioid epidemic -- misuse and addiction to opioids -- that has led to countless overdoses.

"America forgot that black Americans were affected by heroin and opioids. The government only started to care when the epidemic started affecting white kids. Moreover, the problem surrounding heroin use in the US is an old issue. Yet, it was the black community that was destroyed by it in the 70s," he said.

Thai viewers can relate to Weedsquatch & The Gorilla Glue Guardian the most because the weed guardian was inspired by an image of Hanuman in the Temple of the Emerald Buddha.

"The weed guardian protects the weed and people like politicians and businessmen. That is reflective of the legalisation process so far. White people legalised weed in some places but people of colour are still going to jail. The men in suits in the print represent the army of police waging war against non-violent drug users," explained the artist.

Cocaine Hurricane is his latest work. Raj intends to tackle drug smuggling through the border. The background image represents the coast of Miami.

"Cops get excited and take photos when they catch a drug smuggler but they will never be able to confiscate all the drugs. In fact, more of them get through the border than not. I drew the coast of Miami because Florida is the main hub for cocaine in the US. The city of Miami grew because of cocaine," said Raj.

Many Thai people assume that Americans are more interested in art, so the lives of artists in America must be easier. However, to make a living, Raj works at several things including teaching printmaking and drawing. He is also pursuing his MFA at the University of North Carolina.

"I am getting my MFA, so I can potentially teach in a college or elsewhere. Teaching is really fun and helps me talk about my work and teach other people how to express themselves. I think it would be a better world if people knew art and appreciated it. Also, teaching is another way to get people to appreciate art more," he said.

As an Asian-American, Raj admitted that he had an identity crisis when he was young; he was ashamed to be Thai because he wanted to fit in. He eventually figured out some advantages of being different. 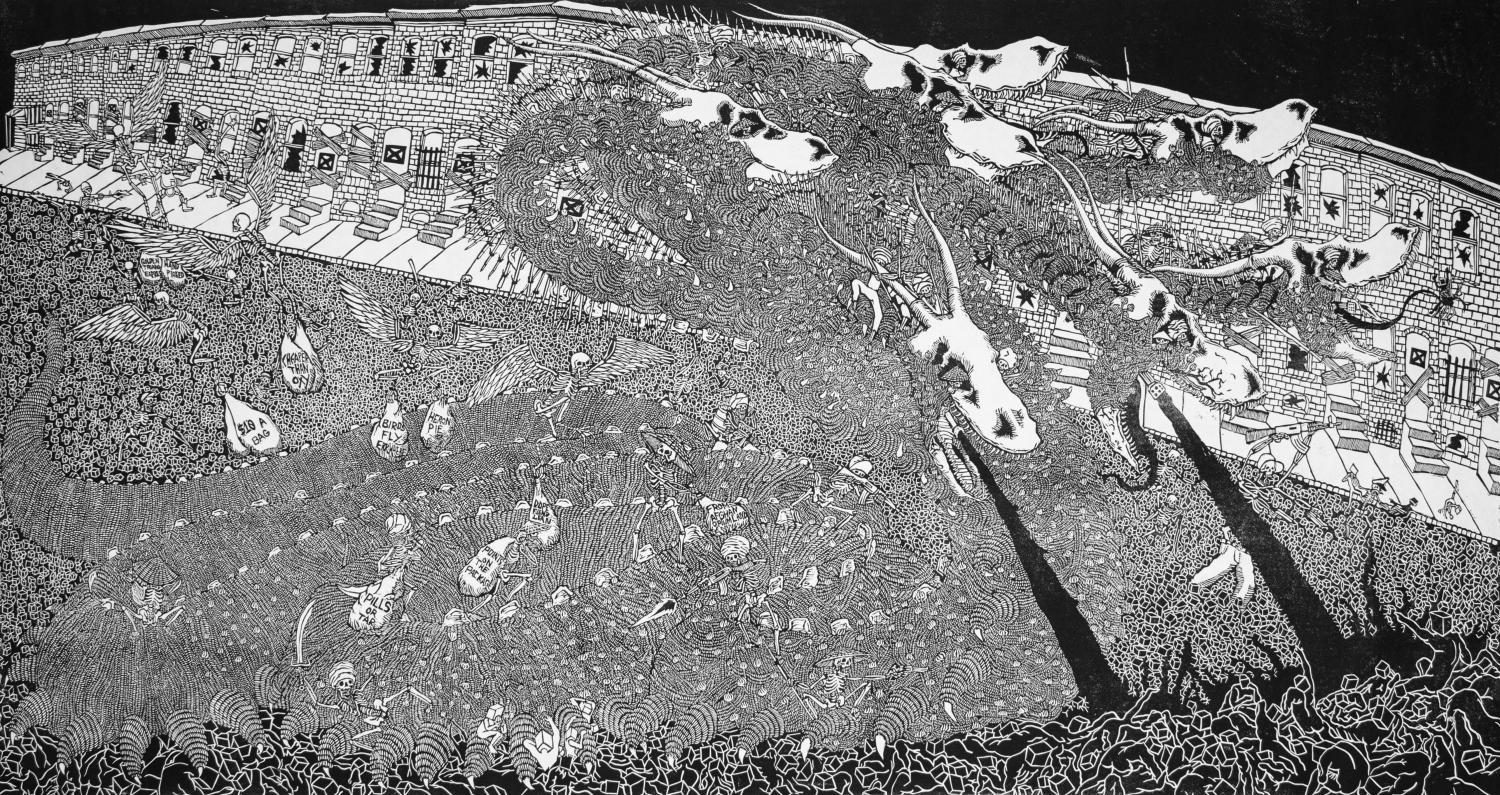 "I am incredibly unique, so I need to embrace that uniqueness. I figured out my voice and how to express myself. My biggest advantage is being able to relate to different stories because of my immigrant experience. I also learned to make my differences my strengths through art," said Raj.

The artist hopes that Thai viewers will enjoy his work and that it will provide another perspective on drug addiction.

"I hope Thai people will appreciate the issue of drugs because Thailand has legalised medical marijuana. I think many countries should re-examine what their war on drug policy is actually achieving. Criminalisation does not solve issues. Instead of making drug addicts criminals, they should get help," concluded Raj.