published : 4 Mar 2021 at 04:00
newspaper section: Life
writer: Suwitcha Chaiyong
Above  Asst Prof Wichase Khonsue, a lecturer from the Department of Biology at Chulalongkorn University, with a Javan rhinoceros skull.

Since the teeth of squirrels and rabbits grow continuously, they must constantly chew in order to maintain proper length.

This is one piece of information among many that visitors will learn at the exhibition titled "Skeleton's Secret" at Chula Museum.

After the museum was closed due to a new surge of Covid-19 infections, Chula Museum is now open again and is ready to welcome visitors to an exhibition displaying 23 skeletons of vertebrates collected by the Department of Biology for the purpose of studying and teaching. Organised in collaboration with the Office of Art and Culture, the Department of Biology at the Faculty of Science and Chulalongkorn University (CU), the exhibition aims to provide information to the public in a different way from lectures.

"We questioned how to make visitors interested in skeletons and later discussed the issue with people at the Office of Art and Culture who are experts in organising exhibitions. 'Skeleton's Secret' is about how science and art meet. Some people may feel scared if they see many skeletons on display, so the exhibition has reduced scary images by using display tricks such as lighting, object positioning and background images of animals. As a result, displays are bright and colourful with easy-to-understand content. Visitors can take photos with skeletons without feeling disgusted," explained a lecturer from Department of Biology at CU, Asst Prof Wichase Khonsue. 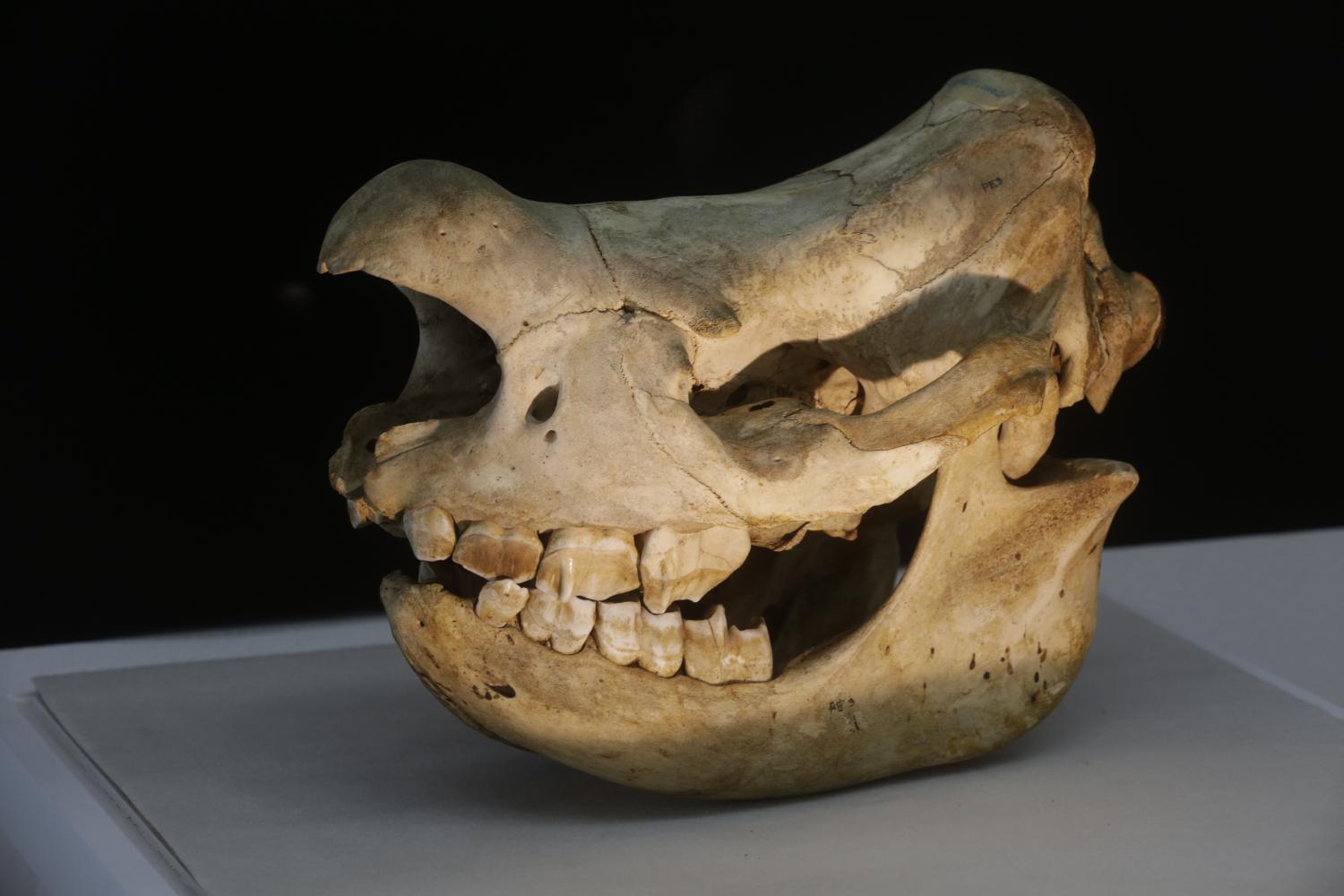 Above  The skull of the Javan rhinoceros is an extremely rare find. (Photos: Pornprom Satrabhaya)

Some visitors may think some skeletons are artificial but Wichase ensures that all are real. Each skeleton has been through a 10-step process of preparation to clean and preserve it. However, no animal was deliberately killed for the exhibition.

"Most of the skeletons were donated by zoos, organisations and private collectors. For example, a crocodile's skeleton came from a crocodile farm and a snake skeleton was donated by a snake farm at the Queen Saovabha Memorial Institute. Meanwhile, the rabbit and frog skeletons came from laboratories which ran experiments on them. We tried to collect animals which had complete skeletons. The oldest skeleton in the exhibition is that of a bird that was collected in 1979. Visitors can differentiate between old and new skeletons by noticing the colour. Old skeletons are yellowish with some decay while new ones are whiter," said the lecturer. 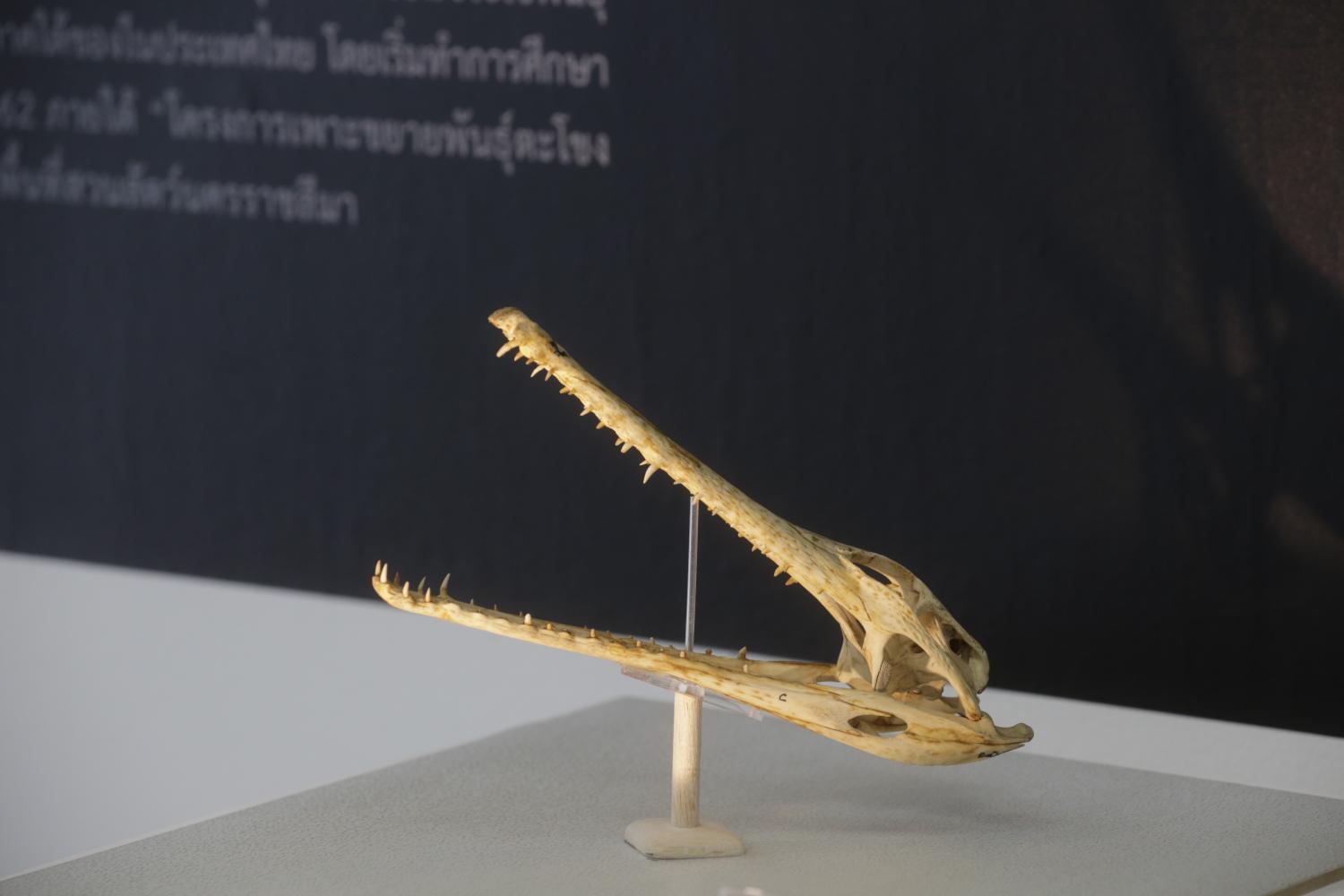 Above  Unlike a crocodile, a false gharial has a long and thin snout.

At "Skeleton's Secret", five types of vertebrates -- fish, amphibian, reptile, avian and mammal -- are on display. Fish were the world's first vertebrates and they have no legs because they use fins and muscles for movement. Fish swim by pushing their muscles against the water. On the other hand, bird bones are hollow with thin and porous structures. They have muscles that can lift their wings to help them fly. Last but not least, mammals consist of several types of animals ranging in size from from small to large. The only mammals which are capable of flying are bats.

Wichase pointed out that some people get confused between amphibians and reptiles. 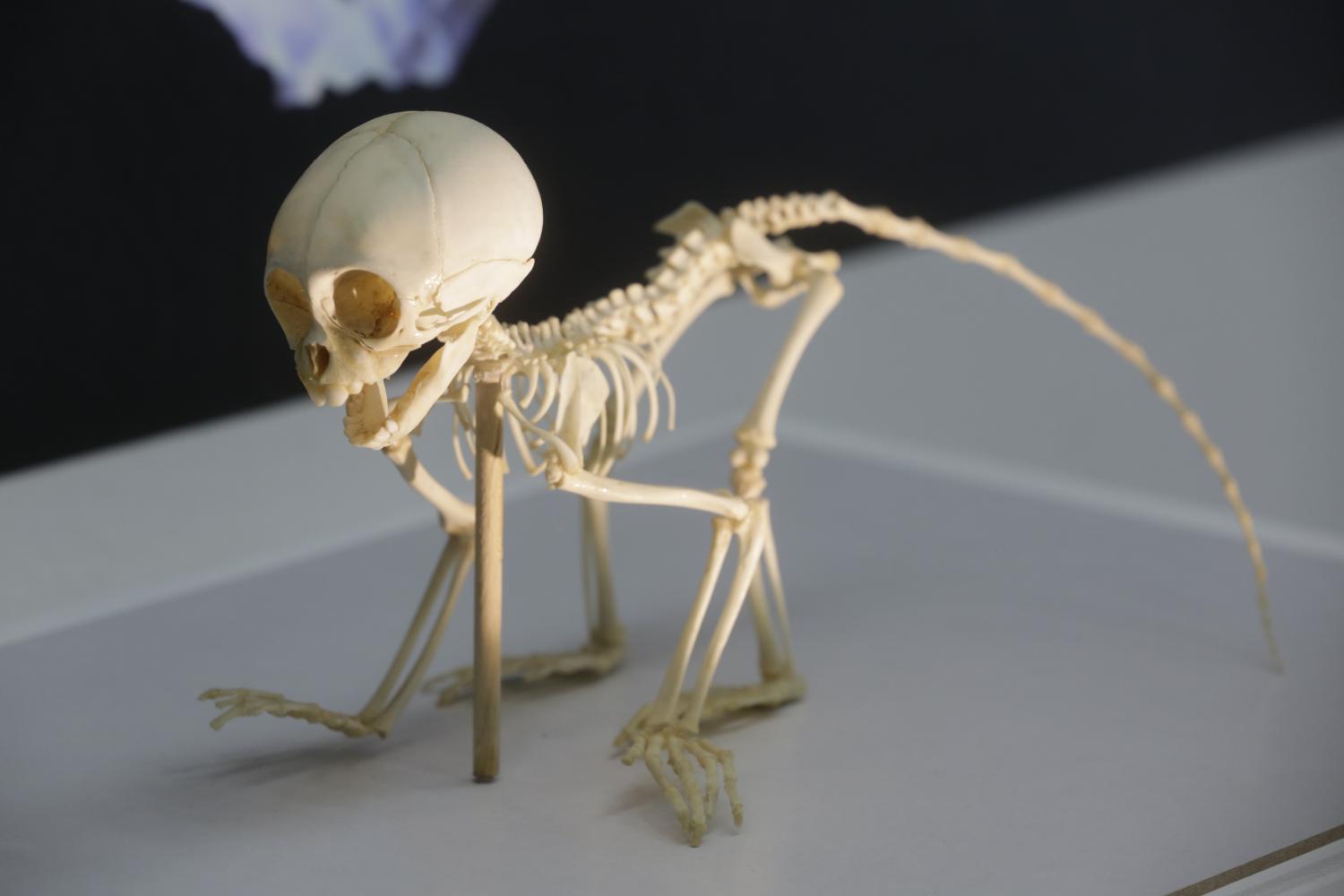 Left  A leaf monkey's tail is about the same length as its body.

A highlight at the exhibition that should not be missed is the skull of the Javan rhinoceros because rhinos in Thailand have been extinct for decades.

"The skull of a rhino is extremely rare to find. This skull was donated from a private collector who did not have time to take care of it. From its teeth, we can tell that this rhino was a juvenile because it did not have adult or permanent teeth. This serves as important evidence to prove the existence of Javan rhinos in Thailand in the past," said Wichase.

Another interesting skeleton is the rare Malayan false gharial, a freshwater crocodile species. It is hard to find because their population has been decreasing. In Thailand, a false gharial has not been seen in any natural habitat for more than a decade. Fortunately, captive false gharials can be seen in Chiang Mai Zoo and Nakhon Ratchasima Zoo. Moreover, skeletons of a cave fruit bat, a leaf monkey and a Malayan snail-eating turtle are also worth seeing.

"The correct position of a bat skeleton is upside down. Even though the bat is a mammal, its bones are more slender than human bones, so its bone weight is light. Also, their wings and membranes between their feet help them fly against the wind," he said. 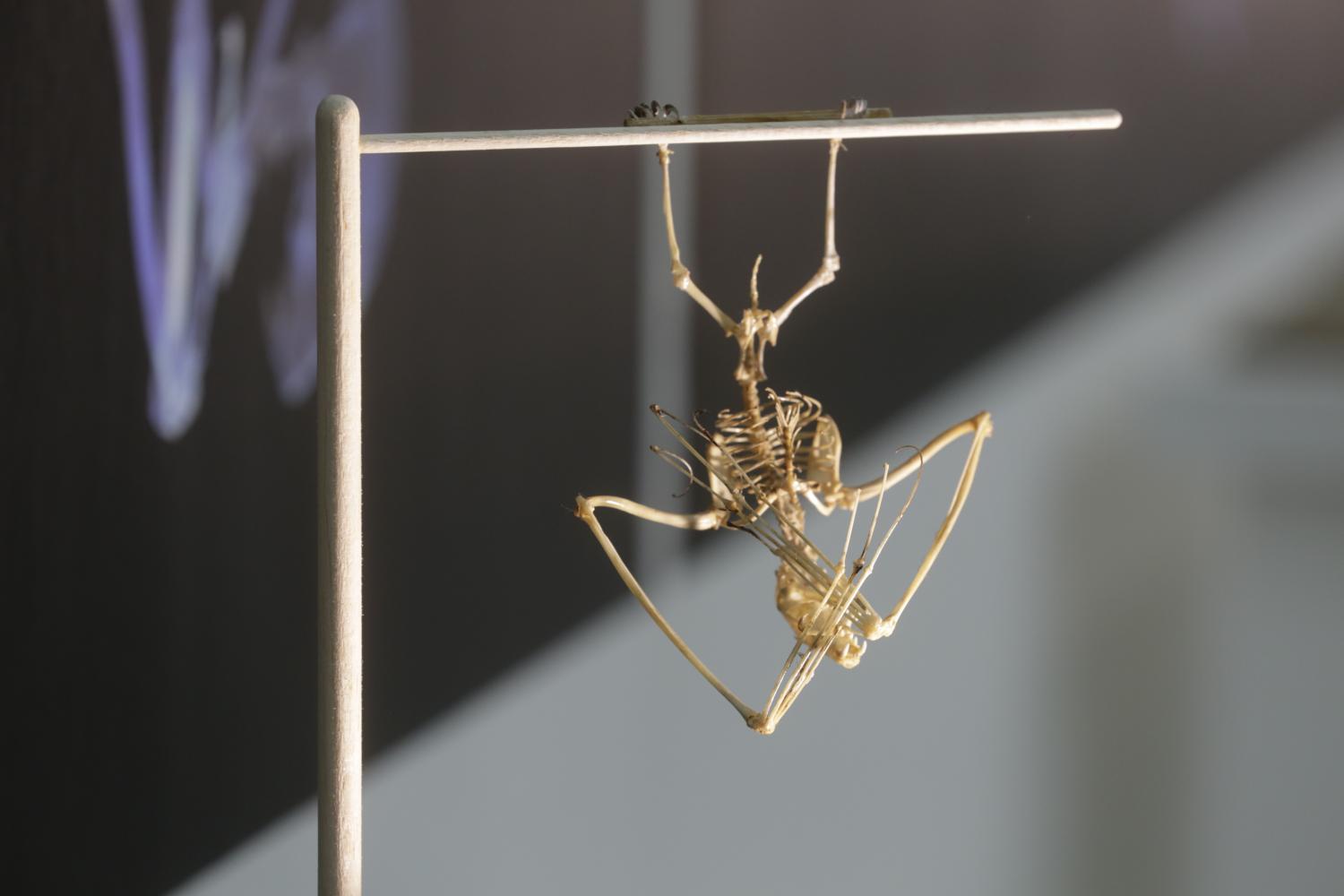 Right  Bats are the only mammals which are capable of flying.

Also, turtles are animals that children really pay attention to. They often question if a turtle can leave its shell but it is impossible because the shell consists its spine and skeleton. Some skeletons at the show were exhibited at the Museum of Natural History in CU before and they were well received by young visitors. Wichase hopes that "Skeleton's Secret" can attract young people to learn outside the classroom. 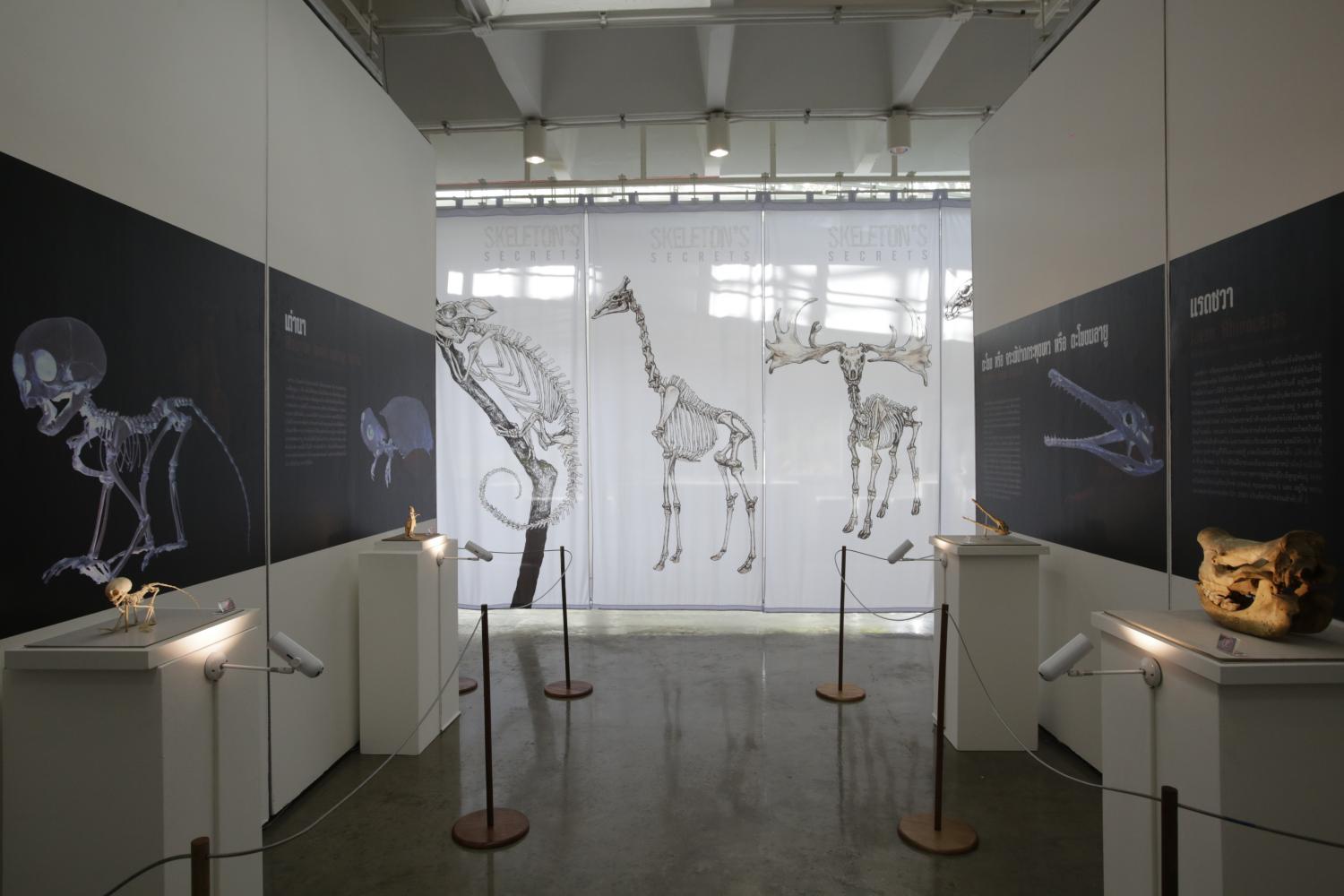 "Our previous exhibition had over 10,000 visitors a year. Our main visitors were students and schools from all over the country. Students from Nan province came all the way to the museum because they wanted to view skeletons.

"I believe that 'Skeleton's Secret' is suitable for people of all ages. It is like a link between family members. When elders come here, they can share with their grandchildren or children about their experiences with animals. For instance, they may have seen a false gharial in the past and tell family members about it. Both adults and children will learn from the exhibition and if they want to see larger skeletons, they can visit the Museum of Natural History which is located at the faculty of science in CU as well," said Wichase. 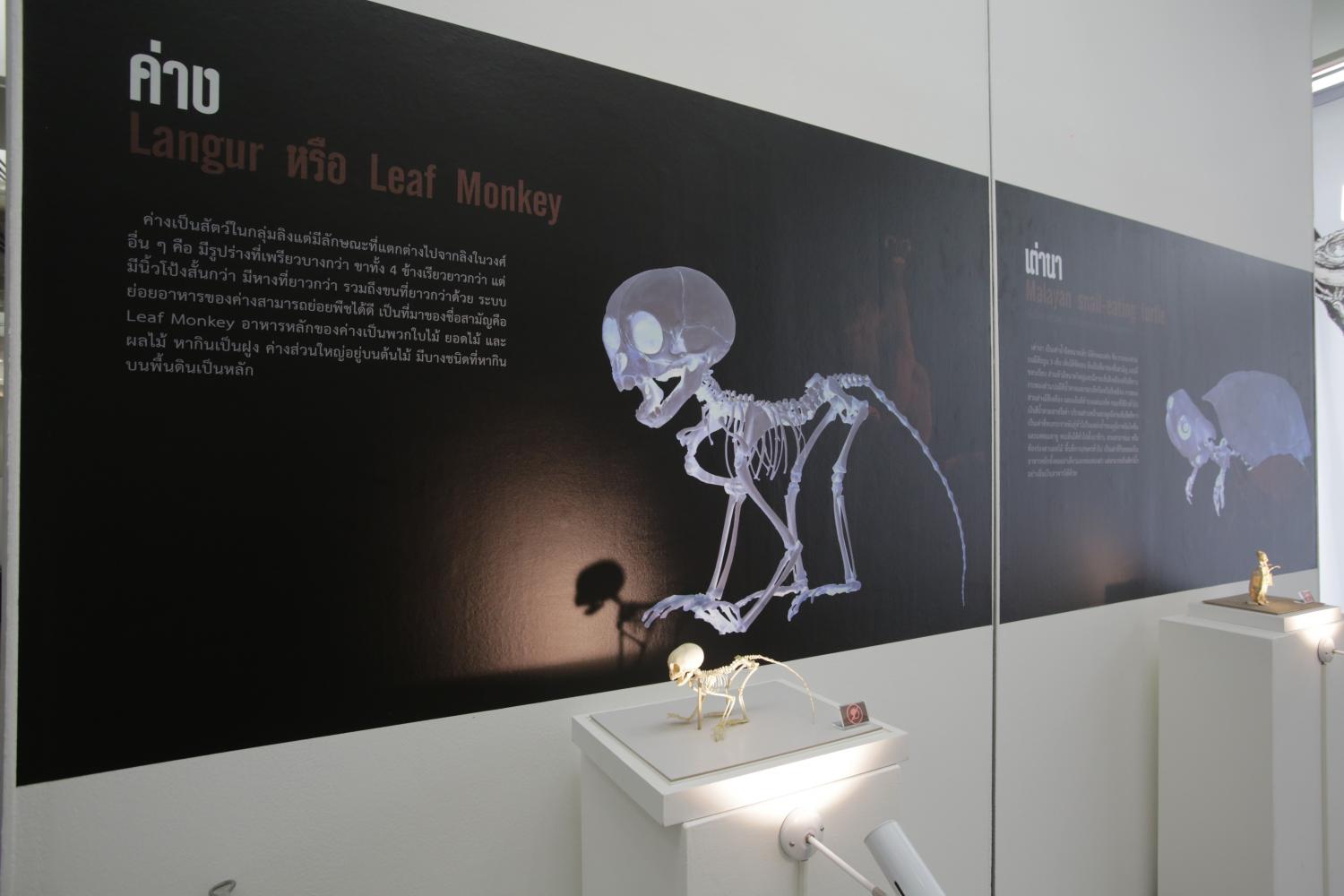 A leaf monkey's tail is about the same length as its body. 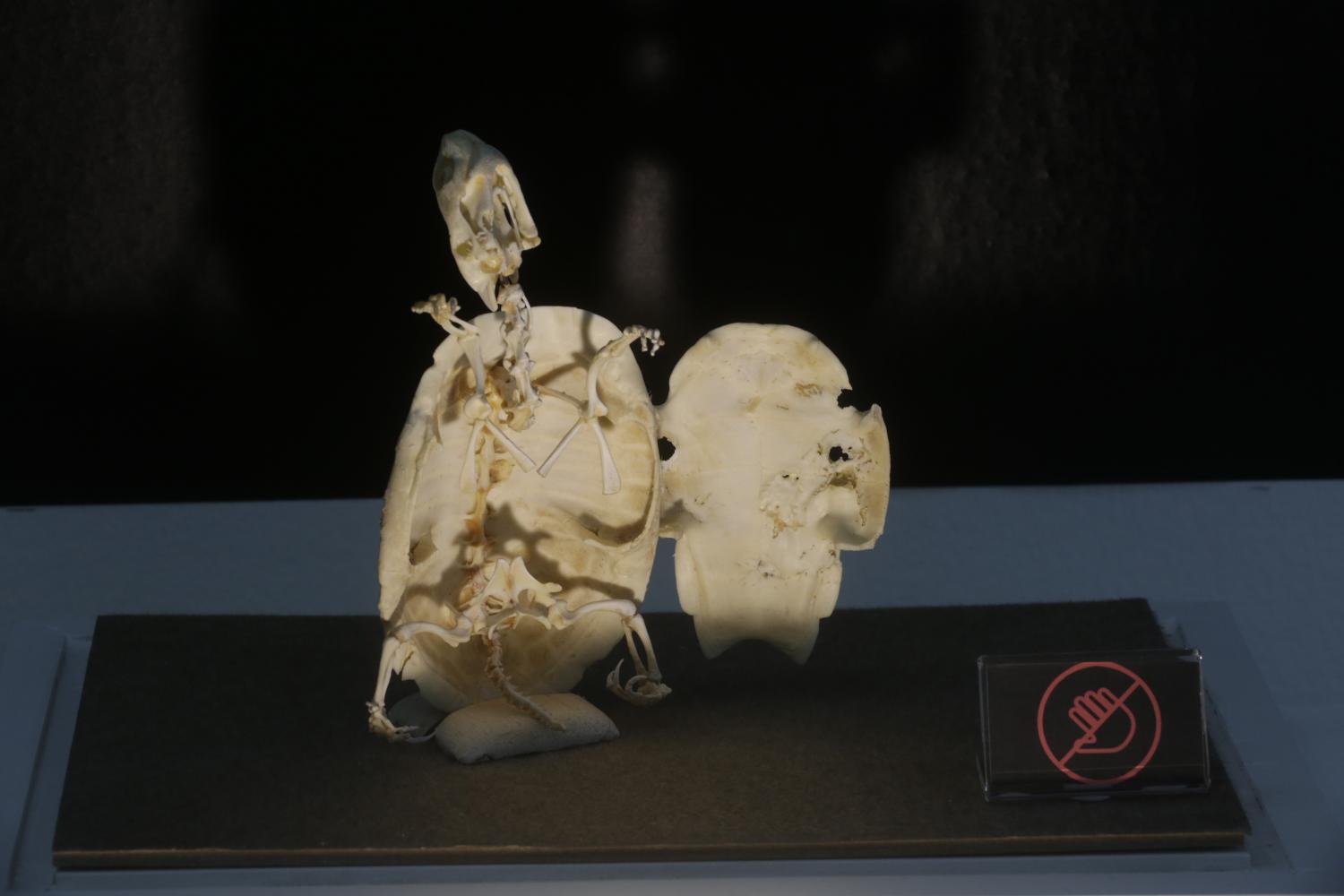 "Skeleton's Secret" runs at Chula Museum until May 5. Admission is free. Visit facebook.com/chulamuseum or call 02-218-3645.