To mark Bun Phawet, The Siam Society is presenting a rare one-day opportunity to view hand-painted banners detailing the story of Vessantara Jataka

To mark the fourth lunar month, this week Buddhist pilgrims around the northeastern region are hosting the annual Bun Phawet festival that includes religious rituals and striking performances to maintain their traditions.

In Bangkok, The Siam Society and Thai Textile Society join the celebration with the exhibition "Pha Phra Ves: Painted Vessantara Jataka Scrolls", which will take place on Saturday at The Siam Society Auditorium to promote local wisdom and the charm of Thai cultural heritage.

On display is a rare selection of five painted scrolls from the private collection of award-winning designer ML Pawinee Sukhasvasti Santisiri, who has operated the design studio and furniture brands Sahacha, Yothaka and Ayodhaya. 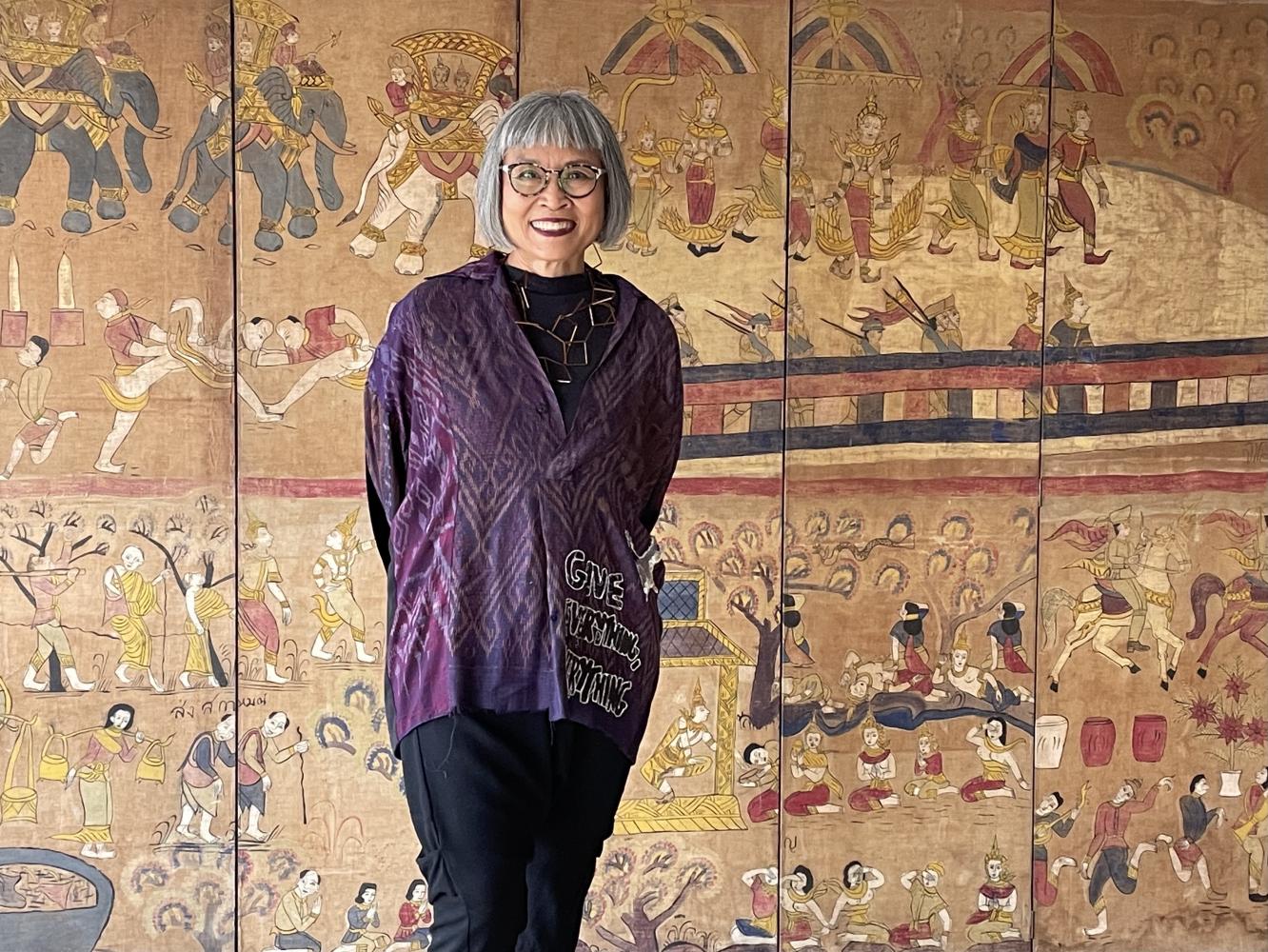 Pawinee started her hobby in 1986 after visiting the Lao refugee camp outlet on Sukhumvit Road and falling in love with the hand-woven textiles. Initially, she bought them to decorate some retail space in her office before expanding her collection to a thousand pieces like tube skirts and breast cloth from Laos, Cambodia and other countries.

But the highlight is a series of more than 20 time-worn Pha Phra Ves scrolls from Laos and Thailand, which were created in paying homage to the Lord Buddha as part of the Bun Phawet ceremony.

"The refugee camp conducted many workshops to develop migrants' skills, and at the same time they sold their old handwoven textiles to earn money. That inspired me to collect traditional textiles. Antique dealers often visited my shop to present their products from the border of Laos and Cambodia and the rare collection of venerable Pha Phra Ves caught my eyes. The scrolls represent beautiful folk art that reflects a way of life and culture," Pawinee explained. 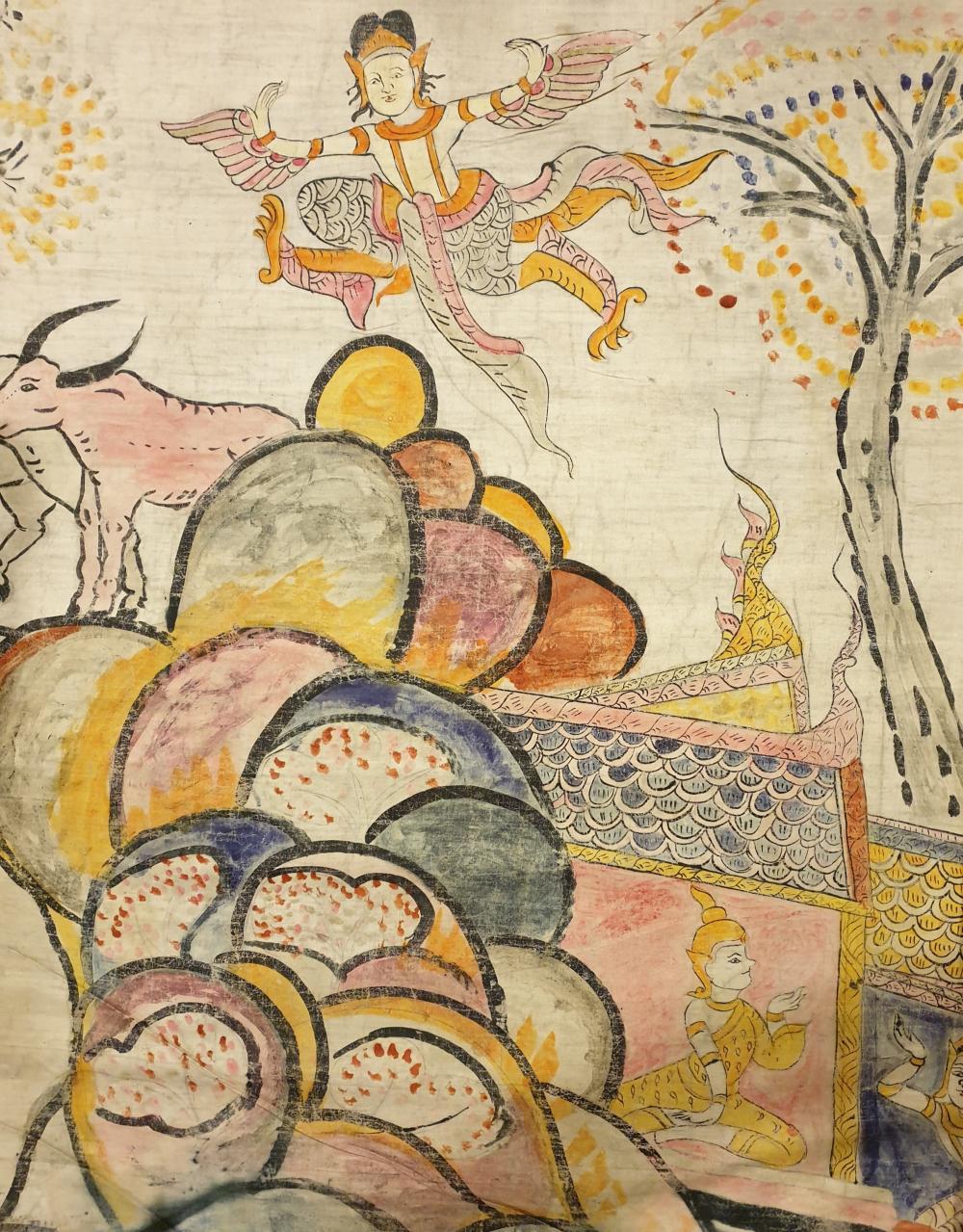 "Many Lao moved to Thailand's northeast region and have managed to maintain their beautiful traditions. To make merit during the Bun Phawet ceremony, they drew the story of Lord Buddha on cloth scrolls rather than on the walls."

The three-day Bun Phawet festival begins by giving alms to monks before a procession of the painted cloth scrolls from the heart of the town to the temple. To adorn a sermon hall, each scroll ranges from 30m to 50m and features 13 episodes of Vessantara Jataka -- the final reincarnation of the Lord Buddha before being born as Prince Siddhartha and reaching enlightenment.

On the last night, the sermon hall is decorated with flowers and plants to create an exotic jungle-like ambience. Villagers believe that if they can listen to a sermon on all 13 episodes of Vessantara Jataka in one night, they will be reborn into the realm of the future Buddha, Maitreya or Phra Sri Ariya Metrai, in the land of eternal happiness. 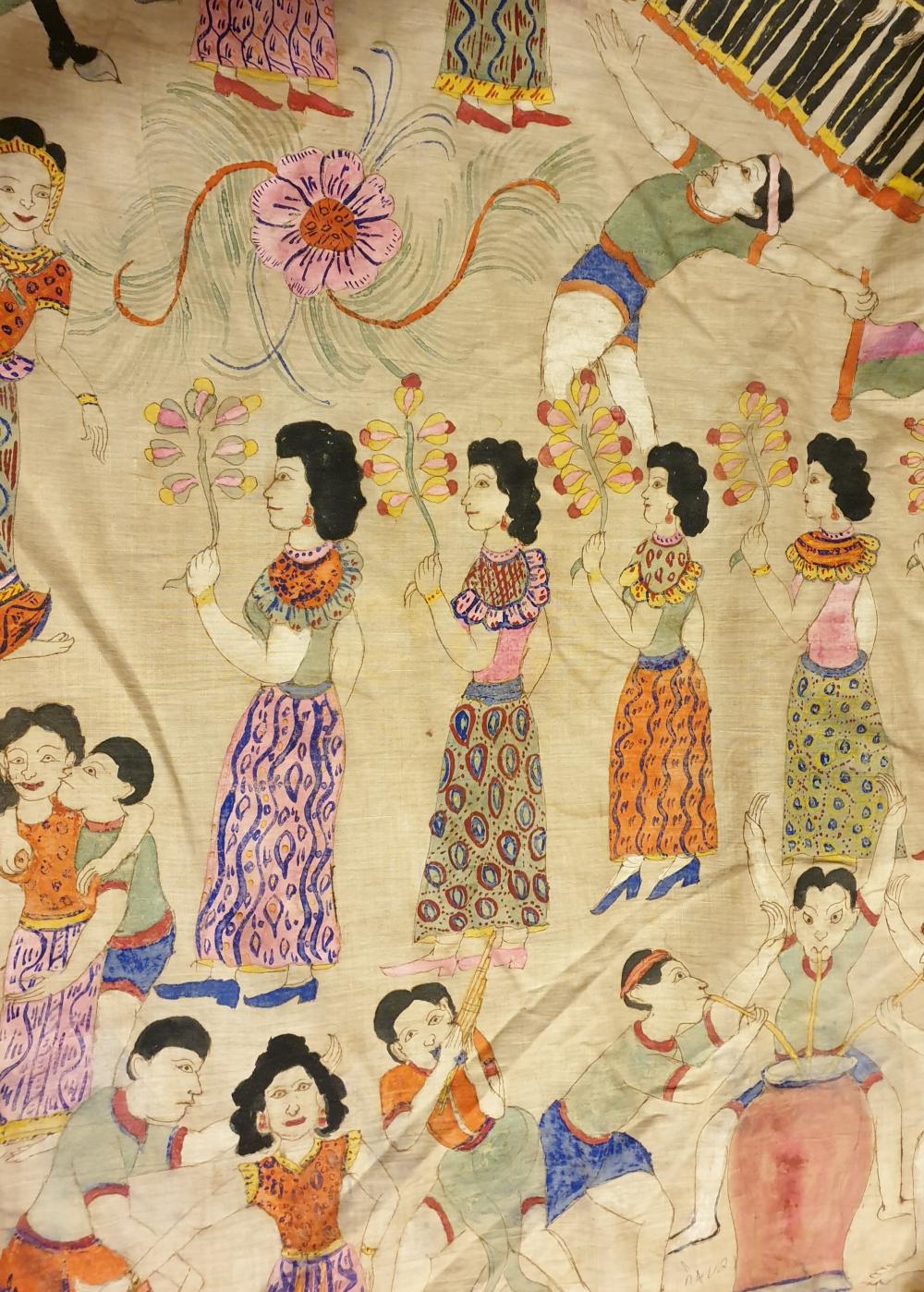 (Photos courtesy of The Siam Society)

"Buddhists in Sri Lanka, India and Southeast Asia have known about Vessantara Jataka. They can find a way to make merit, based on Vessantara Jataka. For example, some villagers in the northern towns of Phrae and Nan have also organised the Bun Phawet ceremony. A procession of the painted Vessantara Jataka scroll is straight out of the scene where Prince Vessantara returned to his town after making his pilgrimage," said Dr Navamintr Vitayakul, council member of The Siam Society Under Royal Patronage.

"Due to the Covid-19 pandemic, we postponed the schedule from last year to this year after we spent a couple years preparing this exhibition. We choose five pieces that still remain complete and will be on view for only a few hours to avoid damage from weather conditions. Following the preventive measures, the number of visitors will be limited to 70 persons per round."

Visitors can learn about the virtue of perfect giving. Using powder colours extracted from local plants, the scrolls depict Prince Vessantara giving away his auspicious white elephant to Bhraman and the different kinds of 700 valued elements before being banished to the forest.

Like being in the legendary Himmapan Forest, some scrolls illustrate several mythological creatures like a group of beautiful kinnaree over the river and the garden of trees bearing girl-like fruits. A group of akylin and tigers served as guardians while Prince Vessantara sat and meditated in the middle of the forest.

"Aged between 60 and 80 years, the scrolls were made with good-quality cotton, which was used to produce daily fashion apparel. All scrolls told the same story but were presented differently in details and in the way of storytelling that showed the creativity of veteran and amateur artists," Pawinee said.

"The paintings came in pastel shades and most depicted the verdant jungle, in which local animals and mythic creatures lived together. This is a good chance for urbanites to admire the beauty of folk art and Isan culture on these old textiles."

The last episode depicts Prince Vessantara achieving the perfection of generosity after giving away his son and daughter to be slaves for greedy Brahman Jujaka as well as giving his wife to the god Indra. Some painted scrolls also told the legend of Phra Malai, who travelled to hell and heaven to educate young generations about dhamma. 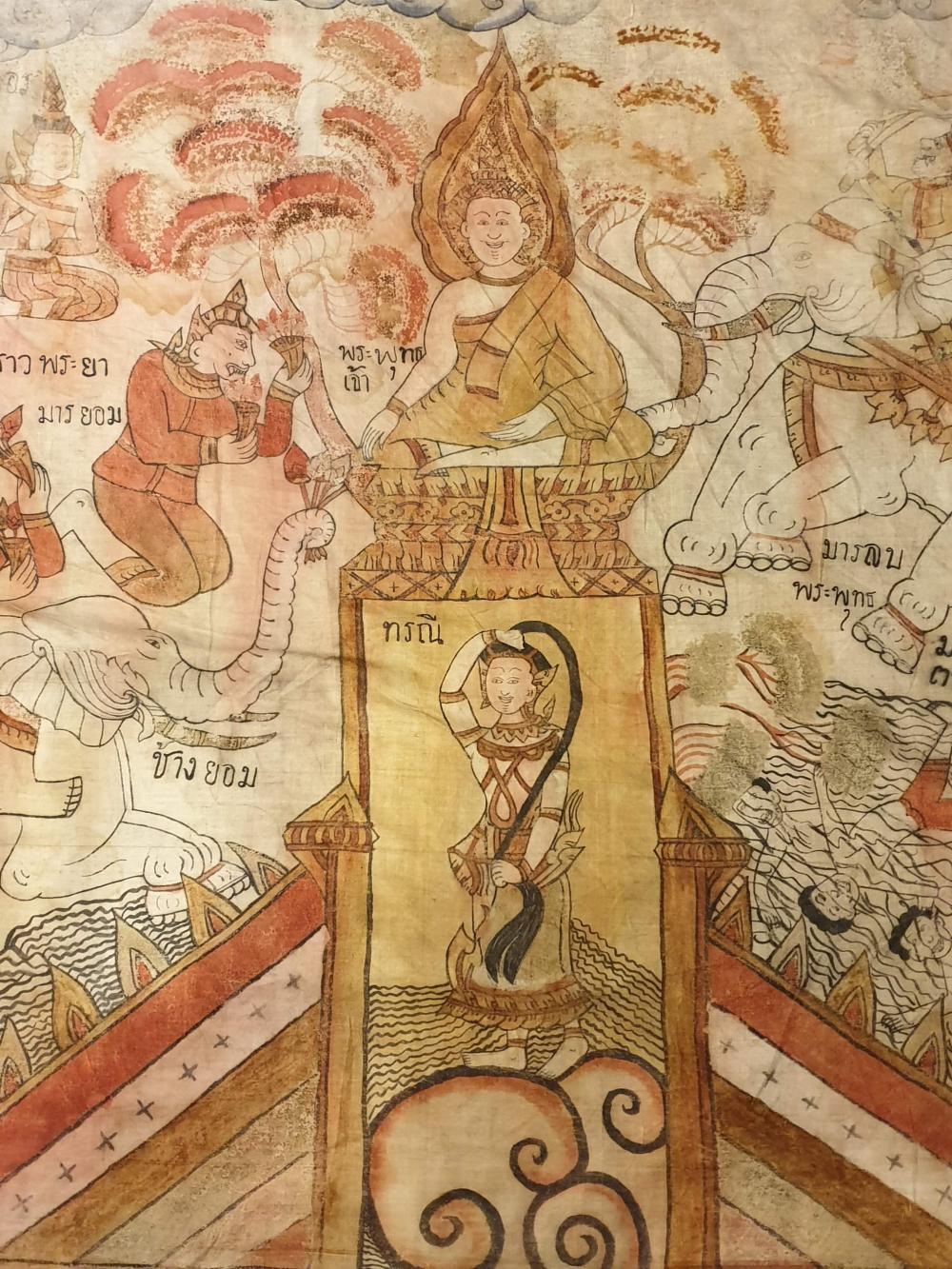 "With free-hand drawing, a sense of humour was put into several scenes. For instance, greedy Brahman Jujaka eats a lot of food until his stomach explodes. He is naked and dead in a funny posture," Pawinee said.

"Artists reflected current situations and fashion through characters. You can see a group of women with permed hair wearing vintage costumes and high heels from the 40s and 60s attending a parade to welcome Prince Vessantara back to the town. This is a value of local design, focusing on nature and surroundings. It's different from what we can see on temple walls in Bangkok. They had realistic drawing, unique colours and good compositions."

The exhibition also offers a video clip featuring the procession of hand-painted Vessantara Jataka scrolls in the Bun Phawet, in which villagers play the roles of Prince Vessantara's son and daughter as well as the greedy Brahman Jujaka.

The exhibition "Pha Phra Ves: Painted Vessantara Jataka Scrolls" is on view at The Siam Society on March 13 from 1.30-4pm. Tickets range from 100 baht for students, 200 baht for members to 400 baht for the general public. Find out more details, call 02-661-6470–3 extension 201 or visit thesiamsociety.org.