Colectiv, a Romanian documentary film nominated for two Oscars, watches in terror as the Romanian healthcare system practically collapses before the camera. The film elicits a series of gasps, as one shocking revelation leads to another, and another: procurement frauds, bureaucratic incompetence, corruption, nepotism, murder, mass bribery, healthcare mafia, maggots crawling on the head of a patient -- a living patient -- and finally, an election whose preposterous results ring too many familiar bells.

Directed by Alexander Nanau, Colectiv (or Collective) is in the race for the Oscars' Best Documentary and Best International Feature (it's worth noting that in the second category, Romania has chosen as its representative a film that shines a spotlight on the country's glaring failure; a sort-of chang-chart movie).

Observant, penetrating and fast-moving, Colectiv builds its narrative of hopeless crusade through the mission of two men: Catalin Tolonton, an investigative journalist for a sports daily in Bucharest (the film doesn't elaborate why a sports publication becomes the valiant whistleblower of a healthcare fiasco), who digs up a mass of skeletons in the bureaucratic closet after 64 people died in a nightclub fire in 2015; the second part of the film focuses on a 30-something health minister, Vlad Voiculescu, nerdish, earnest, a former patients' rights activist appointed to clean up the mess left by his predecessor.

The horrific fire that started it all took place in October 2015 at a club called Colectiv. Phone footage included in the film shows the musicians on stage, after finishing a song, gesture wildly at a fire on the ceiling, shouting, "It's not part of our show!", before pandemonium breaks out. That 26 young people died at the scene was appalling enough, but the scandal broke when 38 more burn patients perished in apparently ill-equipped state hospitals. Deaths that could have been prevented, in the eyes of their families and the press. 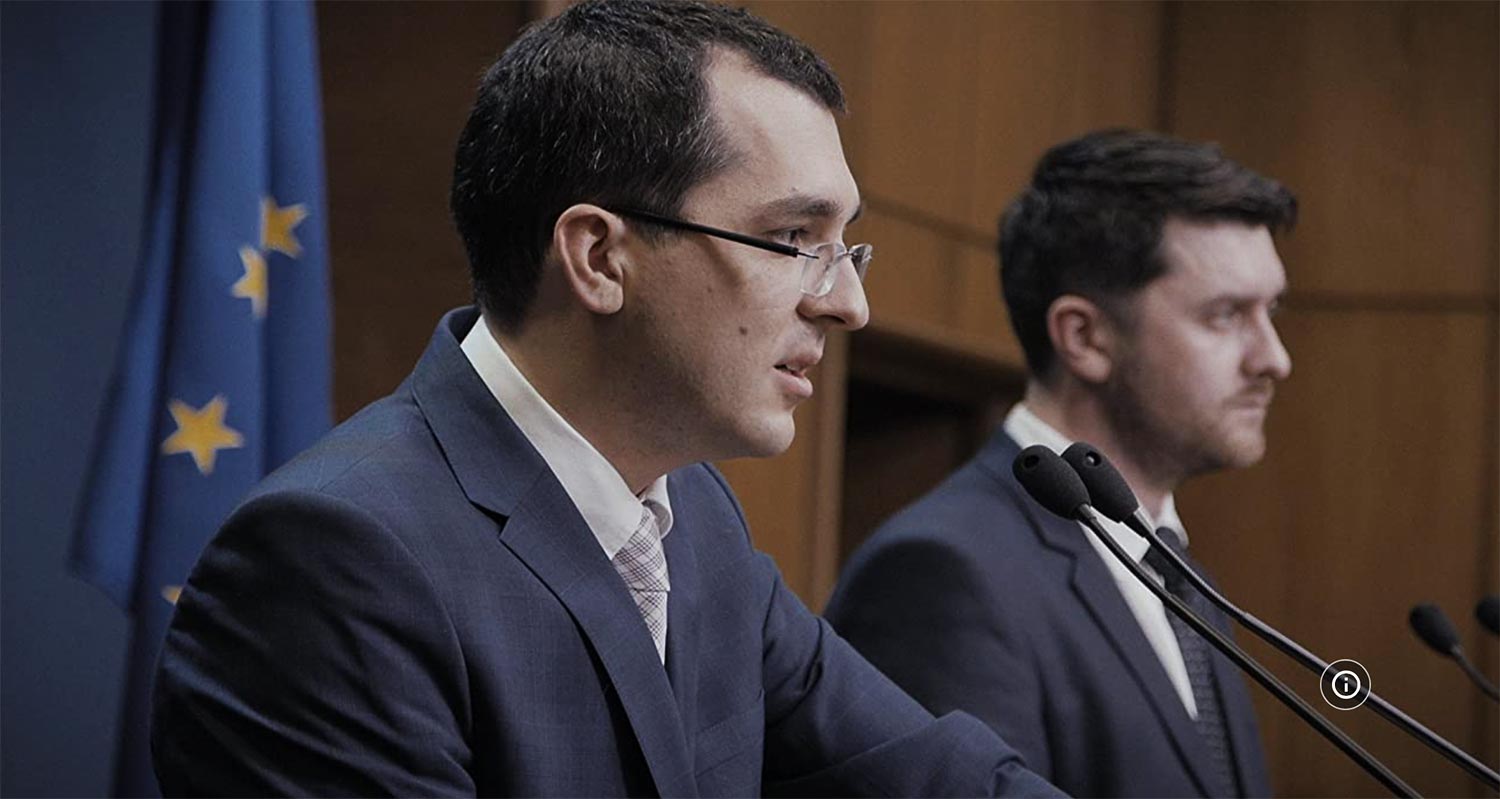 Tolonton, the journalist, tracks down clues, stalks leads and unearths evidence that shows how state hospitals have been buying diluted disinfectants from a supplier, which contributed to the deaths. At a press conference, the health minister swats off accusations and nonchalantly announces that a lab test -- done by the people who bought the disinfectants -- shows everything is up to standard. Here you can make a mental comparison to any other country or any other health minister, according to your imagination.

Colectiv follows Tolonton and his colleagues as they piece together leads and tip-offs before dropping the bombshell scoop that leads to mass street protests against public healthcare policy. Then other fed-up insiders contact the paper to offer information on other corruption cases, unlawful permits, workplace bullying and all sorts of unethical practices, and soon it's clear that the entire system is rotten to the core. No wonder that, at one point, a disillusioned doctor films her own patient with maggots all over his wounds.

Tolonton, gritty and stoic, lets the camera follow him around in his offices and to press briefings, complemented by footage of TV debates in which he appears opposite right-wing commentators. But despite his intrepid journalism, Tolonton isn't portrayed as a hero. Colectiv is steadfast and unrelenting, but its virtue is in how it captures a civil society hard at work to fix its own failings, no matter how haphazard that fixing can be. Watch this film and compare it to, say, the Oscar-winning Spotlight, in which a group of journalists in Boston uncover a child molestation scandal: the American film is solid and well-meaning, but it's still a tale of American heroism that ends in a celebratory mood. Colectiv isn't interested in any of that: the good guys in this film are simply, seriously doing their jobs, and there's no use celebrating a government-rattling scoop or shock resignation of a shady cabinet minister since these small victories, and the film knows as much as we do, don't account for much in the impossible fight against a cynical, impenetrable system.

At least in Romania, the press, or a section of the press, is still an institution people can rely on when the government has failed them (by the way, the right-wing media are out to get Tolonton, the film suggests). Meanwhile, after the previous minister left, the state brings in Voiculescu, a former activist whose heart is set on righting all the wrongs in Romanian public healthcare -- only to find out that there are too many wrongs for him to fix at once. Colectiv shifts its perspective and now hovers around the new health minister as he trudges through red tape, technocratic subterfuge and a hostile press. If the Tolonton narrative shows us how hard it is to crack the system from the outside, the Voiculescu part shows that it's much harder doing the same thing from the inside -- and with much more frustration.

Colectiv ends with scenes during a general election. I'll leave you to find out what happens. On a related note, find time to watch The Death Of Mr. Lazarescu, a three-hour-plus fiction film and a key work from Romanian New Wave filmmaker Cristi Puiu now available on Netflix. That film, a dark comedy and inadvertent companion piece to Colectiv, tells a story of an old man's absurdly disastrous journey through a long, long night in an ambulance to find a hospital that will agree to treat him. In a place with healthcare woes, death can seem like a consolation. On this side of the screen, we also know this, perhaps too well.