published : 28 Apr 2021 at 13:04
newspaper section: Life
writer: Suwitcha Chaiyong
Many artworks at the exhibition display the beauty of a temple structure being repaired.

When artist Raweepon Pradit visited Hat Yai in Songkhla — his hometown — an antique white pagoda with scaffolding around it caught his eyes. After hearing that the pagoda was too old to repair, Raweepon captured some aesthetic angles with his camera. The artist felt that the beauty of the pagoda, which was surrounded by metal poles, was extraordinary so he decided to take photos of it before it degenerated further. A photo of the pagoda was later developed into the artwork Structure, which is part of his latest collection titled “Memo Fascination” on display at Bangkok Art and Culture Centre (BACC) and also online.

“Memo Fascination” consists of 10 pieces that depict local art from several provinces such as the reflection of a kolae boat, naga prow, a shadow play and temple architecture. Each piece was composed of paper mixed with colours, sequins and gold leaf.

“I blended white paper and mixed it with glue. After the paper became solid, it was mixed with colours. I used only primary colours and tried to create as many shades of colour as I could, and there are more than 20 colours in the collection. This idea was inspired by the French post-Impressionist artist Georges Seurat, who created pointillism which is a technique that uses small coloured dots to form an image. Visitors will have to step back while viewing my works so they can see every colour,” explained Raweepon. 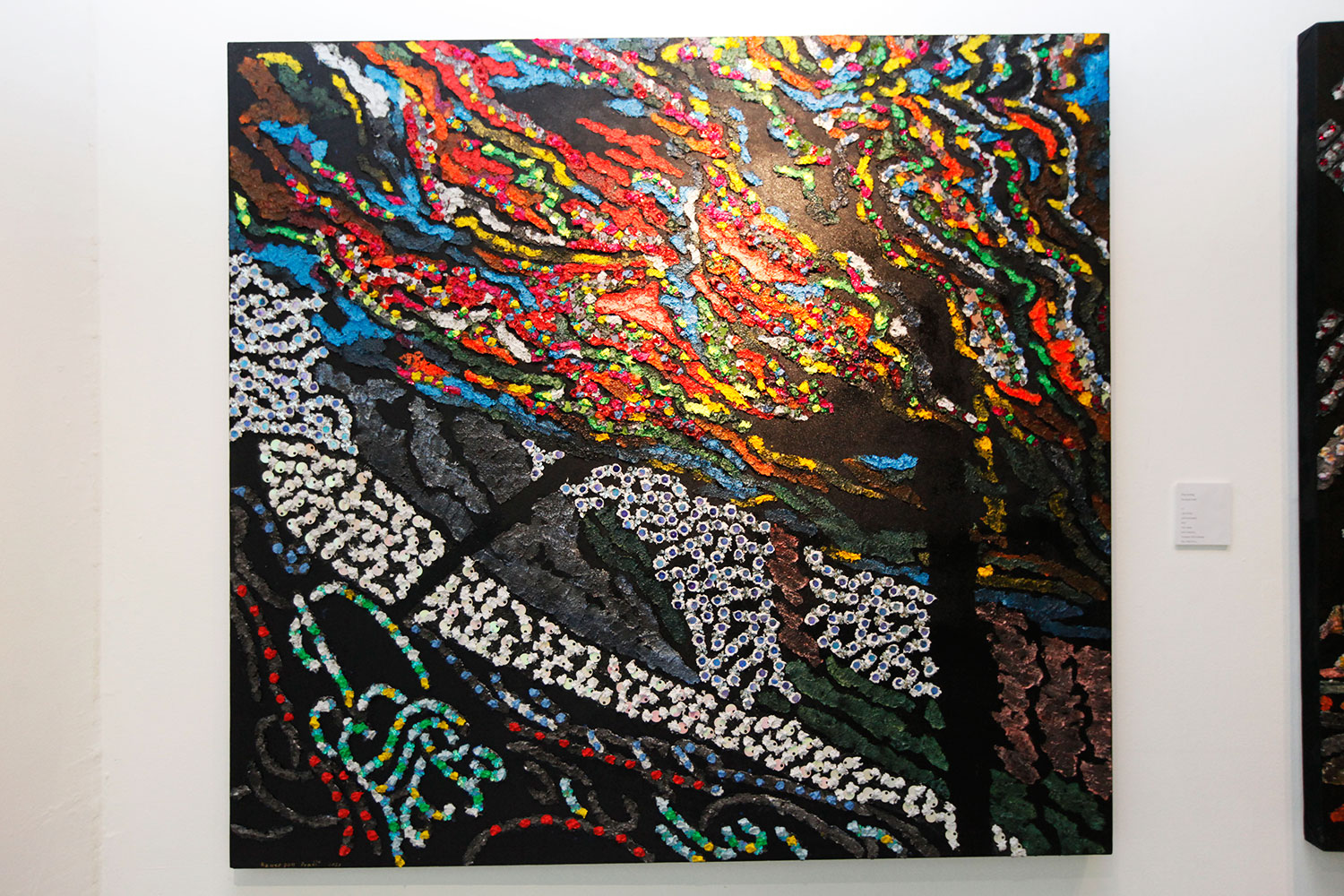 Shade was inspired by reflections of kolae boats. 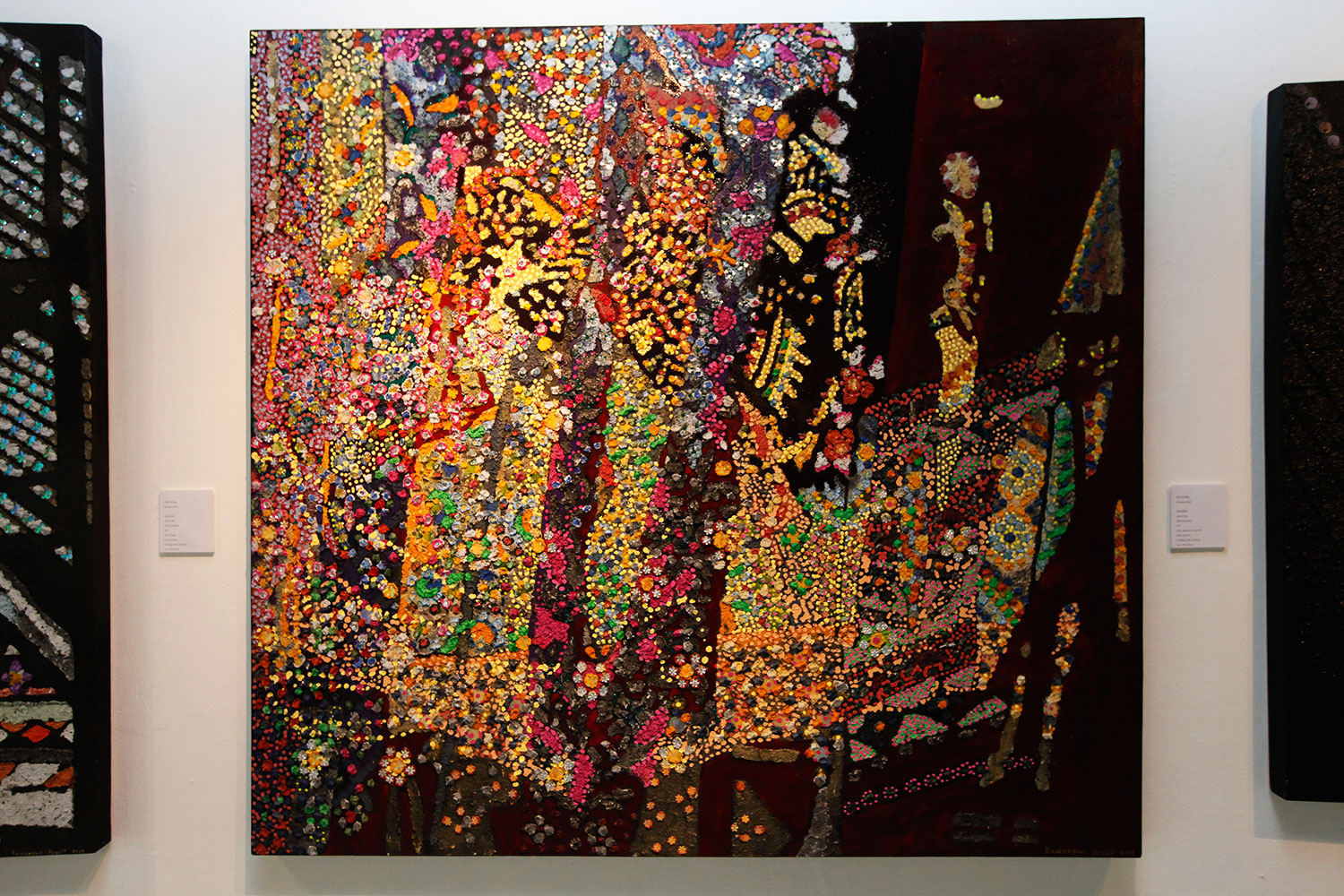 Memories Of Local Life depicts characters in a shadow play. 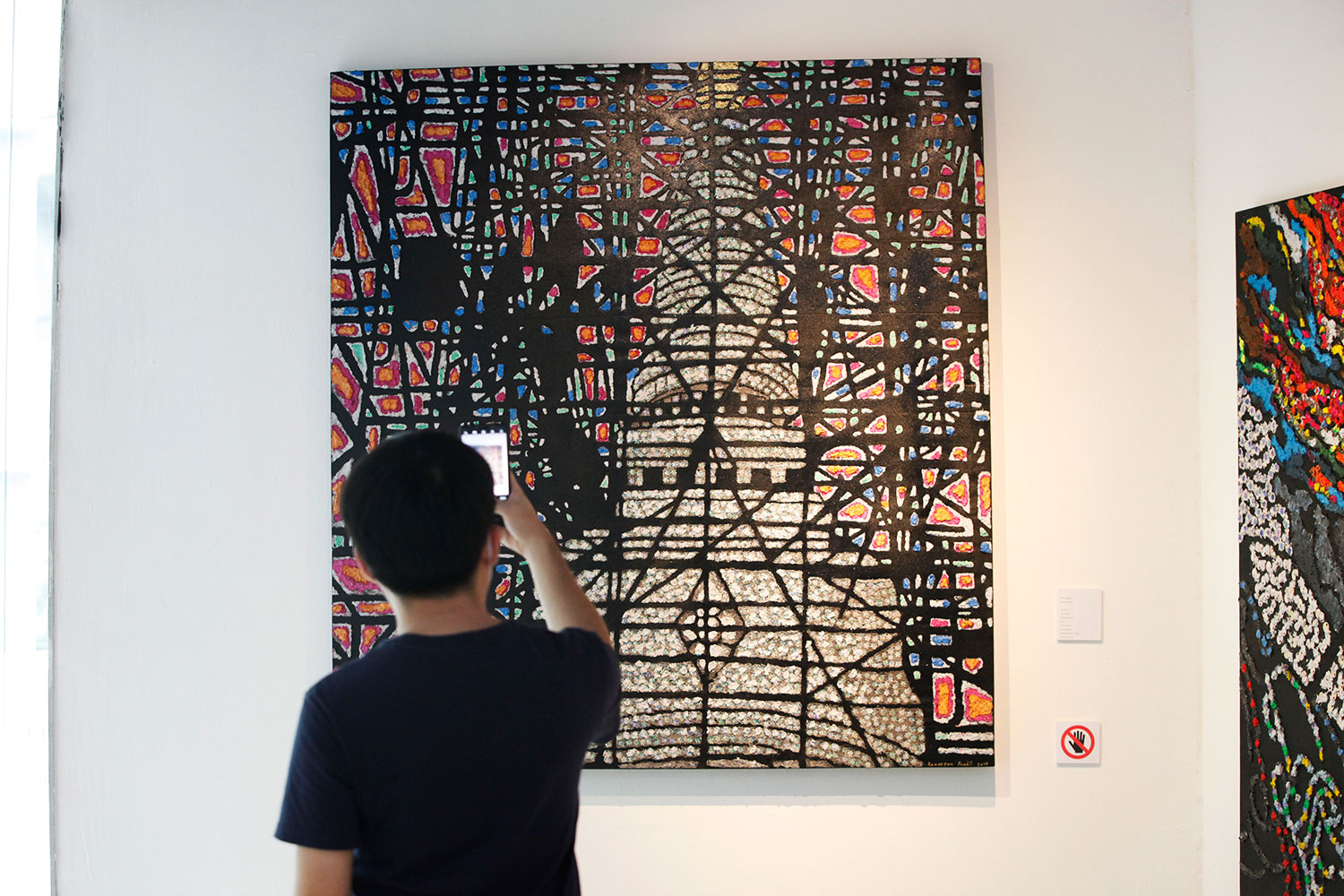 The 38-year-old artist said he wanted to create a collection of local art because he wanted to present Thai roots.

“Thai people rarely look back at their roots and local art. Although ‘Memo Fascination’ was inspired by local art, it is being exhibited in a large metropolitan area. It can especially attract the attention of visitors in the capital since local art cannot be seen there easily. Local art is usually hidden in corners of buildings or corners of villages and not many people pay attention to it,” he said.

Raweepon earned his Master in Fine Arts from Silpakorn University. His interest in Thai art began in a vocational school where he took a short course on the subject.

“I learned the basic of drawing Thai art patterns and how to make Thai pottery. After I took that course, I began to take an interest in many things related to Thai art such as its colours, material and history. When I was an undergraduate student at Silpakorn University, I decided to major in Thai art,” he said.

Due to his outstanding work, Raweepon has received several awards at art competitions including the Excellence Award at the 16th Panasonic Contemporary Painting and Honorable Mention Awards at White Elephant Art Award in 2015 and 2016. 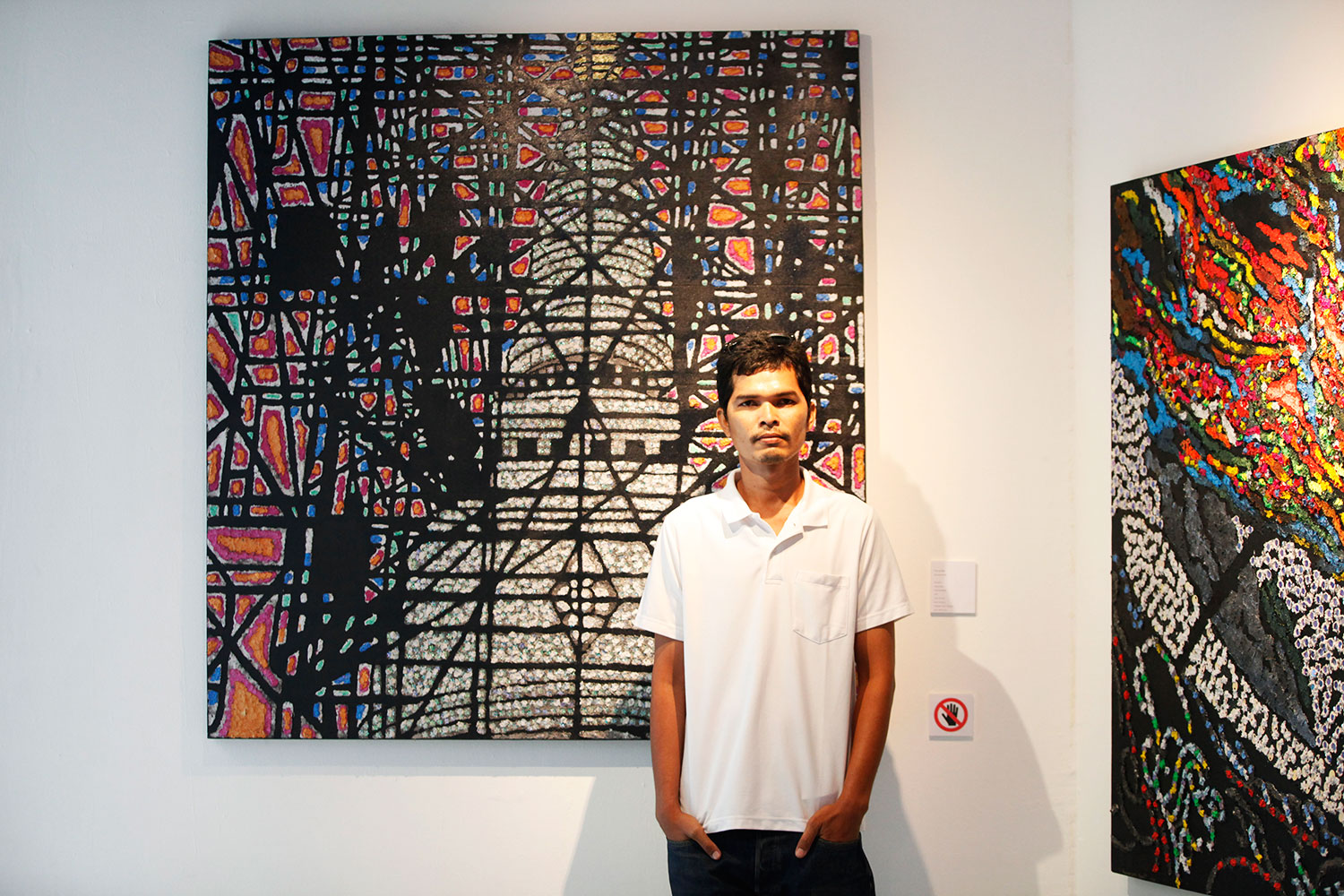 “Participating in competitions gave me the opportunity to prove myself by comparing my work with others as well as trying to find myself. At a competition, an artist has to create artwork that is appropriate to the theme of the contest. However, I prefer to create my own exhibitions because it is a way to present myself,” said Raweepon.

At “Memo Fascination”, artworks such as Sunlight, Glamor (1) and Glamor (2) portray structures in a temple, especially the surrounding scaffolding because Raweepon felt it was captivating.

“I felt that the structure, which is being repaired, is captivating because it is in its original condition. After the structure is completely repaired, its appearance changes and some elaborate details disappear. That’s why I want to keep a record of original appearances,” he said.

As a Songkhla native, Raweepon also wanted to present southern art and culture and depicted them in four artworks — Shade, Memories Of Local Life and two untitled pieces.

“I was inspired to create Shade while I was walking on the beach and saw reflections of kolae boats which are used by fishermen. Each boat is painted with colourful and artistic patterns and its reflection was impressive. Many sequins are included in Shade in order to create a sparkling image. Memories Of Local Life portrays characters in a shadow play and this represents the local lifestyle in the South. I created this piece from a photo that was taken backstage at a theatre. One of the untitled pieces was inspired by mural paintings in a temple in Phatthalung and the idea of the other untitled artwork came from a naga prow in Pattani. It was a wooden cut of a naga prow which has only one head and looked skinnier than usual nagas,” explained Raweepon. 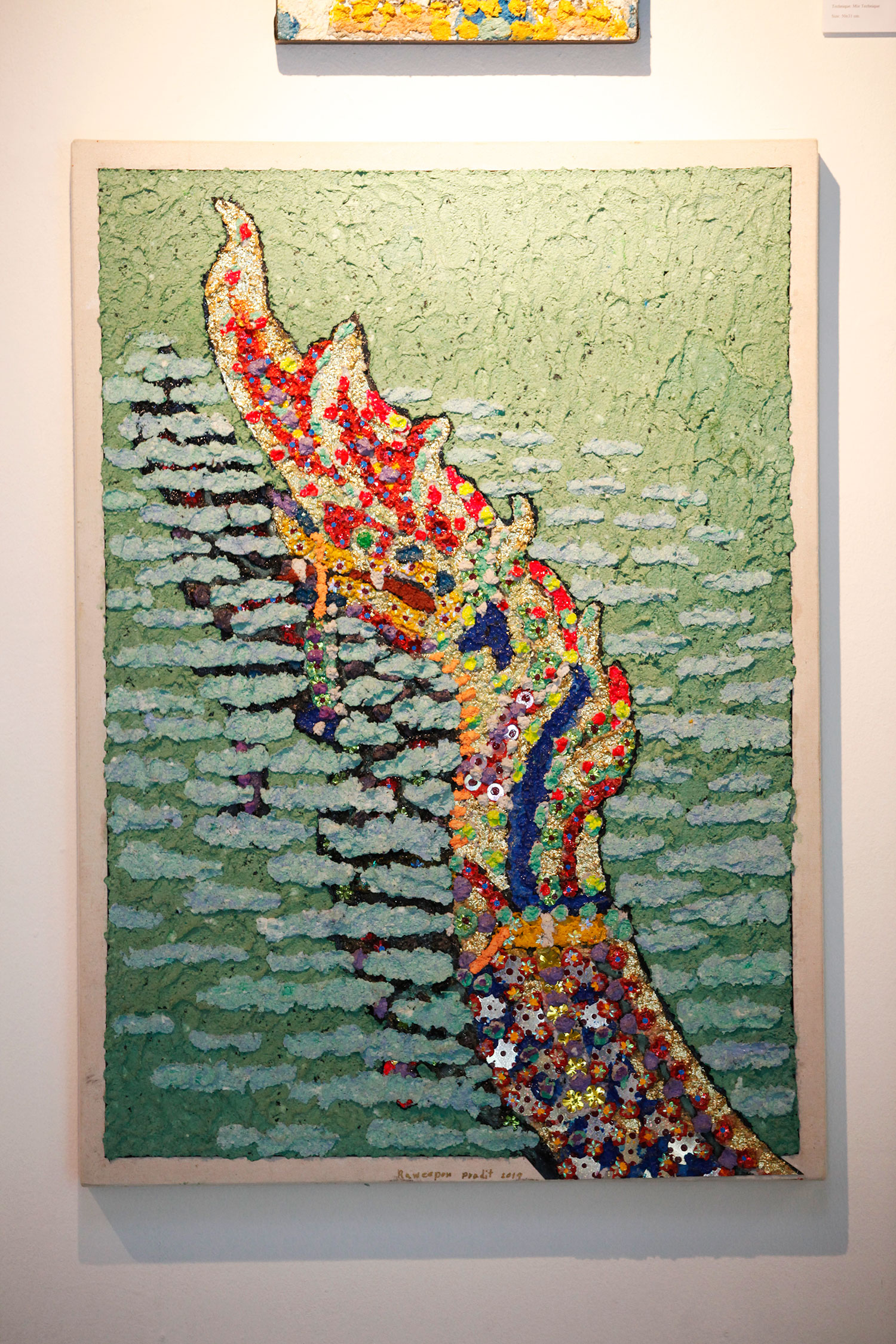 The inspiration for an untitled artwork was a naga prow in Pattani.

After working for more than a decade, Raweepon said that the Thai art scene has been developing.

“The art industry is currently open to creative minds, mediums, materials and presentation. Artists can create their artwork in various forms, however, most collectors who are interested in Thai contemporary art are foreigners because for them, Thai art is different from what they are used to seeing. Some artists might change their style to attract collectors but I am not like that. Collectors who purchase my work receive my unique style because that’s my identity,” he said.

Raweepon admitted that the Covid-19 pandemic has caused him financial difficulty because he cannot meet foreign collectors. Despite tough times, he has never felt discouraged.

“I aim to be a professional artist and will work on art until I reach the end of the road. I have never felt discouraged. Even though I am not rich, I do what I love which not many people can say that,” said Raweepon.

“Memo Fascination” can be viewed online at facebook.com/raweeponpradit. For more information, send a Facebook message.