Rebel without a cause
Life
Arts & Entertainment

Rebel without a cause

She came, she provoked, she burned, she left pools of blood and bits of brain on the school yard while laughing her pretty head off all the way to purgatory. She's Nanno, the demon child with Lolita's freckles and the Joker's face-splitting grin. She's the headline girl from the hit Thai series Girl From Nowhere which, since the May 7 release of its Season 2 on Netflix, has made it to the top-10 chart in many Asian countries and summited the algorithm in Thailand, Vietnam and the Philippines. In China, the series' hashtag was for a time trending on Weibo (Nanno's Thai school uniform also inspires Chinese cosplayers).

Finally, a badge of Netflix honour. We have original Thai content that proves a bona fide hit on the international platform.

The first season of Girl From Nowhere came out in 2018 and established Nanno (Chicha Amatayakul) as an enigmatic Hell's Angel on a vengeful mission. In the eight-episode Season 2, she exhibits her status as an agent provocateur laying waste to Thailand's repressive society. Nanno is a manipulative vixen, a karma cop, a stoic hellraiser who defies rules, exposes hypocritical teachers, metes out violent punishment at authority figures, and, God forbid, even inspires a sort-of revolution among schoolchildren.

We'll get to that later -- to whether this is really a call for revolution or just childish posturing that has absolutely nothing to do with, say, Panasaya "Rung" Sithijirawattnakul's struggle in the hellfire of Thailand's political cynicism, or with the Matthayom 3 pupil in Phuket who was marked for his "disloyal" behaviour, or with the Bad Students campaign and their invigorating street protests of last year. 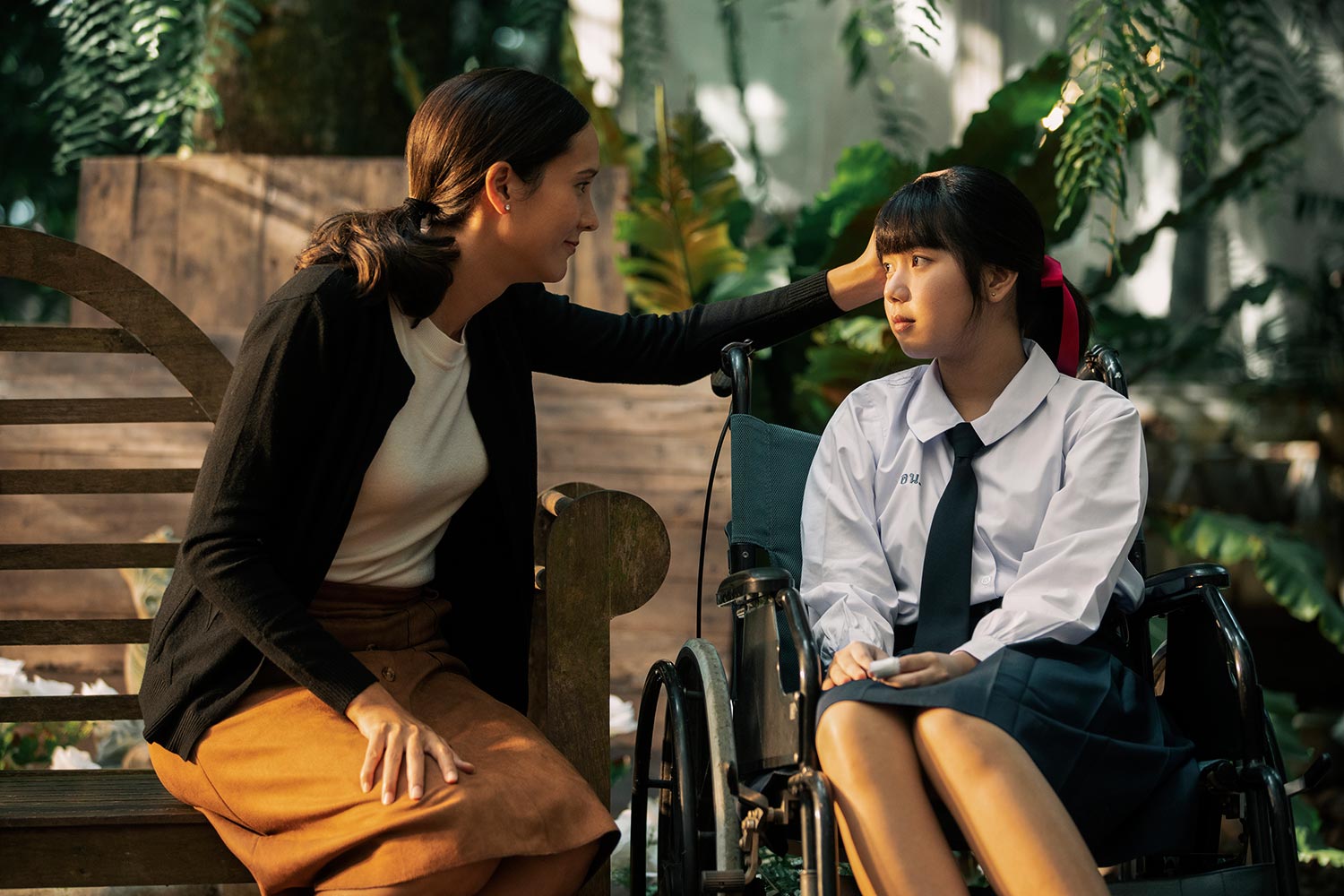 Yarinda Bunnag as Kru Wan and Ploy Sornarin as Junko.

To fans of horror fantasy, Girl From Nowhere inflicts enough blood, wounds and gore on young bodies, in the fashion of extreme Japanese anime, to merit its popularity. In each of the eight episodes (by different directors), the narrative more or less follows the same arc. Nanno appears as a dek mai, new student, at a conservative high school where students are meek and obeying and where she's initially subjected to bullying and threats. Then Nanno reveals her hand, and smilingly confronts and dismantles long-held norms and rules, persecutes teachers, parents, bullies, womanisers and seniors, serving them just desserts while sometimes "empowering" fellow students through scheming and manipulation.

Girl From Nowhere, produced by Jungka and Sour Bangkok, finds a semblance of social relevance from a catalogue of headline woes -- school bullying, sexual harassment, sadistic hazing rituals. Thai viewers will quickly recognise the atmosphere of institutional repression in the setting of schools and classrooms, and in the presence of paternalistic teachers and parents wielding moral prescription and de facto "appropriateness".

In the episode called Minnie And The Four Bodies, the story borrows from the real case of a horrific expressway accident in 2010 that left several dead, though the hi-so perpetrator never served a day in jail. In Sotus, a sexist, dehumanising hazing rite goes horribly wrong and Nanno returns from death for gruesome vengeance. In The Liberation, the students rise up against the tyranny of a school that works more like a prison. In an expansion of the narrative, Season 2 also introduces Yuri (Chanya McClory), an agon to Nanno, a comrade from hell and a rival in this bloodthirsty contest.

It's apparent that Girl From Nowhere has been influenced by Junji Ito's cult manga Tomie (the bangs, the uniform, the Japanese-sounding name) and Joaquin Phoenix's depiction of the Joker -- the lipstick-grin being an homage visible from miles away. But do the similarities stop there? Right there on the skin and surface?

Usually in a story about vigilantes, the torturer began as the tortured; that's what makes their inner conflict interesting. That's why their violent brand of justice feels squeamish but deserving. There's no question that Girl From Nowhere delivers a satisfying dose of revenge fantasy, but it's a hollow revenge. At times it feels gratuitous and show-offish, because Nanno exists in a void (a void, not hell), and her campaign of "rebellion" has that very word neatly framed in the quotation marks. It's an exhibition of rebellion -- in the title sequence Nanno is shown in a school uniform with the Thai word kabot, or rebel -- but not its spirit, not its ideology, not its cruel ramifications, and not with the plaguing self-doubt that torments all true revolutionaries.

It would be unfair to expect the series to show a political bone or to shatter the glass ceiling the same way we saw rebellious Thai youths do last year -- this is entertainment, this is our weekend binge-watching that carries no consequences, what should we expect? But it's disappointing to see Nanno, pitched by the story as an avatar of accumulated teen angst and bottled-up fury, pursue her foes into nothingness. It's even more disturbing seeing her method, her dictatorial streak, her corruption of naive souls -- and how she takes pride in that. A few times, it looks like Girl From Nowhere tries to push towards anarchy, for a total collapse of the structure -- again, like the Joker -- but the series doesn't have the guts to go there either (that would take huge guts).

So, then, the void, the middle-of-nowhere, purgatory. In the year following the upheaval of Bad Students and Panasaya's ordeals, when Thai youths rose up against what they perceive as injustice and had to pay a dear price, when they have no supernatural power to rescue them from jail or dubious criminal charges, Girl From Nowhere looks like child's play.

And yet this is a hit, the "talk of the town", not just in Thailand but also in many other countries, meaning the series has maybe tapped into the zeitgeist of young global citizens fed up with status quo and the ruins left by previous generations. Nanno has come and conquered, demented laughter echoing in the hallway of a burnt school. In our age of uncertainty, what many people find most comforting is to laugh along.