Emerging from a year of illness and isolation
Life
Arts & Entertainment

Emerging from a year of illness and isolation

In a quiet and gloomy world, a girl walks alone on empty and winding roads. The girl is a character in the paintings Alone1 and Alone2 from the Covid-19 pandemic-inspired collection "Linetopia" by Apiwat Bunler. Periods of stay-at-home and self-isolation had a strong impact on independent artist Apiwat, who also bartends in his own bar, Barley, where he meets many people.

"The atmosphere during the pandemic is depressing. I feel lonely staying home by myself. The girl in Alone1 and Alone2 represents a lonesome state of mind with dark colours. The painting In An Uncertain Situation portrays my own character dragged by a chariot, which was inspired by a scene in the movie Troy, when Achilles tied and dragged Hector's corpse with his chariot. The dragging conveys that our own thoughts can hurt us. Since I am used to being around people most of the time, I did not like the stay-at-home period at all. It makes me feel depressed. I stay by myself and talk to myself like a crazy person," said Apiwat.

Apiwat's first painting in this collection, Persistent Problems, was part of his master's degree thesis at King Mongkut's Institute of Technology Ladkrabang in 2018. The painting was inspired by his frustration commuting in Bangkok's heavy traffic caused by ineffective infrastructure and public transportation systems. Due to its sharp lines, richness in details and relatable messages, Persistent Problems was honoured with the UOB Thailand Painting of the Year award. 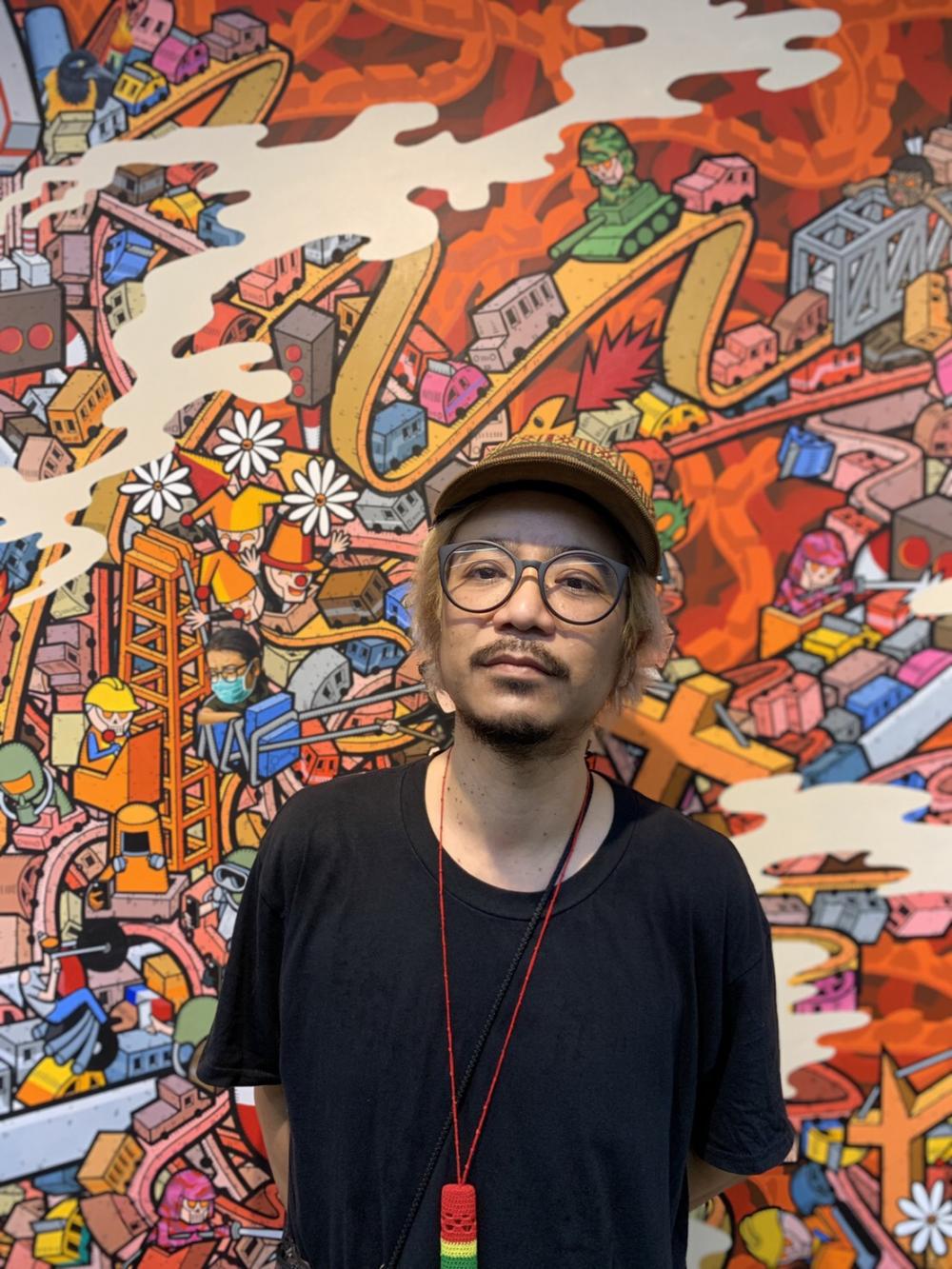 Apiwat Bunler and The Chaotic Of Current Society 4.

"Everything in the painting was from my personal experiences before the pandemic. I wasted too much time driving around the city. When I went out to buy things for my bar, I was sometimes stuck at the red light for half-an-hour just to make a u-turn. I felt uncomfortable, frustrated and tired with this chaotic city. My place is also located on a street, so I am always disturbed by the noisy and busy street. I drew Persistent Problems in 2018 and things still have not changed. In my paintings, I always add messages that are related to an ineffective state administration that I am always questioning," said Apiwat.

Before winning the UOB award, Apiwat won several other awards including the Excellent Award at the Panasonic Contemporary Painting Competition in 2018 and 2020. The artist said he participated in painting competitions because he wanted to receive feedback from viewers.

"When I work on a painting, I don't have anyone to give me advice. I would wonder if my work was on the right track. At competitions, judges, my friends and other people in the art industry see my work and give me feedback. Awards are unintended byproducts. However, at this point, I do not want to participate in any competition. I think I had better follow my own thoughts and ideas," he said.

After he won the UOB competition, Apiwat had an opportunity to display his painting at the UOB Art Gallery in Singapore.

"I felt that art had no boundaries there. There was no right or wrong, which is different from Thailand's art industry. At the event, other countries valued their own artworks and their exhibitions were spectacular. I was impressed with artworks from Indonesia the most because their styles and contents was diverse," explained Apiwat.

In order to survive, Apiwat splits his time as a painter and bartender. He paints at the back of his own bar.

"Working on art is my desire, but it is not enough to live on. Hence, I needed another job to provide for my daily expenditures. Since I work at a bar, I have to change the way I work on my paintings to fit my bartending job. In the past, I painted with oil, but it required much concentration and time, which I did not have the luxury of since I was responsible for making cocktails at the bar. When customers order a cocktail, I had to leave my painting to serve them. So, I later changed to use acrylic paint, which dries quickly. I also drew cartoon characters because I can finish them very fast," said Apiwat.

Apiwat explained that he titled the collection "Linetopia" because it is his own world where lines are the main elements. In "Linetopia", paintings can be divided into two styles. Eight paintings created between 2018 to 2020 were related to Bangkok's chaotic traffic while five paintings painted from 2021 portray isolated lives during the pandemic. The eight paintings from 2018 to 2020 feature many characters, including his own.

"I tried to record what happened in each period. My character wore a mask in the painting In The Midst Of A Storm, due to my concern of PM2.5. I drew Japanese superhero Masked Rider Amazon with his head on fire in order to refer to the Amazon rainforest wildfires. In Lung, I painted China's President Xi Jinping and former US president Donald Trump because I wanted to make a record of their trade war," he said. 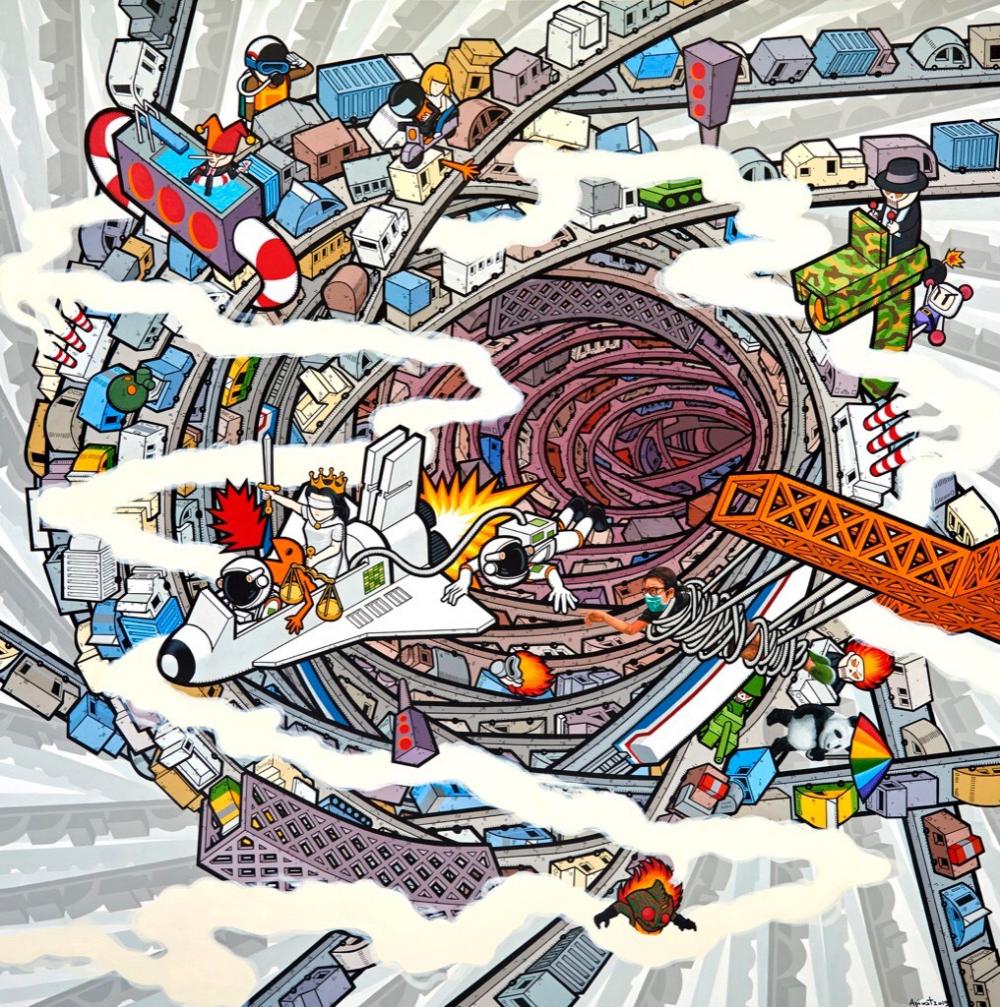 In The Midst of A Storm was created due to artist's concern about unhealthy PM2.5 levels.

In order to depict isolation during the pandemic, paintings created in 2021 featured a single person, or a small number of spaced out characters. All the characters travelled on empty, messy and winding roads.

"The formats of the lines in these paintings were from messy and frizzy balls of yarn or string that encourage people to think about how to untangle them," he said.

Yellow Submarine and A Cat differ from others in the collection. The artist said he painted Yellow Submarine last year to support healthcare workers who have worked tirelessly during the pandemic.

"In the painting, underwater represents an uncontrolled situation. Healthcare workers on the yellow submarine try to help a diver who doesn't have an oxygen tank get above the water. The submarine also criticises the government who were negotiating the purchase of submarines at that time. The other painting, A Cat, was painted by my former girlfriend Paowarin Kamolnawin. I added her painting to the collection because it was the last time we collaborated together," said Apiwat.

Holding the exhibition at this difficult period is not easy, but the artist does not have much expectations for audience feedback.

"As an artist, I work on art because I want to exhibit my work. That's all I want to do," said Apiwat.

"Linetopia" runs at Kalwit Studio & Gallery, Ruamrudee 2, Phloenchit Road, until June 20. Admission is free. Due to the Covid-19 pandemic, the exhibition is open by appointment only. View the exhibition online at oncyber.io/kalwitgallery and facebook.com/kalwitgallery. 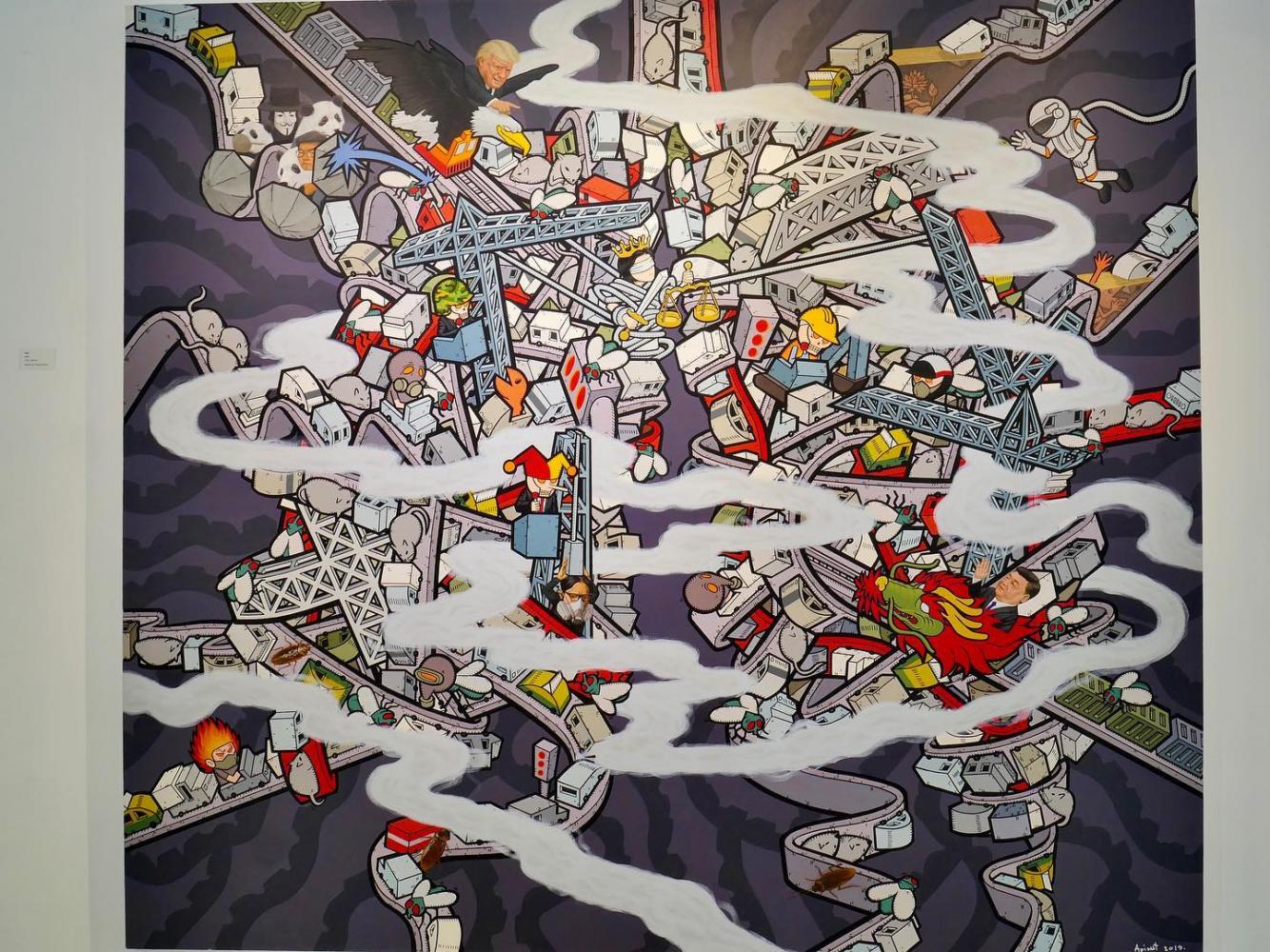 The characters of the China President, Xi Jinping and the former US President, Donald Trump appear in the painting, Lung. Kalwit Studio & Gallery