SEOUL: South Korea's youngest MP apologised Thursday after she provoked fury among BTS fans by using pictures of tattooed singer Jungkook to promote her campaign to liberalise the country's restrictive laws on inking. 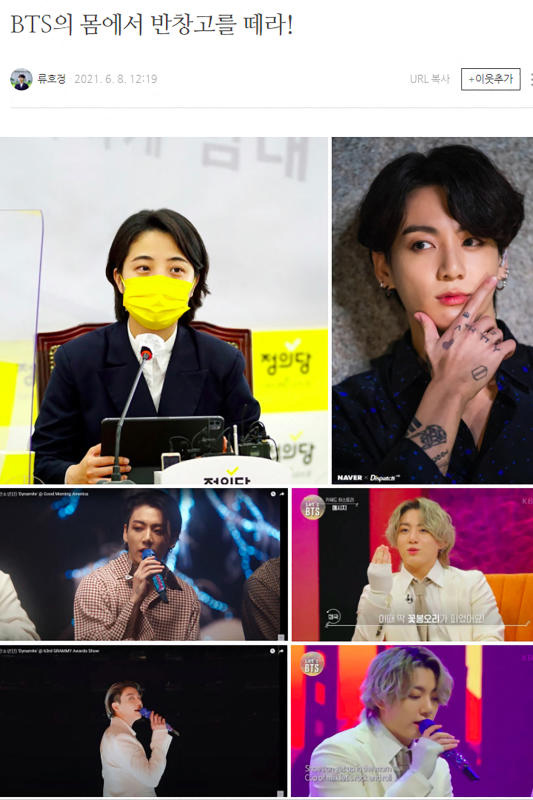 This image captured on Thursday from a blog page of South Korean lawmaker Ryu Ho-jeong of the Justice Party, shows pictures of her (left-top) and tattooed BTS member Jungkook with the title of "Remove band-aid from BTS' bodies". - (AFP / Ryu Ho-jeong photo)

K-pop fans are fiercely protective of their idols and while Ryu Ho-jeong of the progressive minor Justice Party did nothing to claim she had Jungkook's support, she was accused of dragging him into politics.

The South has strict restrictions on tattooing, which while not illegal is classed as a medical procedure and may only be carried out by a qualified doctor -- with violators facing possible imprisonment.

Even though tattoos have become more widespread in recent years, many entertainment figures still apply plasters to hide theirs before making television appearances.

Ryu -- a self-confessed BTS fan -- uploaded pictures of Jungkook to her social media accounts, some showing symbols and the word "ARMY", a reference to BTS fans, tattooed on his right hand, and others in which he covered them with a long white sleeve.

"Have you seen your favourite celebrities covered in bandages on their bodies?" she wrote. "This hideous sight is the result of television stations' regulations on tattoos."

Ryu is proposing a bill to allow trained tattooists to be legally certified.

But her social media accounts were deluged with criticism, including more than 1,000 comments on her Facebook post.

"Don't use a celebrity for your political agenda," said one fan. "I'm glad I had already stopped supporting your party."

The 28-year-old MP, a former labour activist who now holds a proportional representation seat, told a radio station Thursday she had wanted to promote her bill through "everyday and popular content".

"I'd like to apologise if anyone is offended," she added.

But she did not delete the pictures from her accounts, and the critical comments continued to mount.