'Did you know this is huge? It doesn't happen every day. You just gave these kids their first board," says a character in Manjari Makijany's Skater Girl. With what happens in Khempur, a small village in Rajasthan, the skateboard isn't just a toy, it is a symbol of freedom and liberation from having to follow the same endless cycle of unspoken norms.

Unlike other contemporary films involving skateboarding, Skater Girl is mainly an Indian coming-of-age drama, and follows the lives of local teenagers living a life bound by tradition and duty to parents. The tricks that are shown in the movie are pretty basic, but it's still fun to watch the kids try and pull them off, so don't go into this movie expecting to see a fun sports movie with cool kickflips or rail grinding or any other sort of fancy trick like that.

The storytelling in Skater Girl is simple, following a girl named Prerna (Rachel Sanchita Gupta) who's from a lower-caste family in a rural village. Prerna doesn't go to school because she can't afford a uniform and textbooks. Prerna wants a better life but she can't seem to find a way out of her circumstances until she crosses paths with a foreigner named Jessica (Amrit Maghera), a British Indian who's touring her village to learn more about her own family history. Jessica soon becomes a role model for Prerna, helping her to go back to school, as well as introducing the girl and the other kids in the neighbourhood to the art of skateboarding. For the first time, Prerna finds freedom in a new hobby that helps her escape her otherwise mundane family life, only to anger her stubborn and conservative-minded father along with the rest of the community, which sparks the central conflict of the story. At the same time, Jessica, with help from her American friend Erick (Jonathan Readwin), decides to build a skatepark for the village's kids. A lone white woman goes up against the locals, which include Prerna's stern father, an unhelpful politician, police, an upper-caste teacher and an entire community who dismiss her good intentions. 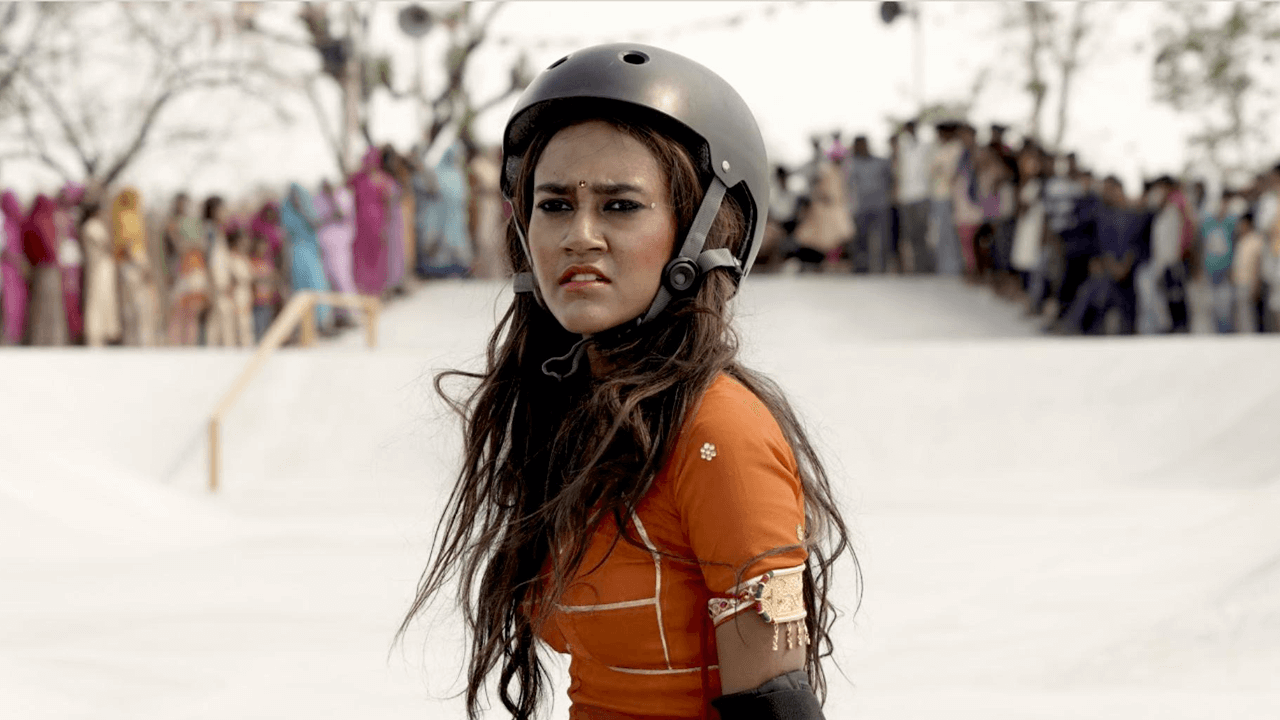 Rachel Sanchita Gupta in a scene from Skater Girl. 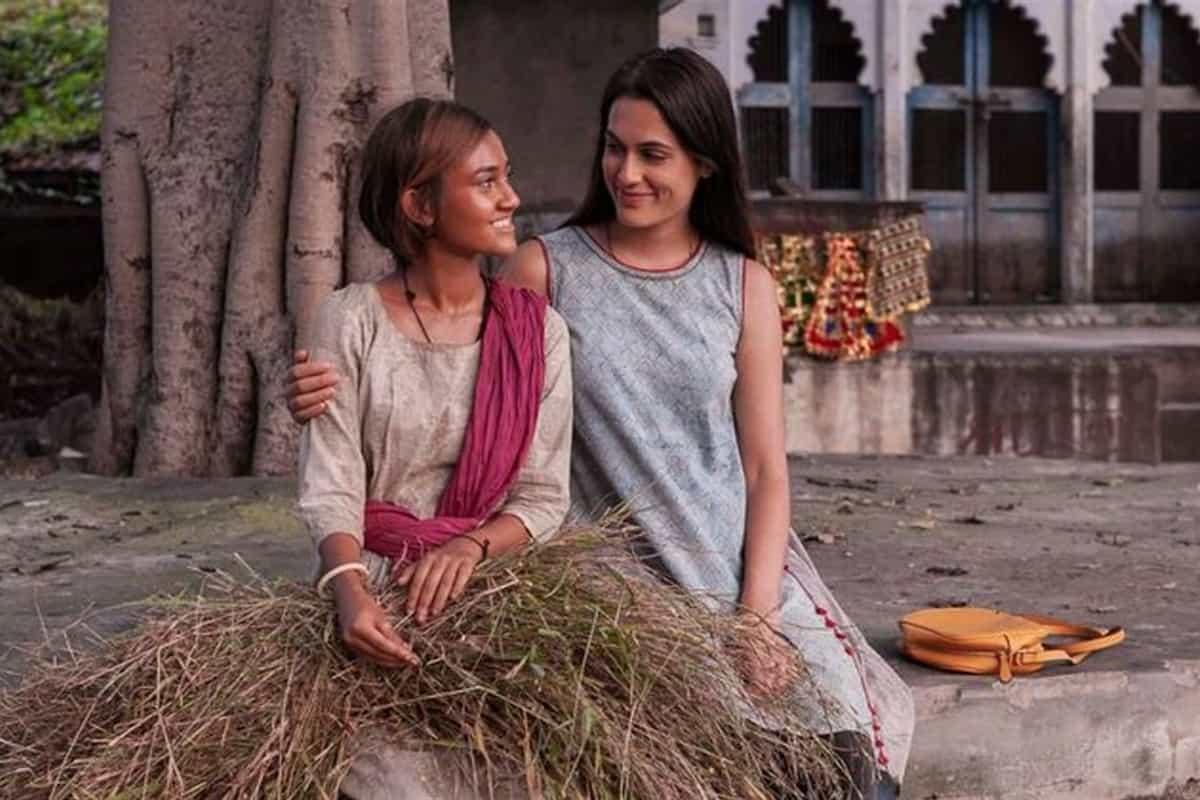 Rachel Sanchita Gupta and Amrit Maghera as Prerna and Jessica.

What's impressive is that the production constructed a 1,350m² skatepark, so those specific scenes were not shot at a soundstage, but instead at a skatepark that was later donated to the local community, which is probably the best thing about this well intentioned, but slight film.

The film addresses some of the important issues in rural India, such as gender equality, double standards and regressive conservatism. But the way the film tells the story feels almost like a fairytale rather than what can actually happen in real life. Because in reality, this scenario would have several horrific possibilities, but in Skater Girl all the problems that arise collapse like a house of cards -- it's just too easy to be true. For example, the purpose of the Jessica role seems pretty strange, especially the whole foreign saviour concept. It's great that she's introducing kids to skateboarding and trying to help build a skatepark. But the logistics make little sense. Where does she get the money to purchase skateboards and supplies for every neighbourhood child, not to mention building the skatepark? And there's almost zero backstory on Jessica and Erick.

While the Jessica and Erick characters are quite banal, a lot of child actors in this movie did a really good job. Rachel Sanchita Gupta, who makes her feature film debut here, did quite an impressive job as Prerna, a girl who's full of emotional ups and downs. The moment Prerna rides a skateboard for the first time, it's like the world's possibilities open up to her. Her performance also turns heartbreaking every now and then, since this movie also features visceral depictions of treating women, especially poor women, as some sort of second-class citizens. Another highlight is Prerna's little brother Ankush, played by Shafin Patel, also such a great supporting character who steals every scene he's in. This kid has a mischievous innocence to him, but he can also be scheming and hilarious in a good-natured way.

The cinematography and editing could have been a little prettier. The cinematography isn't bad, but it is generic and definitely not the best thing I've ever watched. However, there is a lovely sequence in which Prerna and Ankush sneak out of their house at night to practise and the flashlight attached to the front of their skateboards creates these dreamlike designs on the cement floor of the park. That is a lot of fun to watch, but there's so many different scenes in this movie where the camera just doesn't feel right.

The conclusion of this movie also seems half cooked. There are so many important storylines that are completely dropped at the end of the film. Of course, the movie ends on a happy note. But there's so many different threads to the narrative that remain unresolved. There are some serious unexplained consequences for actions that occur in the film's third act that leave you wanting more. Yes, our protagonist was able to do something she enjoyed and she is happy. But how that actually impacts her and her family, we will never know. Overall, if you're looking for an interesting coming-of-age story and you don't mind a few tonal inconsistencies here and there, perhaps give Skater Girl a try. And no matter how impossible the scenario in this movie, it's always lovely to see a young girl take flight.