Extinctions as seen through art

On show at Warin Lab Contemporary art gallery, the "Reincarnations III – Ecologies Of Life" project by Ruangsak Anuwatwimon is a site-specific work. The art gallery is the former home of Dr Boonsong Lekagul, a medical doctor and the first ecologist in Thailand to advocate the need to preserve endangered animal species in the country.

This is an appropriate venue for "Reincarnations III – Ecologies Of Life" since the exhibition tackles animal extinction issues. Ruangsak created installations related to three extinct animals -- the Bhutan glory butterfly, the Japanese fox and Schomburgk's deer -- in order to make people question their role in contributing to animal extinctions and the consequences to ecology when this happens.

Ruangsak's idea about "Reincarnations" began in 2012 with his interest in butterflies, especially the extinct Bhutan glory, and his desire to clone them. However, after talking with his geneticist friend, he realised that to clone the Bhutan glory, many requirements would be involved.

"My friend questioned why I wanted to clone the Bhutan glory. I simply wanted to bring back the animal from extinction. However, I do not know the diet of the Bhutan glory butterfly. Some people said it probably fed on a rare plant called Aristolochia which grows in the mountains. Since the plant is hard to find, the butterfly will not have a steady food source, so I thought if I cannot revive the Bhutan glory, I can at least bring back the history of its existence," said Ruangsak. 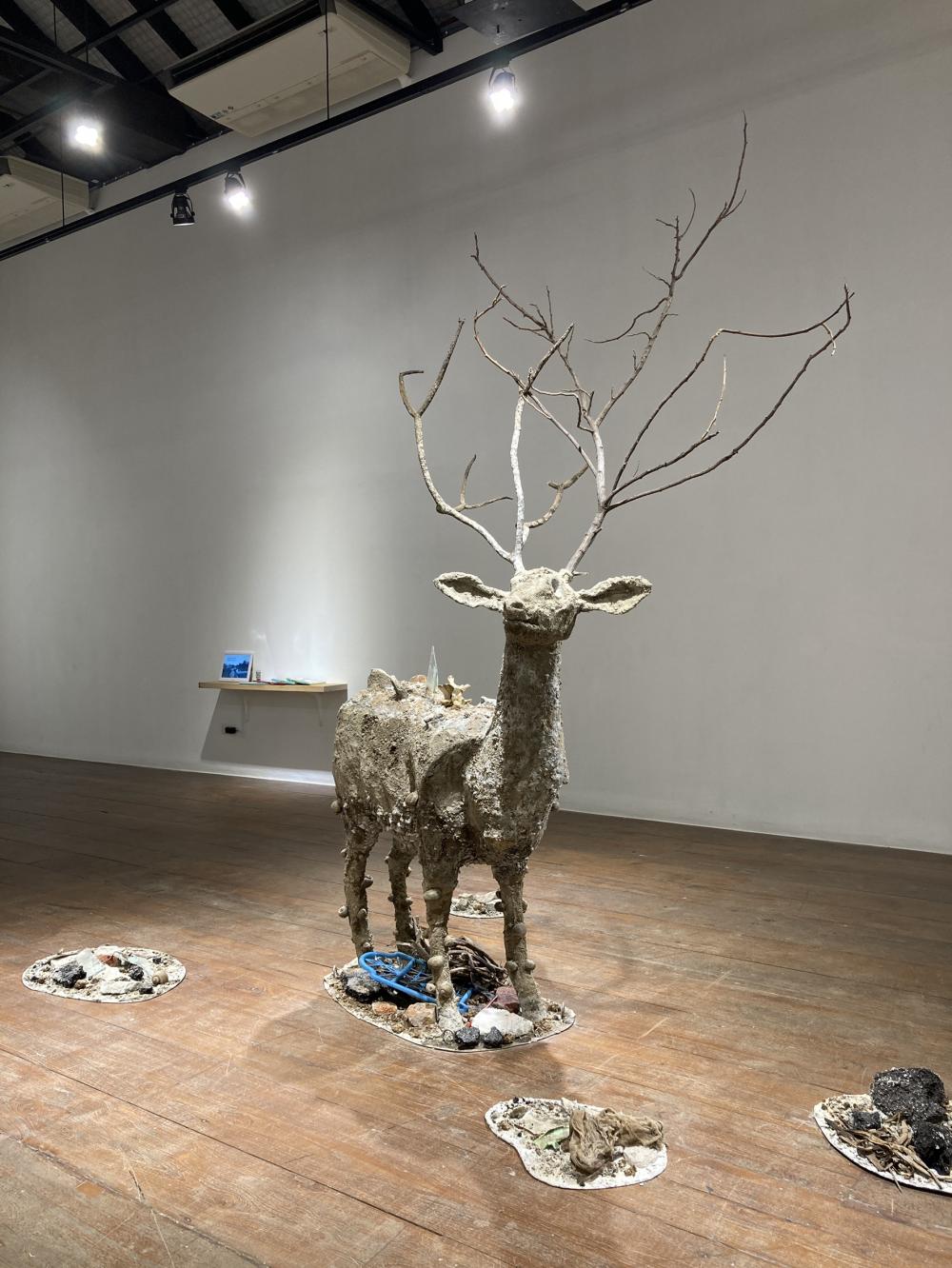 The Bhutan glory could be found only on the mountains of Doi Chiang Dao in northern Thailand, but it became extinct in the 1970s due to unethical collection practices. At Warin Lab Contemporary, Ruangsak created an image of the Bhutan glory in colourful high-resolution papers. He also displayed a stamp by Thailand Post and a book that had pictures of a similar butterfly that was mistaken to be the Bhutan glory.

"The butterfly in the stamp and the book was a Myanmar butterfly. The Bhutan glory's wings are brown with some orange spots. As a small animal, a butterfly is often undervalued and most people cannot differentiate between them. When large animals like rhinos or kouprey become endangered, there is news about it. However, a butterfly vanishes, people are unaware," the artist said.

In 2018, after the last male northern white rhino died, Ruangsak developed "Reincarnations" during his residency at the Center of Contemporary Art in Kitakyushu, Japan. Ruangsak conducted research about the Japanese wolf, which was last seen alive in the early 20th century. According to his research, the Japanese wolf was considered the guardian of the emperor and a god. At the exhibition, a map of Japan is displayed and the location of wolf shrines are marked on it. 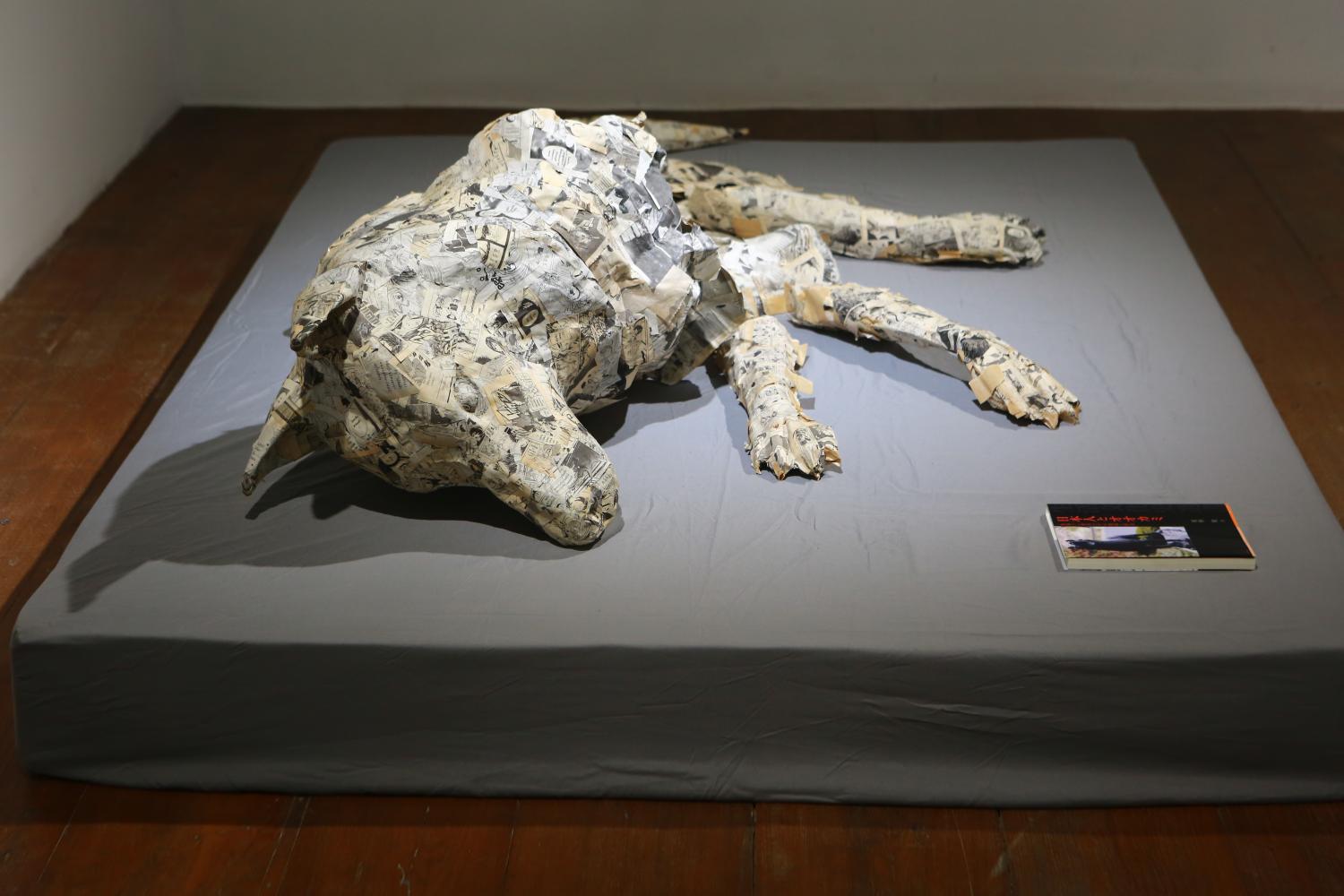 A papier-mache sculpture of a Japanese wolf.

"Most areas where the wolves used to live do not have wolf shrines. Instead, there are many shrines in Tokyo and Kyoto, which are the centre of power. Authorities ruled with the wolf spirit. It is a power in terms of spirit which people use to make deals or requests for things. Kyushu Island is an area where wolves lived but they went extinct over a hundred years ago. When my exhibition was displayed there, many native Kyushu did not know that wolves used to live in the area. In addition to the map of shrines, I created a papier-mache sculpture of a Japanese wolf from pages of Japanese mangas and novels which have content related to the wolf," he explained.

Besides creating artwork related to animal extinction, Ruangsak also created art pieces that focused on two critically endangered Singaporean species of trees -- the Hopea sangal and Sindora wallichii -- at the Singapore Biennale in 2019.

Along with the butterfly and the wolf, a newly commissioned piece on show at "Reincarnations III – Ecologies of Life" is a life-sized installation of a Schomburgk's deer. It was created from various materials -- soil, rocks, glass, brick, scallops -- collected from areas relevant to the deer such as Chulalongkorn Watergate, Future Park Rangsit Shopping Mall and various canals. Ruangsak visited locations where Schomburgk's deer roamed or were captured to collect material and spoke to local people. He discovered that Schomburgk's deer were driven from Rangsit Field because Bangkok was expanding. They were hunted and their numbers dwindled until they eventually went extinct. However, Ruangsak found that there was no record of the extinct deer such as height, lifespan, sounds and complete antlers. Since a replica of a Schomburgk's deer cannot be found in Thailand, the artist travelled to France. 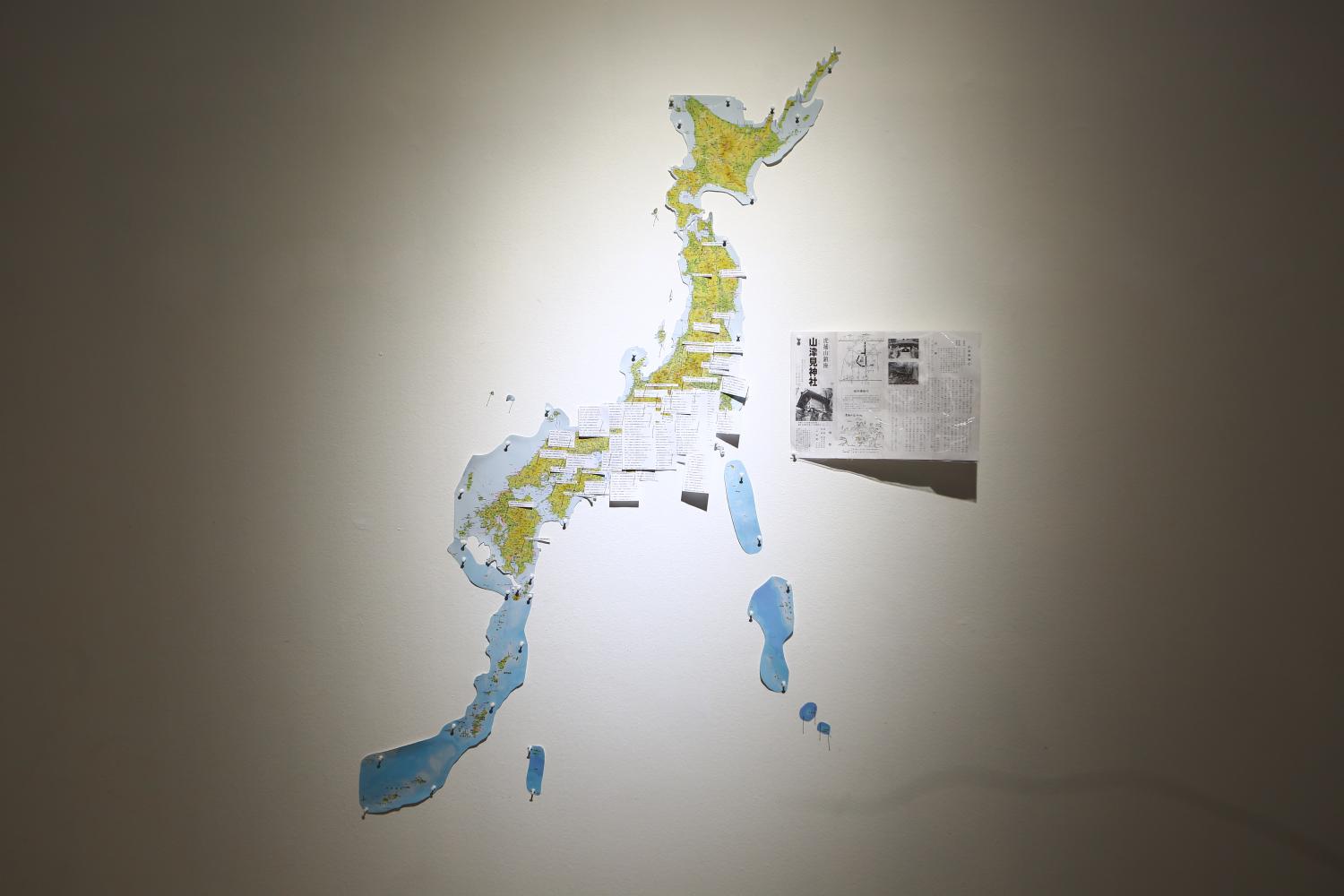 Locations of wolf shrines in Japan.

"I visited the National Museum of Natural History in Paris because the only embalmed replica of a Schomburgk's deer is displayed there. This Schomburgk's deer was sent from Thailand to France as a present along with other deer when it was very young and did not have antlers yet. Also, in the past, many people in Thailand who collected antlers of Schomburgk's deer threw them away in canals or gave them away to temples because they were afraid of the consequences of violating the law regarding wildlife conservation. This caused misunderstanding about locations of Schomburgk's deer because many antlers were found in Isan, but the deer lived in central Thailand," he said.

"We are not in the 70s when people hunted animals and thought every creature could be revived. Existing species should not become extinct. The reincarnation series uncovers the root cause of each extinction. I hope to continue the series and it will soon cover 10 to 20 extinct species. So, it will be like a museum of human errors. I do not want to be dramatic but a certain species of male bird in Hawaii has been calling for its female mate for two years because he is the only one that is left in the world. Imagine if the bird is a person, what would it be like?" concluded Ruangsak. 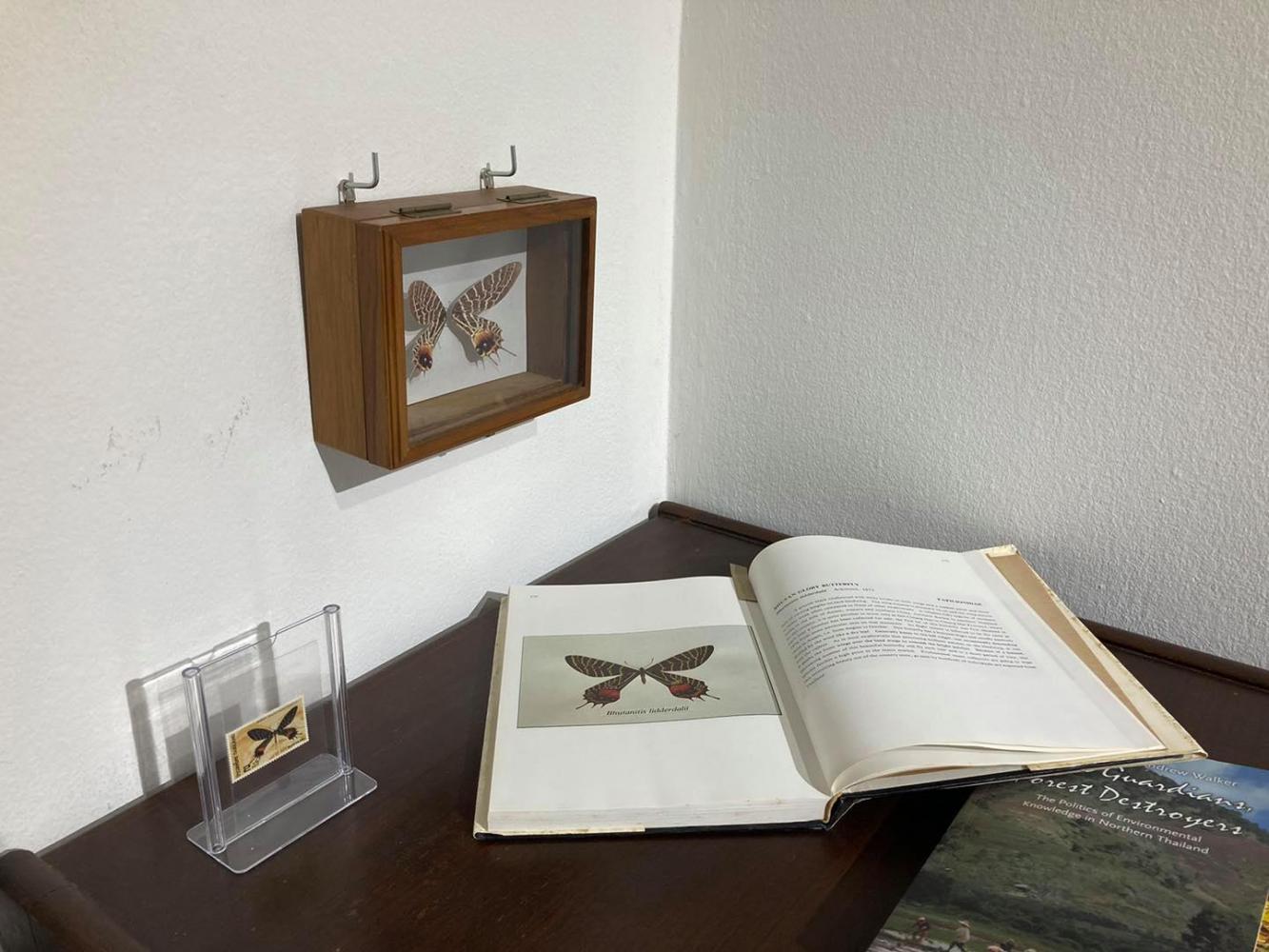