Over the past few years, it's been amazing to see Chris Pratt's transition to a mega action star from a small role as Andy, a goofy boyfriend in the sitcom Parks And Recreation, to more sci-fi and action roles like Peter Quill/Star-Lord in The Guardians Of The Galaxy franchise, a mysterious mechanical engineer in space thriller Passengers with Jennifer Lawrence or dinosaur researcher Owen Grady in the Jurassic World franchise. Now Pratt is using his skills to play a military scientist with daddy issues who goes against time on a mission to save the world from an alien invasion in The Tomorrow War. Although lacking an original idea, with parts of the story derived from many past sci-fi hits, The Tomorrow War is still an enjoyable action-adventure with adrenaline-fuelled chase sequences.

The premise of The Tomorrow War is quite straightforward. The movie opens in the year 2022 when a group of time travellers arrive from the year 2051 to deliver an urgent message that 30 years in the future, the world will be in great danger as mankind is losing a battle against a ravenous and mysterious alien species called the Whitespikes. The only hope for survival is for soldiers and civilians from the present to be transported to the future and join the fight. Among those recruited is high school teacher and family man Dan Forester (Pratt). He is determined to save the world for his young daughter Muri (Ryan Kiera Armstrong). Dan is pulled out of his normal life and back into his military days as he teams up with a brilliant scientist on a desperate quest to rewrite the fate of the planet and the future of all mankind.

This is probably the kind of plot you might have imagined Tom Cruise playing almost two decades ago in a cross of War Of The Worlds (2005), Independence Day (1996) and maybe a little bit of Interstellar, a 2014 heartfelt movie with an emotional father and daughter storyline. After spending about 45 minutes setting the background stories of the characters and plot, the action begins. For the most part, I think the movie did a great job at bringing non-stop action to satisfy fans of this genre. The creature designs of the aliens are quite impressive and very dangerous looking, kind of like a combination between a predator alien and raptor dinosaur. They're naturally armoured and have some really cool features with an attack ability that adds excitement. I don't see a Star-Lord or Owen Grady resemblance in Dan Forester's character here and every scene reminds us of why Pratt is now Hollywood's latest action star. The man has his own unique charisma as well as vibe, especially in this film where he has a fistfight with aliens like some kind of MMA champ which was hilarious and entertaining to watch.

The pacing is also great and all the gunfights and explosions are done to make us forget about the predictable drama and other flawed details. For example, halfway into the story, you might start to question its confusing logic, like, isn't it a bad idea to send thousands of people from the present into a future where they're almost likely to get killed by unknown aliens and risk being removed from the timeline and further reduce the world's population in the future? Or why send people to where an invasion is already happening instead of sending them not so far into the future and attack at the beginning of the threat? 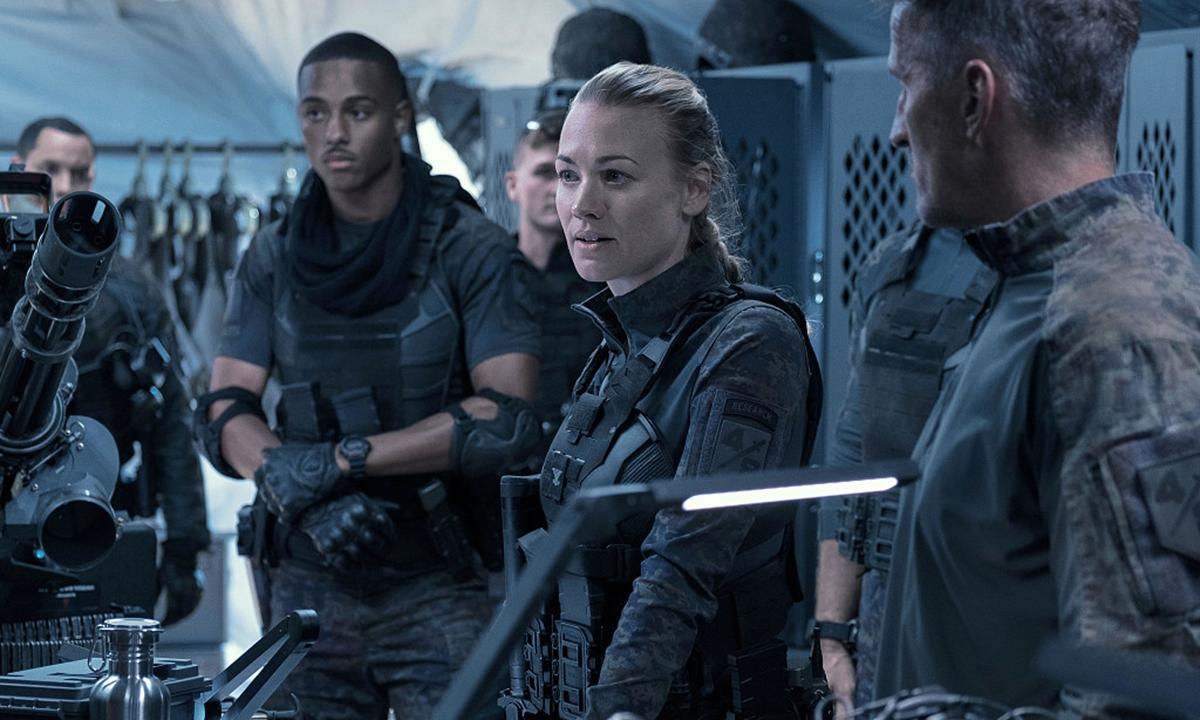 Another issue I found with the film is the lack of supporting characters. They're basically cardboard cutouts and it's a real shame because there was potential in characters like Dorian (Edwin Hodge), a veteran soldier who's dying of cancer but never gets the screen time needed to make his death impactful, or Lt Hart (Jasmine Mathews), a leader of the future military whose arrival at the start of the movie seems to imply she'll be an important character, however, she disappears until the last 15 minutes. The problem is that the movie wastes too much time on bloated scenes between Dan and his daughter to the detriment of everyone else.

The Tomorrow War lacks emotional investment or a strong identity of its own film to bring anything new to the table. However, none of that seems to matter because the film basically chooses to ignore that and encourages you to do the same. Perhaps it's a simple undemanding old fashioned kind of movie that seeks to do one thing -- entertain its audience. Despite the unoriginal premise, forgettable plot and dialogue, The Tomorrow War is still worth checking out, especially if you're looking for easy fun, some cool action sequences and creepy creatures. So I'd suggest you don't worry about what's missing and just enjoy yourself.