Gone but not forgotten

In a world where people have to live in a limited space behind huge walls in order to survive a man-eating Titan, Erwin Smith, the 13th Commander of the Survey Corps sacrificed his life in a battle with massive monster. The commander hoped that his people would have freedom and experience life beyond the walls.

The death of Erwin Smith, a fictional character in the manga series Attack On Titan, affected fans around the world emotionally. Artist Jinnipha Nivasabut, better known as Pan Jinnipha, a fan of manga and Japanese animation, has experienced the loss of several beloved manga characters. Thus, the young artist created the art exhibition titled "2D AfterLife" at Palette Artspace, which has been set up in the atmosphere of a funeral.

Next to the entrance, there are two wreaths. One is from Palette Artspace and the other is from Speedwagon, a fictional foundation in manga JoJo's Bizarre Adventure. On the walls, there are fifty funeral portraits of characters, such as Erwin Smith, Itachi Uchiha, Iggy and Nina Tucker, from 12 manga series, including JoJo's Bizarre Adventure, Naruto, One Piece and Fullmetal Alchemist. Sandalwood flowers are available on a table for visitors in case they wish to show their respects and mourn the deceased characters.

"I saw the American superhero movie Avengers: Endgame where there was a funeral after the superheroes died. I was inspired by the scene and wondered if it was possible to arrange a funeral for fictional characters. I am also interested in portraits because the face is the body part that people notice first and the face expresses emotion. Therefore, I decided to paint funeral portraits inspired by dead manga characters," explained Jinnipha.

Jinnipha admitted that some manga death scenes made her cry. 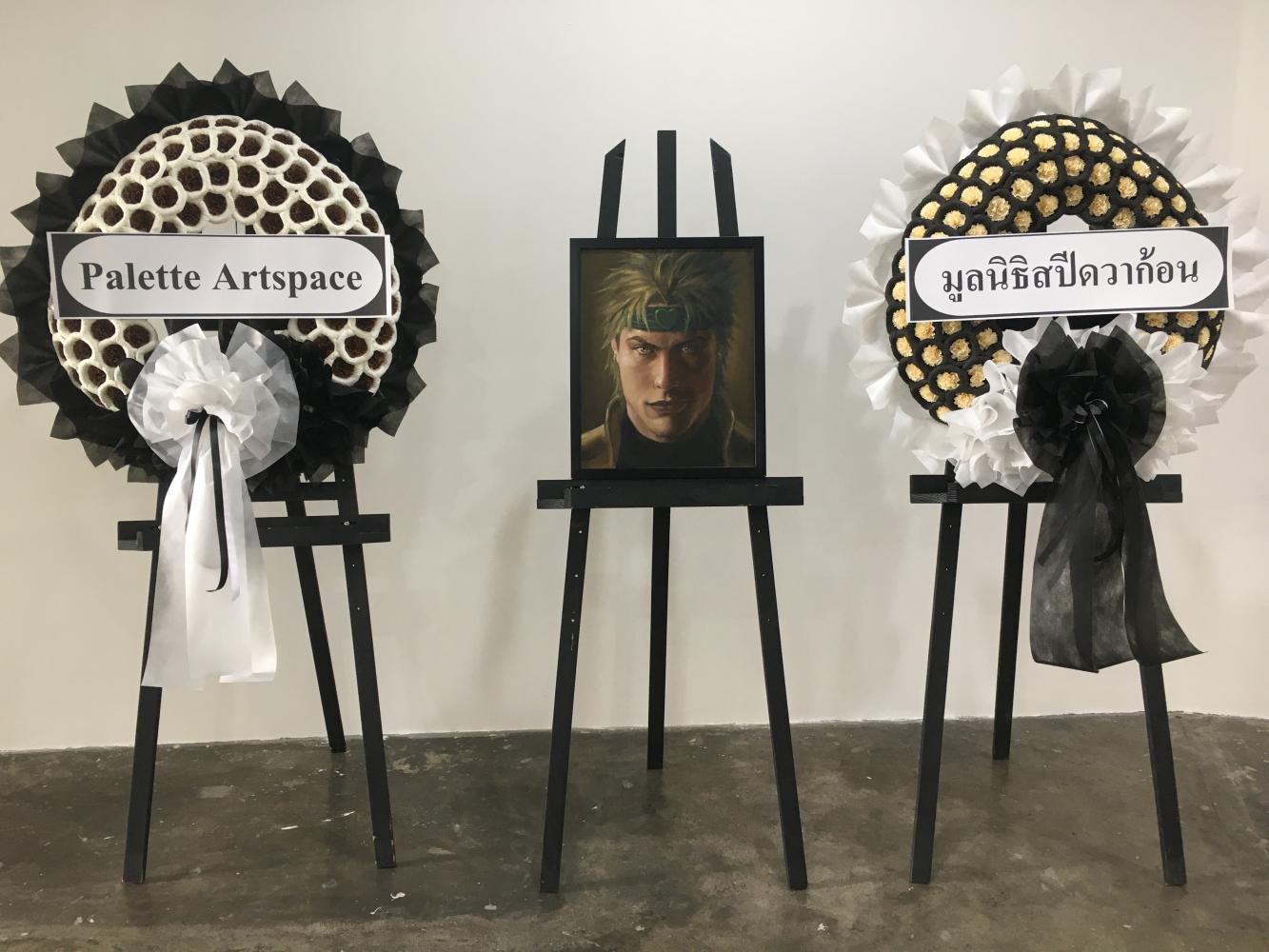 Wreaths are laid out to pay tribute to the Dio Brando from JoJo's Bizarre Adventure.

"I do not want to be too emotional but I cried in a cinema while watching Demon Slayer The Movie: Mugen Train when one of my favourite characters, Kyojuro Rengoku, died. Even though I knew about his death from reading manga, the images, sound effects and music made me emotional. These manga characters do not exist in the real world but their deaths have an impact on people," said Jinnipha.

Oil portraits displayed at the exhibition were developed from manga drawings combined with the artist's own imagination about each character.

"My paintings are semi-realistic. They combine animated and realistic elements. I visualised how each character looks like in the flesh and drew facial features that I had in mind which can be different from how other fans imagine them to be," she said.

Like many children in Thailand, Jinnipha's fondness for Japanese animation developed after watching several programmes on Modern Nine TV. As she grew up, she became interested in male comics as well as Seinen manga such as Berserk and JoJo's Bizarre Adventure which targets young adult males.

"Japanese manga attracted me with its fantasy and entertaining content. One of my favourite artists, Takehiko Inoue, who created Vagabond and Slam Drunk, has a unique drawing style and came up with new techniques such as drawing lines with a brush pen. His storylines flow smoothly and feature multi-dimensional characters," said the artist. 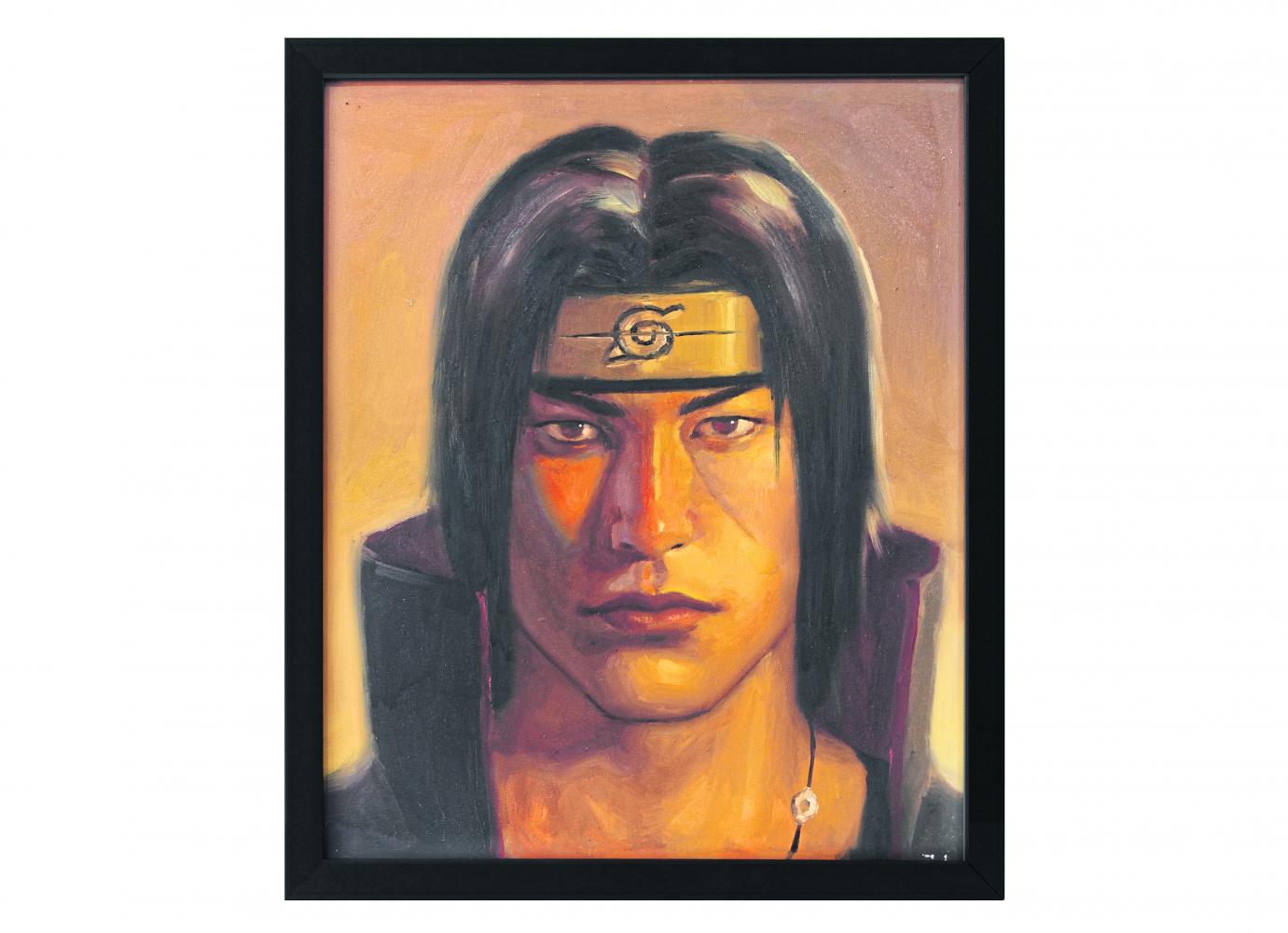 Male manga usually has violent content and some brutal scenes that lead to death. Some people may think comics and animation are for children but not all are suitable for youngsters.

"As an adult, I can accept fighting and violent scenes in manga because they are animated and not real, but publishers and producers must be responsible for carefully rating their productions to be appropriate for viewers of different age groups," said Jinnipha.

Although much of what Jinnipha likes features violent content, many characters that she chose to paint are selfless characters.

"Erwin Smith from Attack On Titan is a role model for other leaders to emulate. He did everything to make the world a better place, even sacrificing his life. Itachi Uchiha in Naruto is a ninja detective who sacrificed the lives of his family for people in his village. These characters died in an imaginative world but their memories remain in viewers and readers. The exhibition makes them reborn in an art form," said Jinnipha.

The artist earned her bachelor's degree in painting from the Faculty of Fine Arts at Srinakharinwirot University. The exhibition "2D AfterLife" was developed from her thesis during her undergraduate years. 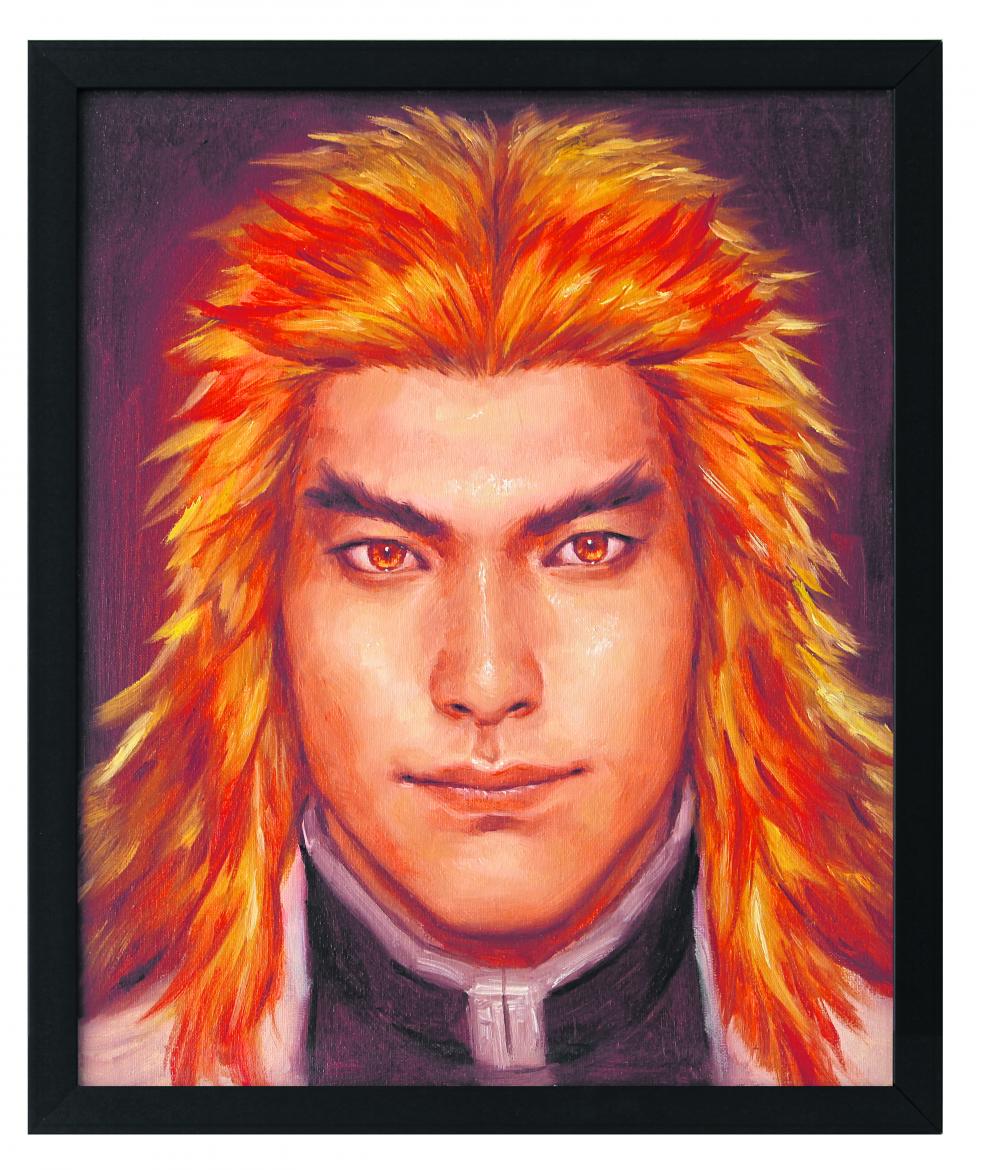 "I was glad that an instructor approved my thesis. There is a bias in the art industry that manga and animation are not considered art. My thesis was about how I felt regarding dead manga characters but the exhibition is an interaction with manga fans. I received many messages from manga fans on social media. Some fans asked if there are portraits of their favourite characters and one even asked me if she could come to the gallery to offer a sandalwood flower to one of the characters. It dawned on me that the death of manga characters does not have an impact only on me alone," said Jinnipha.

To exhibit paintings inspired by dead manga characters in a gallery is a big step for the artist. She hopes the exhibition will be an opportunity to exchange ideas with other people in the manga fandom.

"I would like to see more people visit a gallery. It should be a regular activity and people should not think art is something only for the privileged. Everyone can express their opinions about art. There is a fan who thinks Itachi Uchiha should not look like how I drew him. It is interesting. I want to hear more about other fans' opinions," said Jinnipha.

"2D AfterLife" runs at Palette Artspace, Soi Thonglor until Aug 3. Due to the Covid-19 situation, the exhibition can be viewed online at facebook.com/palette.artspace, artsy.net/partner/palette-artspace and cryptovoxels.com. 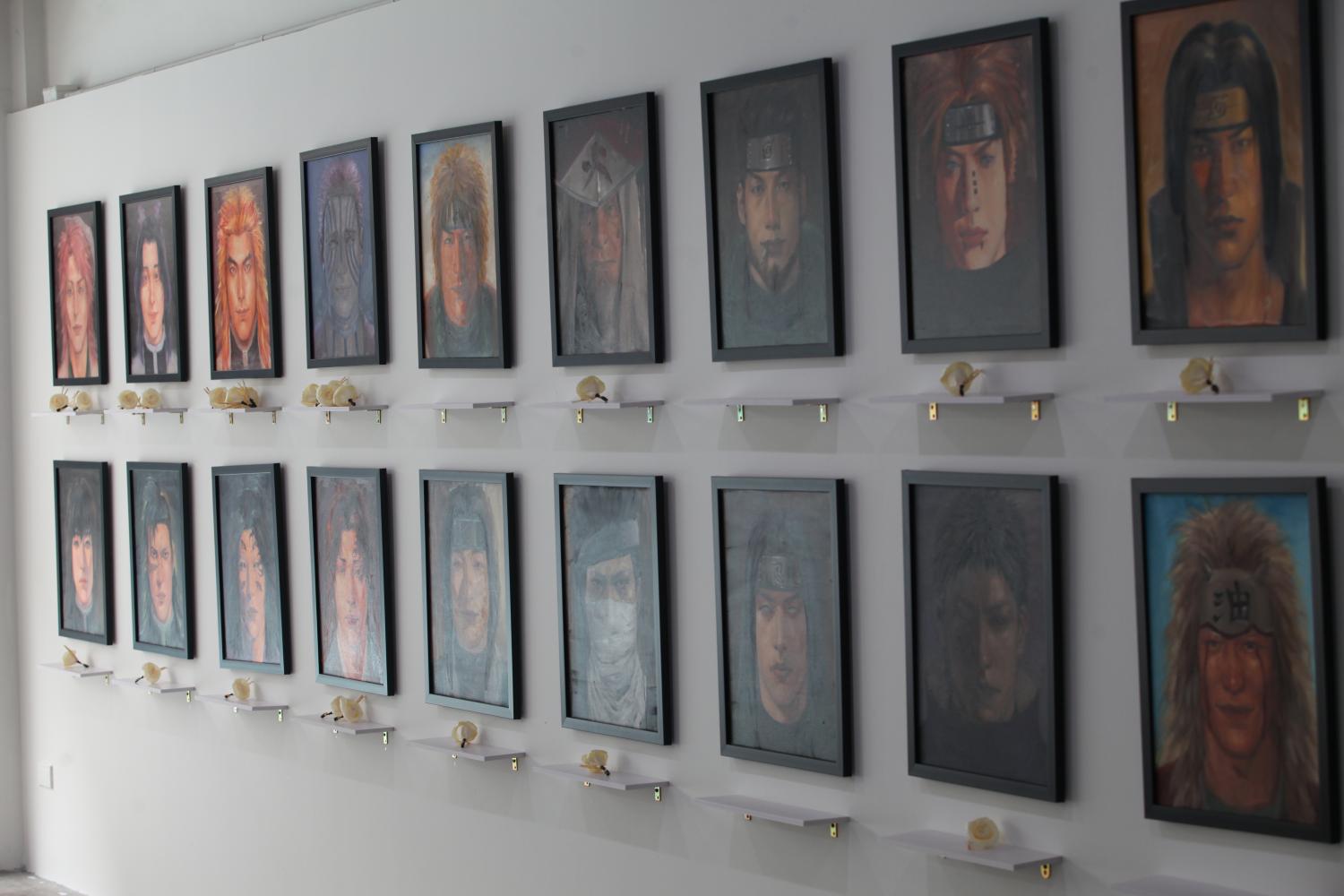 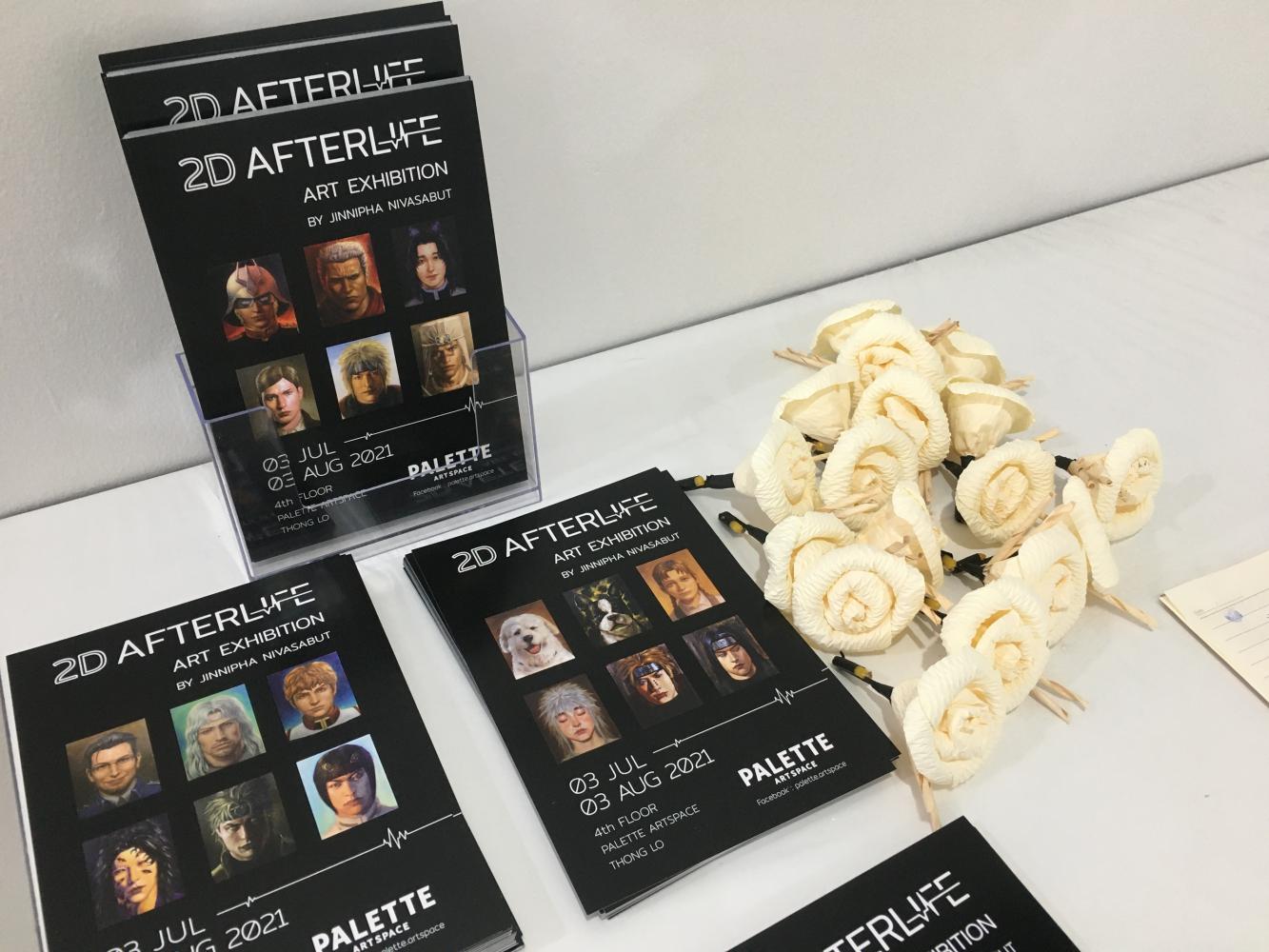 Sandalwood flowers on a table. 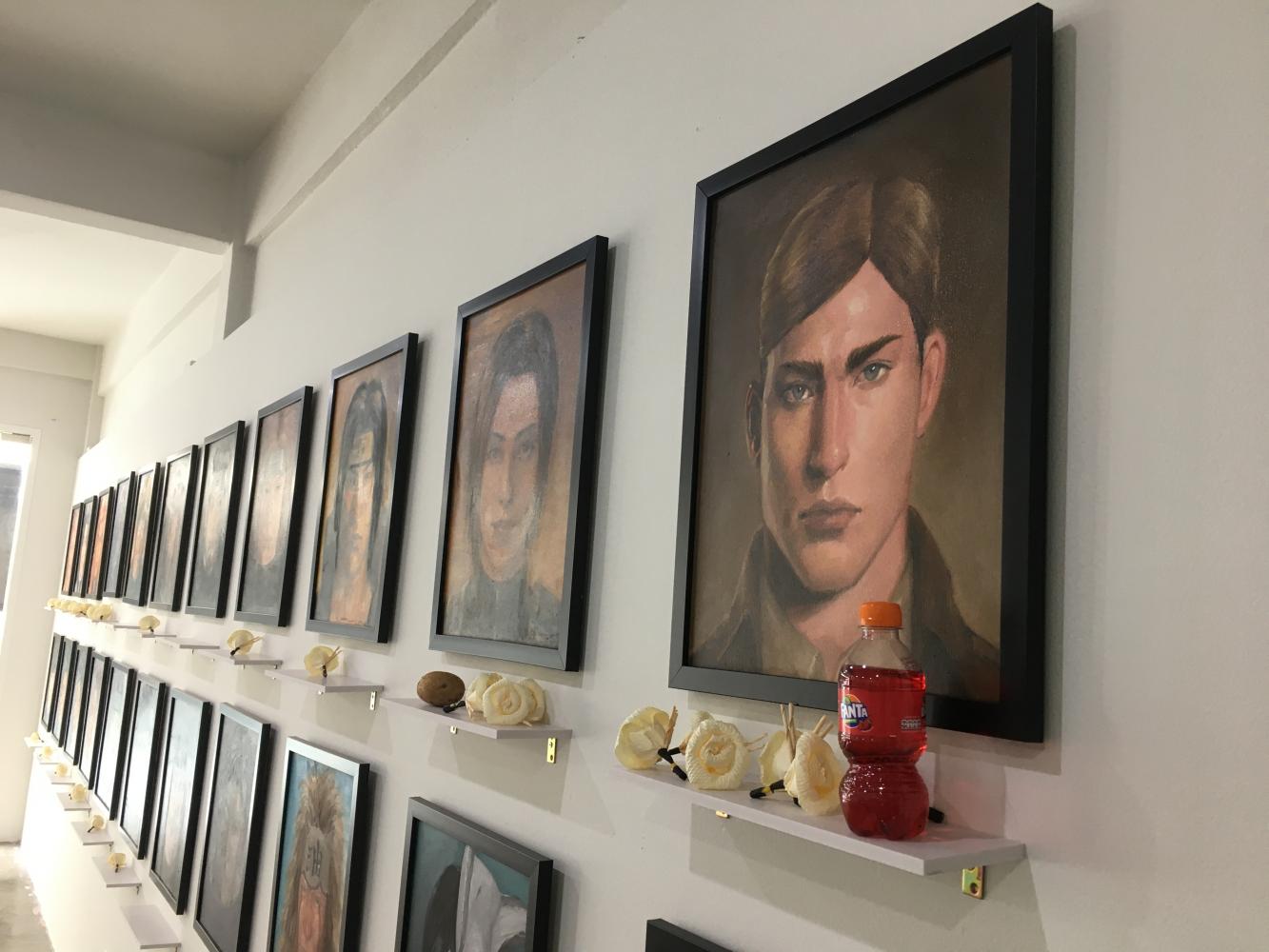 People paid their respects to Erwin Smith with sandalwood flowers and soft drinks. 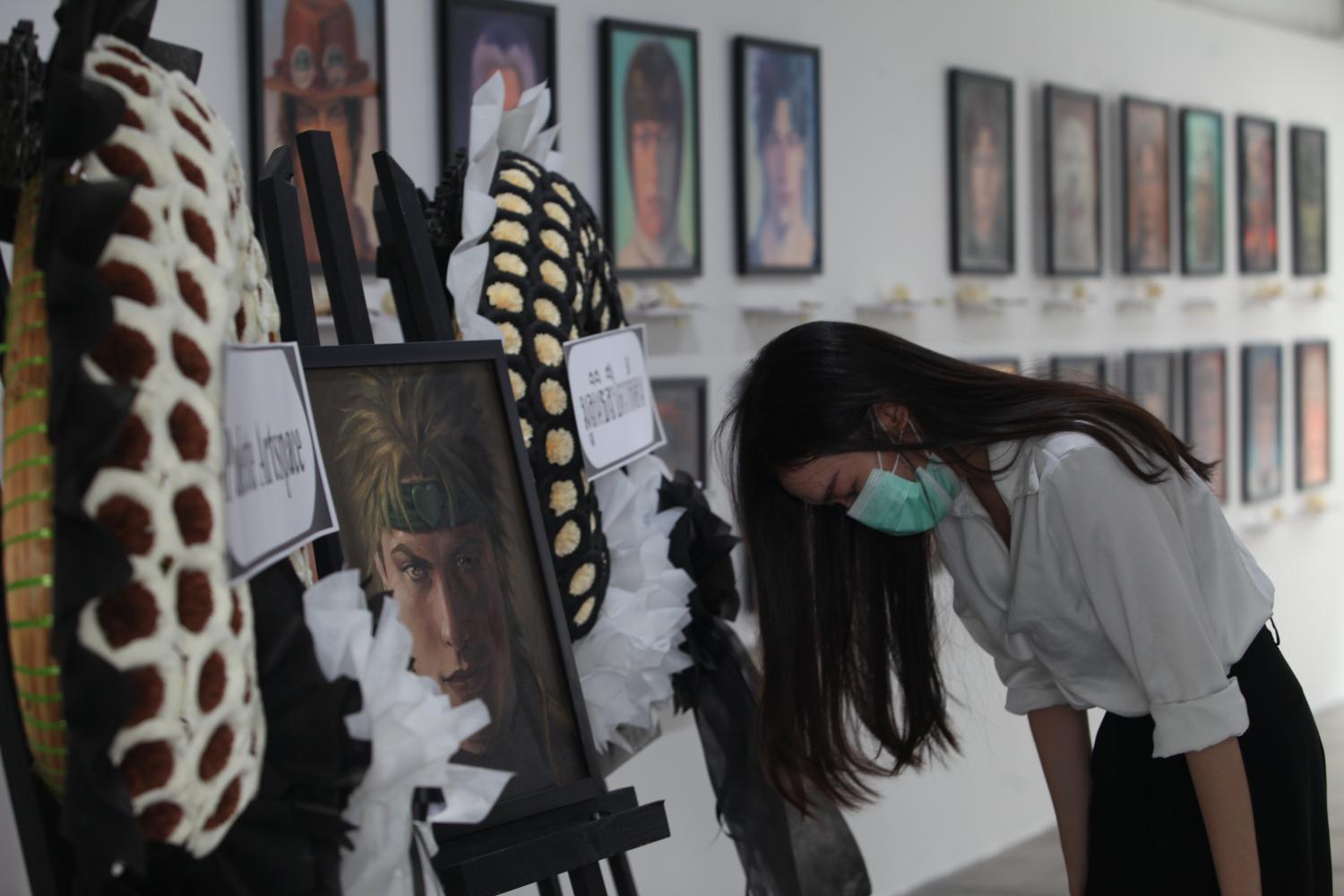