Inspiring youth to get creative

Even though Thailand has a good reputation for arts and crafts, its basketry industry has an image of unstylish designs. To encourage the young generation to become interested in arts and crafts, the Sustainable Arts and Crafts Institute of Thailand (Sacit) and JSL Global Media teamed up to launch a reality competition show titled Sacict War Craft on Amarin TV starting Aug 7. In the show, five teams of young designers compete to create weaving product designs. Vachara Vaewuthinand, who is on the board of directors and a production consultant at JSL Global Media, said creating Sacict War Craft was a challenge.

"Thailand is known for basketry. Many Thai designers such as Korakot Aromdee -- one of the three mentors on Sacict War Craft -- have built a global reputation due to their outside-the-box ideas. To attract young audiences, we created a reality competition that focuses on young participants. This reality show will feature the ups and downs of the participants during their process of designing. Viewers will see that participants have opportunities to think out of the box which is what the young generation is keen to do. However, they must also learn how to work in real situations," explained Vachara.

A total of five teams for Sacict War Craft were selected from 31 teams. Three members in each team work together to design basketry products in three categories -- fashion, home use and decoration, and innovation. The young designers must choose from one of these raw materials -- krajood (grey sedge), kok (cyperus), bamboo strips, and pan sorn narai (sisal) -- for their designs. After participants finish, their works are reviewed and critiqued by three mentors -- Korakot Aromdee, basketry artist and founder/creative director of Asava, Polpat Asavaprapha, and actress Sujira "Nui" Aroonpipat. The winning team will receive a trophy donated by Her Royal Highness Princess Maha Chakri Sirindhorn and a 100,000 baht cash award.

Chuthamas Apisuwannakul, a student at the Faculty of Decorative Arts, Silpakorn University, said that before taking part in the show, she was not interested in basketry. 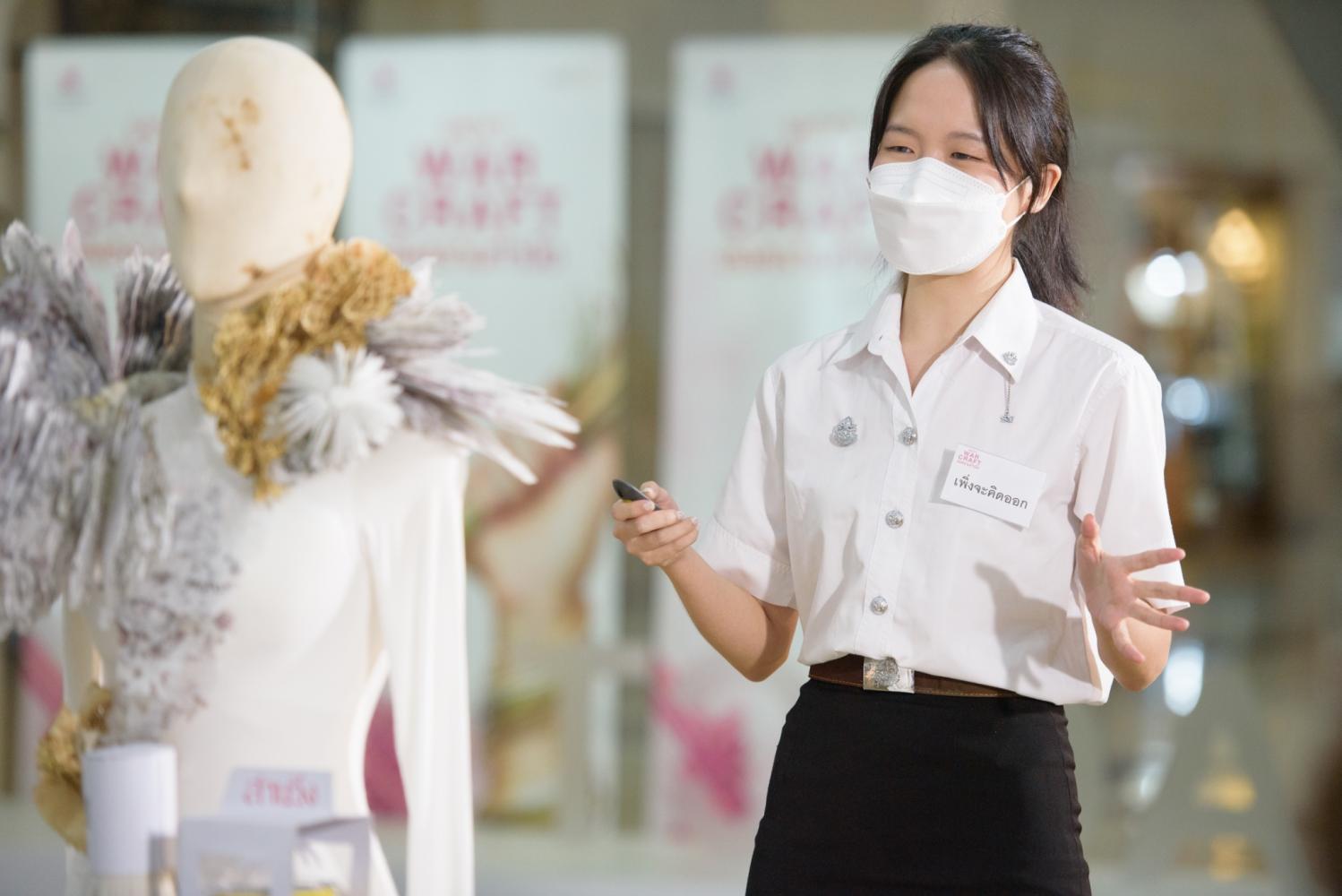 Chuthamas Apisuwannakul learned how to improve her designs through the show.

"I like to view work created by international artists. This is similar to people in other countries who do not pay attention to their local arts but are interested in Thai basketry. In the show, my team and I designed different products for different categories. I was responsible for the home use and decoration category and I chose bamboo strips as my material," said Chuthamas.

Vachara believes the charm of Sacict War Craft is that it allows people of different generations to work together.

"Viewers will see how older generations with years of experience and the young with fire and new ideas co-operate with each other. Older generations are basketry masters and experienced mentors. Since the show aims to make practical products, end-users will have an opportunity to try each product and comment on it. The young designers will also learn that some chic designs may not be practical," said Vachara.

As a mentor of the show and also a basketry artist, Korakot helps inform viewers about Thai craft gurus and raw materials.

"The programme introduced raw materials and their locations as well as many basketry masters in the country such as the owner of Vassana Asst Prof Vassana Saima in Chiang Mai and bamboo artisan Komkrit Boriboon in Chon Buri. The show is a medium between basketry masters and young designers to create stylish products from local raw materials so that basketry designs will no longer be outdated," said Korakot. 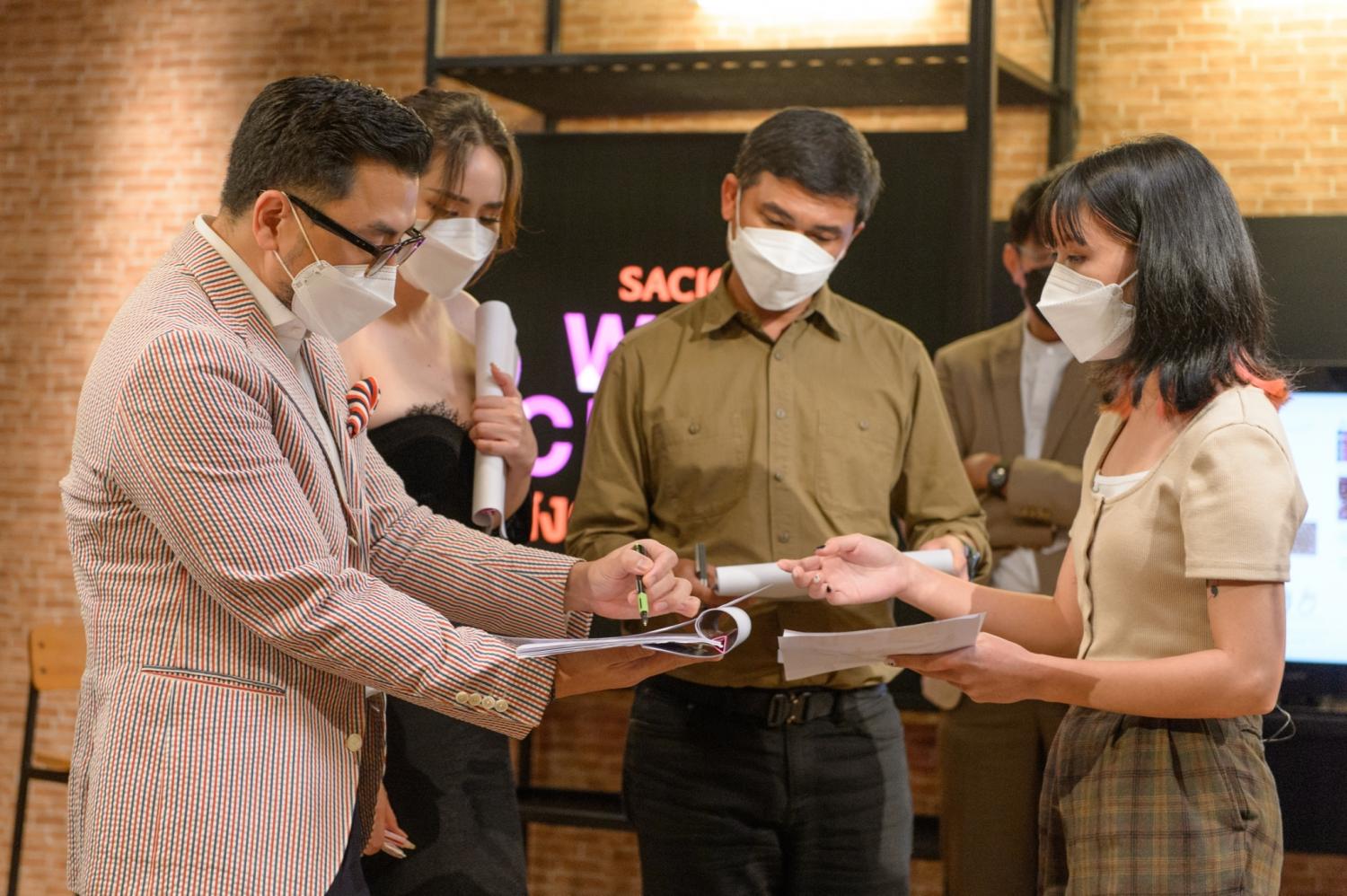 To make the show more interesting for general viewers, five celebrities -- DJ Bookko, Gyp Pokchat, New Chaiyapol, Pancake Khemanit and Toomtam Yuttana -- became the personal supporters of each team. Viewers who enjoy dramatic scenes can expect to see these kinds of moments in the show. Vachara explained that Sacict War Craft has dramatic moments that happen naturally and spontaneously.

"Since it is a reality show, the content is naturally dramatic. In the first episode, only five teams were selected from 31 teams. Some people who were eliminated were upset but after that, participants realised that they had to change their designs because they were not as good as they had thought. However, it does not matter how dramatic the situations are as our A teams focused on the end product which has to impress viewers. We believe that the young designers can do this," said Vachara.

Before Korakot became the owner of the successful bamboo handicraft brand Korakot, he participated in many competitions. This Phetchaburi local believes that participating in competitions is important for students.

"More than 100,000 design students graduate each year. If a design student participates in a competition and is selected to be a finalist, he/she will stand out from the crowd and can easily find a job. When students fail in any competition, they should work hard and try to learn more about raw materials so they can apply their knowledge to other projects and gain more experience. Do not be discouraged. There are many competitions each year," said Korakot. 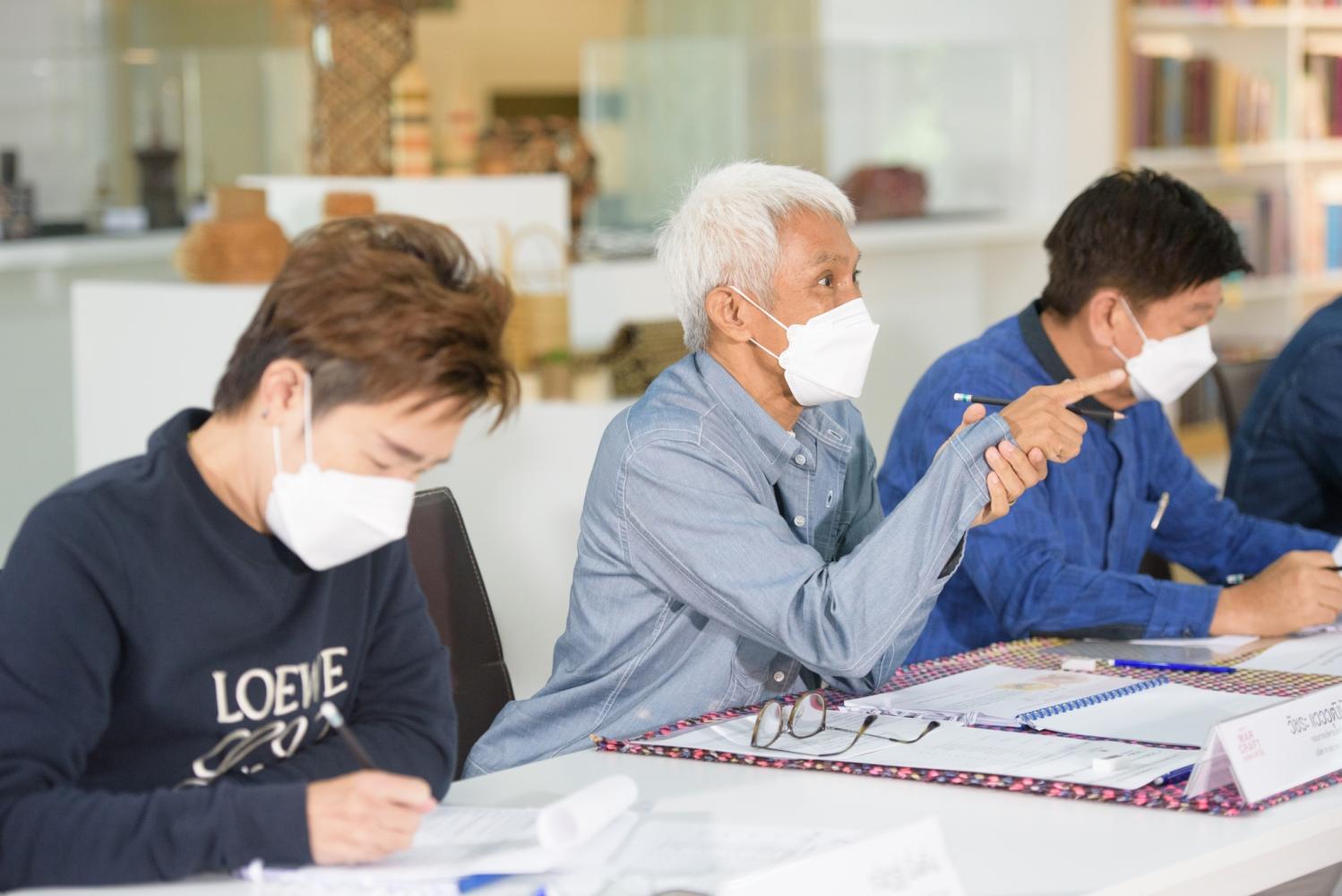 On the show, participants cannot avoid being critiqued. As a competitor from the team Just Thought Of It, Chuthamas said she can handle negative feedback from mentors.

"I did not feel upset when mentors criticised my design. Their criticism helped me improve. I learned how to communicate and co-operate with bamboo artisan Komkrit Boriboon and people in the community in order to make a finished product. This is different from studying in a classroom since I have to do many things myself," said Chuthamas.

After being in the handicraft business for longer than a decade, Korakot noticed one weakness of Thai handicraft designers is that they are too lazy to learn about raw materials.

"Designers must understand materials, so they can explain how special they are and why customers should buy their products. Also, if they understand the material, they will be able to fix the product themselves. For example, when a handmade sculpture that is sent abroad is damaged, I can immediately go there to fix it with my team. If a designer cannot fix it himself and has to hire others to do it, it will cost a lot of money," said Korakot. 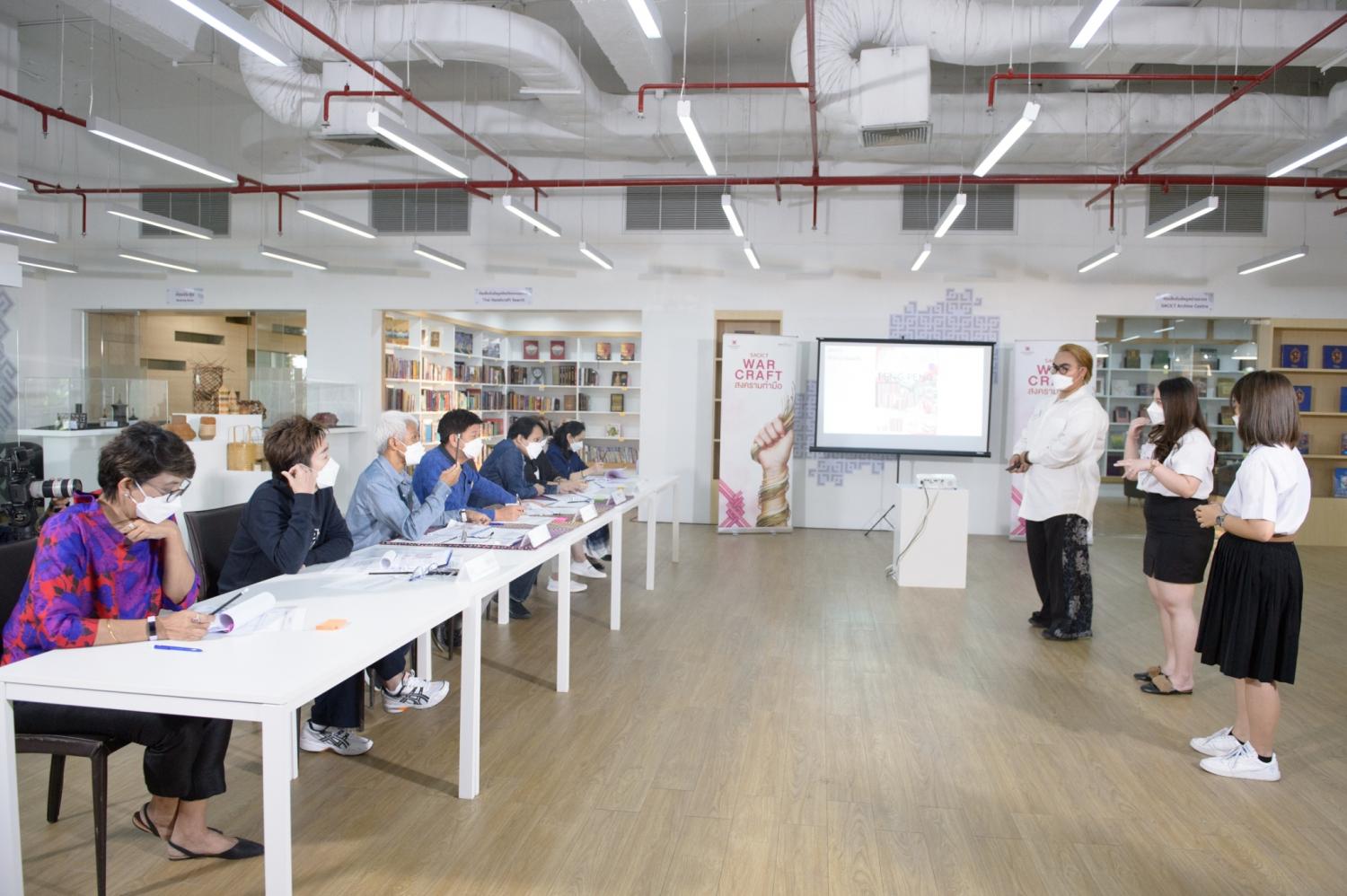 Left Five teams on Sacict War Craft were selected from a total of 31.

The goal of Sacict War Craft is to encourage youngsters to be more interested in basketry. The young designer Chuthamas commented that the programme is a good start.

"It can be the first step to get the young generation interested in basketry but it will take time to develop. Besides students, local artisans should also watch this programme. They will learn how to apply modern design to handmade products, so their items are accepted more," said Chuthamas.

Vachara commented that people who view the programme will gain new perspectives about Thai crafts.

"They will see how local crafts can become contemporary products and be marketed globally like Korakot. Young people can express their ideas and learn know-how regarding production and marketing from gurus. Sacit has an excellent vision for creating this programme. Due to the show, talented young people will be discovered and they will become resources who continually create products with Sacit. Their excellent products can bring benefit and economic value to the country," said Vachara. 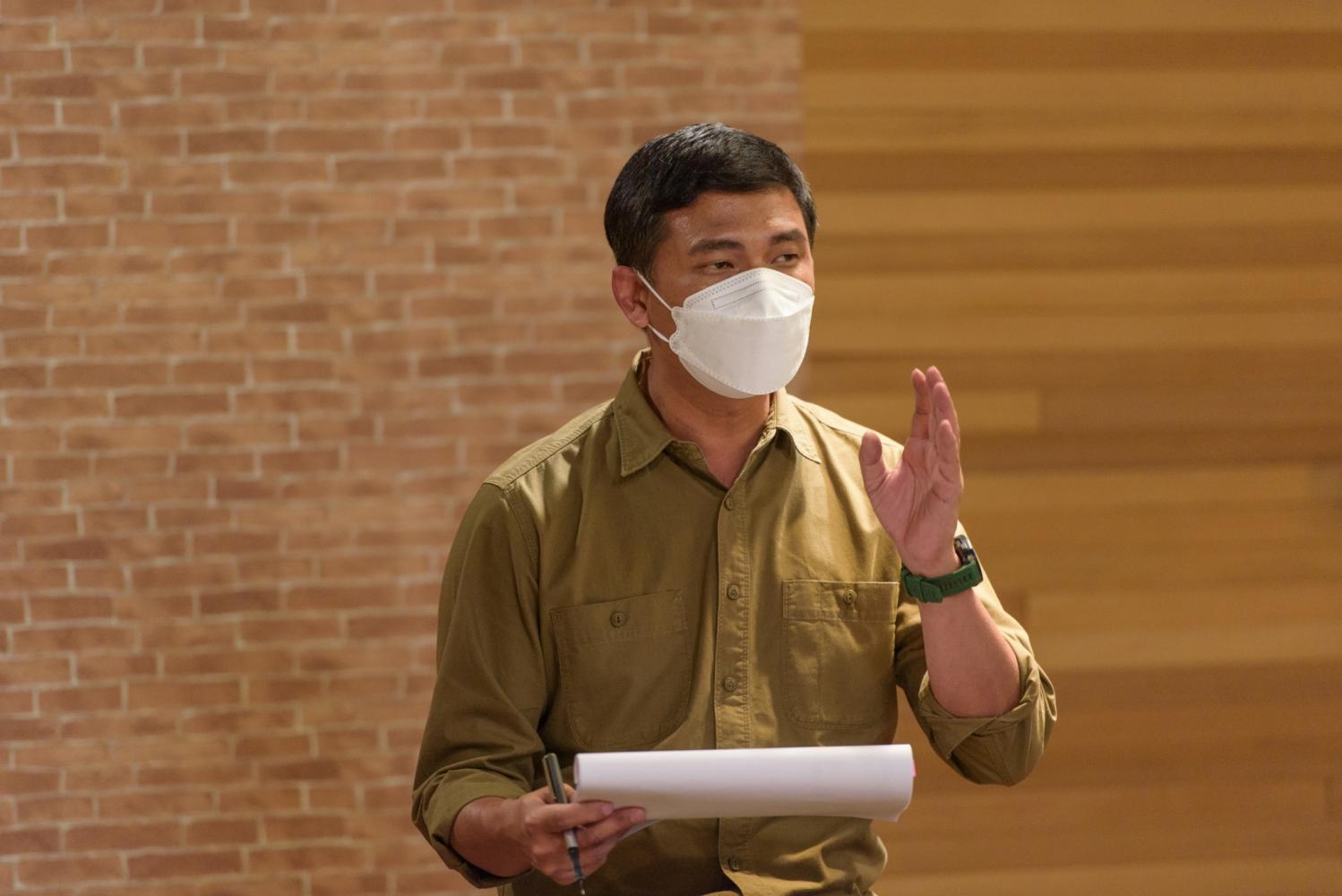