As we get closer to October and Halloween, finding spooky movies to watch with the family isn't so easy. But if you're a fan of horror movies and TV shows like Are You Afraid Of The Dark?, The Twilight Zone or Goosebumps, be sure to check out Nightbooks, a new Netflix dark fantasy about a boy imprisoned by an evil witch in her New York City apartment. The film has gone a bit under the radar even though it's produced by renowned filmmaker Sam Raimi. While Nightbooks is certainly not for young audiences, the 12-year-old inside of me would have absolutely enjoyed this movie.

Directed by David Yarovesky and written by Mikki Daughtry, the film is based on a 2018 horror-fantasy children's book of the same name by J. A. White. Nightbooks follows the story of Alex (Winslow Fegley), a creative boy with a passion for writing scary stories. His room is covered with posters of various horror movies such as The Lost Boys and The People Under The Stairs. But when he's labelled as weird and rejected for who he really is, he swears he'll never write again. But that's when a dark spirit captures him in a different dimension inside his apartment. An evil witch, named Natacha (Krysten Ritter), demands that he tell her a new tale every night if he wants to stay alive. Trapped along with Lenore, the witch's malicious cat that watches his every move, Alex meets Yasmine (Lidya Jewett), another young prisoner who has been there longer than him. In order to survive, Alex must learn to embrace what makes him unique, his love for scary stories, and rewrite his own destiny to break free.

Right off the bat, you know Nightbooks is geared towards families and kids, so there's no graphic violence, sex or things that we see in adult-oriented horror movies. While one might think that the story and characters would be dumbed down for kids, this movie is mature and the characters were quite deep. This is a fairly dark story with lots of strikingly bold colours mixed into it. It's a horror movie and it delivers on that promise. It's the perfect gateway horror movie for families to watch that's scary but not too scary. The visual effects are impressive and the cinematography is spellbinding. The logistics might seem limited to a small apartment but there are doors leading to all kinds of bizarre rooms inspired by boundless imaginations such as a massive library, a neon garden with magical plants, creepy woods with a scary creature, and even an imaginative set of the Brothers Grimm classic tale Hansel And Gretel. 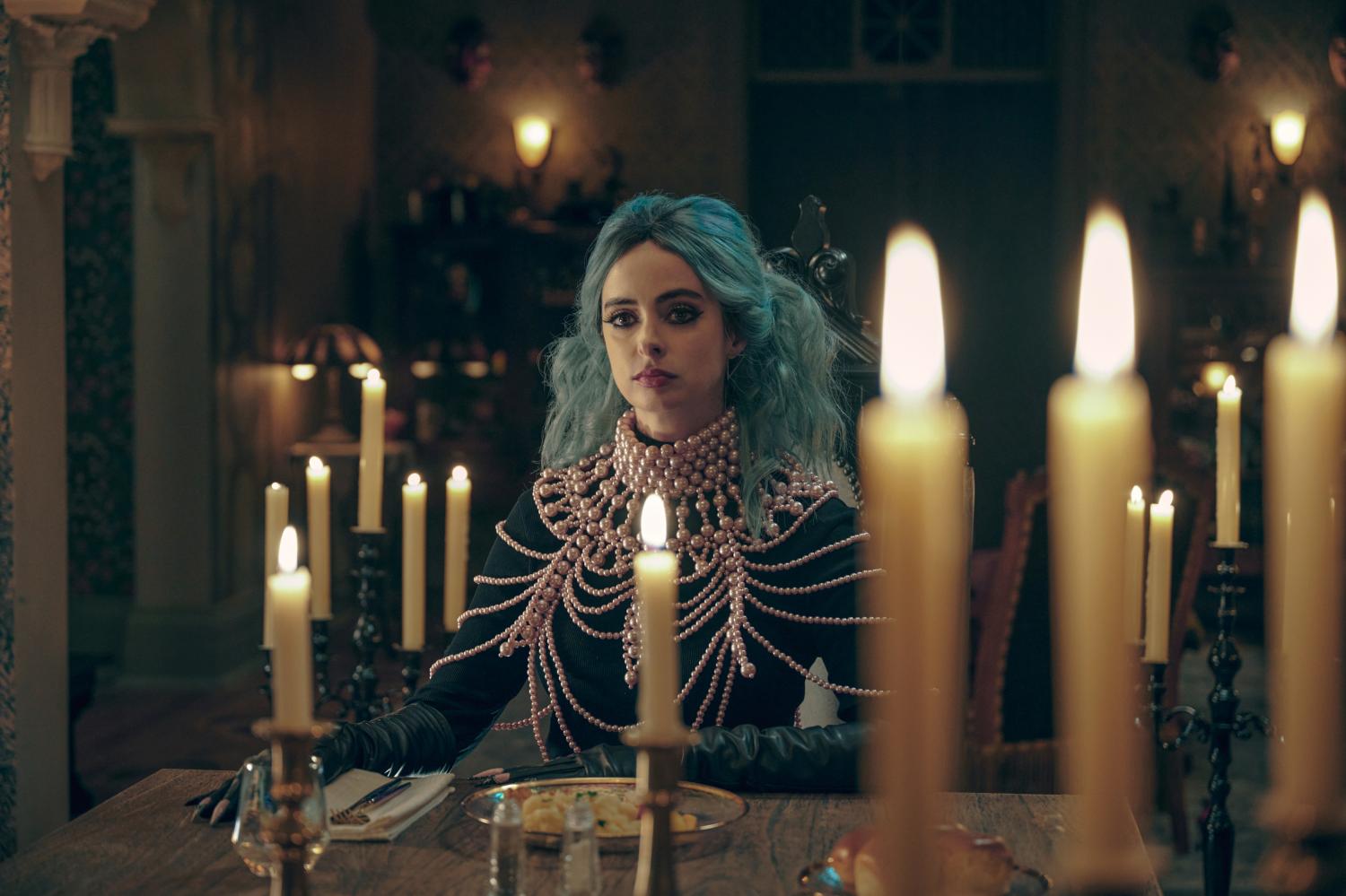 Krysten Ritter as the stylish witch Natacha in Nightbooks.

A film like this rides or dies on its child actors as they have the weight of the entire film on their shoulders. However, 12-year-old actor Fegley is absolutely great in his role. I think Alex makes for a great protagonist and even though he's clearly obsessed with horror stories, you can tell there's something deeper within him that's holding him back from truly expressing himself. I think the way the movie reveals his character as the story progresses was really well done. Yasmin on the other hand is a bit more inconsistent as a character. She tends to go back and forth between being supportive and not supportive of Alex's quest to escape the apartment. Krysten Ritter, who we know from TV series like Breaking Bad (2008) and Marvel's Jessica Jones (2015), has the time of her life playing Natacha. Her performance is deliciously sinister, short-tempered and merciless. Her goth make-up and costume are extravagant and it's fun to see her every time she appears on the screen.

I liked the concept of Alex having to write a new scary story each night or face death. When he tells scary stories, we get visual representations of them in black, white and red which provides noir vibes such as Sin City (2005) and I really enjoyed the way it was executed. It also helps that this movie was produced by Sam Raimi, director of the Evil Dead trilogy that became famous for featuring intense chases. Some of those are also present in Nightbooks as well, especially when Alex and Yasmin are on the run from Natacha. Even though Raimi isn't necessarily the director, his signature camera work is all over this movie.

Nightbooks surprised me by how terrifying it became and will surely scare the heck out of kids, but I still think this is a great movie for families, especially ones with kids in their teens because it mixes just enough fantasy and heart. Despite having a familiar storyline, this is a nice entry into the niche market of scary family-friendly content. 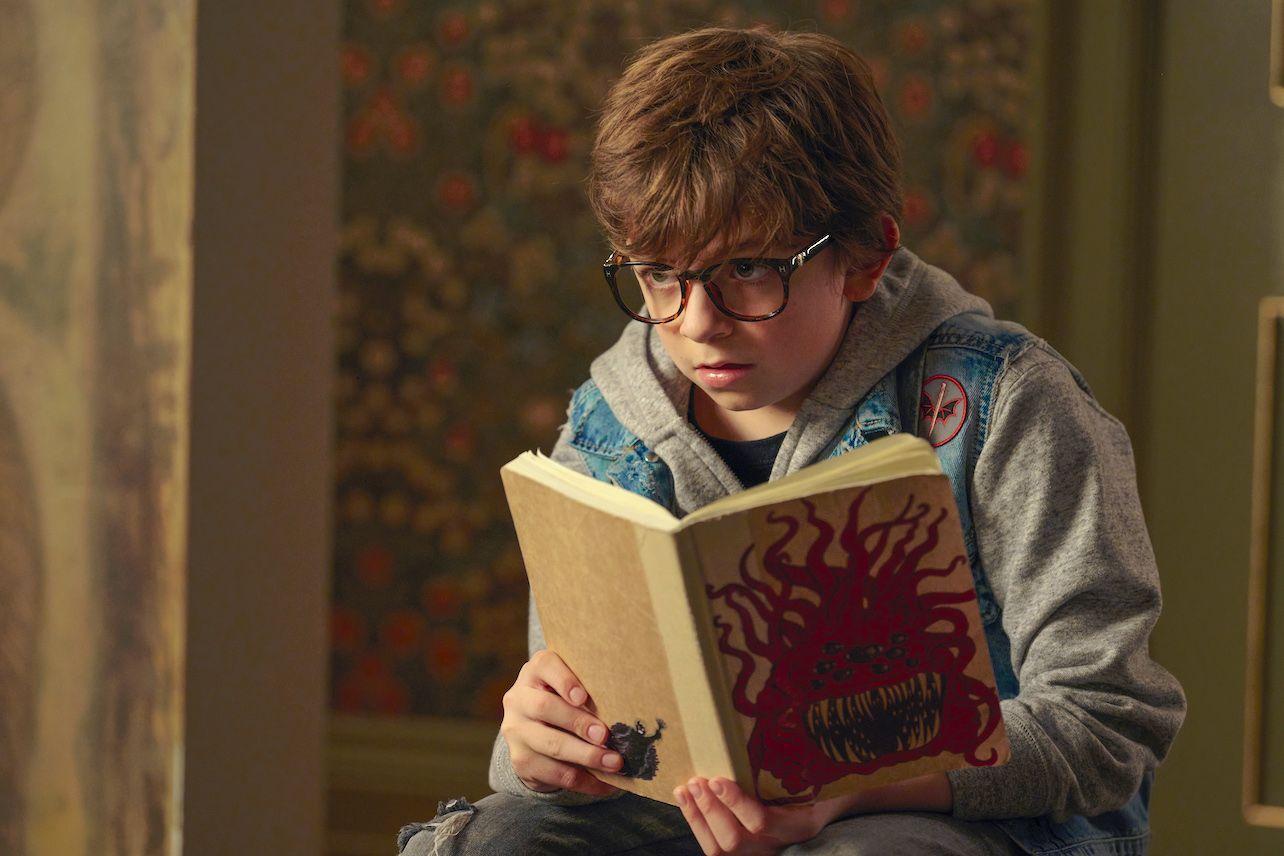