For self-taught photographer Patchara Aunsangchan, life is full of unexpected twists. Three years ago, he bought Siamese fighting fish, or bettas, and posted photos on social media. However, he did not expect the photographs to change his life.

"One photo of the Siamese fighting fish received thousands of shares on social media and the deputy director of the Department of Fisheries also saw it. At that time, he wanted to promote Siamese fighting fish as Thailand's national aquatic animal. He contacted me asking permission to use the photo and if I wanted to help him with a photo book titled Siamese Fighting Fish: The National Aquatic Animal," said Patchara.

Before Patchara became known for photos of Siamese fighting fish, he worked in various different fields, from fashion and news to sports and nudity. After he decided to work on Siamese fighting fish, he spent day and night with the fish in order to understand their behaviour, so he could capture their unique movements. Besides the photography book launched by the Department of Fisheries, Patchara's photographs were also selected by Thailand Post to be part of a stamp collection. 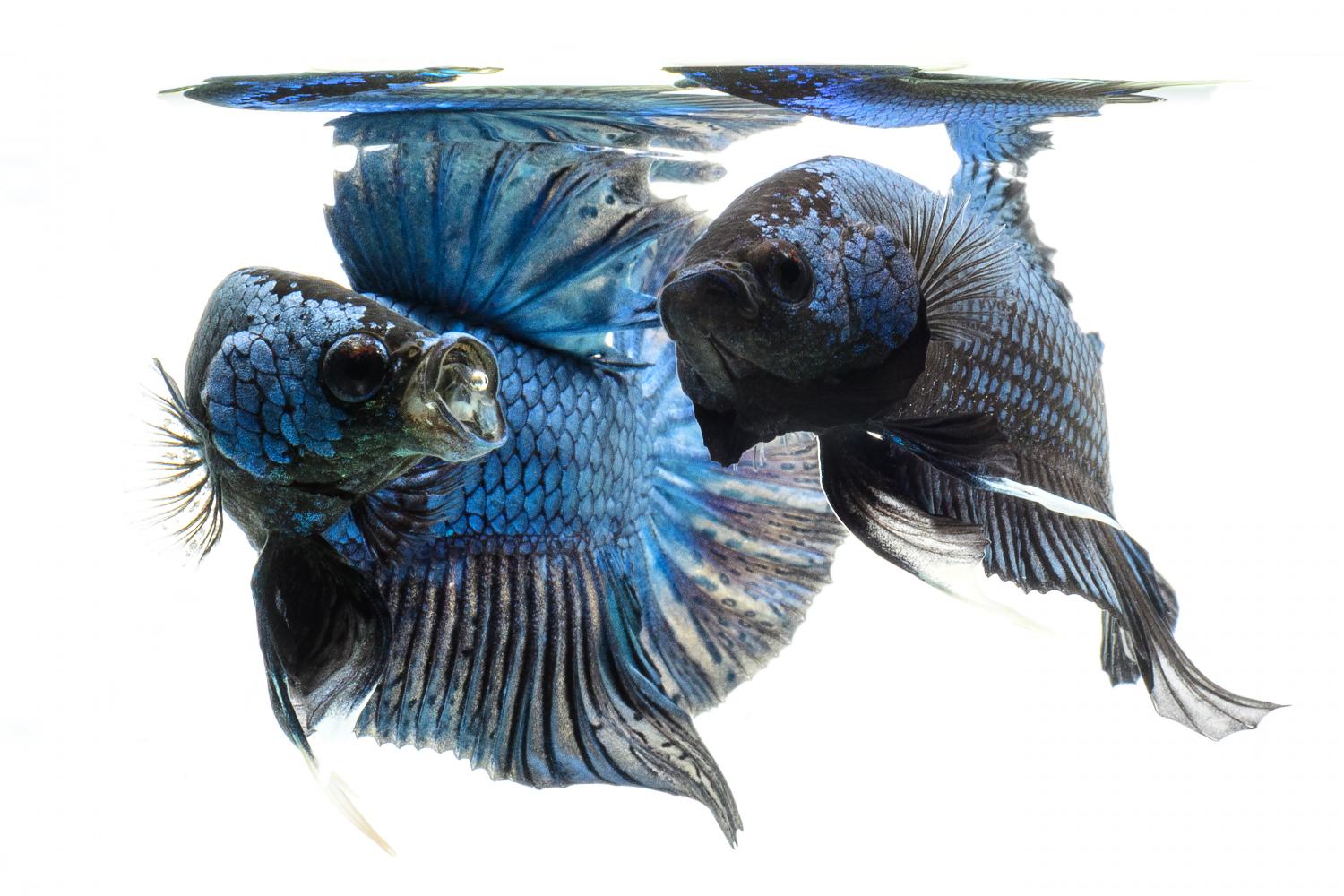 The movements and actions captured in the photographs happened before two fish began to fight. Patchara said he had less than three minutes to capture the moment. However, to be able to take such photos, many prior preparations had to be made.

"Unlike working with models, I cannot communicate with fish. The only thing I can do is learn about them. Each breed swims differently and responds to the atmosphere differently. I had to prepare the fish for the conditions I would capture photos so that they were comfortable. Some fish do not fight because one swims away, so there was no action. I had to put two fish that lived in separate jars next to each other and observe their interactions before putting them together in one jar. I observed which area in the tank the fish liked to swim and set the lighting to accompany their movements. Every photograph was difficult to capture and each moment would never repeat itself," said Patchara.

After spending about three years with Siamese fighting fish, Patchara has discovered some information that most people do not know.

"Siamese fighting fish can live together without fighting if they grow up in the same tank. However, if we separate them into another tank or change the water and put them back together, they will suddenly not remember each other and fight. Also, 80% of them are scared of the super red betta. They swim away when a super red betta is put in the tank," said Patchara. 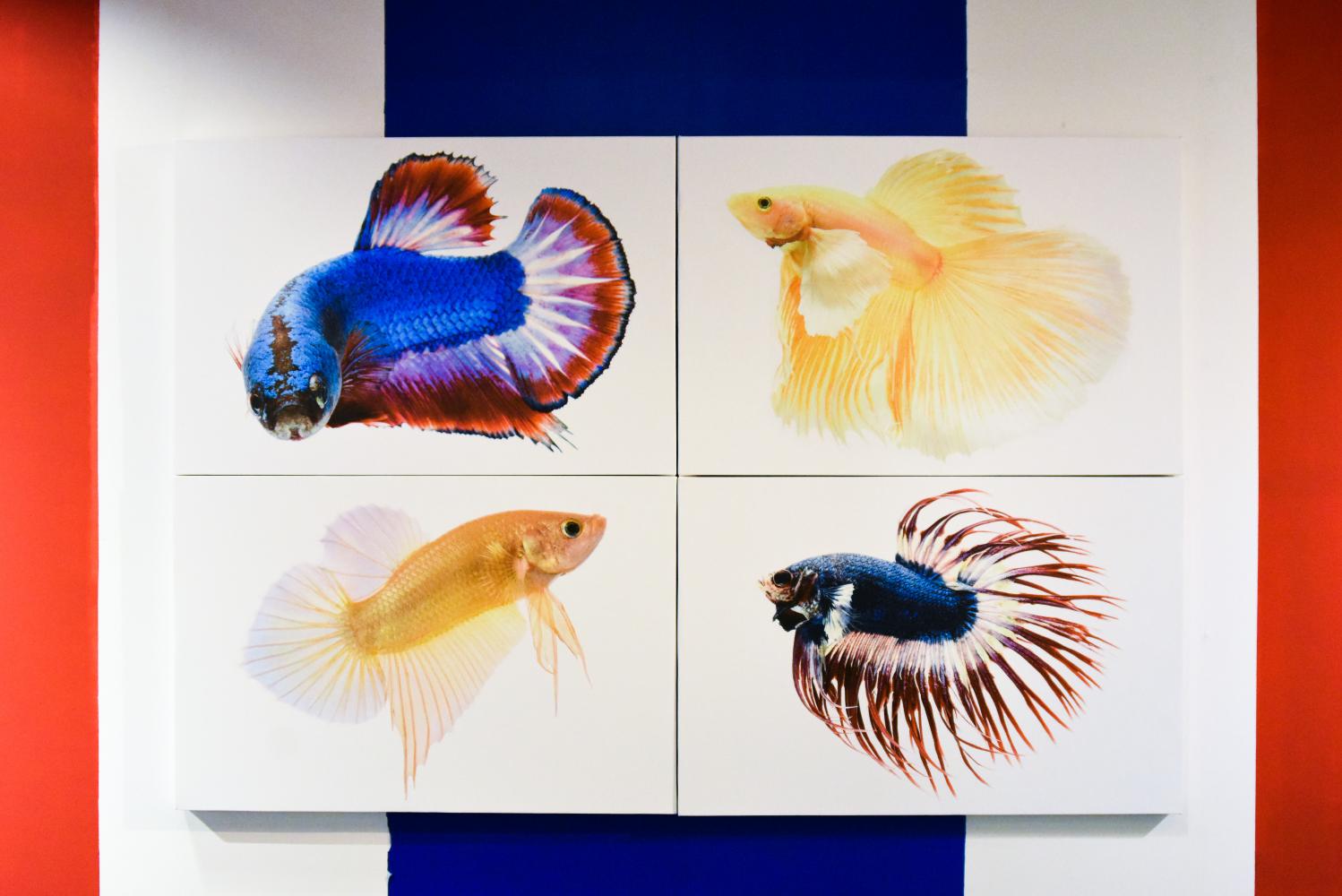 Two other types of fish, the Thai flag crowntail betta and the Thai flag betta whose photographs have been made into a stamp collection, also feature at the exhibition. These fish are unique with three colours of the Thai national flag -- red, white and blue.

"It is rare to have fish with three clear separate colours like these two breeds. One of them took a fish breeder five years to develop and the other took 10 years," he said.

"This fish has a copper colour but viewers see different shades under different lighting conditions. When it swims, the colours on its scales alternate from red and blue to green, yellow, gold and black," he said.

Most photographs at the exhibition are published with an HD metal print technique that sublimates colours onto metal and coats them. The colours on the HD metal print are vivid and durable.

"Images on HD metal print can last 30 to 40 years. Many companies claim these kinds of images can last for a century if stored properly. HD metal print photographs can withstand heat and humidity and be easily cleaned with a glass cleaning solution. Photos of fish on HD metal print also look better than canvas because they highlight the shiny fish scales which canvas cannot," said the photographer.

Patchara found that working on Siamese fighting fish photos for so long has changed his personality.

"While working, many factors were out of my control. I learned to become calmer and to let things go after the fish died. Siamese fighting fish have a short lifespan. I initially named the fish but after they all died, I just called them by numbers," said Patchara. 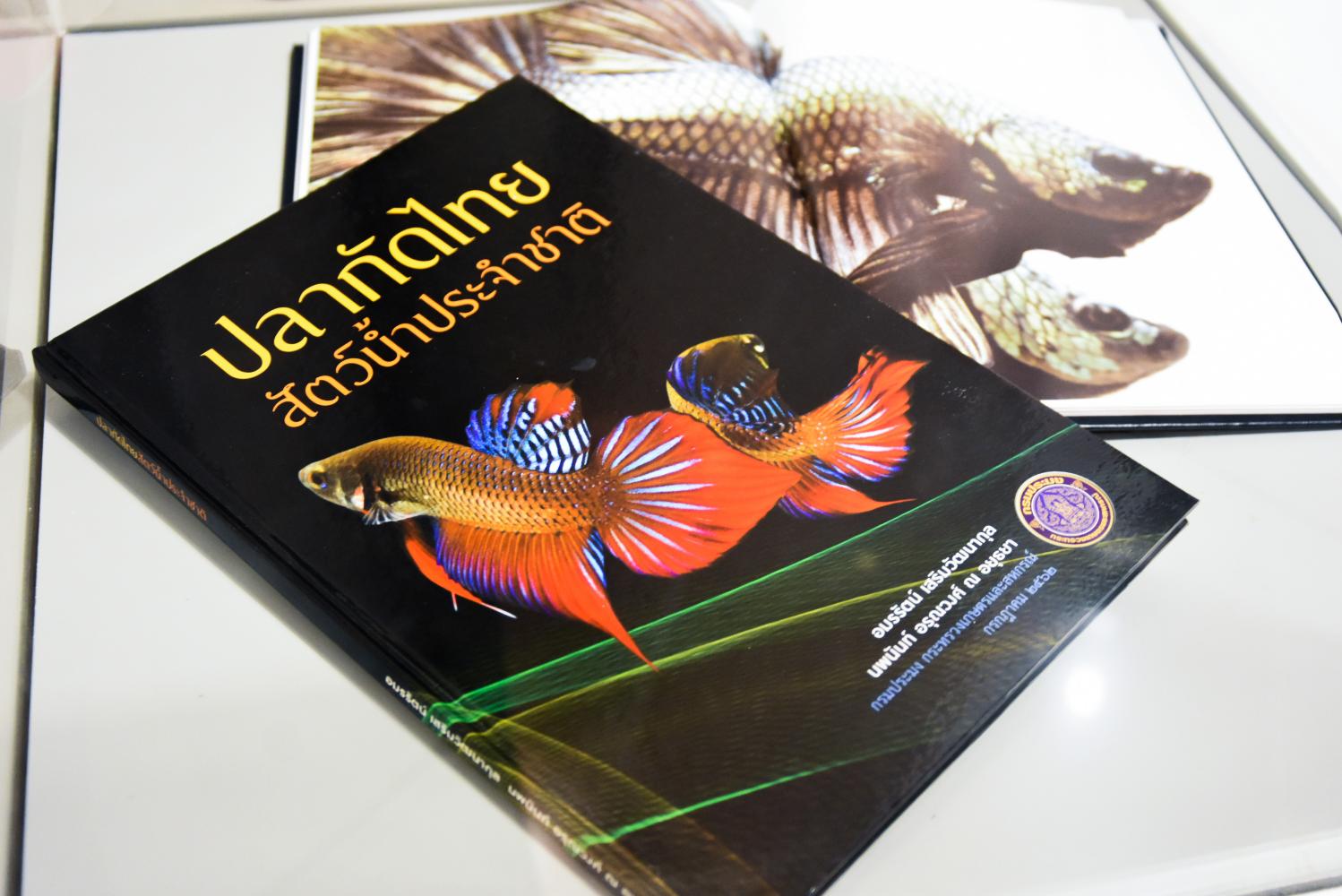 Patchara worked on a photography book for the Department of Fisheries. River City Bangkok

Patchara works on other types of photograph but he became passionate about Siamese fighting fish when he discovered that his work could change the quality of a fish breeder's life.

"Two years ago, my photographs were featured at 'The Golden Betta Photo Auction' which was part of the 'Pramong Nomklao Fair', organised by the Fisheries Department. The golden bettas that I took photos of were provided by the Fisheries Department. A farmer and fish breeder went to see photographs at the auction and told me that he recognised the photo of his betta since it was the most beautiful golden betta that he had. He thanked me for making his betta become known publicly. After that photograph was released, many people contacted him to purchase his bettas. He said I played a part in helping improve the quality of his life. I was impressed and touched to know that I could make an impact on someone's life," said the photographer.

Hanging from the ceiling as part of "The Tail Stories", there are three huge banners with images of Siamese fighting fish. Patchara said he aims to contribute images of the fish to several products.

"I would like to see images of Siamese fighting fish on other materials such as garments, porcelain, mirrors or pottery, so they could appear on products such as scarfs, stained glass or bathroom tiles. Today's technology can create vivid images on these materials and products. I wish more people could see the beautiful Siamese fighting fish," said Patchara.

"The Tail Stories" runs until Oct 24 at Room 254, 2nd floor River City, River City Bangkok. Admission is free. The online exhibition can be viewed at tinyurl.com/srkf7zy6. Visit rivercitybangkok.com or Facebook/RiverCityBangkok for more information. 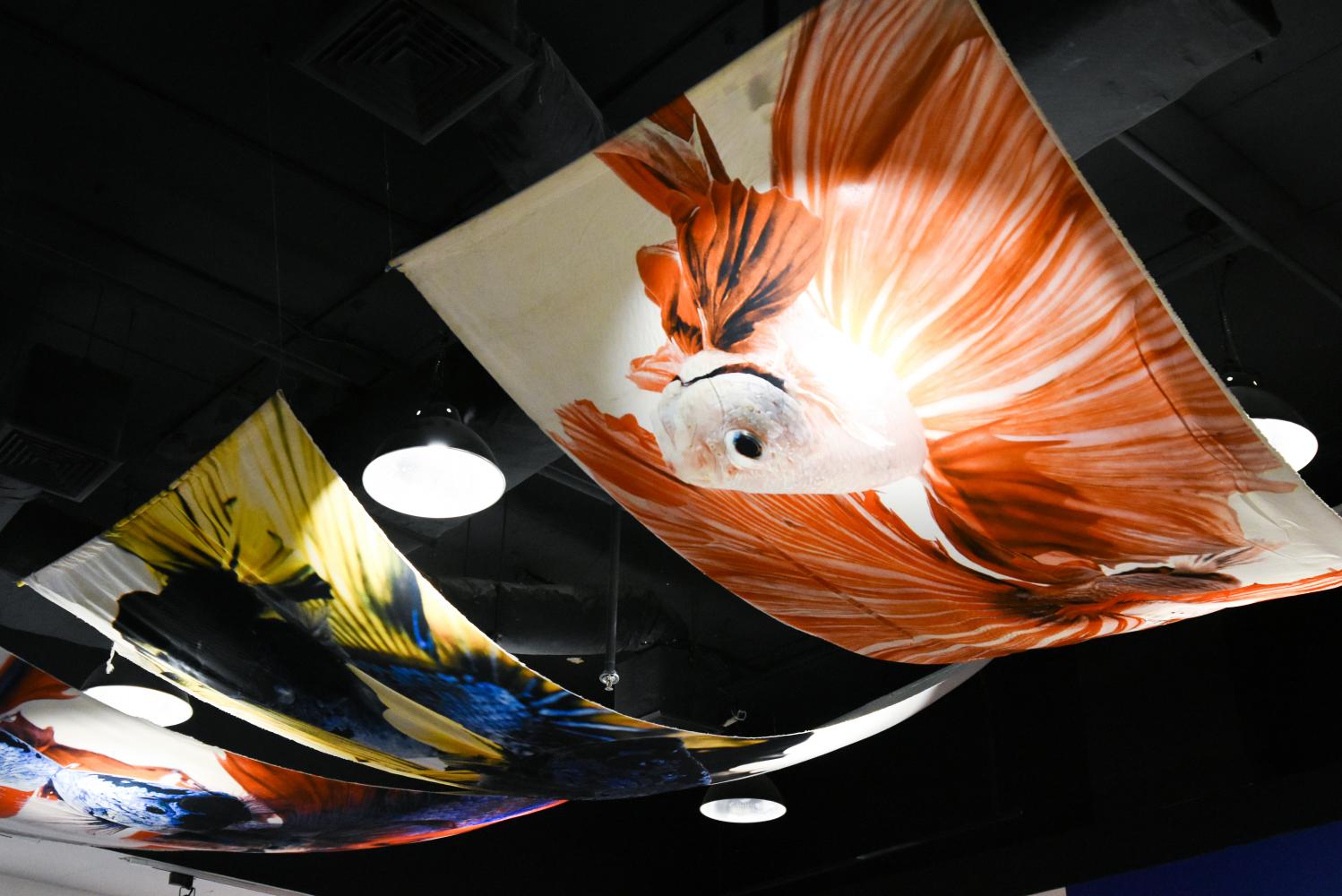