"The exhibition is a tribute to my father who was a farmer in Shantou, China. He told me that farmers there were very poor, so he and his siblings tried to find a new country to live in. They escaped to Thailand. My father inspired me to find more information about my roots and discover how agriculture has changed over 70 to 80 years," said Pichai.

Now on view at SAC Gallery, "A Disproportionate Burden" conveys the stress and pressure that agriculturists experience. When I spoke to agriculturists, I could feel they were not happy. All of them had the same sad expression on their faces and I could feel their misery. They have to use agrochemicals as demanded by capitalists and are limited by uncertain weather conditions. Most do not want to use agrochemicals but if their vegetables and fruits have holes and worms, no one will buy them. Hence, I want to portray their frustrations," said Pichai. 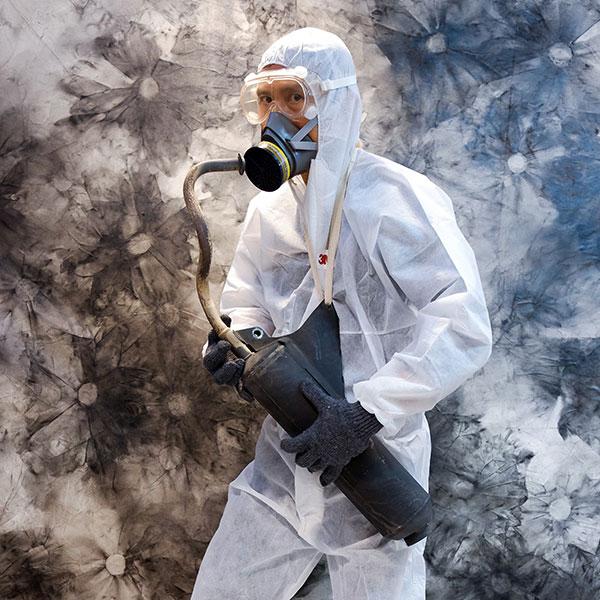 Pichai Pongsasaovapark created A Disproportionate Burden as a tribute to his father. SAC Gallery

When Pichai began researching for this collection, he attended a seminar about three agrochemicals -- paraquat, glyphosate and chlorpyrifos. Soon after, paraquat and chlorpyrifos were banned. The seminar provided information that supported the use of these toxic agrochemicals. In order to find the other side of the story, the artist decided to meet agriculturists in Phitsanulok, Chiang Rai and Mae Hong Son.

In Phitsanulok, Pichai met two chemistry lecturers at Naresuan University who invented a test kit for agriculturists to check the presence of toxic agrochemicals in vegetables and fruits. The result from the test kit shows different shades of blue, from light blue to dark blue. Light blue means fewer farm chemicals while dark blue means a heavy presence of toxic chemicals. If agriculturists note their produce contains too many chemicals, they can decide not to sell. When Pichai used the test kit on vegetables he bought from the local market, the colour was medium blue, meaning the vegetables contained chemical residue.

When Pichai visited Mae Hong Son, he was stunned to find many mountains had started cultivating fruits and vegetables to market to Bangkokians.

"Trees on mountains were cut off to grow vegetables such as chillies, eggplant and cabbages. I was surprised to see terrace cultivation there because the area is far away from the capital. I also wonder if city people consume that much," he said. 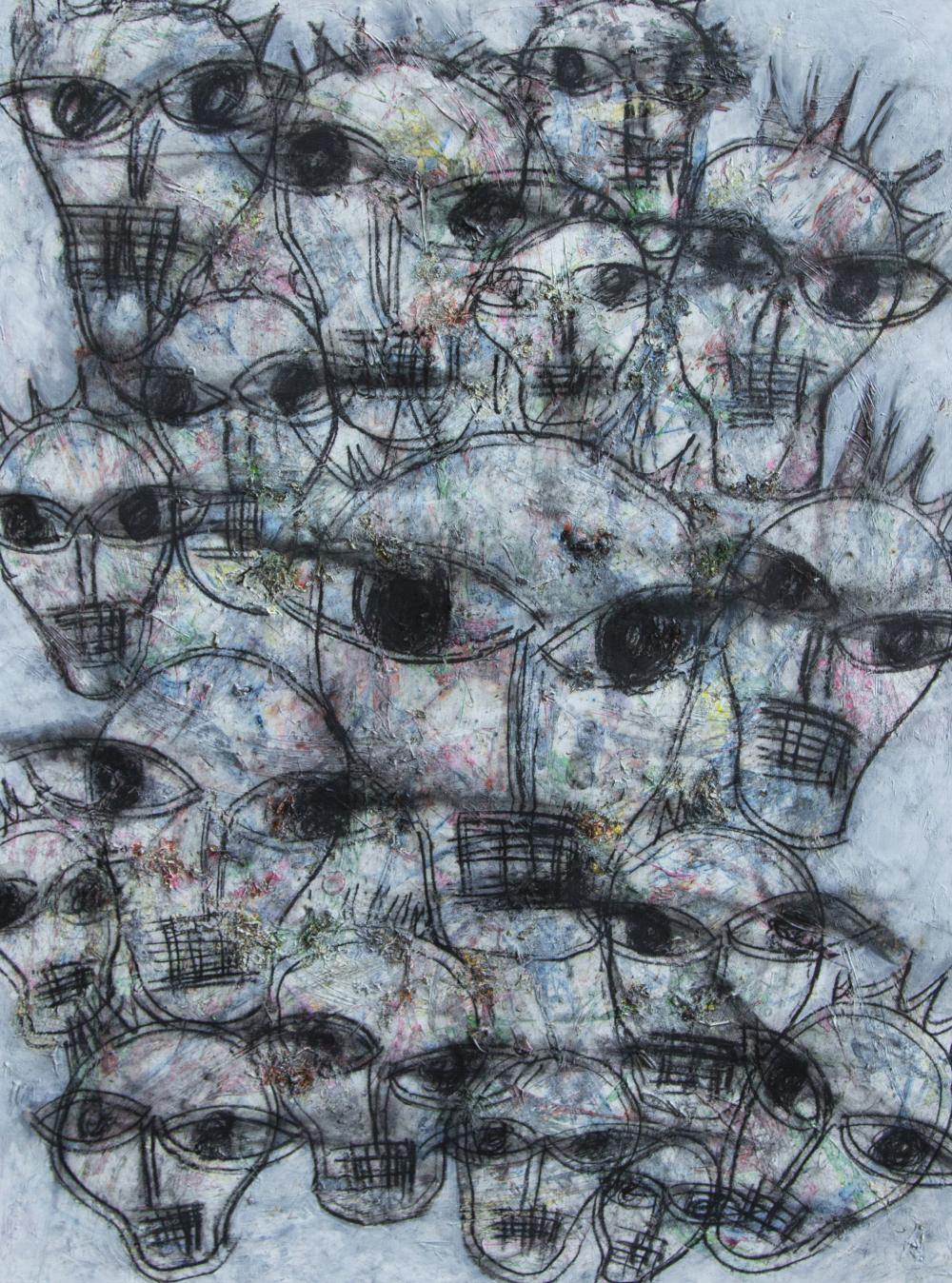 A Disproportionate Burden #23 was inspired by farmers and depicts miserable faces. SAC Gallery

After visiting many farms, Pichai learned that agriculturists do not consume the produce they sell.

"They have separate farming for themselves. In Mae Hong Son, gardeners told me that they do not eat vegetables that they market. They also joked that they once fed their pigs the vegetables they sold. A few days later, the pigs died," said Pichai.

Even though agriculturists realise that farm chemicals are hazardous, some of them do not wear protective gear while using pesticides or herbicides. 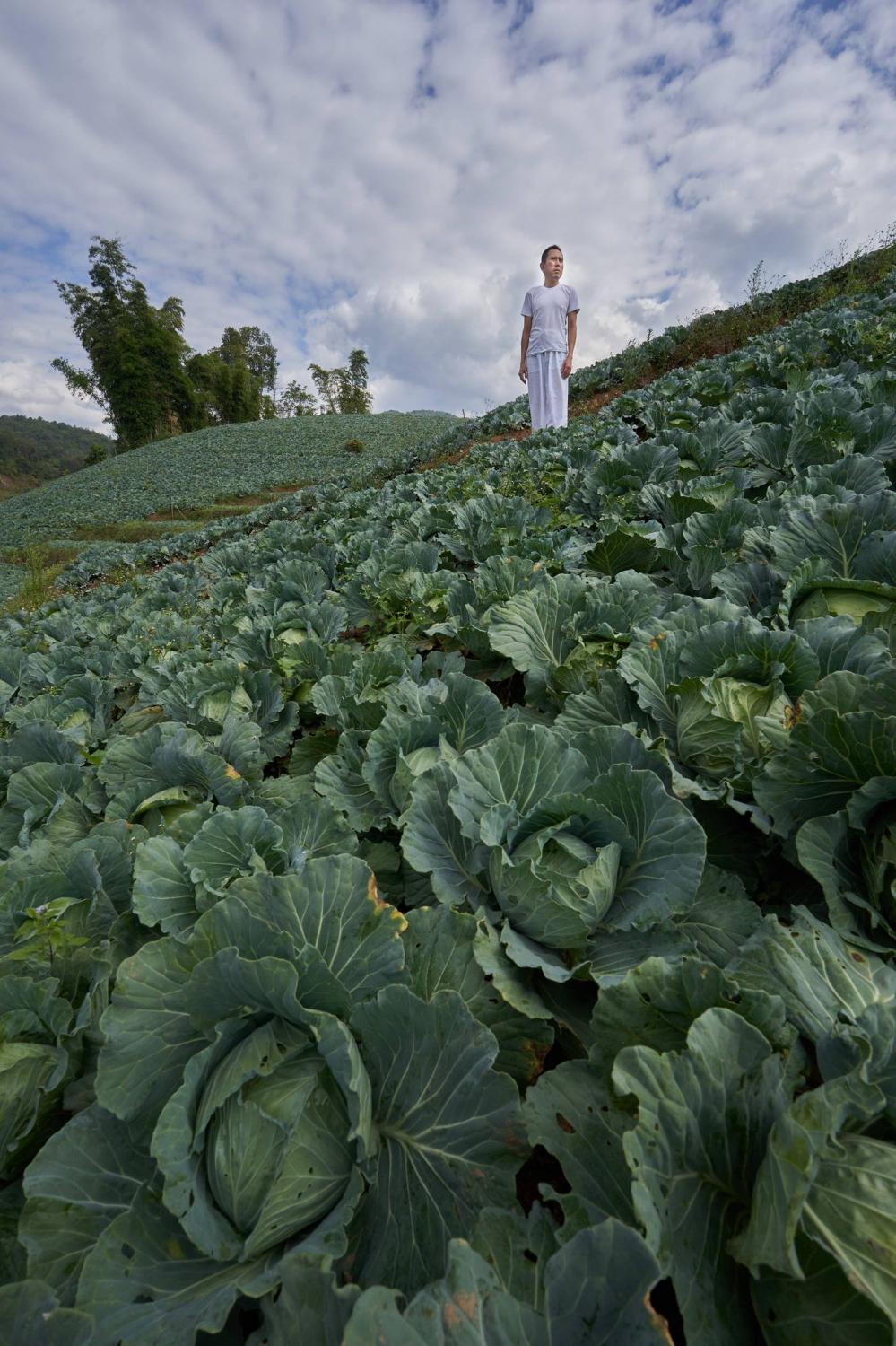 "Some only wear a cloth face mask and a hat while using farm chemicals. When I asked him why he did not use a protective mask and gear, he told me the protective suit was hot and uncomfortable. He could not wear the suit to work on his farm that stretches over five rai. As a result, many agriculturists have respiratory diseases and other illnesses. One farmer lost his leg because he had a small wound and paraquat got through even though he was wearing boots," said the artist.

Painted on a 10m canvas installation, Under Pressure, was created by a 10-tonne road roller that ran over painted sugar canes. The installation was showcased for the first time at the exhibition, "Art For Air", in Chiang Mai about air pollution. Pichai explained that in 2017, the government used a road roller to crush pirated merchandise that violated intellectual property and he used a road roller as a symbol.

"Burning sugar cane is a cause of air pollution, but agriculturists have to do it because they cannot afford labour to cut sugar canes. In order to create this installation, I drove a road roller over painted sugar canes several times to signify the pressure agriculturists feel. It also symbolises the government's double standards. While the government bans other pirated merchandise, illegal farm chemicals can be easily imported and sold," explained Pichai.

Several paintings such as A Disproportionate Burden #4, #5, #6, #7, #8 and #9 were created by smashing botanicals mixed with oil paint on mulberry paper. Smashing by a hammer is a symbol of the pressure experienced by agriculturists. 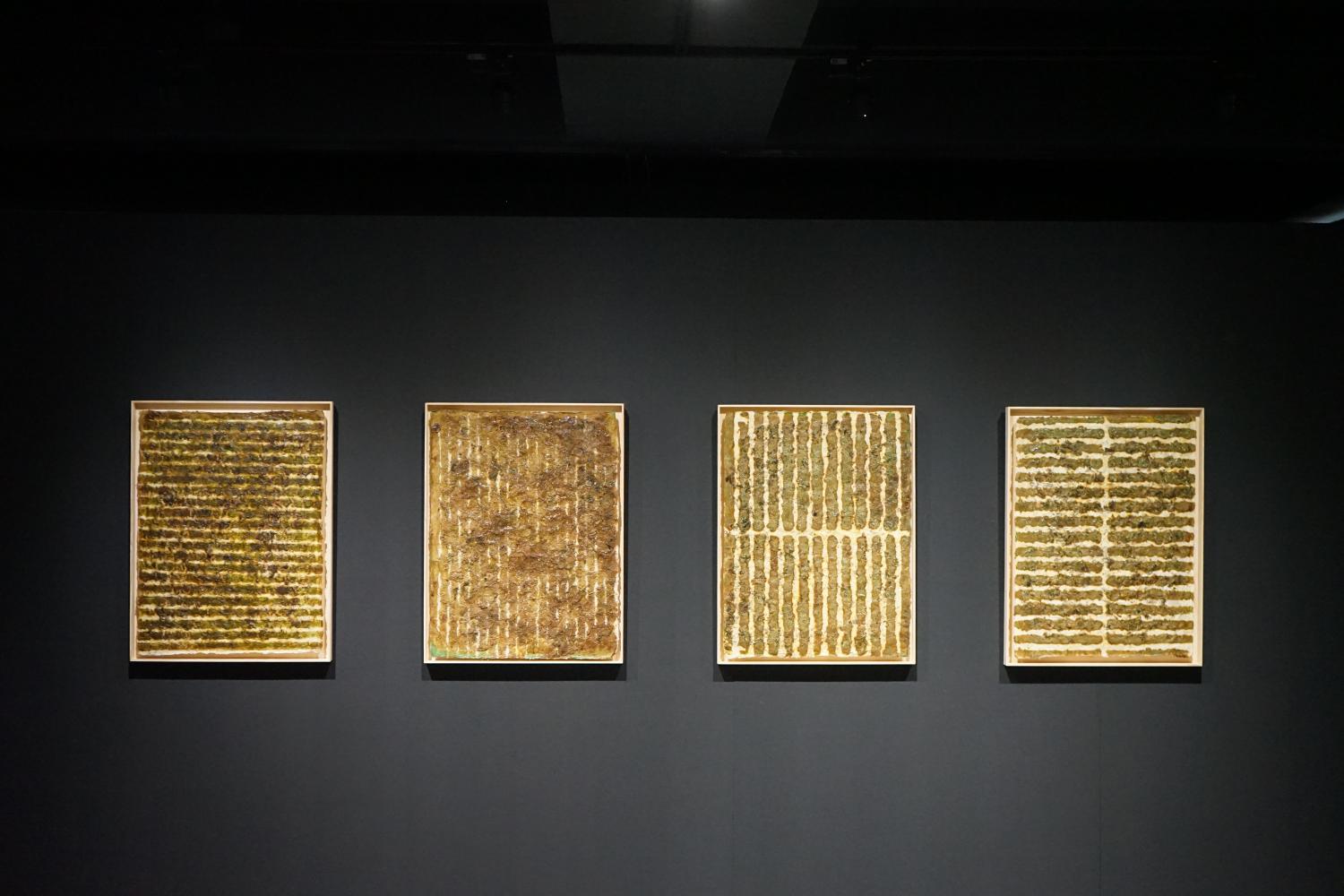 A Disproportionate Burden #17, #18, #20 and #19 were painted using the toxic herbicide paraquat. SAC Gallery

"Before using a road roller, I began with hammer smashing which puts less pressure compared to a road roller. This is similar to the pressure that agriculturists feel. At first, they are not aware of it but the pressure builds up to become a burden. They use toxic chemicals for years and only after they are hospitalised or have cancer or lose their leg do they realise that farm chemicals are hazardous," he explained.

A Disproportionate Burden #16, #17, #18, #19 and #20 are the highlights of the exhibition since Pichai created the painting by exposing himself to the toxic herbicide, paraquat. The paintings provide a bird's-eye view of rice fields.

"I am not a daring person, but I want the exhibition to convey the pain agriculturists endure. If I have no experience of pain, how I can create art that expresses it. I wore a mask, dipped a paintbrush into a bottle of paraquat and painted on mulberry paper. It was like you can be hurt by what you cannot see. After a while, I could not breathe and had to call my friend to take me to the hospital. That was only the first piece. I worked on four other pieces and had to see a doctor again. It was worth it to learn about the hazards of herbicide. I worked on only five pieces before it became unbearable. Agriculturists have to use toxic chemicals every day. How can they manage?"

Pichai tackles consumerism by using the stock market section from newspapers to create collages for Disproportionate Burden #25, #26, #27, #28 and #29. He explained that capitalism makes people embrace consumerism, so they want everything that is convenient and best for them. 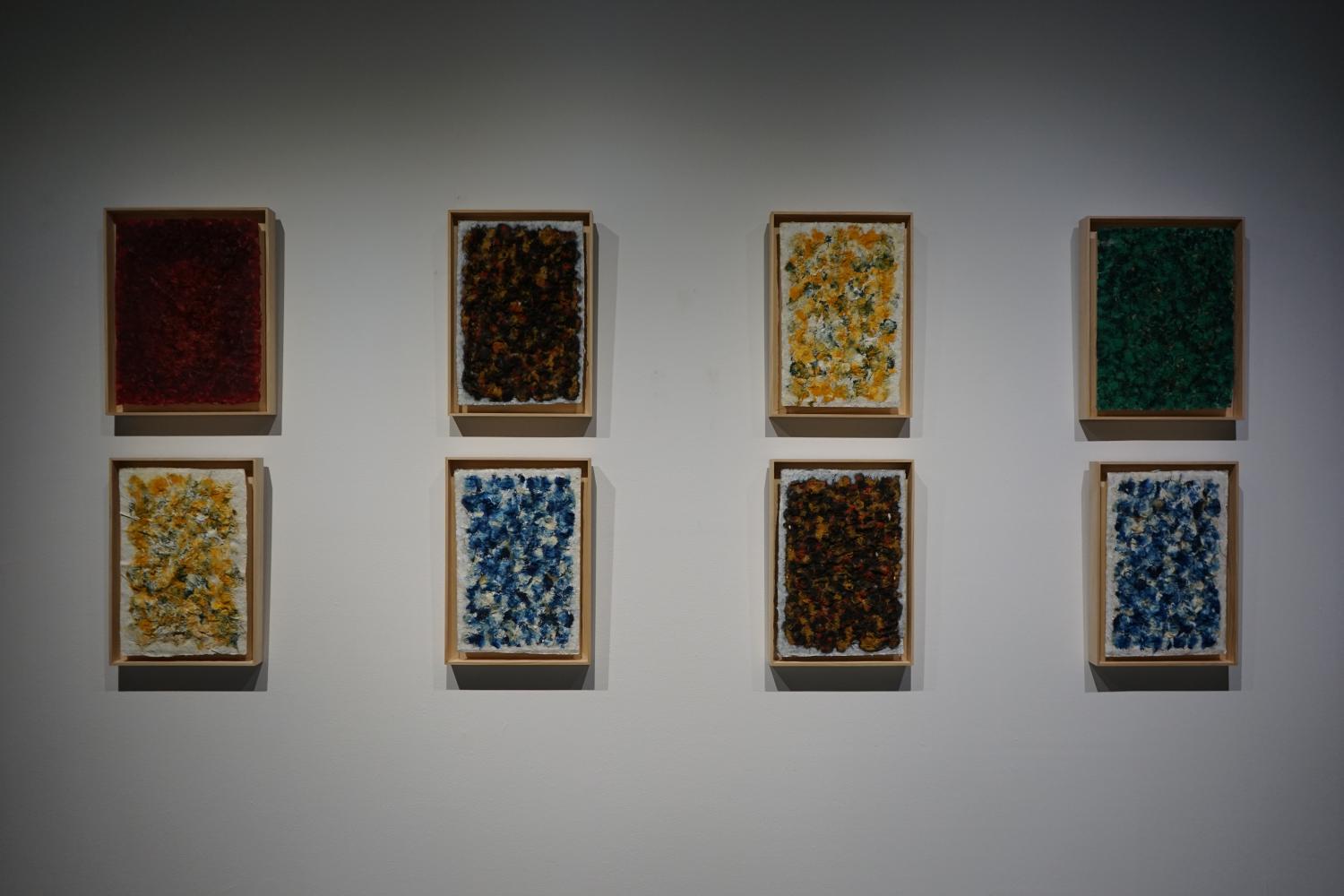 "Everyone wants to purchase beautiful and colourful fruits and vegetables, so markets must serve people with fresh and unblemished produce. If not, people will not purchase them, so consumers are the major reason why agriculturists use farm chemicals," said Pichai.

After working on the project, the artist found that agricultural careers have not changed much from 70 or 80 years ago.

"It is sad. Agriculturists grow crops to feed people all over the country but they are under pressure and still poor while many other things in the country have developed. The government does not even protect them from illegal farm chemicals," said Pichai.

Even though Pichai feels sad for agriculturists, his exhibition expresses both desperation and hope. He believes it is important to have hope. 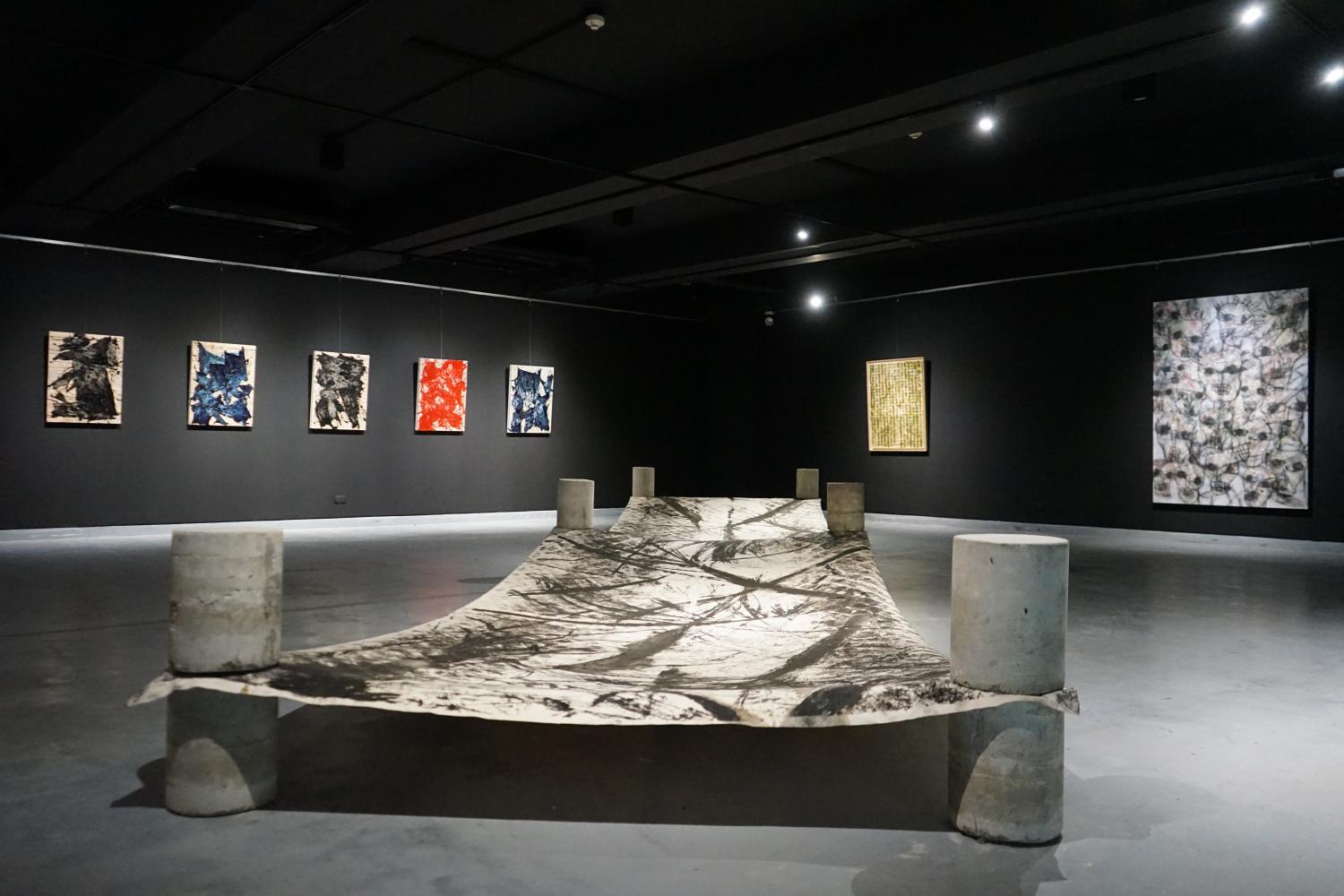 Under Pressure was created by using a 10-tonne road roller to run over painted sugar canes. SAC Gallery

"If an agriculturist begins to do something to change his career, it is the first step. I do not want them to surrender to their situation. I also hope viewers will empathise with agriculturists and share their plight. If people are aware of consumerism, it may help them to understand the problems agriculturists face and appreciate their importance," said Pichai.