Both artists said they participated in the competition because they were intrigued by the theme, however, they did not expect to win. Ladakorn, an art student at the Faculty of Painting Sculpture and Graphic Arts, Silpakorn University, said it was her first time participating in The White Elephant Art Award. After winning the first prize, Ladakorn felt overwhelmed.

"I thought that at best, I'd get a consolation prize. When I submitted my entry, I saw the quality of other participants, so I did not expect to win the White Elephant Prize at all. After learning the result, I felt overwhelmed and broke down in tears. My mother was with me and she was surprised by my reaction," said Ladakorn of the competition organised by Thai Beverage. 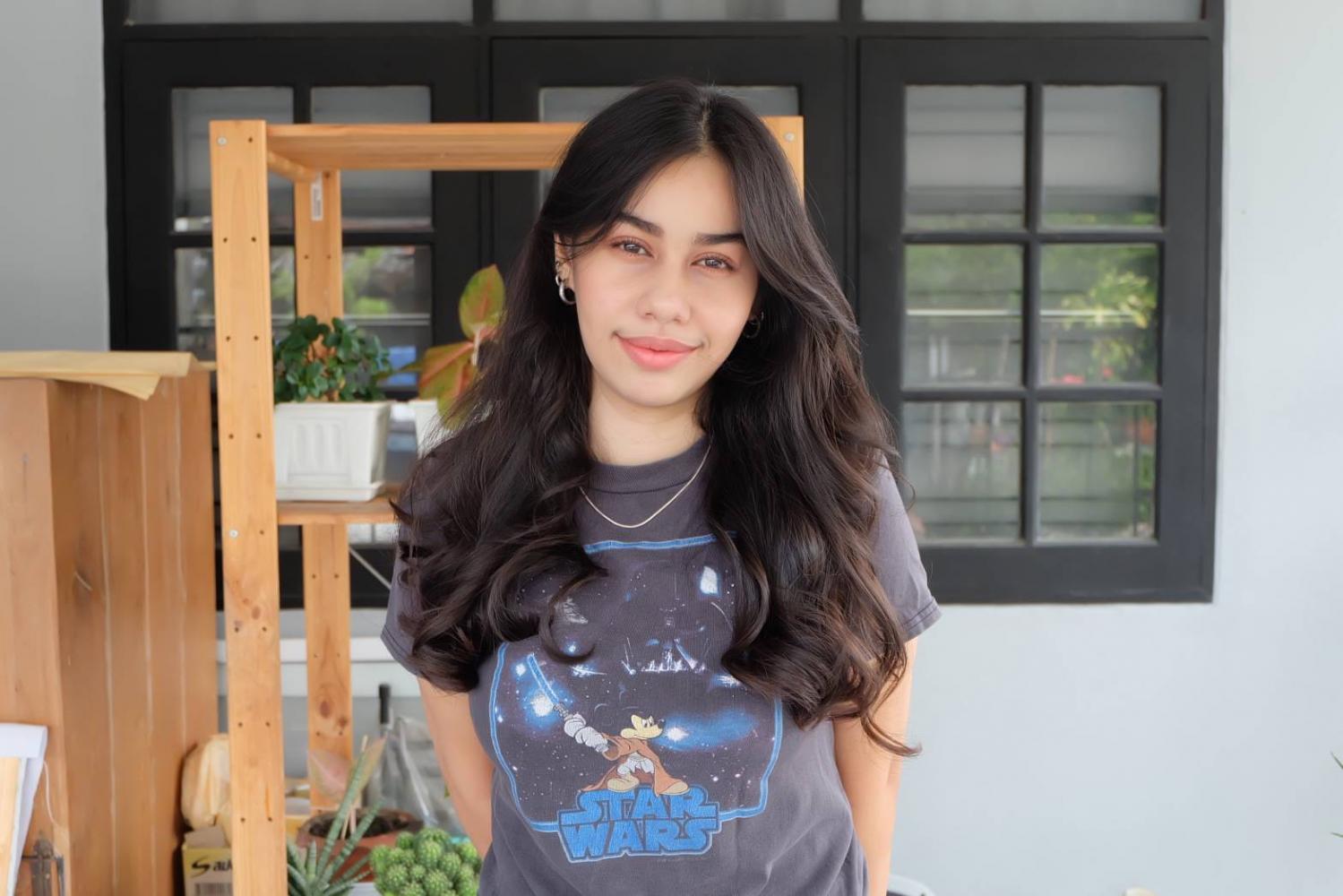 "I almost cried when I received the first prize in 2017 because I had never won a big award like that before. This year, I did not expect much because I have participated in the competition many times already, so I do not regret winning the second prize," said Nilraya.

Life spoke to Ladakorn and Nilraya about their award-winning artworks and their dreams as artists.

Ladakorn is a graduate student from the Faculty of Painting Sculpture and Graphic Arts, Silpakorn University. Swimming In Her Dreams is an etching she created for her thesis titled "The Imagery Of My Mother Together With My Imagination".

"I created many sketches for my thesis. However, when I saw that the theme of the White Elephant competition was 'Dream', I thought my thesis which focuses on fantasy was appropriate for the competition," said Ladakorn.

Ladakorn is influenced by surreal artist Jaco Putker and horror manga artist, Junji Ito, so Swimming In Her Dreams features surrealism with the use of bizarre and symbolic objects and a dreamlike atmosphere. The young artist explained that Swimming In Her Dreams was inspired by the imaginings of her mother and herself.

"I live with my 96-year-old mother who sometimes visualises things. For example, one rainy day, my mother walked around the house at night. She told me there were many snails eating our house. So, I asked her to draw pictures for me and I developed them into sketches and later into etching pieces," said Ladakorn. 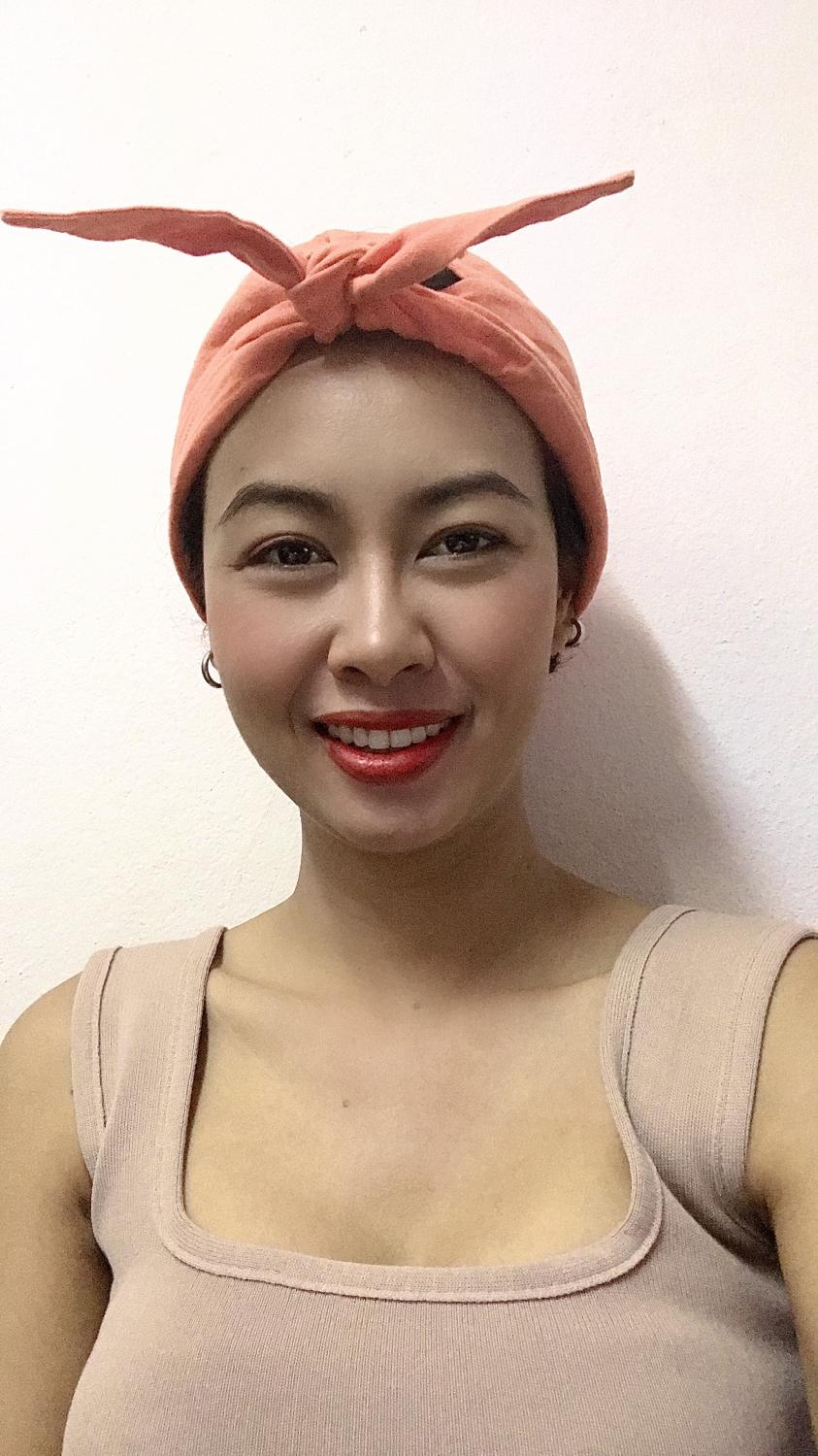 Swimming In Her Dreams depicts a greenhouse that looks like a comfy living space but it features bizarre objects such as a flying whale and multicoloured mushrooms with big eyes.

"This artwork represents my mother's imagination which inspired me to create art. Many objects signify my mother and me. The two moons mean my mother and I can see each other each day and night. Meanwhile, the mushrooms represent me since I was an orphan and adopted by my mother. I compare myself to mushrooms that grow from spores that fell into fertile soil. This is similar to how my mother adopted me and has taken care of me with love. The eyes on the mushrooms signify my eyes that keep watch on my mother. Whatever ideas she expresses, I am the one who understands," explained Ladakorn.

After winning 1 million baht in prize money, Ladakorn dreams of running a small printmaking studio, so she can continually work on art. 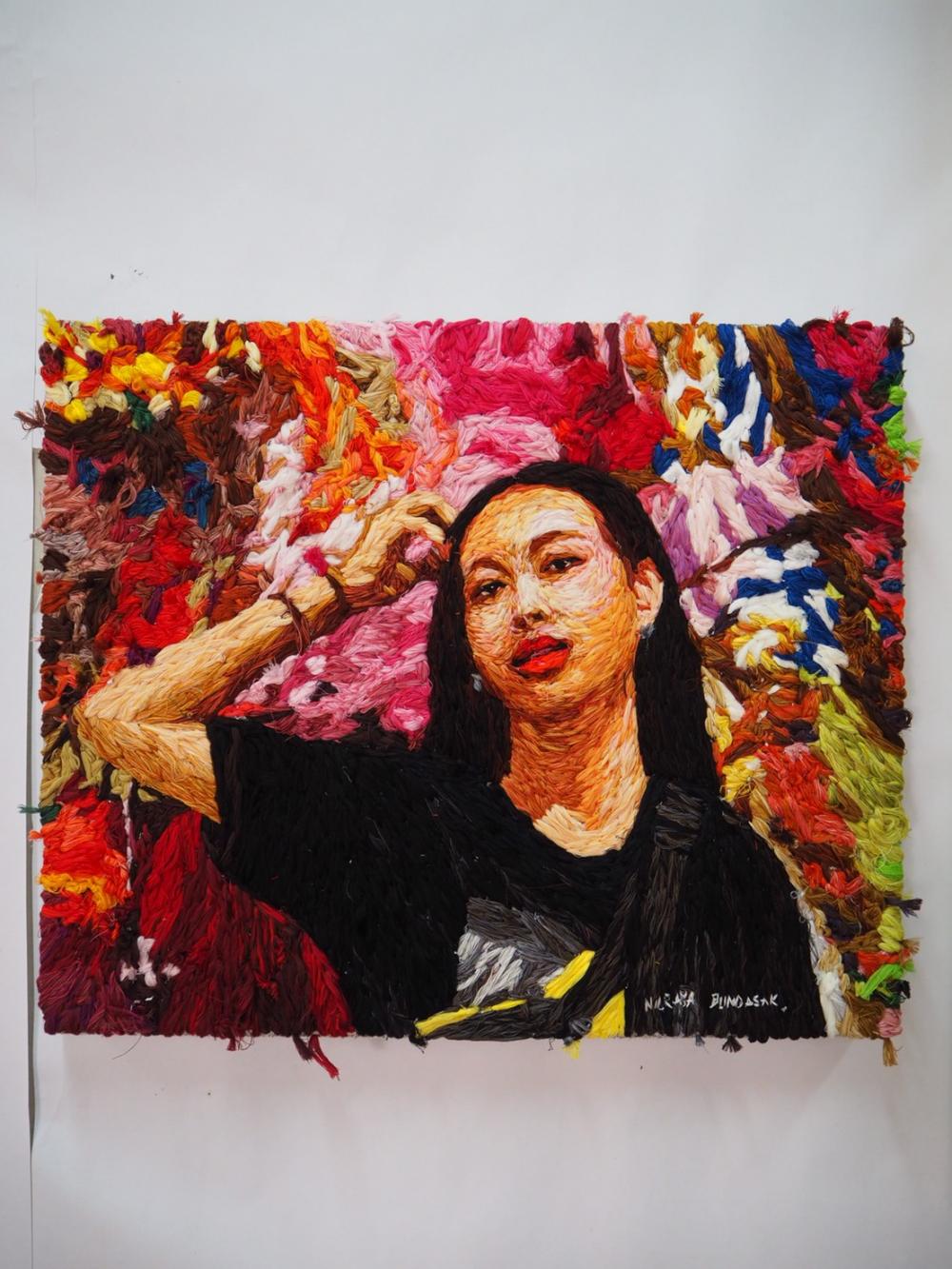 "I hope I can arrange workshops for people interested in art. My mother likes to garden, so I am thinking of creating natural colours from plants and flowers as well as recycled handmade paper. I made paper from fabrics taken from my mother's old clothes and it looks intriguing since it includes personal items," said Ladakorn.

Each artist has a different purpose for creating art. As an artist and a daughter, Ladakorn works on art in order to stay close to her mother.

"Since my mother is now 96 and has a limited number of years left, I want to create art based on her stories and I do it for the relationship between my mother and me," said Ladakorn.

Nilraya earned her master's degree from the Faculty of Painting Sculpture and Graphic Arts, Silpakorn University. Even though Nilraya studied painting, she stood out due to her embroidery work, which she learned from her grandmother.

Nilraya won the White Elephant Prize in 2017 for Siamese Smile which portrays Thais united in wearing yellow and waiting for the appearance of His Majesty King Bhumibol Adulyadej. Her second White Elephant Prize, Celebration New Year, in 2019 depicts a large crowd celebrating New Year. Her embroideries are praised for their elaborate details and remarkable resemblance to paintings.

Her latest embroidery, Balanced Happiness, is different from her previous works which portray pictures of large crowds. This embroidery illustrates a spectacular mountain view.

"I created this embroidery based on photos that I took while travelling to many provinces in the North including Chiang Rai and Mae Hong Son. The view of spectacular terraced farms on mountains was of Mae La Noi District in Mae Hong Son. I chose this view because it is a nature-rich environment and villagers were friendly and helpful in finding me a place to stay. I also added a beautiful temple from Chiang Rai," said Nilraya.

The freelance artist said she has participated in many competitions because they encourage her to improve.

"My embroidery work from earlier years did reflect real people or objects as much as my current embroidery work does. I have worked hard and now I can embroider portraits, objects and natural views and they look real," said Nilraya.

Nilraya worked as a graphic designer in Bangkok for two months and was not comfortable with the competitive life in the capital. She quit her job and is happy to work as a freelance artist which allows her to have some free time to travel.

"Don't spend too much time in the city. I hope my embroidery encourages people to go sightseeing. People should spend more time with nature. When I was at Mae La Noi village, I felt happy and did not need anything else. There are many beautiful places in our country worth visiting, especially the difficult to reach destinations. I hope other people can see these places as I have," said Nilraya.

Due to Covid-19, "The 10th White Elephant Art Award Exhibition" can be viewed online at facebook.com/TheWhiteElephantArtAward. Visit tinyurl.com/z8zj2tzk and tinyurl.com/378t6ac3 for more information.