In May 2014, artist Surajate Tongchua was in a bank to pay his bills when the military launched a coup. The artist felt numb realising that the country would be ruled by a military dictatorship again, so he decided to collect receipts from that day to document the negative effect of the coup. He believed his payments for VAT at the rate of 7% were used to support the junta government. After collecting his and his family members' receipts for several years, Surajate started developing his art collection "Priceless" in 2017, which is on view at the new art gallery Manycuts Artspace Ari.

"I did not know what artwork to create at that time, so I began painting abstract art on canvas which I am not good at. Abstract artists create artwork freely but each work eventually has its end. However, the political situation at that time seemed beyond abstract art," explained Surajate.

The exhibition's curator, Lyla Phimanrat, added that the exhibition's title "Priceless" means value cannot be determined and refers to what people have lost under the junta government.

"Everyone has to pay VAT whether they are rich or poor. However, budgets related to education and healthcare were cut. During the pandemic, we wanted quality vaccines, but we did not get them. The government also restricts freedom of speech even in the art industry," explained Lyla.

"If VAT is used for people, our welfare and living standards would be better than what we have now. If taxes are used for taxpayers' welfare, there would be no need to join rallies to urge for better lives," Surajate added.

All the receipts which Surajate collected were put through a paper shredder and the paper strips were used as abstract paintings. Surajate said it was challenging creating straight lines from paper strips because it is a repetitive and boring routine. Below Untitled 2021, papier mache in a vase shape. Nutthawat Wicheanbut

"I intended to put paper in the same straight form to represent frustration, discomfort and unresolvable situations that happen repetitively in Thailand. The lines of the paper strips did not come out straight which represents our vulnerable social structure," said Surajate.

"Priceless" by Surajate is the debut exhibition at Manycuts Artspace Ari. Lyla said she was impressed with Surajate's dedication, so he was selected to be the first artist to exhibit at the gallery.

"Surajate started by collecting his and his family members' receipts which are personal items. However, the message from 'Priceless' is not personal. The collection criticises the country's structure, which is universal. We can take this collection to other countries and visitors can understand it too," said Lyla.

Among the total 17 art pieces, five pieces with the same title, Untitled 2020, are in a form of plant pots.

"Plant pot papier mache was made from blending Chinese newspapers in Thailand, social science textbooks and receipts. Chinese newspapers refer to Chinese-Thai investors who have connections with the government. The social science textbooks have never changed content and aim to promote the cult of personality. I created art pieces in plant pot shapes because when seeing a plant pot, we expect to see something grow. However, we pay VAT, but it is a waste. Nothing is developed from it," said Surajate. 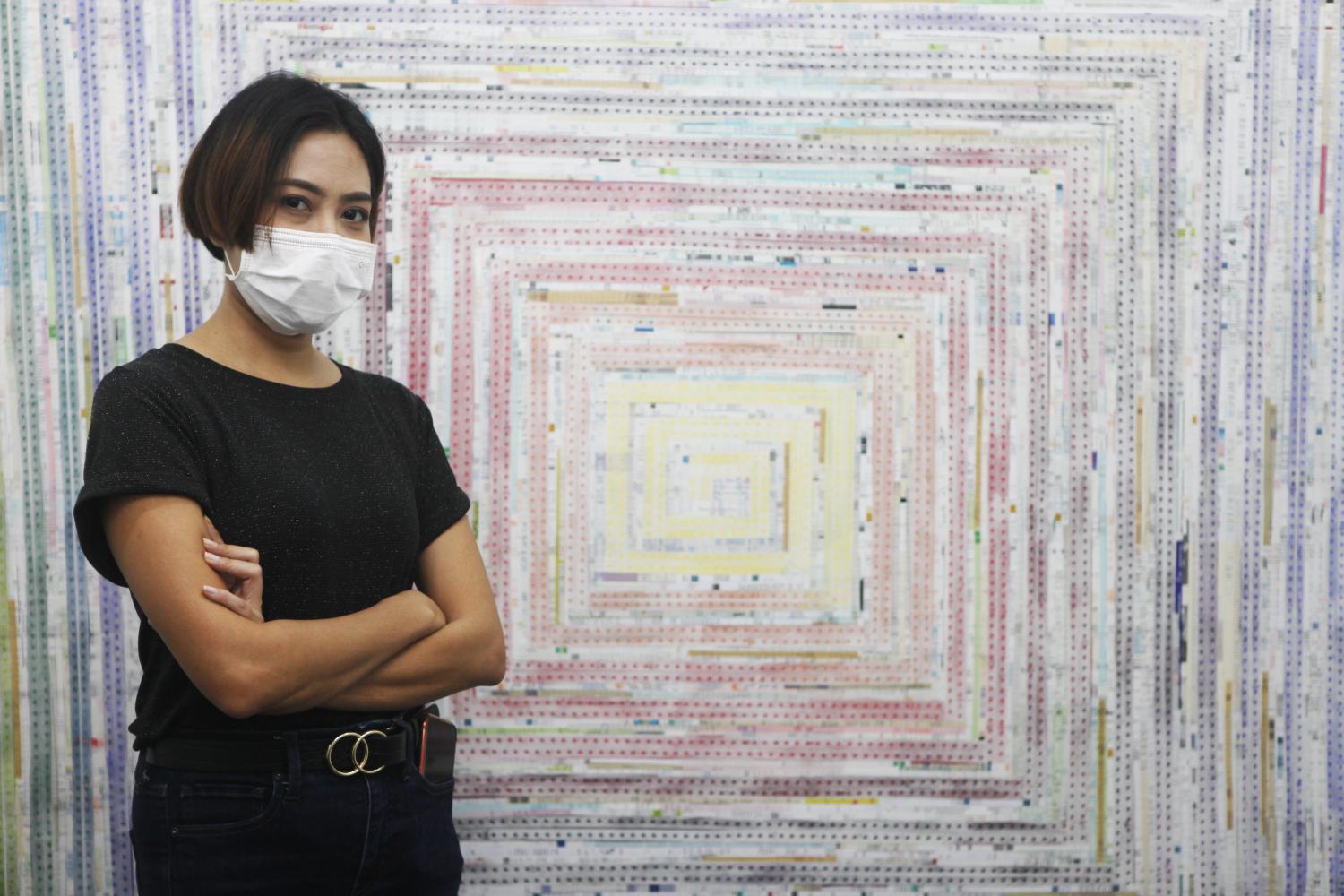 Untitled 2021 is the only papier mache in a vase shape. It is another item meant to criticise business people and politicians.

"The idea was inspired by Chinese traditions in which business people gifted porcelain vases to powerful people to strengthen their connections," explained Surajate.

Most artworks in "Priceless" feature bright colours to satirise the junta government who often say they work hard to make people happy, but people do not feel happy. The acrylic painting and receipt on canvas, Untitled 2019-2021, is the only piece that is a gloomy green colour.

"Untitled 2019-2021 was created when I heard the news about the purchase of a submarine and a rumour about increasing tax on sanitary pads. The image of a part of a submarine is hidden in the artwork and the submarine has the wings of sanitary pads. Since I decided to use green as the visual element to represent the military, this artwork took a long time because I had to collect enough green receipts, which I only received twice a month," said Surajate.

Even though Surajate is particularly interested in issues relating to government policies that affect people and has created several collections to criticise the government, he does not believe that art can make changes in society.

"I do not mean to decrease the value of art, but change does not come directly from art since the power of art is more like education. It is also the duty of artists to criticise issues," said Surajate.

Government supporters claim the junta has done a great job in developing the country in several aspects. Surajate disagrees and has criticised the government for changing the constitution and rearranging the government structure for the benefit of their groups. 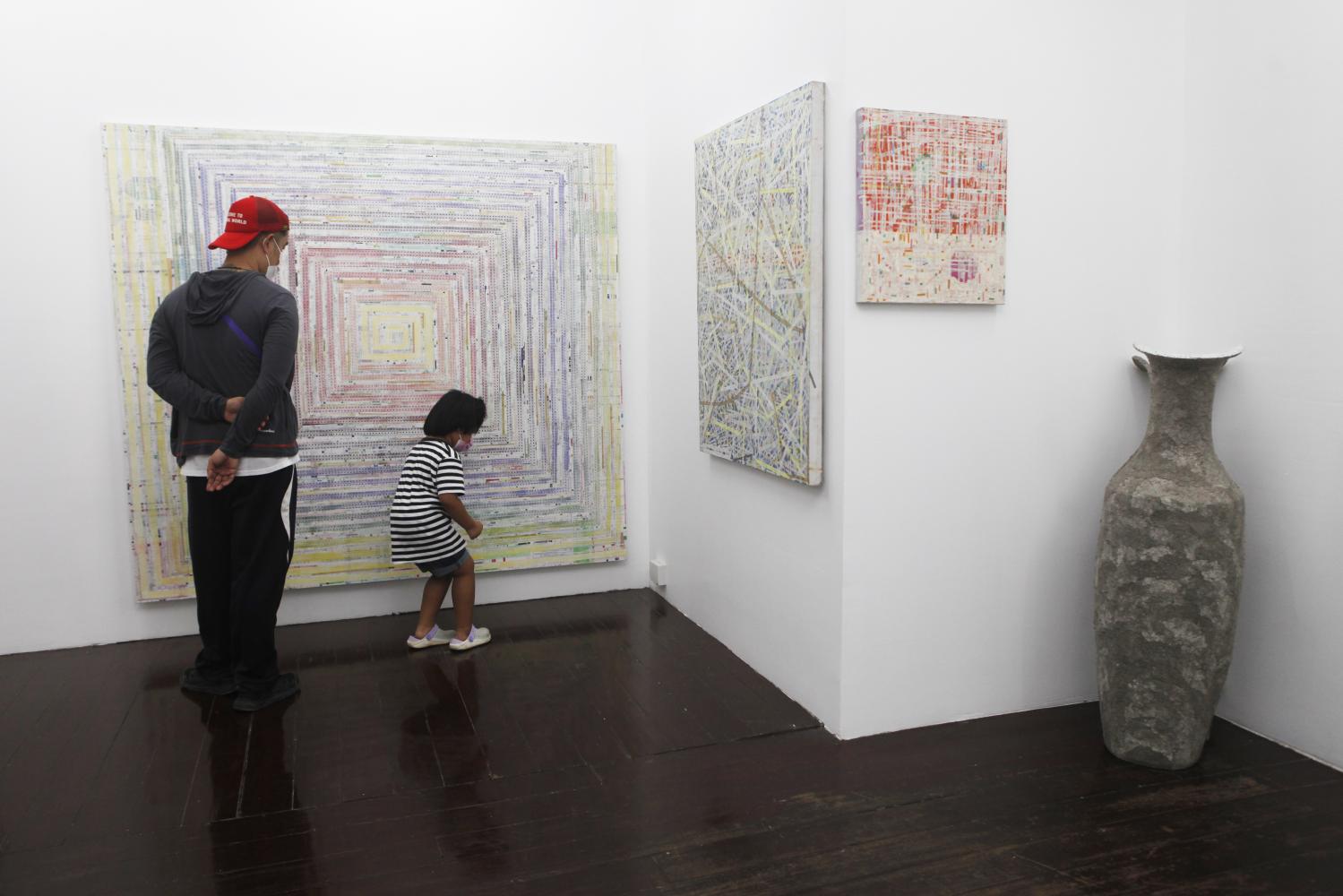 Asked about the expectations of creating the exhibition, Lyla replied she hopes the exhibition will encourage people to discuss the issue. Surajate said the exhibition is just one opinion on the junta government.

"We can use art and effective communication to criticise the government without resorting to vulgar language. In the future, if the new junta government tries to erase any evidence, we have this collection which criticises the country's structure," said Lyla.

"'Priceless' is a viewpoint of mine. I hope visitors will realise that the government needs to provide a way for people to survive in the long term, not just survive on a day-to-day basis. The government must provide something sustainable that we can pass on to our children and grandchildren," concluded Surajate.