The King Of Bangkok is a graphic novel that tells the story of Thai politics over a generation from 1982 to 2012 from the angle of a trio of northeastern villagers drawn to Bangkok. The book aims to subvert more conventional accounts by using fiction rather than "history", by leading with pictures rather than words, and by focusing on ordinary people rather than generals, tycoons and politicians.

In 1982, Nok (Bird) arrives in Bangkok from Udon, one of many teenagers who made this journey in the late 20th century. He soon hooks up with Hong (Swan), a fellow northeasterner but more flamboyant, who becomes his leader through their new lives. Nok works in scrappy jobs, gets cheated, spends time as a beggar, and learns to cope with city folks' prejudice about northeastern migrants. From 1985 the economy lifts on the export boom. Nok and Hong start to make more money and glimpse a better future. They start to enjoy the city, including bars and girls. Nok buys a motorbike, but crashes on travelling back to Udon.

While recuperating, he reconnects to the village and his peasant father, is ordained as a monk for a time, and meets Gai (Chicken). They marry, and she becomes pregnant. He leaves again to earn the means to support his new family. The economy is now at the peak of the boom. Nok joins Hong working on construction projects in the South. He earns good money, but becomes hooked by the constant desire for more and also ya ba (methamphetamine). In the 1997 economic crash, he loses his job and his health, his father dies, and Gai threatens to leave him. Rock bottom.

Nok survives. As the economy lifts after the millennium, these three birds are back in Bangkok. Nok and Hong become motorcycle taxi drivers. Nok likes the flexibility that allows him to commute back to Udon, keep the farm going, and connect his son to their roots. Gai works in retail. Their livelihood modestly improves, and their aspirations soar. They imagine sending their son to university. They benefit materially from the policies of Thaksin Shinawatra and are entranced by his promise of even better and fairer lives in the future. "Finally somebody had noticed we existed." They campaign for Thaksin's re-election in 2005.

They are confused and angered when Thaksin is ejected in 2006. As well brought-up royalists, they are puzzled by the opposition between King Bhumibol and Thaksin, which appears in national politics. They have learned by now that they have to fight for their aspirations. Hong leads Nok into attempts to organise the motorcycle taxi drivers, and then into the Red Shirt movement. In May-June 2010, they are at the eye of the storm in the siege of Ratchaprasong. Caught by sniper fire, Hong is killed and Nok is blinded when a bullet lodges in his brain. When Thaksin walks away from the movement in 2012, Nok says: "The bullet took my sight. Thaksin's betrayal shattered my whole being." 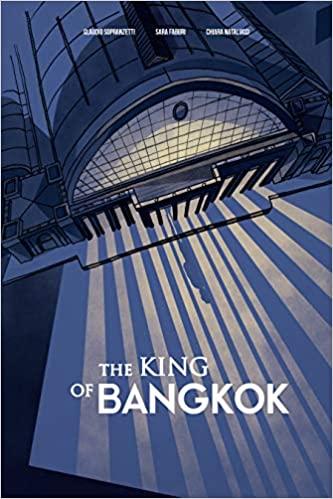 Blindness and sight are the book's axis. The Thai version is titled Ta Sawang, "Eyes Clear And Bright", the Red Shirt slogan about the coming of political awareness. Each of the five chapters has a preface from the time after Nok is blinded. He relearns the city through his other senses -- the cacophony of noise, the smells, the touch of people helping him or bumping him aside, and the anointment of rain. He reflects on the city through memory, recalling his early excitement at its contrast to the village, and his later doubts about its dangers. He concludes: "I had to lose my sight to understand I was just a pawn." In the last few pages, he is visualised inside a box of glass. In the final pages he imagines shattering this glass to recover some simple things -- the smell of ripe rice, a friend's laughter, his wife's gentle strength, and his son's future.

The graphics are mostly drawn in greyscale, with washes of pastel colours, especially blue, creating a somewhat downbeat atmosphere throughout. Pink appears to stress the crises in Nok's life, the motorcycle crash, his rock-bottom point in the South, and the blinding. Red signals the promise but also the danger of politics, which brew in the background through the early chapters, then takes centre stage in the finale, highlighting the excitement and solidarity of the Red Shirts, and then the blood of the final tragedy.

Sara Fabbri's drawings are busy and energetic. Most pages are crowded full. The figures are almost always in movement. Thailand was utterly transformed in the period covered by the story. The graphic style conveys this pace, and its disorienting impact.

Apart from the three birds, the main character in the story is Bangkok. In the booming 1980s, a naked Nok is shown sitting among the chaos of new construction rising from the alluvial mud towards the sky. Elsewhere Bangkok is imagined as "an octopus that swallows everything", and sections of the overhead expressways are drawn as the coils of a concrete octopus.

This is a story but not a story. The preface announces that it is "based on real events" reconstructed through "hundreds of hours of interviews and 10 years of anthropological research", and that every frame of the visuals is based on an archive of over 5,000 images culled from Thailand's libraries and archives. Claudio Sopranzetti wrote his Harvard doctoral thesis after being embedded with Bangkok's motorcycle taxi drivers through the climax of the Red Shirt movement.

Conventional history writing often fails to convey how history impacts the lives of ordinary people and how little people have their part in big events. By its focus on the three central characters and by the capacity of pictures to portray warm humanity, this book does a better job. Until the 2010 climax, the political narrative is sketched in the background. The focus is on Nok, Hong and Gai, three birds in the winds of change. They struggle, bicker, curse, misbehave, make mistakes and tell jokes about themselves. Gai evolves from a bit part into a questioning participant in the politics and anchor of the family. She is also the character most beautifully and sympathetically drawn.

The ending is controversial. Rebels who accept defeat and quit the field are a conservative's dream. In fact, as the politics have moved beyond the generation covered by this book, the torch has been passed on, and there is a new story to tell. This book is a triumph.