When greed has no bounds
Life
Arts & Entertainment

When greed has no bounds

Life sat down with the cast of HBO's period drama The Gilded Age to talk characters, costumes and history

Fans of period drama series, especially shows such as Downton Abbey, will be delighted to learn that show's creator Julian Fellowes is returning to the world of high society and bringing us a brand new series called The Gilded Age. The new show is said to be an American version of Upstairs Downstairs that once made Downton Abbey successful. The Gilded Age saw early buzz thanks to its unbelievably stacked cast, beautiful costumes and set. The show recently premiered its first episode last week on HBO Go and new episodes are expected every Tuesday.

The nine-part drama series is set in 1882 as the United States is entering its heyday -- a time of major economic transformation. It is a time of great conflict between "the old way" and "the new system", with opportunities to make or lose fortunes. The show takes you through these upheavals through the twists and turns in the story of Marian Brook (Louisa Jacobson), a young woman who moves from Pennsylvania to New York after her late father's death to start a new life with her wealthy estranged aunts Agnes Van Rhijn (Christine Baranski) and Ada Brook (Cynthia Nixon). However, Marian accidentally gets involved in a social war between her aunts and rich neighbours George (Morgan Spector), a railroad tycoon, and his ambitious wife Bertha Russell (Carrie Coon). When life leads her to the intersection of the modern era, will Marian follow the rules of society or choose to create her own path?

Joining the massive cast are English actor Blake Ritson as Oscar, Agnes Van Rhijn's charismatic son who does not return her adulation, and American Horror Story actress Taissa Farmiga as Gladys Russell, the naive daughter of Bertha and George who is determined to marry a man who will provide the family with the right connections. At a recent online roundtable interview with the cast, Life got a chance to speak with Ritson and Farmiga who told us about their roles and experiences working on the historical drama series. 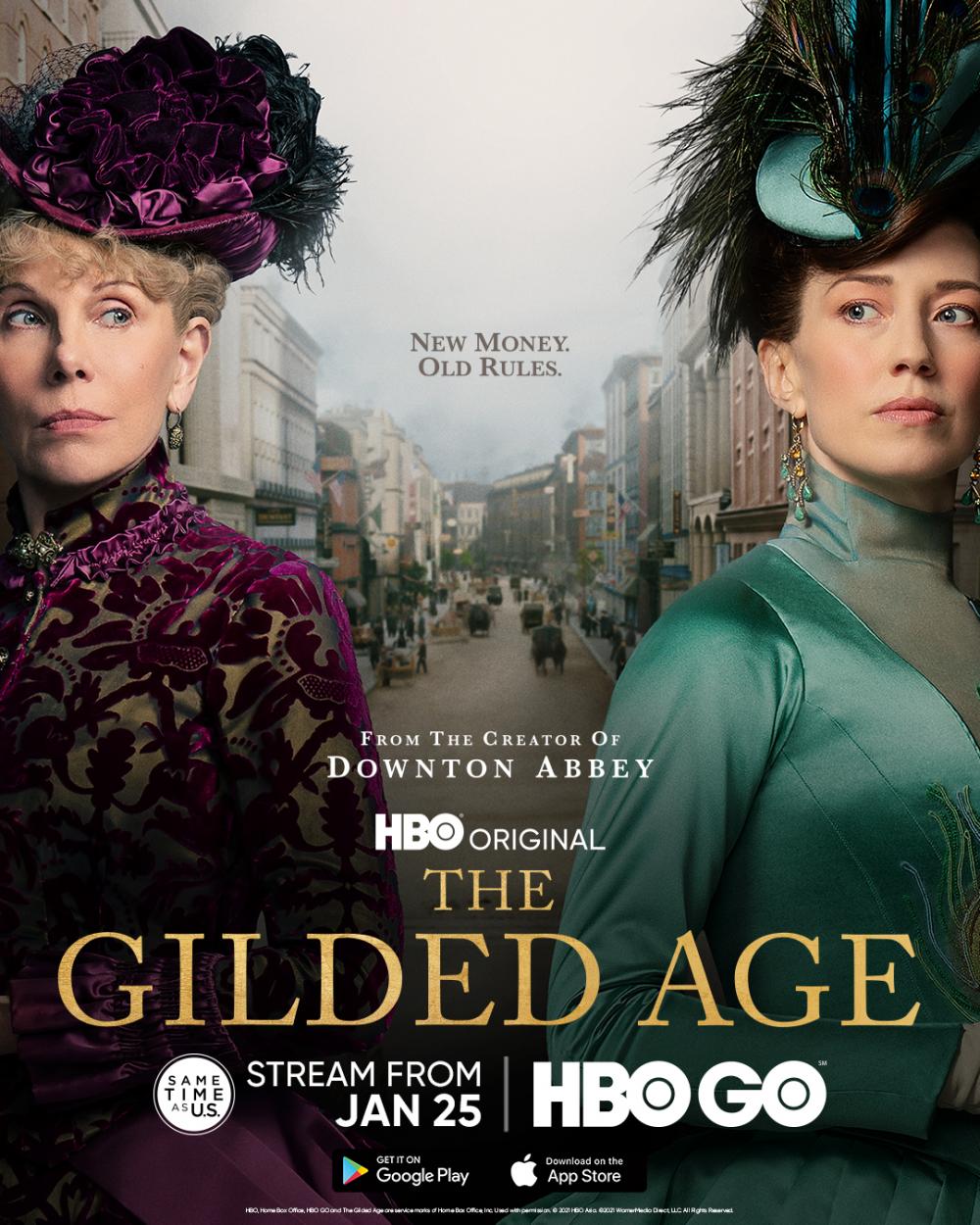 Were you aware of Julian Fellowes work prior to the project? Also, were you fans of Downton Abbey?

Ritson: Yes, I certainly loved Downton Abbey. I love a lot of Julian's work from before like Gosford Park. I thought it was fantastic. So one of the certain senses was that we're going to be stepping into at least a certain kind of delicacy and nuance in the writing, which was exciting. I think that the performances in Downton Abbey were fantastic. I think he has a knack and way of getting the right actors for very specific roles and writing for them as well.

Farmiga: Yeah, I'd seen snippets of Downton Abbey when I was younger, but I remember it was a huge hit among all my friends. Everybody was talking about it, but I wasn't a big TV person back then. I was always a big reader. It wasn't until I heard about the project that I started the process of auditioning, and since I needed to get a better idea of the project, I started watching Downton Abbey. I remember finishing three seasons in no time and I was like, 'Whoa, how does the time pass? How do you get sucked in so easily?'. Although it wasn't a world I was familiar with, I loved it. I wanted to learn about this time which felt so foreign yet at the same time had universal themes and relationships between characters that feel like could happen today if they weren't wearing those insanely gorgeous costumes. 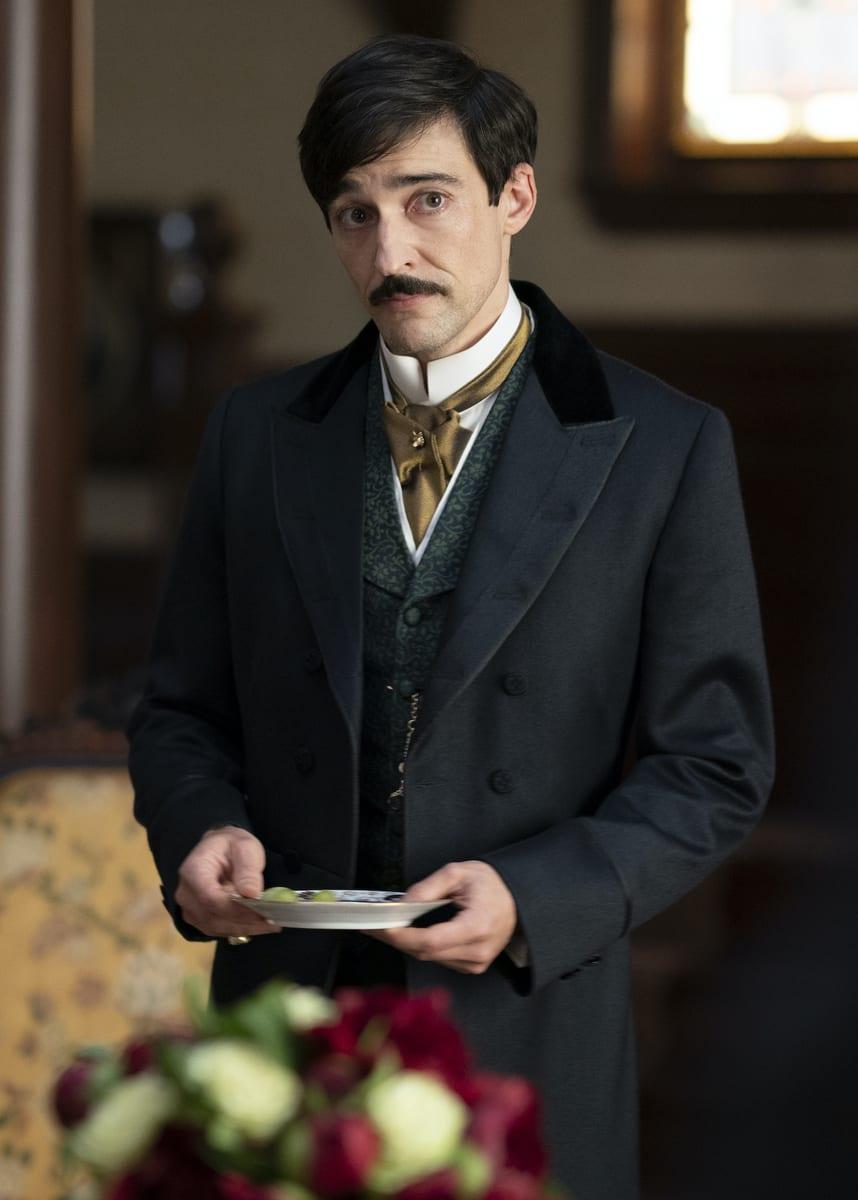 Blake, your character Oscar Van Rhijn is quite a handful. He isn't exactly a likeable person yet still very charming and one who people want to be around. Can you talk a little about your character and all the many layers he has?

Ritson: That's a very good encapsulation of the dichotomy of the character. On the one hand, he's incredibly gracious, good company and charming, but I'd say he's also amoral. I think he sees life as a game where you can make up the rules as you go along and he's more interested in being happy than being good. So I love that about him. I think in a world where most characters are bound by constricting morals and behavioural codes, he's one of the few who just chooses not to play by the rules sometimes. I think there's some bravery in that.

As you both are readers and probably familiar with classic literature, did you do a lot of research or read any novels in particular to prepare before going into a period story like this?

Ritson: I remember chatting to director Michael Engler early on and his advice was just read Edith Wharton. I mean, I became completely addicted to her work. I think I had read almost everything by Edith Wharton by the time we started shooting. She's such a brilliant commentator on the minutiae of social life and manners. I did a lot of research as well for my role. There's some great books out there. There's one called Gay New York by George Chauncey, which explores what the underbelly of New York was like in relation to gay relationships.

Farmiga: Well, I had read Age Of Innocence previously, but honestly that time period wasn't something I was naturally drawn to. But I love being an actor and I love to learn. I love absorbing information and putting myself in opportunities where I get to immerse myself, learn and grow, which is what this opportunity was for me. HBO had also put together this amazing historical research book for us. The show's historical consultant Erica Dunbar contributed to it and Helen Bate was the other historian and etiquette coach. They did a lot of the heavy reading of those books even though some of it can be a bit slow and a lot to digest. So I felt grateful to have sort of a SparkNotes version of it and to learn what was needed. I was very grateful to HBO to have put that together. 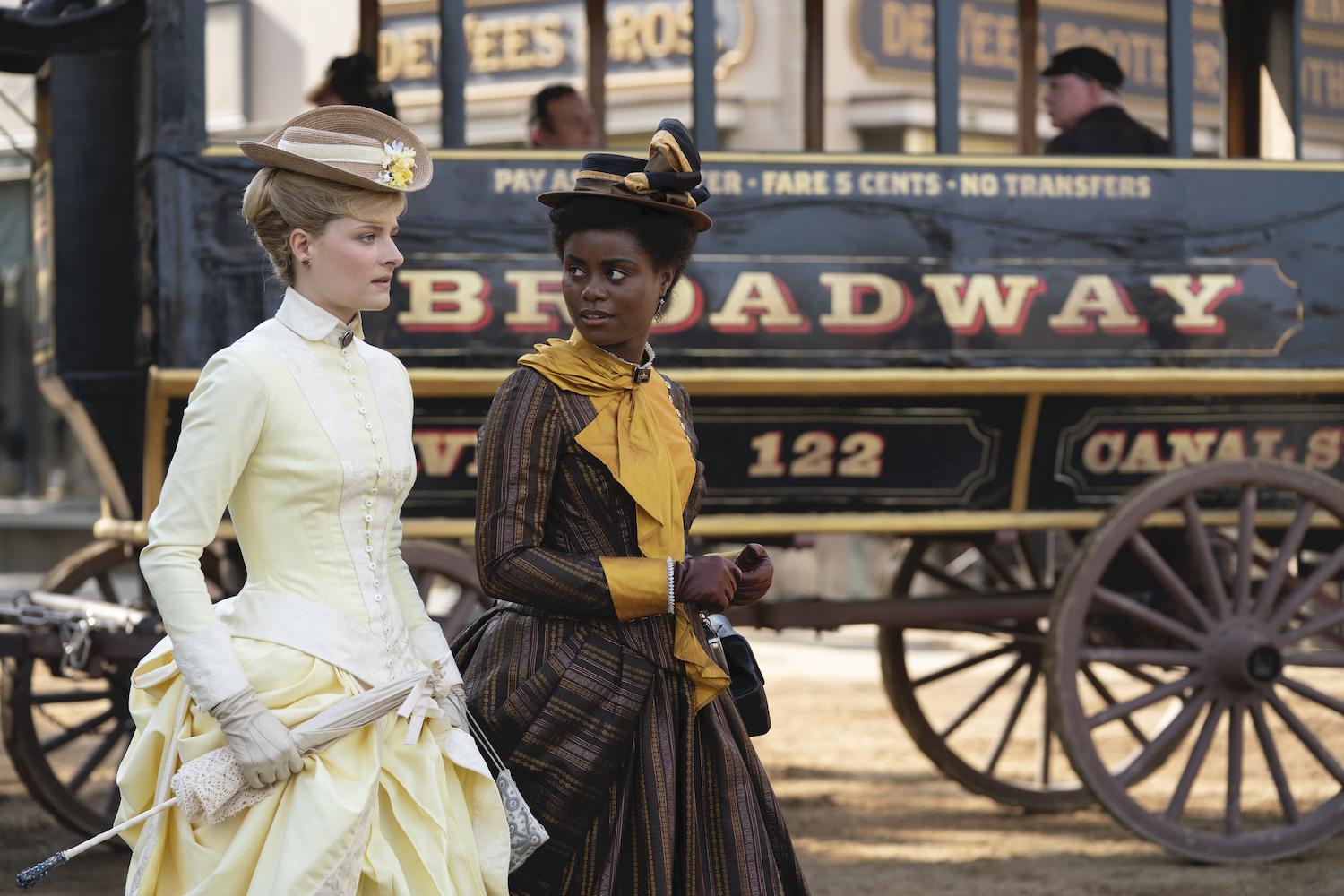 Taissa, what was the most exciting part of working on this project as it's your first time in a period drama?

Farmiga: For me, the exciting part was just being able to experience it. They built these amazing sets, so I was looking forward to just jumping into that world because it's not something that I was familiar with. It was not something that I've read a lot about or love either. A serious period drama is very different from American Horror Story, The Nun or other roles I've done. So as an actress, it was the most exciting thing to step into a world I'm not normally associated with.

Blake, we know you were in the UK series Upstairs Downstairs and other period dramas before. So, I was wondering how you found filming a drama set in America compared to your experience in the UK which has a command over period dramas in general?

Ritson: When you shoot in England, you hold off on a lot of the costs, so this kind of expedited familiarity, which was lovely. Also, moving to America felt like an adventure for sure. The scale was so much bigger than Upstairs Downstairs. It's hard to convey how big some of the sets are, and how extensive. We've built whole streets in 19th century Manhattan and it's amazing. Some of the locations we shot in the Cornelius Vanderbilt house in Newport are just the beyond words. They're extraordinary. Also, the wealth of industrialists at this time was much greater than the wealth of most aristocrats in England and I think it was important to get that on the screen to show the scale and ambition of these individuals. 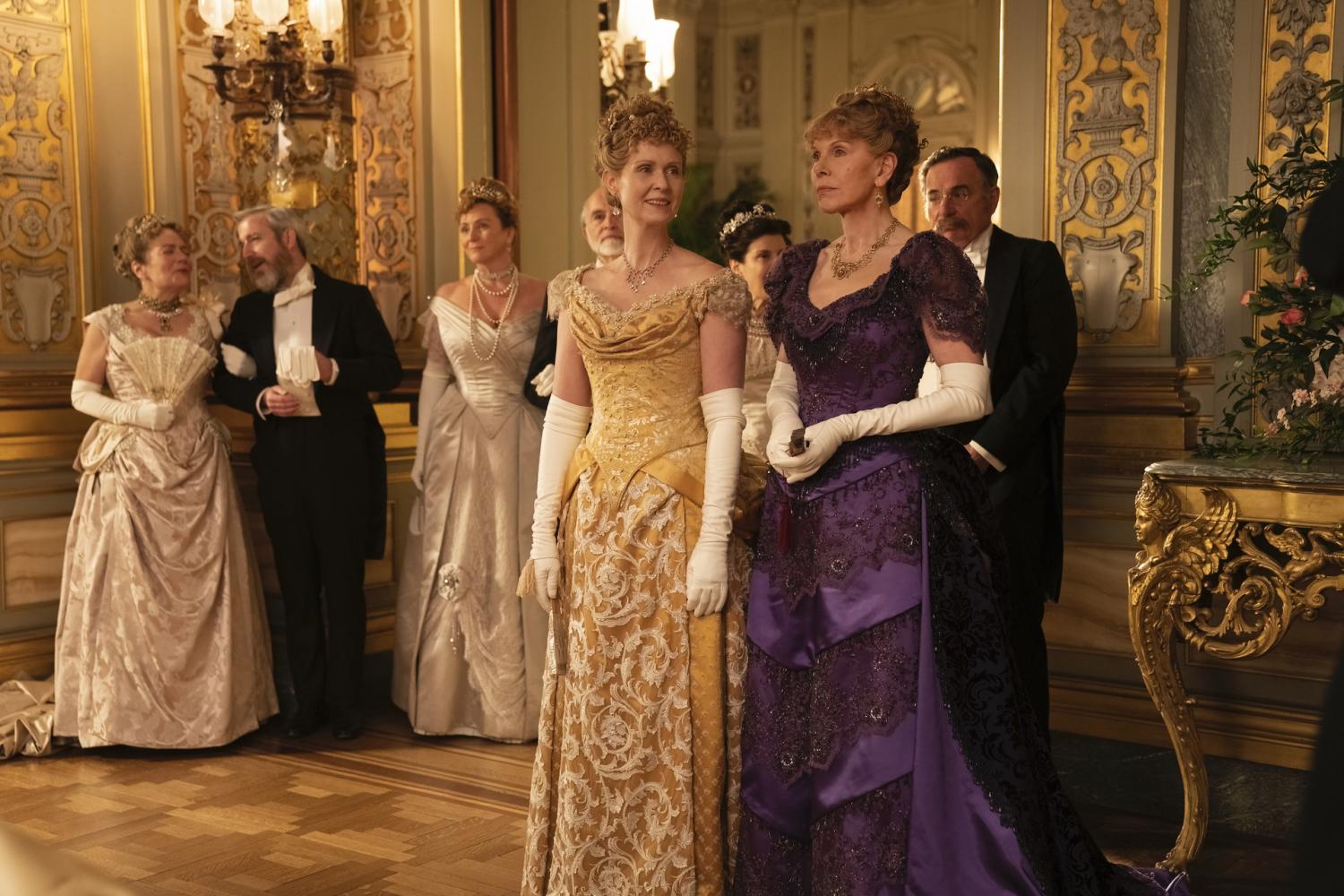 In addition to the filming locations and beautiful architecture, another highlight is the extravagant costumes from the 1880s. Can you guys share your experience wearing them?

Farmiga: Sure. I think one of the most interesting yet frustrating things was that I couldn't get dressed on my own. There's so many pieces and layers. I couldn't even put my own underwear on. But that's what really takes you back to 1880s and being just as uncomfortable as the women were back then. My favourite costume? I mean, there's too many. A lot of them come towards the end of the season, which I don't think you have seen yet.

Ritson: The costumes are phenomenal and they're not just beautiful but also offer an insight into who the characters are, their fears and how they would like to be perceived. For example, in the evening, the men would wear these very starched white shirts which kind of enforced an impeccable posture. For Oscar, they created a special soft fronted variant so I could slouch around the Marian Brooks household. Most of the men also had top hats and handmade humbugs from Italy, which just highlights the level of detail.