Beauty of the unseen

Most artists create their artworks by focusing on the visual aspect of what each object looks like, but olfactory artists are different since they create their pieces by using scents as a medium. While olfactory artists are still rare in Thailand, a Thai pioneer of the art form Waruncharat Laaiadsin has launched her latest exhibition "Imperfect II", her second exhibition that includes scents to convey messages and emotions through her paintings. 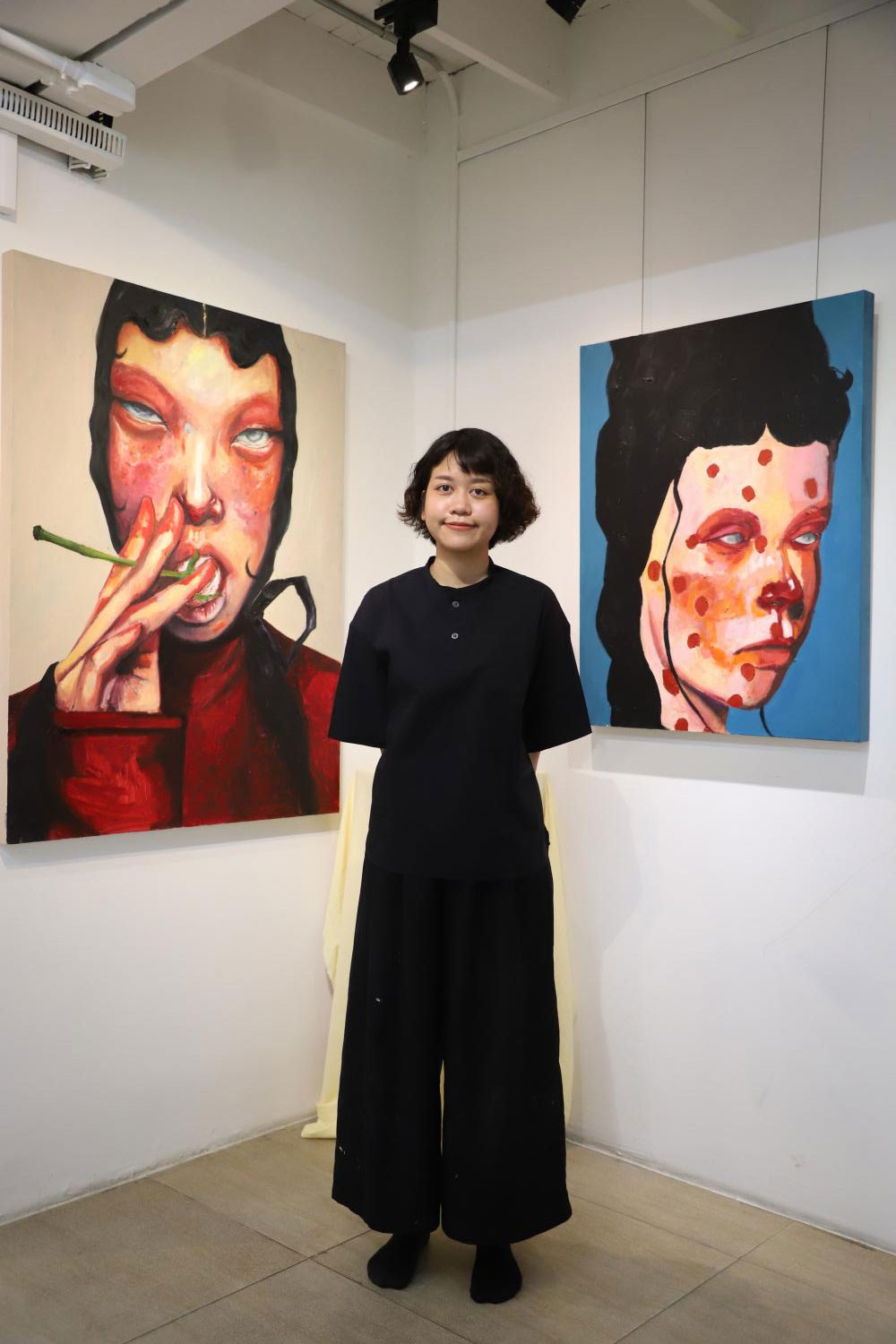 The curator at Kalwit Studio & Gallery, Kit Chirachaisakul, said he was surprised to see olfactory art.

"I really like Waruncharat's olfactory paintings since they are novel, daring and unique. I have never seen artists create oil paintings accompanied by scents as she did. I am also impressed with her idea for her exhibition, 'Imperfect', which was created especially for the visually impaired. For this exhibition, 'Imperfect II' is distinctive, stylish and dimensional. Waruncharat designed each scent to specifically accompany each painting that showed her attentiveness towards her work," said Kit.

"Imperfect II" aims to convey to people that everyone can heal themselves from pain.

"I discovered that some people were different from I what expected and that led to disappointment. While I was feeling down and out, I came across a book, Kintsugi, written by Spanish psychologist Tomas Navarro. He wrote, 'Don't feel ashamed of your scar. Don't cover it up, don't hide it'. I felt like I was waiting for someone to console me and then, I saw this book. I believe that scars are our experiences; they are our values. Thus, I created 'Imperfect II' to convey that although people experience pain in their lives, all pain can be healed," Waruncharat said.

"Imperfect II" displays 18 oil paintings that focus on faces of women. Viewers can see scars, pimples, blemishes, freckles or spots on their faces. Next to each painting, there is a bottle of perfume that was designed specifically for each painting. 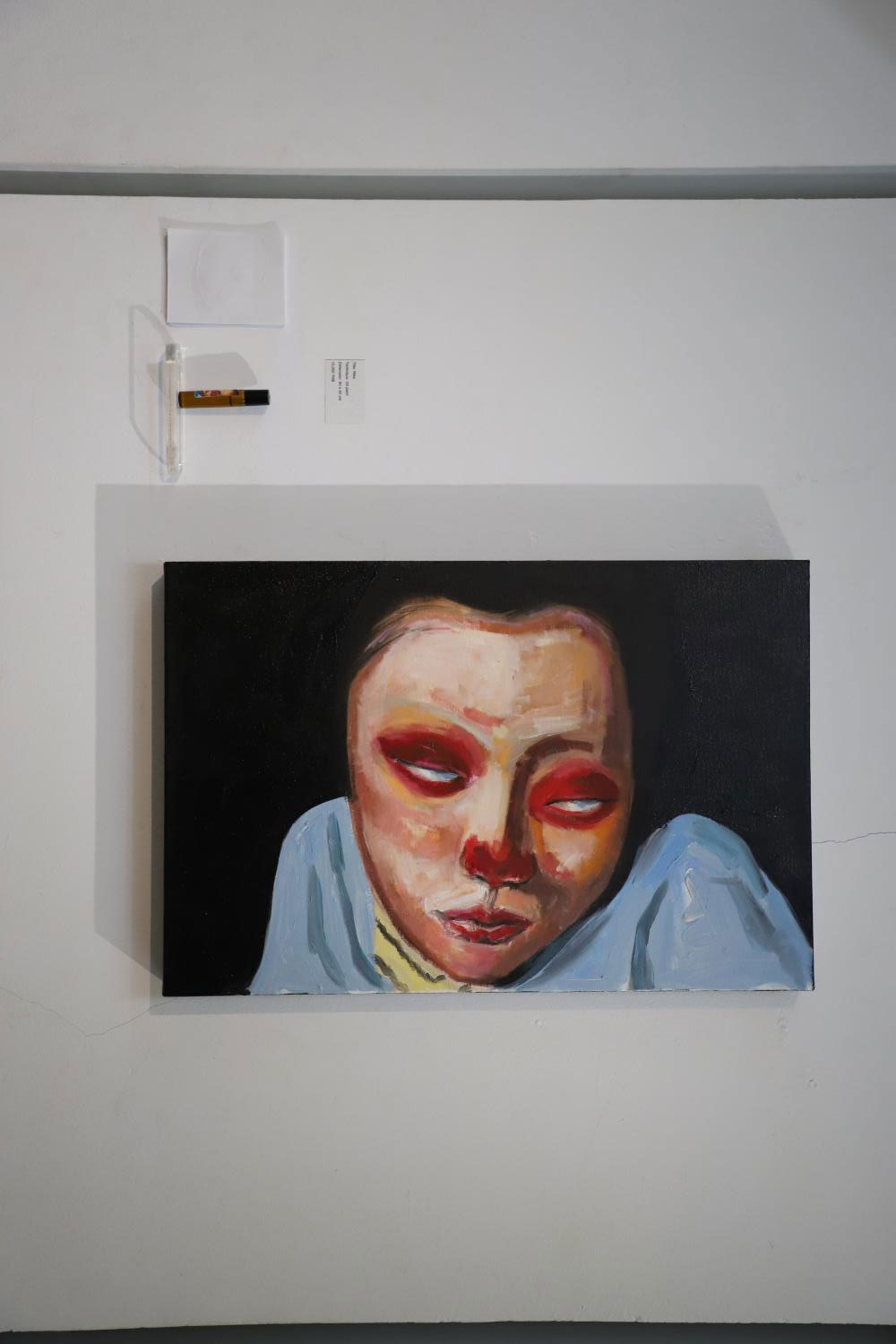 Next to each painting is a unique bottle of perfume.

Waruncharat said that each scent includesd both nice and strange fragrances because everyone has blemishes. Viewers can enjoy the visuals and drop a little perfume on paper strips to experience the scents, as well as touch tactile images that are designed for the visually impaired.

Despite their imperfections, the women in the paintings are intriguing in their own ways. Waruncharat said she had been judged by her appearance before, but she had never taken those criticisms seriously.

"I was teased that I always look like I am drowsy. I have uneven eyelids and people often comment about it, but I do not take their comments seriously. In 'Imperfect II', scents that I created help to make the women in the paintings more beautiful internally. The scents also enhance their image," said Waruncharat.

The 26-year-old became interested in scents as an art student at the Faculty of Architecture at King Mongkut's Institute of Technology Ladkrabang. Waruncharat said she tried to make her work perfect, but was criticised by lecturers for being too stiff and serious. In order to find a solution, Waruncharat decided to try something new and participated in a project organised by The Nose Thailand. The project selected artists to create artwork by working with the visually impaired. 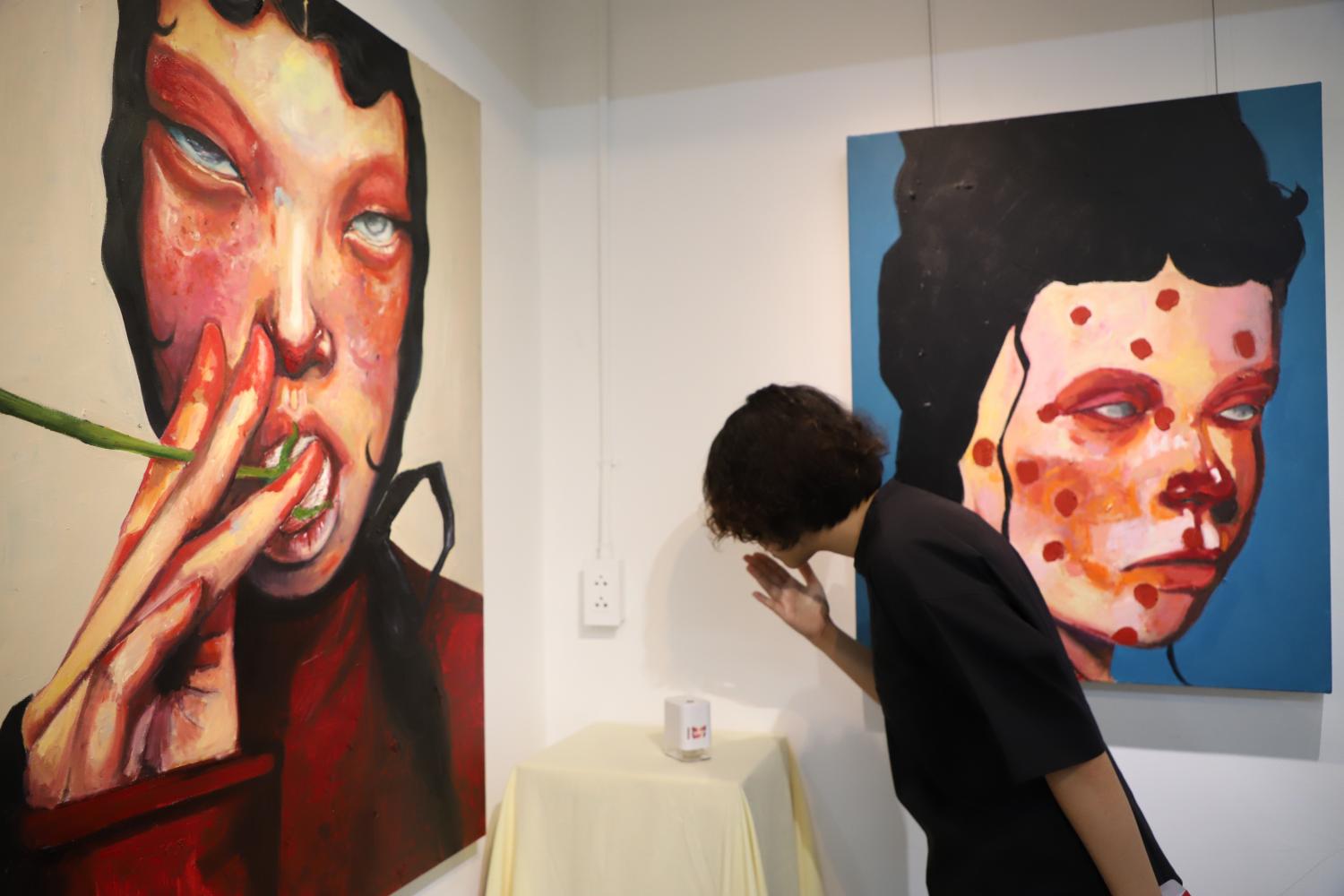 "The project changed me to be what I am now. Generally, artists judge the beauty of their work through sight. At The Nose Thailand project, artists smelled scents and closed their eyes while painting. Those actions totally changed the dimensions of my work. I was initially afraid that I might ruin the painting, but a visually impaired person told me that I should not worry and let my inner feelings connect with my hands. My painting would come out to look like what I had in mind. Hence, I employed some scents to build up my feelings and expressed them through my hands. I was surprised with the results when I opened my eyes because my artwork expressed how I felt," she said.

After the project, Waruncharat wanted to learn more about scents, so she worked as an assistant to a scent designer at Nose Story for three years. She learned that scent is another way to communicate with people. Scents also remind people of certain things.

"A visually impaired person told me that when she smells grass, the scent reminds her of the soil and grass at her house in the countryside. When I worked with Nose Story, we brought people to experience different scents in various areas. For instance, on Song Wat Road, people could smell flour from salapao shops and smelled cinnamon from dry herb shops. While walking towards Phahurat Road, people smelled spices," said Waruncharat. 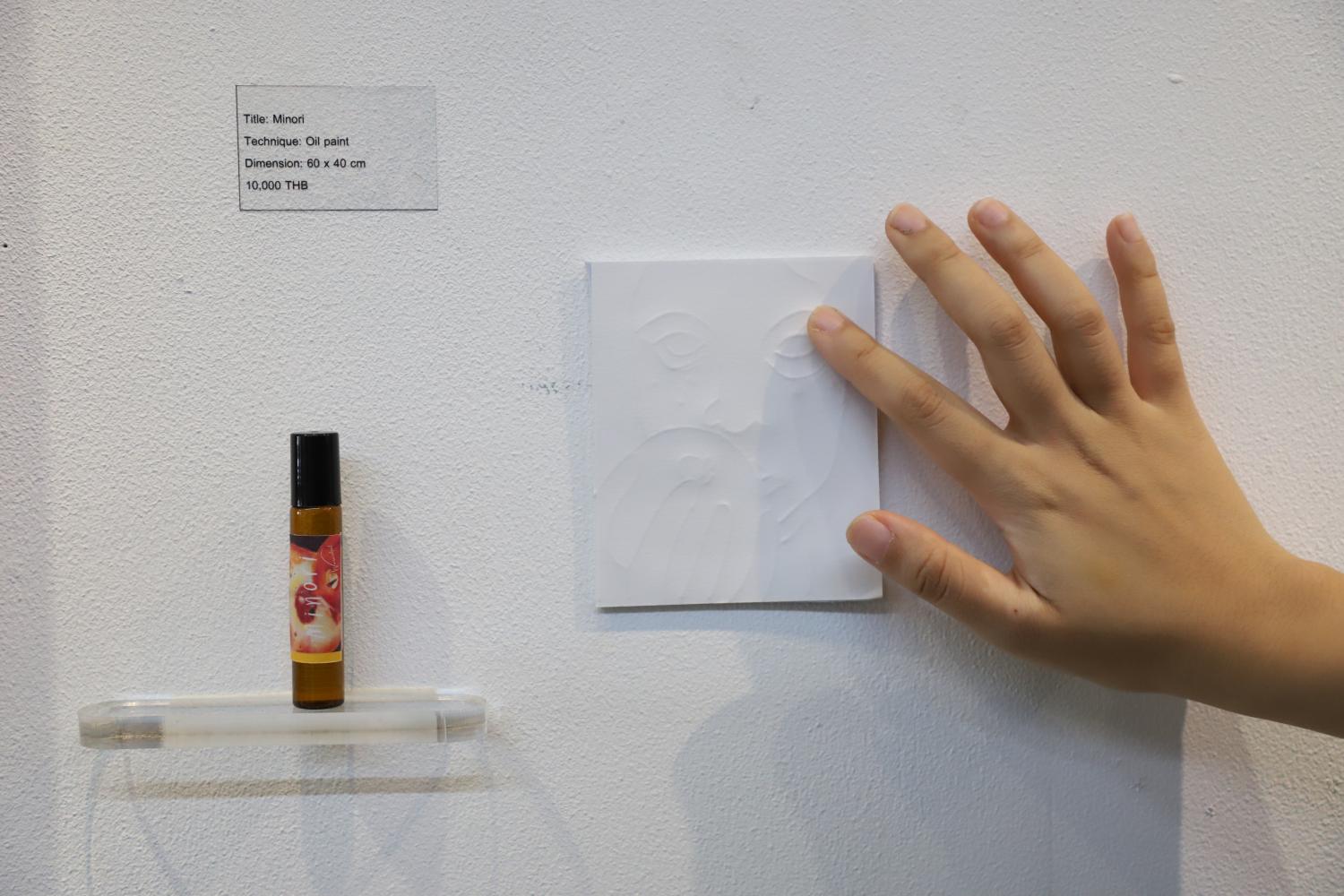 A tactile image designed for the visually impaired.

After Waruncharat learned that nothing is perfect, the artist created her first exhibition "Imperfect".

"I was looking for how to make my work perfect. Instead, there is only imperfection. If I am satisfied and accept what I have, it is perfect in my own way," she said.

"Imperfect" exhibited in 2019 before the Covid-19 pandemic, so it was designed differently from "Imperfect II". At "Imperfect", viewers could touch and smell scents from her paintings directly, but at "Imperfect II", viewers cannot touch the paintings and have to dab perfume on the paper strips provided to experience the scents. Viewers can touch small tactile images that were created for the visually impaired. All perfume bottles are frequently cleaned after they have been touched by viewers. Waruncharat explained that the idea of small tactile images was from a visually impaired person. 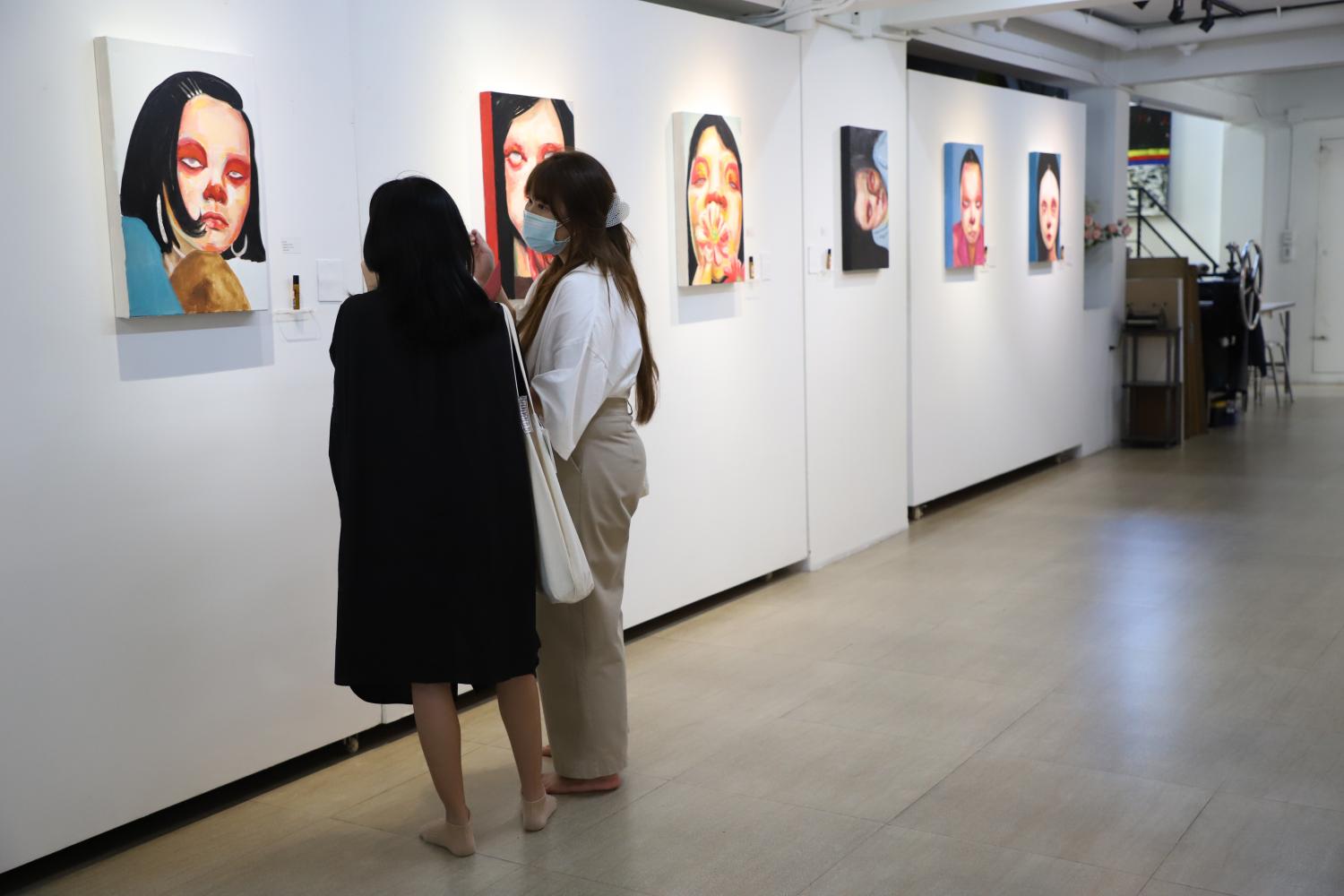 In Thailand, collectors prefer beautiful images. Although Waruncharat's paintings include blemishes and depict atypically beautiful women, she is not worried about negative responses.

"I used to worry that collectors may not like my work. I have heard people mock my paintings. People have different tastes. There is nothing wrong if they think my paintings are scary. After I exhibited the collection, there were people who appreciated my work and said my paintings were beautiful. I hope people visit the exhibition, experience scents and figure out meanings themselves without asking me questions about what memory each scent is supposed to carry," Waruncharat said. 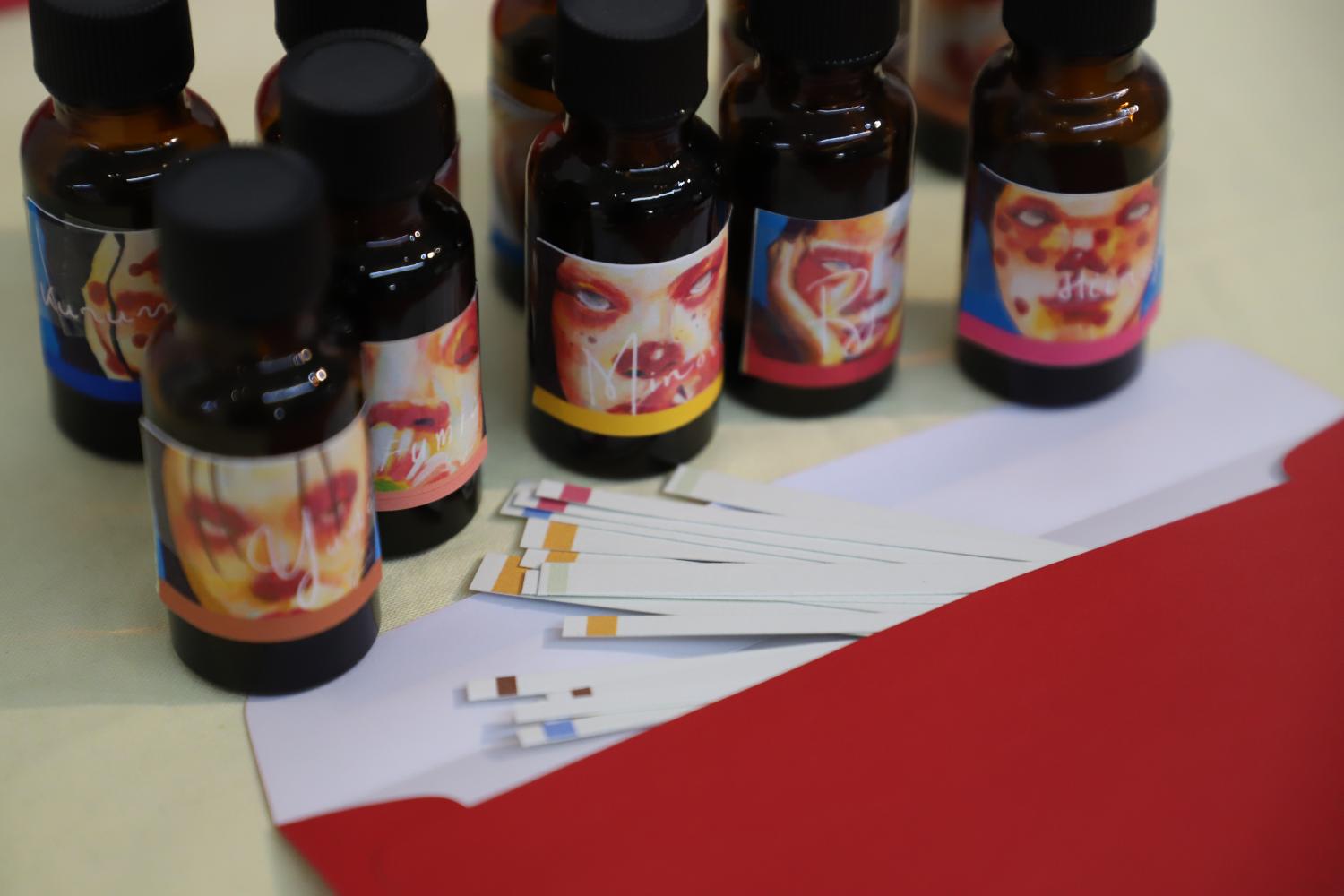 Viewers have to dab perfume on the paper strips provided to experience the scents.